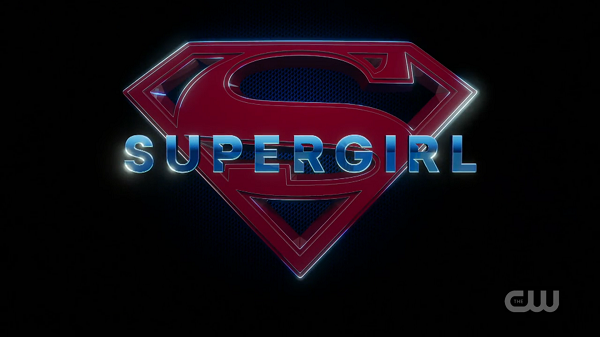 Last week Cadmus stepped up their game and brought in the real Hank Henshaw resurrected as Cyborg Superman.  We also saw what plan Cadmus had for the captured Mon-El, and it wasn’t as bad as I thought it would be. Using Mon-El as bait, Cadmus was able to capture Supergirl, make her temporarily human, and take her blood.  While Cyborg Superman proved to be a powerful adversary for Team Supergirl, they ultimately prevailed. Of course, Hank Henshaw escaped and was able to access the database in the Fortress of Solitude using Supergirl’s stolen blood to learn about Project Medusa.

What is Project Medusa? This episode is going to tell you. 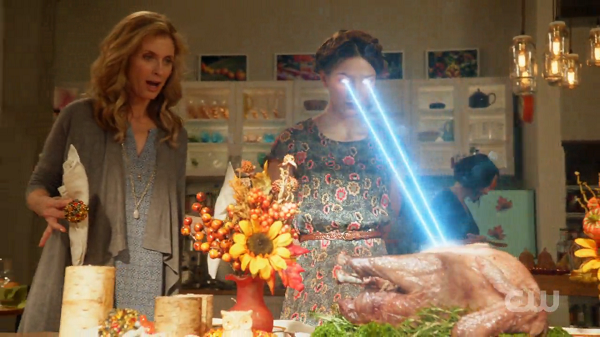 Finally the 4-day DC/CW crossover event is here! To be honest, Supergirl wasn’t as crossover-y as I expected it to be. This was a pure Cadmus episode with tiny sprinkles of crossover goodness here and there.

We start this week celebrating Thanksgiving in the Kara Danver’s apartment. Everyone is there having a good time including Eliza Danvers (Helen Slater) who makes it a point to tell Kara that she thinks Mon-El is into Kara. Well, well, well. Jimmy and Winn decide that it’s time to tell Kara the truth about Guardian, but Alex shoots them down because she wants to tell her mother that she’s gay. We can only have one big news event per family gathering everyone!

As the family gathers at the table for their Thanksgiving toasts, Alex decides is now is the time. Just as she is about to say something, a portal opens up right above the table. Yes! It’s a Flash crossover portal! But sadly no one comes out, because that portal is a big, huge tease.

Over at the DEO, Team Supergirl discusses the rift and the aftermath of Supergirl’s Cadmus ordeal. They are still unsure of why Cadmus would need Supergirl’s blood and they don’t know about Hank Henshaw’s visit to the Fortress of Solitude. Supergirl wants to do a little investigating into Lena’s connection with her mother. Alex and Winn are a little unsure of her sneaky, information-gathering techniques, but they let her give it a go. 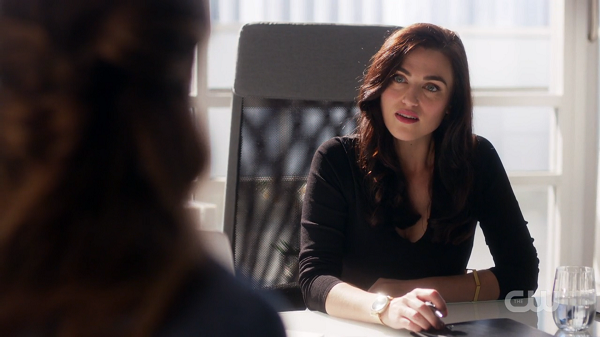 At L Corp Kara plays off her interrogation as a puff piece for Catco. “Women of Power and the Mothers Who Molded Them,” Kara calls her article, but even with all her questions about Lillian Luthor, Lena (Katie McGrath) is unable to provide her with any real answers. It’s clear that the relationship between Lena and Lillian is strained at best, with Lena feeling as though she hasn’t lived up to her adoptive mother’s expectations.  The conversation gets uncomfortable and Lena cuts it short. As Kara walks out the door, Lena calls up her mom. That’s some real suspicious behavior, Lena, real suspicious.

That night Mon-El decides to hang out at the alien bar. The place is hoping with unfamiliar people, except for one hooded figure that looks a lot like J’onn. Placing something under the bar, J’onn makes his way out and Mon-El follows him. 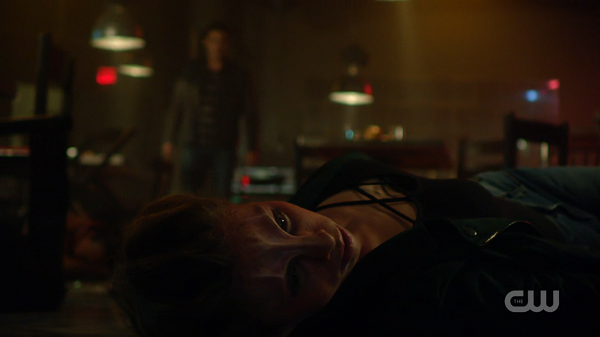 As we all know it’s not J’onn leaving the bar but Hank Henshaw. Revealing himself to Mon-El a fight ensues. As they fight, the item under the bar begins emitting a toxic gas. The humans in the bar start running out while the aliens in the bar fall to their knees, choking on whatever the gas is. After the fight, Mon-El goes back into the bar and sees the damage that has been done.

At the DEO, Mon-El is now quarantined. No one knows the extent of the damage done to him but since he is still alive it could be a clue. Unfortunately this means that Supergirl and J’onn are also stuck in the DEO until something can be figured out. Alex goes to recruit Eliza for help.

Lillian Luthor (Brenda Strong) responds to Lena’s call and shows up at L Corp. The conversation between the two of them is frosty, but Lena wants to know why Kara is coming around asking questions about Lillian. Even though Lillian shrugs it off as nothing Lena knows that something is up. 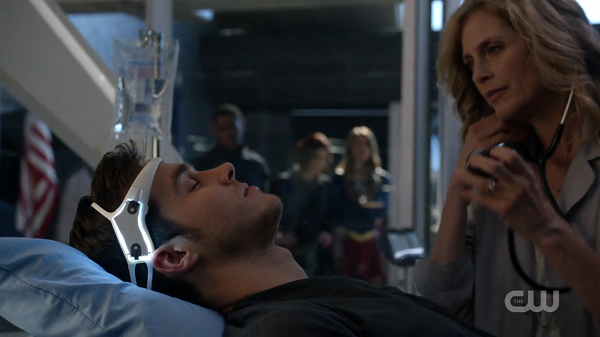 Being under quarantine doesn’t mean you can’t have fun. Luckily for Supergirl and Mon-El Monopoly can take up a lot of time in one’s day. As they play, Kara ever so subtly asks Mon-El if he “likes her,” Mon-El plays if off, but before he can further protest, the toxin that is in his system starts to affect him, leaving him debilitated.

Eliza is able to stabilize him, but he is now infected. In her findings, Eliza discovers that the virus is Kryptonian. Supergirl figures it out: they got the virus from the Fortress of Solitude using her blood.

Once she enters the Fortress, Supergirl sees evidence of someone being there recently. Kelex gives her a hostile greeting, a gift from Hank Henshaw, no doubt.  Kelex tries to blast her, but Supergirl is forced to use her heat vision to destroy him. Tracing Henshaw’s steps she accesses the computer and finds information on Project Medusa from her father Zor-El (Robert Gant). To her shocked and utter disappointment, she finds out that Project Medusa was a weaponized virus created by Zor-El to protect Krypton from alien invaders.

Back at the DEO, Supergirl shares her findings with Eliza, Alex and J’onn. Hank Henshaw has the formula which means that Cadmus can create as much as they want. This is also why Mon-El is still alive since Daxamites and Kryptonians share similar DNA. Alex and Eliza start to work on finding a cure while Supergirl stays at Mon-El’s bedside. 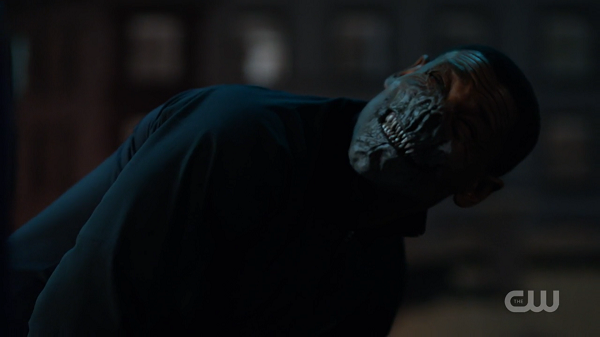 In the lab, Eliza knows that something is up with Alex. Though Alex claims that it is nothing, Eliza sees right through her and knows that Alex is about to come out. Alex feels like she has disappointed her mother, but Eliza squashes those feelings right away and accepts Alex for who she is. It’s a nice moment.

Supergirl is feeling completely disillusioned about her parents. J’onn tries to make her feel better but the White Martian blood cells in his veins causes him to shift for a second, showing Supergirl the truth about what he’s becoming. Before she can fully address what she just saw, Eliza and Alex show up with some interesting news. They know exactly how Cadmus needs to disperse the virus and unsurprisingly, the one component Cadmus needs is located at L Corp. Supergirl immediately leaves while Alex calls in Maggie and the NCPD to meet them at L Corp. 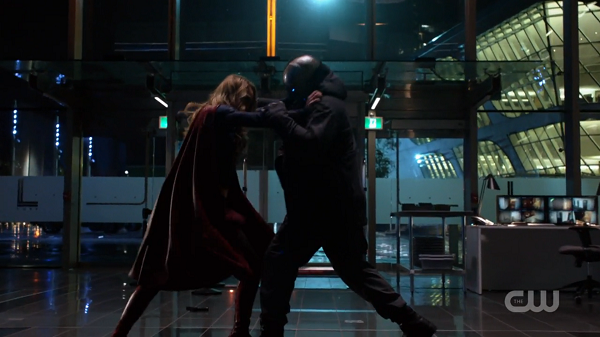 Before Hank Henshaw can get any closer to the much needed Isotope 454, Supergirl stops him. After a short scuffle, Lena appears and Supergirl saves her. At that moment NCPD shows up and so does the crossover temporal rift. The distraction gives Supergirl a chance to get the upper hand on Hank. Hank gets a shot on Maggie which allows him to escape.

Team Supergirl tries to piece together everything that is going on. They weren’t able to get the Isotope so they don’t have a way to make a cure. The information from the crystal pulled from the Fortress of Solitude doesn’t mention a cure. The only option they have left is to ask Lena about her mother.

Flying into L Corp, Supergirl confronts Lena. Supergirl tells her the truth about Lillian and Cadmus and Lena doesn’t believe her. Supergirl makes an impassioned plea for Lena to be her own hero and to really accept what her mother has become. 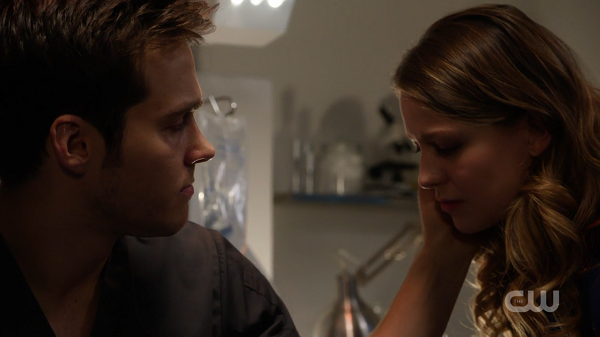 Back at the DEO Alex is stitching up Maggie. Alex tells her what happened between her and Eliza and Maggie is proud of her. Meanwhile Supergirl pays Mon-El a visit. It looks like he is a little better but he knows that he is dying. Supergirl is racked with guilt because the virus came from her father and she is unable to do anything about it. Mon-El does his best to comfort her and kisses her. It’s a sweet moment and for me, Monkara is alive and well. Or should it be Karamon? I think I might go with Karamon.

At L Corp Lena and her mother meet up. Lena knows that Lillian is the head of Cadmus and in a strange turn of events, offers to help Lillian out by providing her with Isotope 454. WHAAAT? 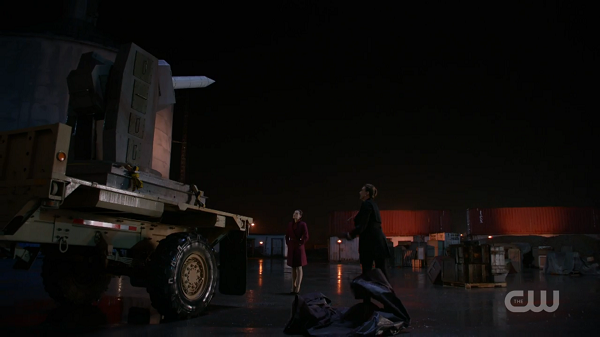 The second the element leaves L Corp, Winn gets a ping that it’s on the move and heading to the Port. This is the best place to disperse the virus. Cadmus issues the final message to the people of Earth about this being the night that the aliens die. Supergirl and J’onn make their way to the Port even though it will place J’onn’s life at risk.

At the port Lillian unveils the rocket that will send the virus into the atmosphere. Supergirl and J’onn show up right as Lena puts the key in to release the rocket. Supergirl flies up to intercept while J’onn stays on the ground to stop Lillian and Lena. Naturally Lillian brought Hank Henshaw with her. J’onn and Hank have a scuffle while Lillian and Lena move to a safer location.

Hank gets the better of J’onn and you think the fight is over, but J’onn embraces his Green/White Martian side and morphs into a rather imposing Hybrid. Hank seems a little terrified at this new monster and tries to fight him off. 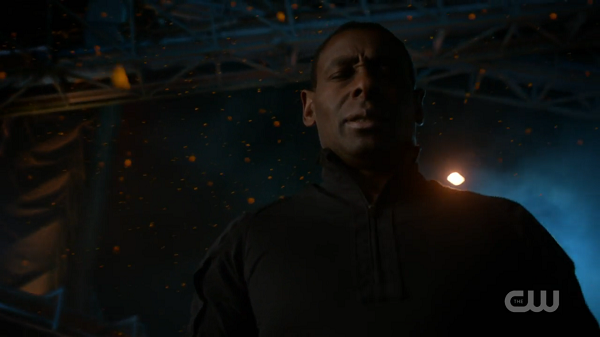 Supergirl catches up to the rocket, but Lillian ignites the rocket, dispersing the virus into the atmosphere.  Right as Hank is about to lay the beat down on J’onn Supergirl comes back and knocks him unconscious. “You may be a cyborg but you are no Superman,” she says. Perfect.

Hank resumes his human form as the virus comes down on him. He braces himself while aliens around National City watch the virus comes down. However, nothing happens. A shocked Lillian wonders why the virus didn’t work and she realizes that Lena switched the isotope rending the virus inert. Not only did she trick her mother, but Lena also called the police. In all the excitement, Hank Henshaw makes his escape one more time. I’m sure that this is not the last time we see him. 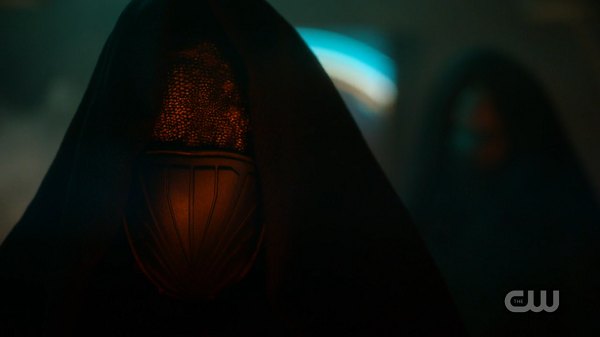 In the end Team Supergirl defeats Cadmus, or, at the very least, Lillian Luthor and her diabolical plan to eradicate all aliens from Earth. But it looks like Mon-El is about to get some visitors of his own. In a spaceship far from Earth someone is looking for him. We don’t know who these masked people are, but they are dead set on finding Mon-El as soon as possible. On top of the Team Supergirl victory, J’onn is cured of the White Martian blood and Alex and Maggie finally hook up. Big wins all around!

Except for Mon-El and Kara. Kara wants to talk about their kiss but Mon-El feigns ignorance about it. Even though Kara says that he drooled on himself, Mon-El knows exactly what he did. I don’t understand why it has to be that awkward between them. 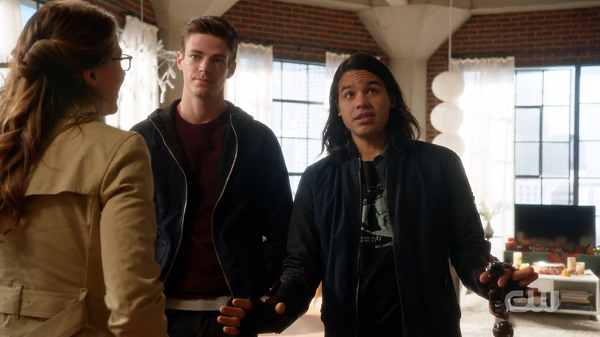 Finally we get to see the crossover action! The temporal portal opens up in Kara’s apartment and Barry (Grant Gustin) and Cisco (Carlos Valdes) jump through. Kara shows up a few second later and they have a very happy reunion. This isn’t a visit between friends, of course, as Barry needs Kara’s help. Help with what you ask? Well, you’re just going to have to see The Flash episode that came out tonight!

Supergirl is on Mondays, at 8pm PST on The CW.