DISCLAIMER: This review of Stranger Things 2 is riddled with more spoilers than the number of times Eleven received a nosebleed from using her powers. You’ve been warned. Prepare to enter The Upside Down and proceed with caution.

Friends, I’ve finally reached the end of my Stranger Things 2 binge spree. Just like any other time I’ve concluded a good binging, a sort of hollow emptiness took residence in my heart. You know, the hole that can only be filled with televised goodness. What’s next? Where do I go from here? Do I resolutely stick with Netflix, or will Hulu hold the key to the emptiness I feel? Well, Stranger Things 2 certainly left a hole. This season transported me back to mid ’80s Hawkins, Indiana while serving up a ferocious dose of nostalgia for a time where I didn’t exist yet. New relationships were forged while old ones crumbled. Brand spankin’ new monsters crawled out of the woodwork. Fearless performers rose through the ranks (Noah Schnapp as Will Byers in particular – but we’ll get to him later) and shone brightly for all the world to see. 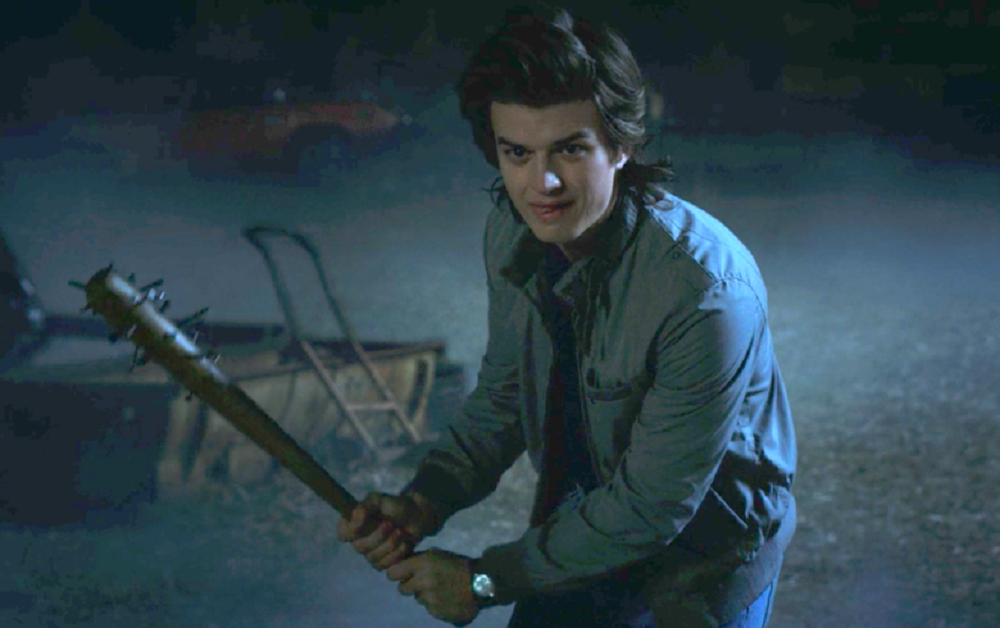 Pictured: Joe Keery. A man and his bat. Still a better love story than Twilight.

Now, Stranger Things 2 managed to keep the tone from Season 1 while simultaneously introducing new elements to the series. New characters, for one, played a vital part in said elements. Sadie Sink joined our favorite ragtag group of teens as “Mad” Max, the cool chick who loves to skateboard and play video games. Her budding relationship with Lucas (Caleb McLaughlin) melted my cold, cold heart. Once again, I’m impressed by The Duffer Brothers and their innate ability to locate new talent. Sink melds right in with our core kids.

Dacre Montgomery takes on the role of Max’s older stepbrother Billy. Billy, in essence, is your typical ’80s villain, whose hair may rival Steve’s for best ‘do. While Billy appeared to be vile (and he most certainly was), we were given a glimpse into his home life and how that affected his public persona. His father was abusive, which contributed to his behavior.

Next, we have the formidable force of nature Paul Reiser as Dr. Sam Owens, who works at Hawkins Lab. At the beginning of the season we see he’s studying Will after his tenure in The Upside Down. Sure, he may seem like a carbon copy of Matthew Modine‘s Brenner. However, Owens ended up helping the Byers clan and friends escape when the lab was overrun with “demidogs” (as Dustin affectionately calls them). Sean Astin also joins the fray as Joyce Byers’ (Winona Ryder) new beau. Bob the Brain is literally comprised of candy and smiles. Also, someone needs to give Astin more work. I missed seeing him on my screen. Anyway, these new characters were not only terrific additions to Stranger Things 2, but they helped move the plot along. They contributed to the story at large in a way that made sense. 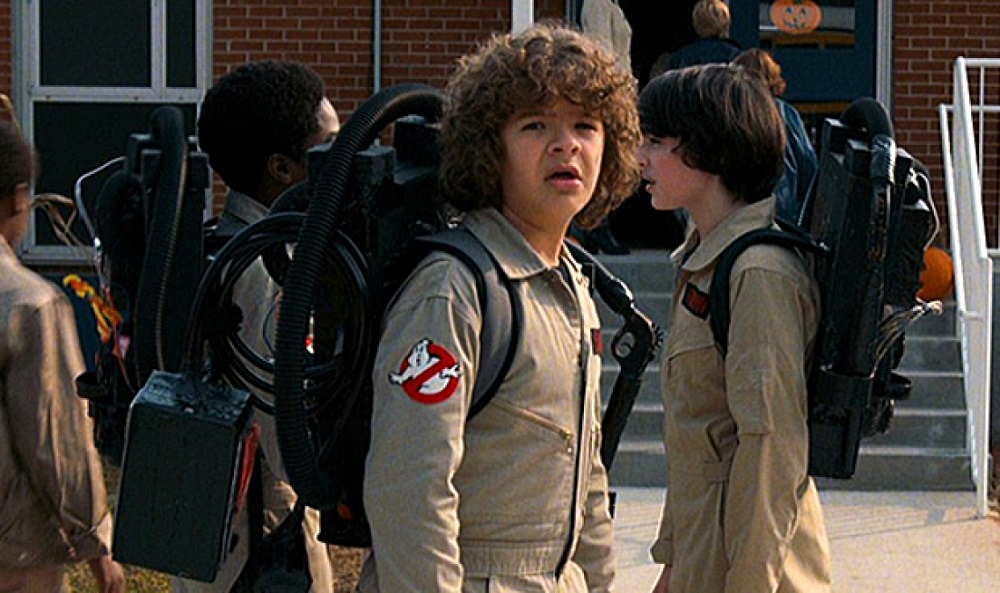 Of course, the highlight of Stranger Things 2 for me is the newly forged relationships. Particularly the “best bros” bond between Dustin (Gaten Matarazzo) and Steve Harrington (Joe Keery). Very much out of left field, but a welcome sight nonetheless. Dustin recruited Steve in helping him keep his “demidog” pet Dart in check, after said pet grew exponentially and devoured his cat Mews (justice for Mews). Well, none of the kids were available to help so Steve had to do. What blossomed between the two was a brotherhood. We know that Dustin is an only child, so Steve filled in the older brother shoes quite nicely. Plus, Steve divulged his greatest and most powerful secret to Dustin – the trick behind his luscious locks. Farrah Fawcett hairspray. That’s true friendship right there.

Now, you can’t mention new relationships in Stranger Things 2 without mentioning that of Eleven (Millie Bobby Brown) and Jim Hopper (David Harbour). We discovered that after the events of the Season 1 finale Hopper took Eleven in. However, he kept her existence from everyone (including a distraught Mike) a secret. This duo forged a wonderful father/daughter bond. Eleven only knew Modine’s Brenner as her “Papa,” but now she could witness what a real father was like in Hopper. Yes, both of them are a bit messy and somewhat broken, but their puzzle pieces fit together perfectly. Not to mention that Brown is an exceptional actress (at only 13!), and Harbour is no slouch either. Their chemistry is off the charts. Plus, I couldn’t help but picture my own relationship with my father. While it’s not quite as tumultuous as Eleven/Hopper, it’s still a special one regardless. 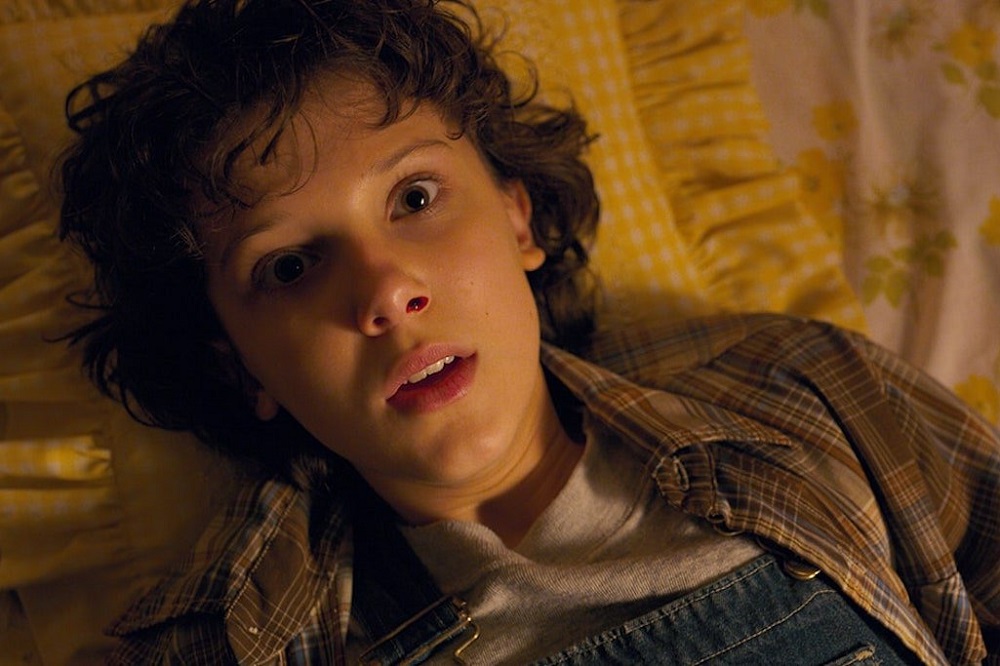 Stranger Things 2 managed to once again hit the nostalgia nail on the head with a great cache of catchy ’80s tunes. While I wasn’t alive in 1984 (established in 1989 over here), I grew up listening to a lot of classic rock courtesy of my dad. It’s the musical equivalent of comfort food for me. The Duffer Brothers also captured the simplicity of that time, when kids could just be kids. Well, minus the impending threat of monsters, of course. Everything from the music to the costumes and the wonderful set design was pitch perfect. Steve’s hair takes the crown for Most Quintessentially ’80s, though.

Now, a few criticisms. Not everything can be perfect, otherwise why would we write reviews? Pacing, pacing, pacing. This is the same problem I had with Season 1. While I appreciate the time taken to develop the story, I really wasn’t engrossed until halfway through the season (this counts for both of them). Of course, Stranger Things 2 had more delightful pop up moments that kept me engaged (i.e. Eleven/Hopper scenes, Dustin scenes). But overall, the story arc doesn’t click until Episode 4. Again, I understand they’re trying to cultivate a slow build, but I believe it’s possible to engage without necessarily relying heavily on action sequences.

Next, Critique Number 2. This one will seem outlandish, but bothersome nonetheless. In fact, I may lose friends (and readers) for this opinion of mine. Oh well – time to jump into the ring of fire. The “Justice for Barb” story line lost me. I didn’t understand the popularity of it the first time. While Shannon Purser is wonderful and I also enjoy her on Riverdale, her character was minor in the grand scheme of things. Plus, Nancy’s (Natalia Dyer) hunt for Barb arc felt like a device utilized to bring her and Jonathan (Charlie Heaton) together. When Nancy and Charlie paid Murray (Brett Gelman) a visit, what’s the one thing he managed to talk about more than Barb? Nancy and Charlie’s unspoken sexual tension. I rest my case. 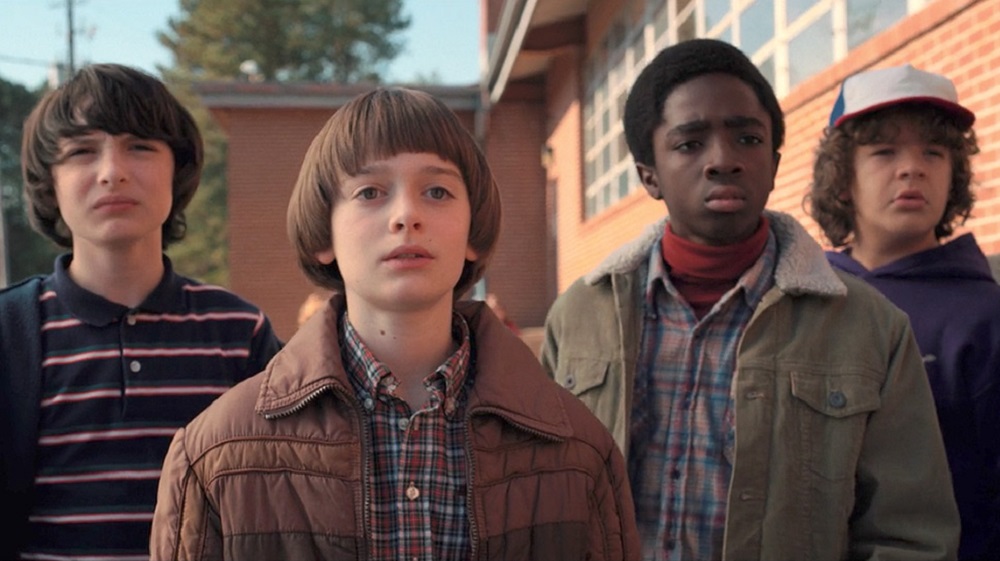 Now, I have to give major kudos to the writers here. The blossoming relationship between Eleven and Mike (Finn Wolfhard) felt completely natural. It tugged at my heart strings, especially seeing Mike call Eleven every day, relentless in his quest to find her. Of course, I could see the tension forming in Season 1, so it only made sense their trajectory was ultimately toward a relationship. And how fitting that everyone found happiness at a Junior High dance. Lucas and Max shared their first smooch alongside Mike and Eleven. Dustin, perfectly coiffed thanks to newly minted older brother Steve, ended up dancing the night away with Nancy. These kids deserve a bit of happiness after protecting Hawkins from The Upside Down.

MVP:  If I didn’t give the MVP title to Noah Schnapp (Will Byers), did I even watch Stranger Things 2? Schnapp, while a minor player in Season 1 (what with being in The Upside Down and all), really took hold of the reins in Season 2. He shone. Now, I had to remind myself he’s only 14 years old. But, he’s an incredible performer and honestly outshone the adults. He was so good at being possessed by an otherworldly monster that I became emotionally and physically exhausted by proxy. Brown is, of course, a close second. However, if I were reviewing Season 1 she would most certainly be MVP. Here’s hoping we get more scenes with these two in Season 3. Then we’ll all implode from the overload of brilliant acting.

In short, Stranger Things 2 was an improvement from Season 1. Personally, I watch this show for the incredibly talented kids and all the fun interpersonal relationships in between. All of the spooky monsters stuff is secondary. Give me that Stand By Me vibe any day of the week. Sprinkle in The Goonies for good measure. Blast all the ’80s music. Give me the escapism I crave. Nostalgia is wildly popular at the moment, given the current state of our world. Stranger Things 2 gives us just that – a heaping helping of nostalgic escapism.