The Strain virus took just a few days to transform the airline pilot into a blood-hungry monster.  The other three survivors are on the verge of the change.  And the dead passengers have risen.  There are strange things happening in New York City.

READ THE LATEST EPISODE OF THE STRAIN REWATCH “GONE SMOOTH”

Ephraim bashed in Doyle’s head with a fire extinguisher to stop him.  The tiny parasitic worms are oozing out of Doyle’s head.  Nora remembers that Abraham said to cut of the head and burn the body.  Ephraim wants to to examine the body first.  They move Redfern’s body to do a full examination.

Jim films the autopsy that Nora and Eph conduct.  They find that his organs have dried up, his genitals are gone, and he has a brand new circulatory system that supports the stinger.  Eph pulls out the stinger.

Nora and Jim get a strong scent of ammonia.  They smelt the same thing on the plane.  Eph suggests that the worm parasite is rewriting biology so it can consume the host and reproduce.

They put the body in the furnace as Setrakian instructed them to.  Jim starts to freak out. He wants to tell the police.  Jim gets so worked up that he tells Eph and Nora his secret.

Jim says a guy named Greg Nelson targeted him at a medical conference and offered him money.  Nelson told him about the box from Berlin.  He paid him to help them get it through customs and that’s what he did.

Eph punches Jim.  He’s disgusted by what Jim did and that he didn’t tell them about it sooner.  Eph tells Jim to go home.  Nora takes Jim’s cell phone with footage of the autopsy and doesn’t say a word to Jim.

Eph suggests they examine another body.   They remember that Gary Arnot said that his daughter was returned to him.  They head for the Arnot’s house. 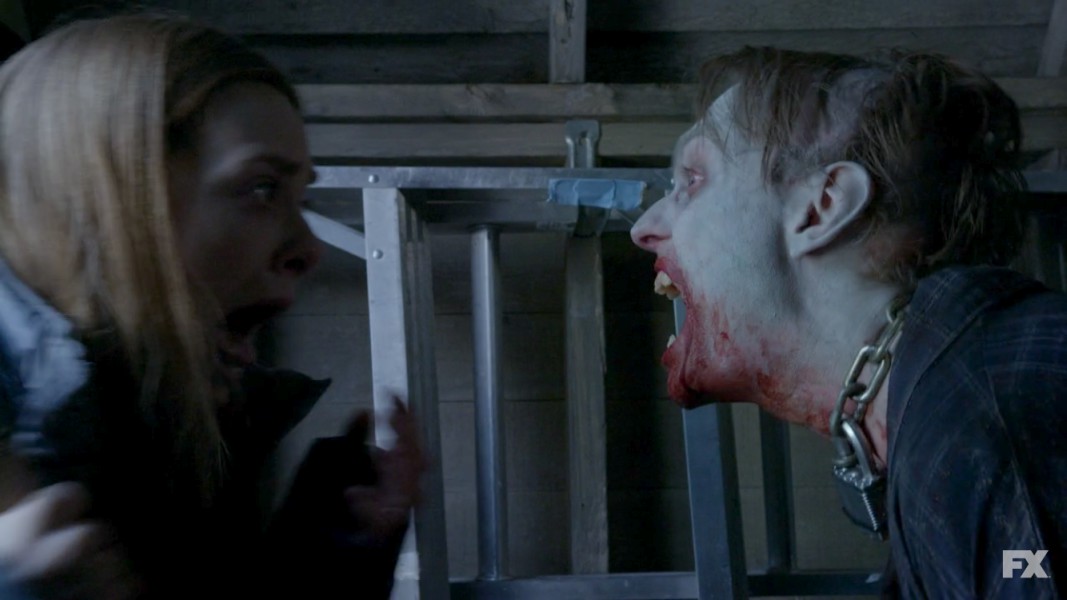 Ann-Marie (Alex Paxton-Beesley) announces that she is taking the kids to her sister’s house.  Ansel (Nikolai Witschl) agrees.  Ann-Marie wants to call the doctor, but Ansel says no.

When Ann-Marie returns, Ansel is nowhere to be found.  She looks outside for Ansel and their dog, Gertie.  She sees a trail of blood and follows it. Ann-Marie finds Gertie’s collar.  And nearby, she finds Gertie…and she’s dead.

Ann-Marie hears something in the shed.  It smells awful.  She knows Ansel is in there.  She opens the door and Ansel jumps at her.  He is covered in blood and has a crazed look in his eyes.  There is a chain around his throat.  Ansel recognizes Ann-Marie and calms down.  Ansel tells Ann-Marie to run away from him.

Gus (Miguel Gomez) gets up from bed and finds his friend Felix (Pedro Miguel Arce) making breakfast.  Felix is Gus’ partner in crime.  He tells Gus about a guy who buys cars.  The last time Gus worked with Felix, he went to jail.  Gus looks at his brother, Crispin (Francis Capra) and he looks ill.

Their super knocks on the door and yells at Guadalupe for leaving her trash in the hall and for not paying the rent.  Gus and Guadalupe look at Crispin. Crispin swears he paid the rent.

Gus steps outside and send his mom back in the apartment. He tells the super to back off of his mom.  He give the super two months rent.  Felix walks out and the super leaves…with the trash.  Gus tells Felix he will join in his adventure.

First, Gus returns the clock that Crispin stole from Abraham Setrakian’s pawn shop.  Setrakian (David Bradley) accepts it, but is not appreciative of Gus’ efforts.

Gus meets Felix at a garage. Felix distracts the parking attendant and Gus steals a set of keys.  They find that the keys belong to a Mercedes and leave the garage.  They take it to Alonso Creem (Jamie Hector).  Felix heard he buys cars for a thousand. When they show him the car, he only offers four hundred. Felix is agreeable, but Gus says no.  Creem ups the  offer to eight hundred dollars.  Gus accepts. 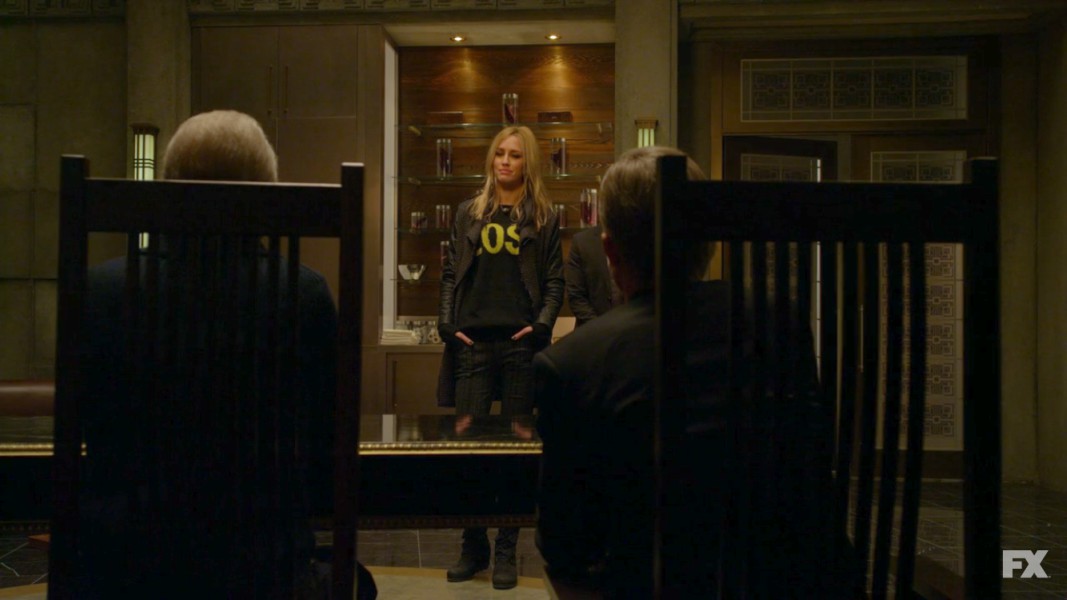 Thomas Eichorst (Richard Sammel) and Eldritch Palmer (Jonathan Hyde) meet a young hacker named Dutch Velders (Ruta Gedmintas).  They want her to launch a hack that stops the internet from working and cut off cell phone communications.  Palmer has a back story all prepared for Citizen United to take the blame.  Dutch says she will do it only if she gets full credit.

Later, Mr. Fitzwilliam (Roger Cross) tells Palmer that the cell towers are not working.  The internet is slower as well.

Palmer meets with Health and Human Services Secretary Maggie Pierson (Maria Ricossa).  He tells her that he got a call from the White House.  A classified biological agent was loose on the plan and the military took the bodies to cover it up.  Ms. Pierson says she owes her career to him and will do whatever he needs.

Palmer starts to say something and then passes out.  When he wakes up, his doctor tells him the new liver has arrived.  Palmer asks about Eichorst. Fitzwilliams says he hasn’t been able to reach him.  Palmer thinks they have forgotten about him already.

Ann-Marie buries Gertie in the garden.  The next door neighbor shows up and complains about the noise the dog is making in the shed.  He also says he found the dog in his yard.  Ann-Marie asks if he hit her dog.  He says he did what he had to do.

Nora and Eph arrive at the Arnot house.  They hear a children’s song playing in the basement.  Emma Arnot (Isabelle Nelisse) is standing by the window in a bloody nightgown.  She turns to face them and lunges her stinger at them.  They fight her off, but she knocks them back. 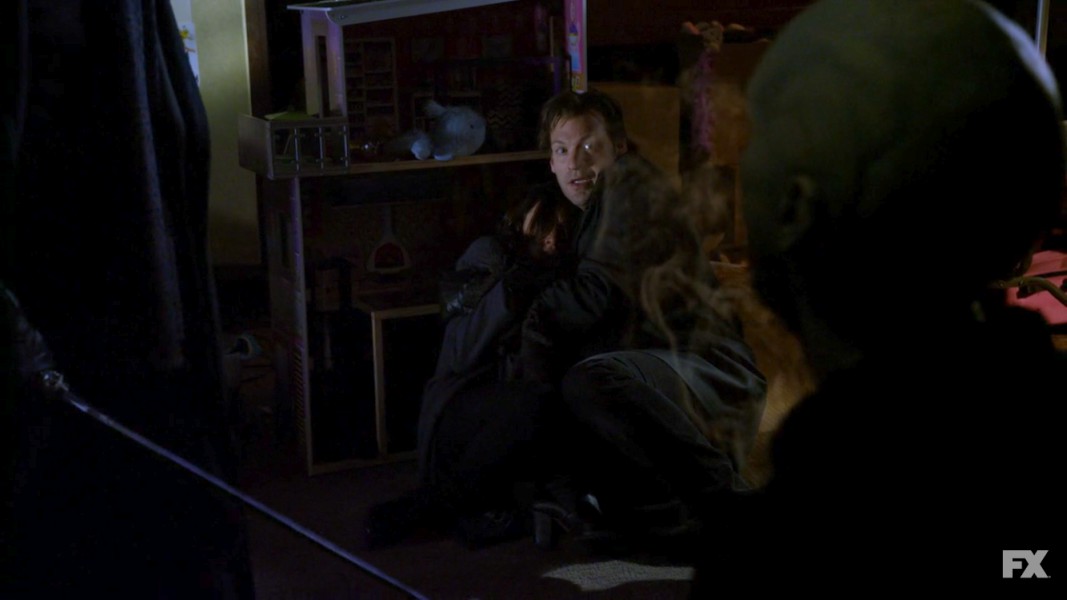 Setrakian steps out of a dark corner and cuts off Emma’s head with a sword.  No one has time to react.  Gary Arnot (Steven McCarthy) arrives and he has completely turned as well.  Setrakian uses the sword to defeat him and cuts off his head too.

Setrakian warns Eph and Nora not to touch the bodies and to stay away from the worms.  He send Eph to the garage to retrieve gasoline.

Nora freaks out. She says she will not be a part of murdering their patients.  Eph tells her there was blood on Arnot. He was out killing innocent people.  He tries to convince her that Gary, Emma, Redfern and all of the people on that plane are no longer people. They are monsters.  Nora is upset and won’t listen to him.

Setrakian says “this is not for everyone.”

Nora leaves and Setrakian says some people can’t adjust to what they are seeing.  He tells Eph to let her go.  Then asks Eph to get the gasoline.

There’s always someone who still thinks of the monsters as humans.  I guess these people have good hearts…no matter how many monsters try to kill them.

The story is progressing as if we are on that Canary team with Eph and Nora.  Of course, we know what’s going on though because of the Palmer/Eichorst storyline.  Things are about to come together nicely and then that’s it!

"#Monolight is by far one of the best in a free to play platformer game I have seen in a long while. With a mix of dark atmosphere and simple to learn but engaging mechanics, this is a must play game."
#f2pfriday #freetoplay #f2p #free2play
https://www.geekgirlauthority.com/f2p-friday-monolight/