THE STRAIN virus has been let loose in New York City. Ephraim Goodweather and his CDC team have been taken off the investigation as to what killed 206 passengers on that flight from Berlin. Everyone believes that the passengers died from carbon monoxide poisoning.

Palmer brought “The Master” to the states from Berlin. We do not know Palmers reason. It may have something to do with the fact that Palmer is dying.  The passengers were all infected with The Master. They have died and risen.  The four survivors are experiencing strange symptoms. What is in store for Eph and his team now that the virus has spread?

CATCH UP WITH THE STRAIN SEASON ONE REWATCH

Thomas Eichorst (Richard Sammel) is different from other men.  It takes a lot of work for Eichorst to look like everyone else. He has prosthetic ears, nose and neck; contact lens, dentures, and a wig. He uses quite a bit of makeup to finish his tailored look. He looks forward to the day he no longer has to hide behind this mask.

The bodies of the 206 deceased passengers are missing. Dr. Ephraim Goodweather (Corey Stoll), Dr. Nora Martinez (Mia Maestro), and Jim Kent (Sean Astin) meet Everett Barnes (Daniel Kash) at the CDC headquarters. Barnes says he thinks the military took the bodies because they don’t want the bodies autopsied. Nora says that what they saw was not from carbon monoxide poisoning. Barnes reminds them both that they are no longer a part of the investigation. It’s no longer disease control, it’s damage control. Barnes tells them to keep the story out of the press. Ephraim asks Barnes why the military would leave four survivors. Barnes doesn’t have an answer.

Jim step away to make a call. He is nervous about what he has done. Jim let the van with the coffin go through security on night zero. 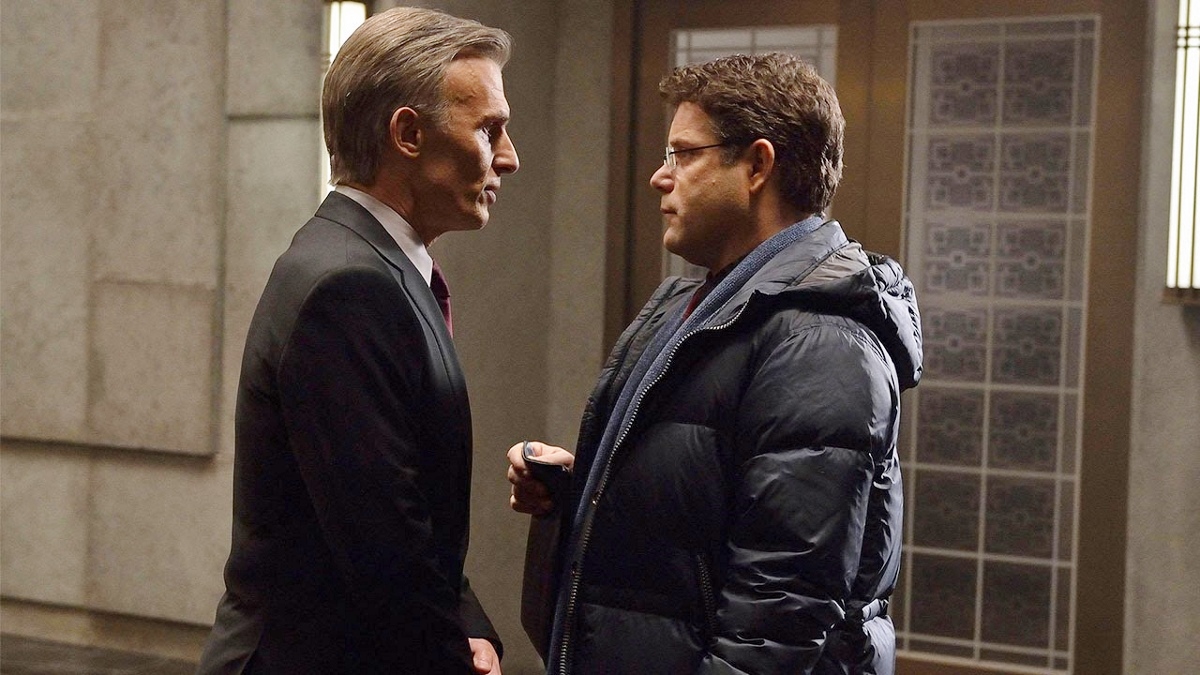 Jim goes to meet with Greg. Eichorst meets him instead. Eichorst knows that Jim let the van through at the airport. He hands Jim an envelope of money. Jim turns and says he’s going to the police.

Eichorst mentions Jim’s wife, Sylvia. She has cancer. Stoneheart makes a drug that could help her. Sylvia was rejected from the drug trial. Eichorst offers to get her in the trial. Jim takes the envelope saying it’s for his wife.

Eichorst tells Jim he now has two bosses…the CDC and him.

Abraham Setrakian (David Bradley) stands trial for trespassing at the airport. The judge is more concerned about the sword that Setrakian carries inside his cane. He promises to melt the sword. The judge dismisses his case.

Nora approaches Setrakian outside the courthouse. He knows that the bodies have disappeared. He says he know where they are going.

Nora asks a lot of questions. Setrakian asks if she has the passenger manifest. He tells her to find every last passenger and destroy the bodies. He tells her she will have to make some hard choices. And until she can do that, she is no use to him.

At the custody hearing, Zach Goodweather (Ben Hyland) tells the judge that he thinks it would be best for Eph if he visited one or two times a week. The judge gives full custody of Zach to Kelly Goodweather (Natalie Brown)

Afterward Kelly tells Eph that he doesn’t show Zach how much he needs him. She tells Eph that he can see him whenever he wants as long as he gives her notice. Eph is angry. Kelly reminds him that Zach did what he thought was best for Eph. 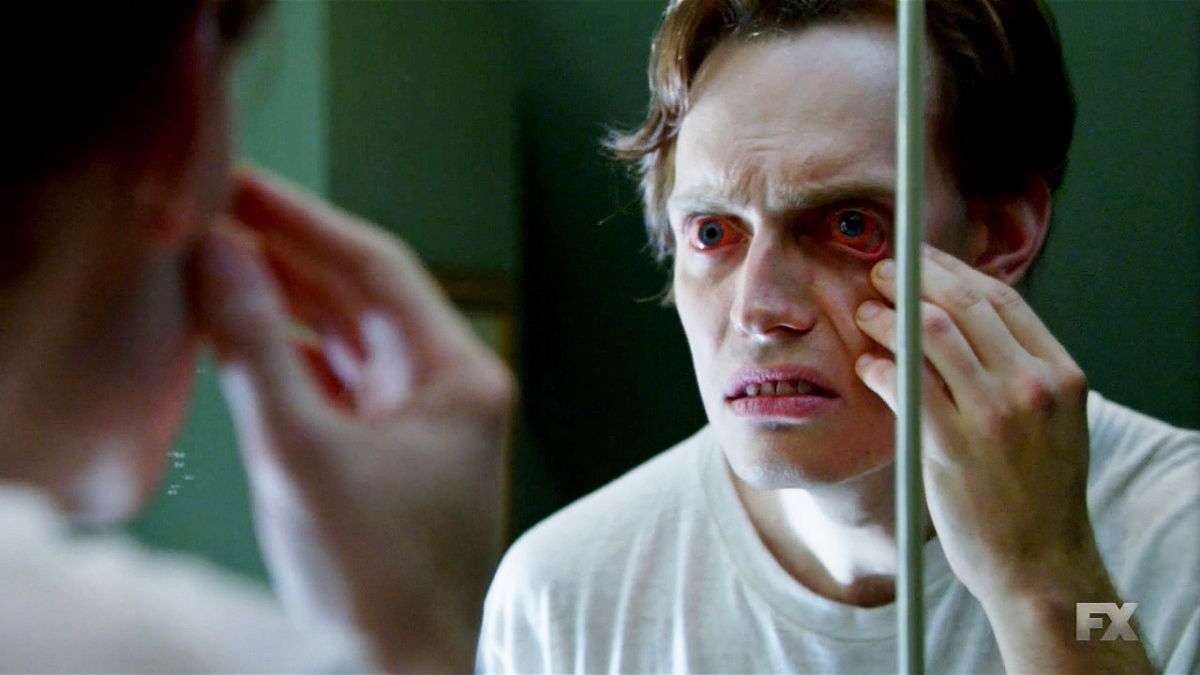 Ansel (Nikolai Witschl) wakes up to his dog, Gertie licking his face. He looks in the mirror and finds that he is going through some physical changes. His eyes are bloodshot and his teeth are sharp.

The press are gathered outside of the Barbour house. Ann-Marie, Ansel’s wife expresses her worry about him. Ansel can’t hear her because of the ringing in his ears. Ann-Marie tells him to go back to bed.

Later, Gertie begins growling at Ansel. His ears are still ringing. He goes to the refrigerator and takes out a raw steak,  drinking the blood in the pan. Ansel looks up and sees Ann Marie watching him.

Bolivar (Jack Kesy) is sick. He sulks as he watches his band rehearse. Ruby Wain (Regina King), his manager, tries to talk him into performing. People are downloading his music since the plane crash and the story about how he bit a girl. Bolivar says he can’t perform because his throat isn’t right.

Later that day, Bolivar’s doctor gives him a bunch of prescriptions for everything that is wrong with him. He shows the doctor his genitals. The doctor tells Bolivar to go the hospital immediately. He refuses so the doctor refers him to a urologist.

That night, Bolivar takes out his contacts and see that his bloodshot eyes are worse. He takes of his wig and a lot of his hair is gone. He washes his face and sees that his skin is gray and splotchy. His whole body has changed. He no longer has genitals.

Vasiliy Fet (Kevin Durand) heads to work. He gets a week’s worth of calls in one night.

Fet goes to the home of a hedge fund trader. His daughter was bitten by a rat. He says the rat bit her because he smelled food on her breath. Fet goes to the girls room and catches the rat. He makes the trader hold the bag while he gives him a history lesson about the building. Before leaving, Fet tells the girl to stop eating in bed.

Outside, he sees a bunch of rats above ground, running from a drain and into the river.

Eph visits Gary Arnot (Steven McCarthy). He finds the airplane wings that Emma was holding on the plane. He also finds the bathtub full of water and hair. Eph gets an urgent call from Nora and leaves. Emma watches him leave from a dark room.

Jim goes home to his wife, Sylvia (Melanie Merkosky). She meets him at the door to tell him she has been accepted in the Stoneheart drug trial.

Doyle is getting worse. Eph looks at his labs and says what is happening is not possible. Eph wants to operate. Doyle hear’s the Master’s voice and says “He’s here.” Eph and Nora scan Doyle with a UV light and the worms are everywhere.

Setrakian pays a hacker to get the manifest of passengers. He says he’s going to pay his respects, starting with Emma Arnot.

Eichorst visits the CEO of Regis Air. He forces him to shoot himself in the head.

Jim shows up at the hospital and tells them about Sylvia’s drug trial acceptance. Their celebration is cut short when they hear that Doyle has disappeared. The team splits up to find him. 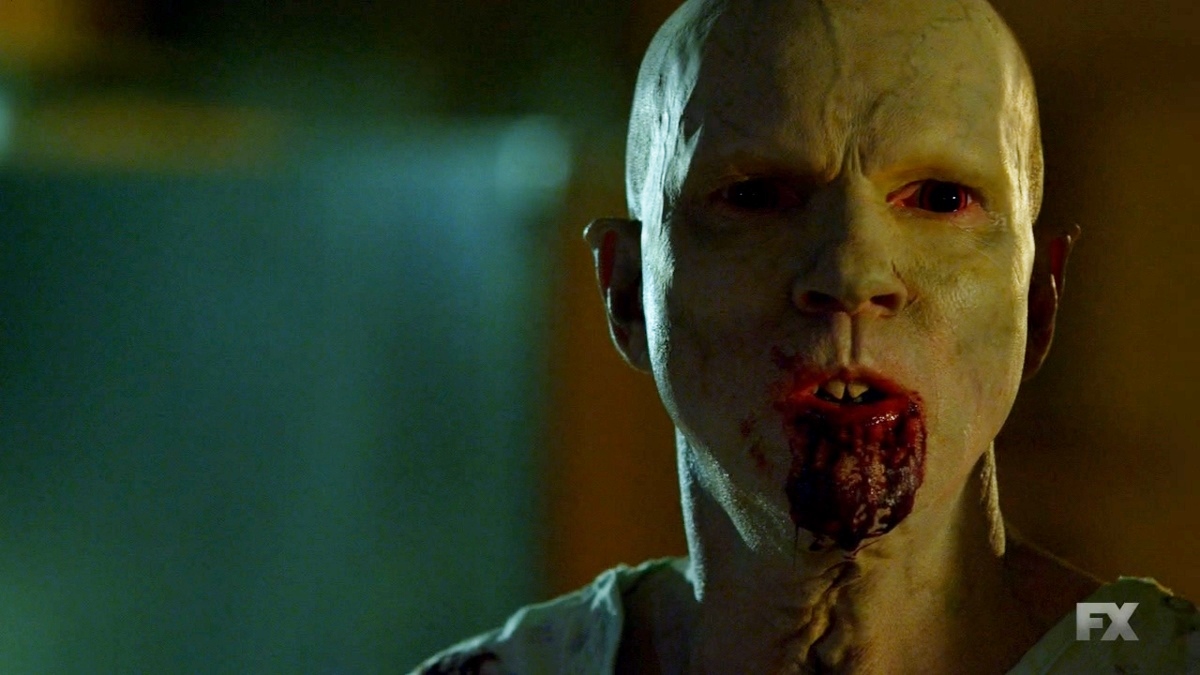 Jim goes to the basement and finds Doyle drinking a bag of blood. Doyle turns around and grabs Jim. He stares at Jim for a minute and someone says Jim’s name.

Nora finds them and Doyle turns on her, throwing her back. Jim tries to stop Doyle and Doyle throws him across the room.

Eph makes his way to the basement. Doyle’s tongue shoots out of his mouth straight for Ephraim. Eph dodges the tongue. Nora tries to ward off Doyle with a UV pole. Doyle grabs the pole with his tongue and flings it aside.

Eph hits Doyle with a fire extinguisher and he falls to the ground. The captain isn’t down long. Doyle jumps up and goes after Nora. Eph uses the extinguisher to bash Doyle’s head in.  The three of them stare at the remains in disbelief.

Now we have monsters.  The Strain has one of the greatest monster creators in Guillermo Del Toro.  His vision comes to life beautifully.  The writers have taken three episodes to show us the transformation. Now that we are here, things are going to get bad for New York City.