It turns out that when Steven (Zach Callison) and Lars (Matthew Moy) were separated at the end of the last episode, they were each taken to separate holding cells. When this episode opens, Steven is pacing his, hoping that whatever punishment is coming his way will happen soon, just to get it over with.

He’s been alone long enough to wonder if this solitary confinement *is* his punishment when a door opens and Blue Zircon (Amy Sedaris) walks in. It turns out that she’s his lawyer, and he is about to go on trial for shattering Pink Diamond. 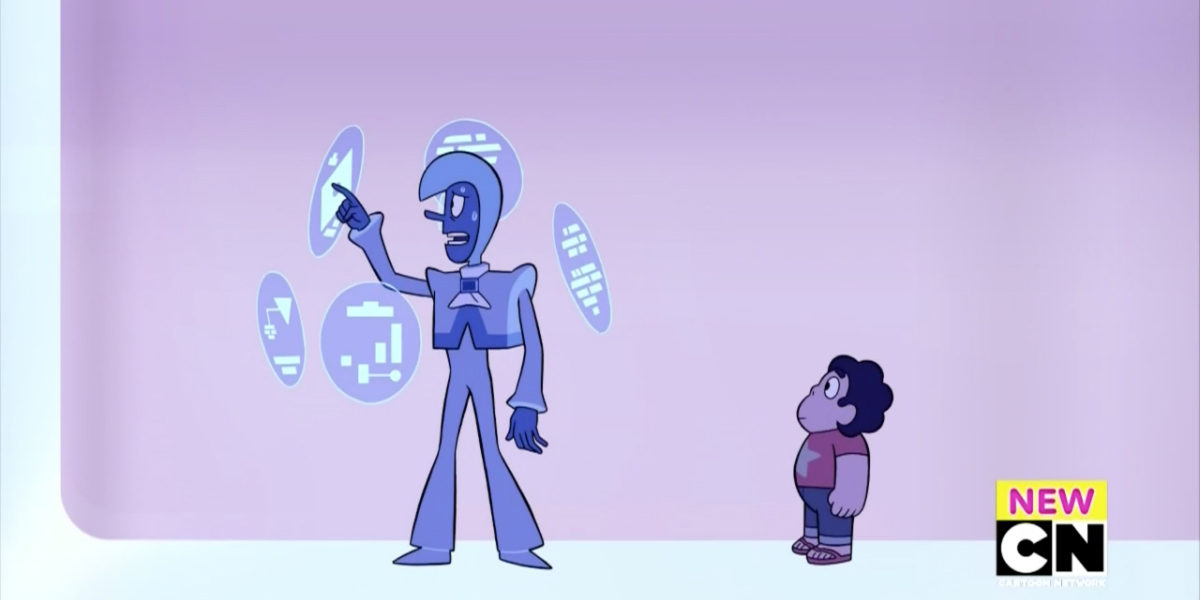 Steven barely has a chance to register what’s happening before the trial begins, and it appears that it’s a weak formality. Green Zircon ( also Amy Sedaris) will be prosecuting, and the only apparent jury is Yellow Diamond (Patti LuPone) and Blue Diamond (Lisa Hannigan), both of whom are eager to find “Rose Quartz” guilty and execute Steven. 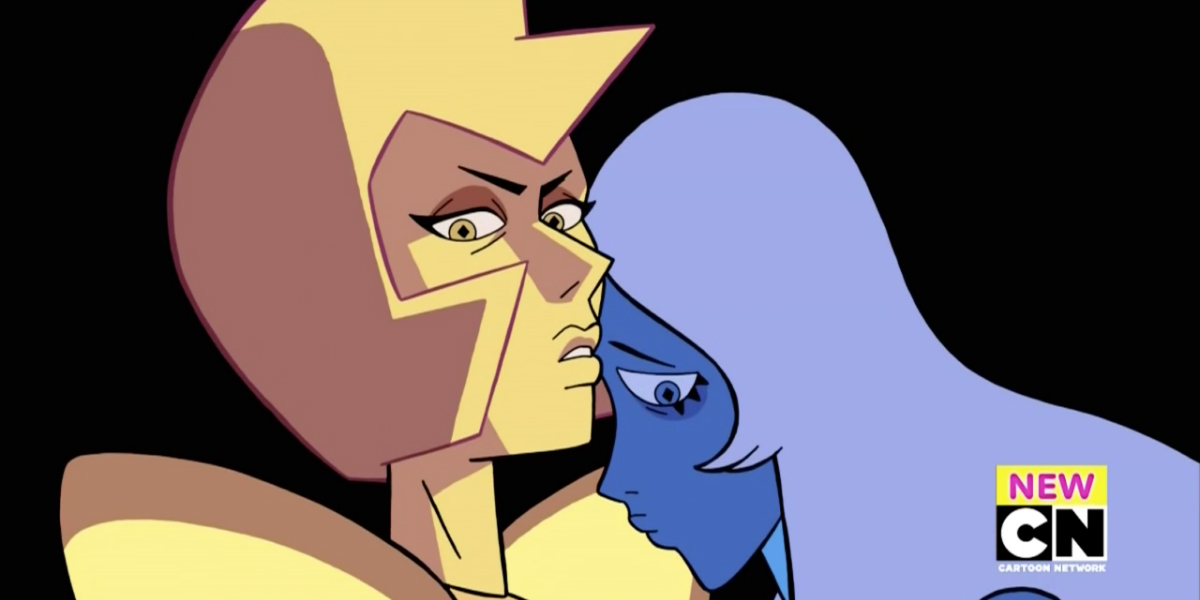 Blue Pearl (Deedee Magno) serves as courtroom sketch artist, Yellow Pearl (also Deedee Magno) as court reporter and Green Zircon makes her case that Rose Quartz did shatter Pink Diamond, and that Steven is Rose Quartz. She has Eyeball (Charlyne Yi), one of the rubies Steven threw into space, testify that Steven bragged to her that he was Rose Quartz and has all her weapons. Between this and Steven spontaneously confessing, it seems like an open-and-shut case. 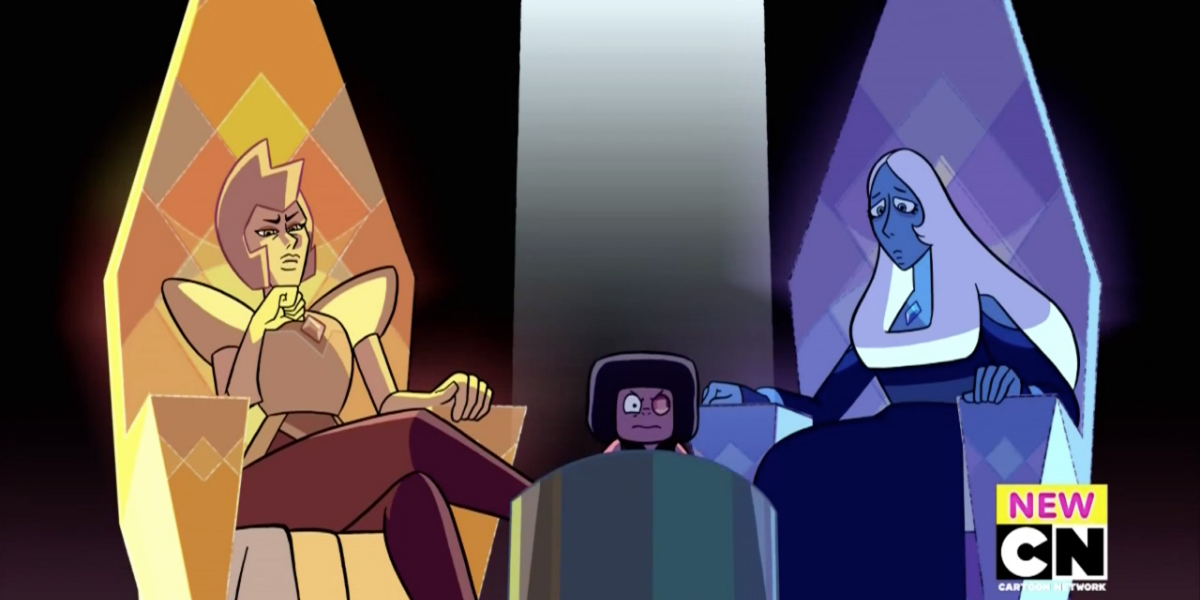 Steven’s confession upsets Blue Diamond so much that the Diamonds call recess, and when Steven and Blue Zircon are back in his cell alone, she takes him to task for all the “maybes” and “probablys” in his confession, which leads to him explaining that he doesn’t actually know what happened. This opens Blue Zircon’s eyes to the fact that what the Diamonds are trying to understand is HOW Rose Quartz could have shattered Pink Diamond, and then she’s ready to mount a defense. 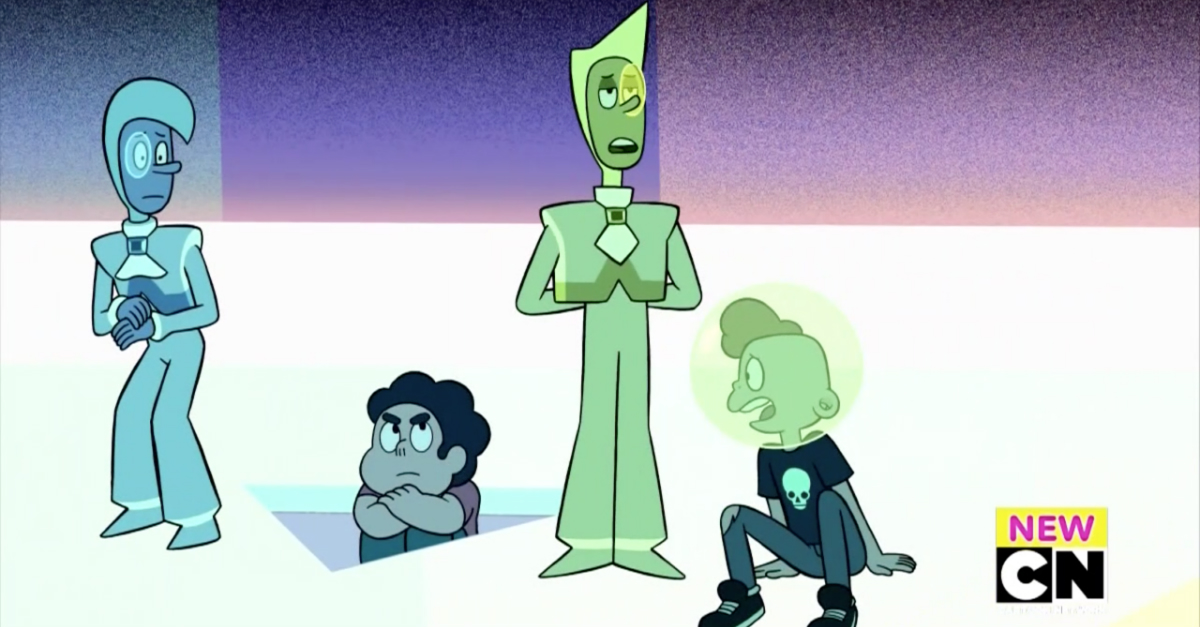 They return to the courtroom, and Blue Zircon borrows Blue Diamond’s palanquin to illustrate that if the facts, as they’ve been accepted about Pink Diamond’s demise, are true, they don’t make sense. The premise that Pink Diamond would walk out of her palanquin without her entourage of protectors and servants, in a manner that would leave her vulnerable to a frontal attack by a known rebel, is preposterous. The possibility of a fellow Diamond (hello, Yellow) being able to lure Pink Diamond out, shatter her and cover it up, though? Very plausible.

Yellow Diamond, not surprisingly, is enraged by this accusation and poofs both of the Zircons. Blue Diamond jumps up to stop her from disrupting the proceedings, and as they’re distracted, Steven grabs poor Lars, who has been on hand as evidence of Rose’s unreasonable passion for human beings, and they escape the courtroom in the palanquin, emerging into the Gem Homeworld. 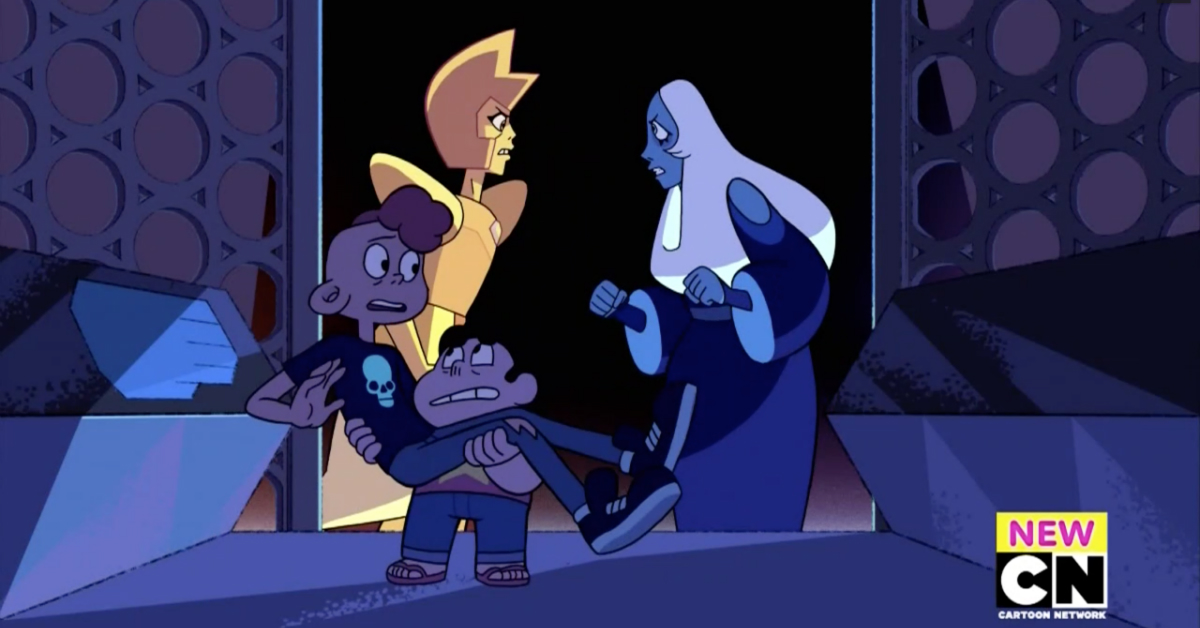