When the last episode of Steven Universe ended, Steven (Zach Callison) was losing consciousness in a forest clearing as Aquamarine (Della Saba) and Topaz absconded with Connie (Grace Rolek) and the rest of Steven’s friends. When “I Am My Mom” opens, Steven has woken up and raced home to tell the Crystal Gems that there’s an emergency afoot.

He’s figured out that the Homeworld Gems are only targeting his friends and that if they don’t act fast, they’ll take them into space– although he still doesn’t know why. When he tells the Crystal Gems that it’s an Aquamarine and a Topaz fusion who are behind the kidnappings, Pearl (Deedee Magno) kind of flips out. She deduces that Blue and Yellow Diamond must have sent them personally, which leads Steven to the conclusion that they’re collecting humans for the zoo.

It’s Amethyst (Michaela Dietz) who wonders aloud why the Diamonds would want only Steven’s friends for the zoo, but before the group can pursue her line of thinking any further, Steven gets a photo text from Connie showing that they’re at Fun Land, and Steven and the Crystal Gems run for it.

Garnet (Estelle), Amethyst and Pearl take off to look for the Homeworld Gems, and Steven tries calling Connie’s phone. It rings, and he and the Crystal Gems all follow the sound, only to discover that it’s a trap! The Topaz fusion and Aquamarine are waiting just out of sight. 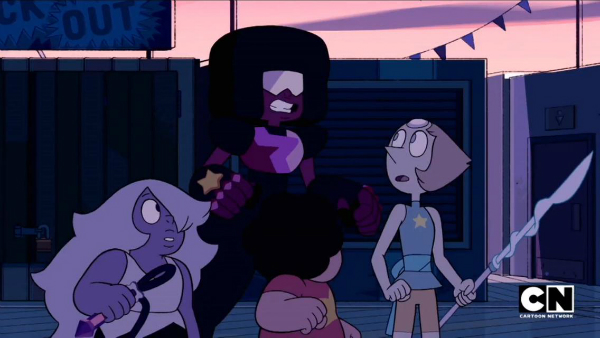 When they emerge into the light, Aquamarine says that the list of humans they’re collecting comes from “a Steven,” and as she expands on the report they’re working from that was provided by Yellow Diamond, Steven realizes that the list of humans they’re abducting is one he gave Peridot before she chose to be an Earthling. He also understands that Aquamarine isn’t looking for her dad– she’s looking for someone named “My Dad,” a.k.a. Greg. 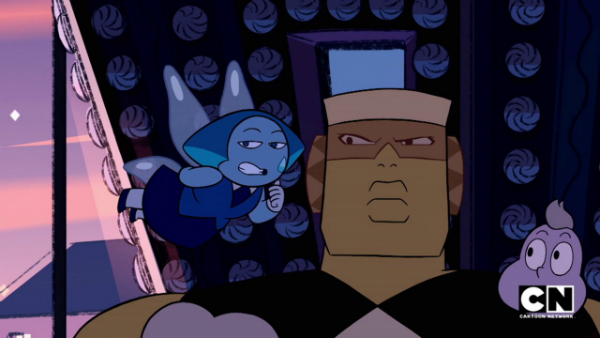 The Crystal Gems are ready to fight, but as Garnet goes in for her first blow on the Topaz fusion, Jamie (Eugene Cordero) expresses fear and distracts her long enough for Topaz to throw her across the boardwalk. Pearl and Amethyst aren’t any better off, as Aquamarine has a very effective wand that can capture anyone in a blue bubble of energy and lift/fling them away.

When she grows tired of the fight, Aquamarine implies that it isn’t part of her orders to deliver the humans on the list alive. To stop her from killing his friends, Steven steps forward and proclaims that he is “My Dad,” and even though Aquamarine doesn’t 100% believe him, she feels like it’s good enough to get them out of there. She summons their ship, and the Topaz fusion adds Steven to its cluster.

Once on board, Steven struggles to conjure his bubble to break apart the Topaz fusion and free all of the trapped humans. When he finally succeeds, Steven and Connie take on the Topazes in a fight while Sadie (Kate Micucci) tries to get Lars (Matthew Moy) moving towards safety. Lars, true to form, leaves Sadie in peril and runs to hide.

With Lars hiding in a stairwell and Sadie, Jamie and Onion staying out of the way by the ship’s door, Steven and Connie fight the Topaz, who has reformed into a fusion. Steven takes a break to have a pity party, apologizing to Connie for getting everyone into this jam by having given the Gems the list. He also laments his mom being the reason the Homeworld Gems want to destroy the Earth. Connie, always the voice of reason, orders him to focus, and they make a move on the door, just as Alexandrite, the fusion made up of Pearl, Amethyst and Garnet, plucks the ship out of the air and opens the door. 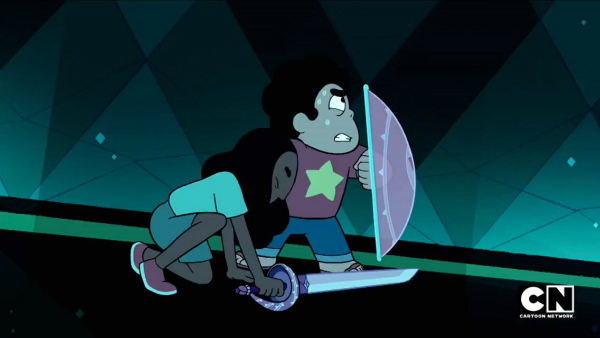 Steven tells Alexandrite to take the ship close enough to the water that they can jump out. It’s working until Aquamarine uses her wand to freeze everyone except Steven. She tells him it’s hopeless to try to stop her because she can’t go back to Homeworld without getting what the Diamonds want. 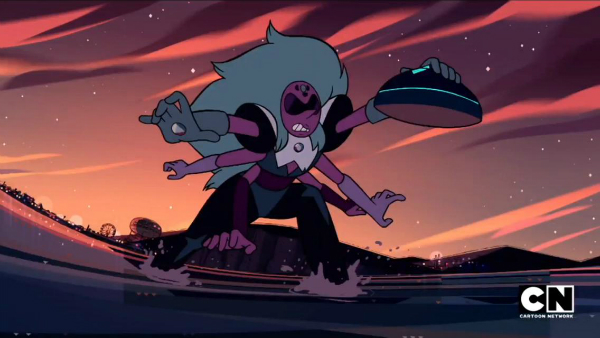 Steven says to her, “I’m not my dad,” which infuriates her, because now she’ll have to stay on Earth longer to get the last human on her list. He turns her frown upside-down, though, when he says that he’s actually his mom– Rose Quartz, the Gem who shattered Pink Diamond. He offers himself in lieu of his friends, insisting that he’s the one the Diamonds really want.

Aquamarine frees everyone from her beam, and the Crystal Gems beg Steven to jump from the ship. Instead, Steven explains that he now understands that he’s the only one who can stop it all, because Rose Quartz started it. He walks into the ship (where Lars is still hiding), and blasts off to Homeworld.

Looks like we’ll get to see what happens next in a one-hour special event on Memorial Day!