When the latest episode of Steven Universe, “Are You My Dad,” opens, Steven (Zach Callison) is waiting impatiently for a package while Amethyst (Michaela Dietz) drinks beans from a can. Steven is confused because mailman Jamie (Eugene Cordero) is usually so punctual. Amethyst suggests that he stop waiting around for the mail and go into town for donuts. 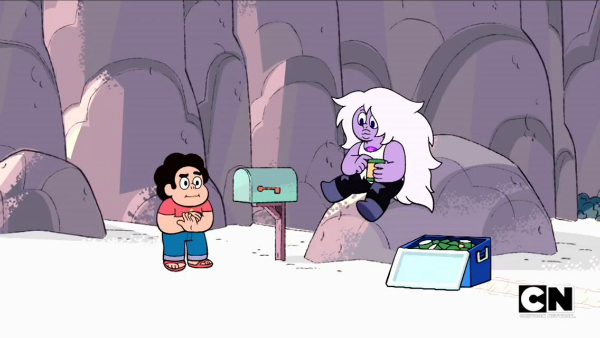 It seems like an ideal day. Garnet (Estelle) and Pearl (Deedee Magno) are building a sand castle for crabs to live in, the sun is shining and Steven is about to have some donuts. Alas, in Beach City, perfect days like this usually mean danger is right around the corner.

Indeed, around the corner Steven finds Sour Cream (Brian Posehn) posting “Missing” posters of Onion. Apparently Onion hasn’t been seen for a couple of days— not since Steven and Connie (Grace Rolek) encountered him at Fun Land. Sour Cream gives Steven a Missing poster and asks if he’ll see if Lars (Matthew Moy) and Sadie (Kate Micucci) will let him hang it in The Big Donut– he’d tried, but nobody was there and the store was closed. 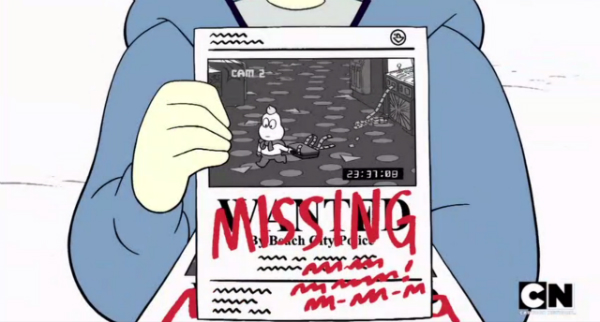 Hearing that The Big Donut is closed when it should be open rings an alarm bell in Steven’s head. He rushes to investigate, trying the door and calling for his friends. He tries the back door and is surprised by Sadie’s mom, Barb (Kate Flannery), emerging from the back room. She’s also looking for Sadie, who hasn’t been seen at home since the potluck… the potluck Lars didn’t show up to.

Steven shares his growing concern about all of the missing people with Barb, and when he gets to the fact that Jamie never delivered his package, Barb confirms that she saw Jamie with it earlier. Steven and Barb start searching the town to see if anyone else is missing, and as he searches, Steven tries to figure out what the missing people they know about have in common.

While eating some Chaaps outside of the Fun Land arcade and trying to puzzle out where everyone is, Steven is surprised by a small, blue Gem who has a gem shaped like a teardrop under one eye. She looks like a schoolgirl, and she asks him, “Are you my dad?” She says she needs to find “my dad” right away. Steven says no, and she looks disappointed, sprouts liquid wings like Lapis’s and flies away. Steven chases her, begging her not to leave him with another enigma, but she’s gone.

Back home, he describes the Gem he encountered to Pearl, Garnet, Amethyst and Connie, who attempt to draw what he’s seen as though they were police sketch artists. Connie’s drawing is closest, Amethyst has drawn a horse in front of a mountain because she was “going for a feeling,” Pearl has drawn a gorgeous crying angel (and presents it with the self-deprecating comment that she “can’t even draw a circle”) and Garnet has drawn a picture of herself (because she likes herself). 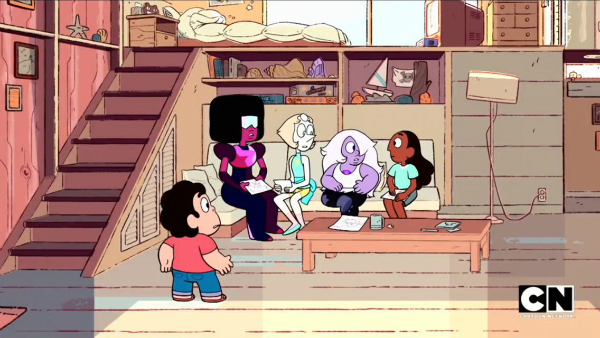 The Crystal Gems want to find the mysterious Gem and fight her, sure she must be a Homeworld Gem who has come for them. When Steven tells them that she said she was looking for her dad, they’re flummoxed because Gems don’t have dads. Connie reminds them that Steven has a gem and a dad, which raises the question of whether or not Steven really is the only Gem/human hybrid. Leaving that mystery for another time and returning focus to the issue at hand, they all agree to split up an investigate.

Steven and Connie head out together, Connie armed with Rose’s sword. As they walk, they talk, pondering ways in which it might be possible for the little Gem to have a dad. They head into the woods at the edge of town, literally turning over every leaf in their search.

While they hunt the clearing Onion introduced Steven to a while back, the little Gem, Aquamarine (Della Saba), lands on a tree branch and asks Connie, “Are you my dad?” Connie says she isn’t, and Steven, who has become stuck in a hollow tree, calls out to her, urging her to be careful. Aquamarine is delighted to have found a Connie and calls out for “Topaz” to come. 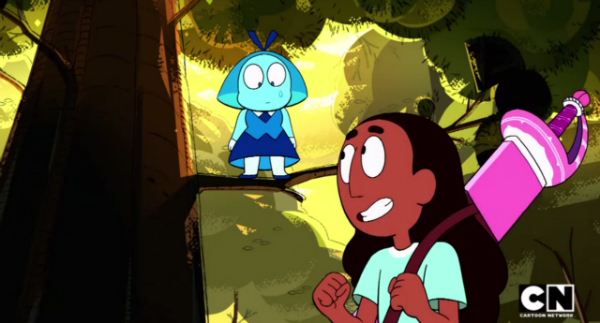 Into the clearing comes a lumbering Topaz fusion, with bits of each of the missing friends sticking out of her. The Topaz fusion separates, holding on to all of Steven’s friends, and runs for Connie. As they come at her, the Topazes join hands, fusing again just as they intersect with Connie and adding her to the cluster of people emerging from her. 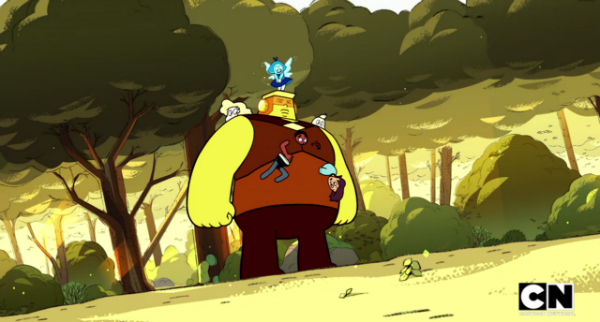 Steven muscles his way out of the hollow tree to save Connie, but the Aquamarine is dismissive of him because “he’s not my dad” and effortlessly tosses him against a tree. He can see Aquamarine and Topaz disappearing with his friends as he loses consciousness.