In today’s episode of Steven Universe, “The Good Lars,” Steven (Zach Callison) is hanging with Lars (Matthew Moy) and Sadie (Kate Micucci) at The Big Donut, sampling Lars’s latest creation: pumpkin bread shaped into a little pumpkin, when Buck Dewey (Lamar Abrams) comes in and invites them all to a potluck. Lars, as usual, loses his shiz when one of the “cool kids” talks to him, and he starts making weird faces and noises. 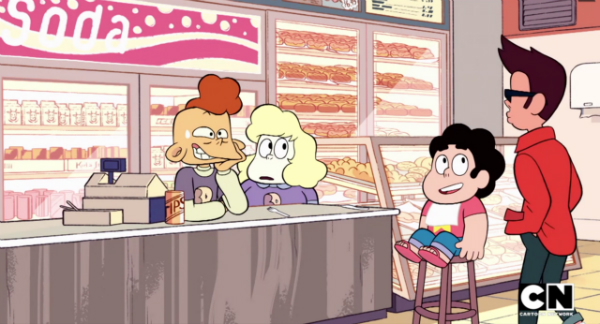 Once Buck leaves, an embarrassed and deflated Lars needs some convincing from Sadie and Steven to agree to attend the potluck. They get him to come around, and he decides that if he’s going, he’ll have to do something PERFECT. They head to Lars’s room, where he produces a special cookbook and decides he’ll make an ube cake. 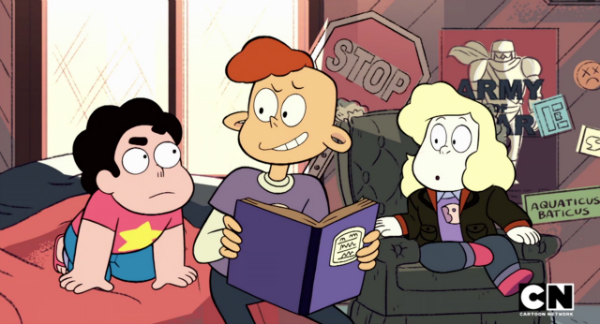 Taste-testers Steven and Sadie declare the cake amazing and gobble it right up, leaving Lars with the task of making a new one for the potluck. Sadie heads home, and Steven keeps Lars company while he bakes. 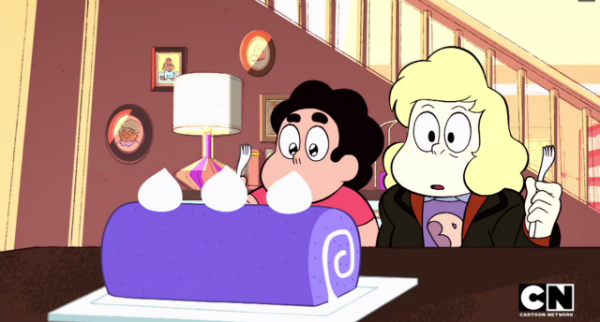 Lars is incredibly nervous about attending the potluck and showing up with his “weird purple cake” and Sadie– revealing that he loves baking and…. Steven assures him that he doesn’t need to worry about it, because if the kids at the party are really his friends, they’ll like him no matter what. Lars is impressed by Steven’s wisdom, and Steven leaves him alone and heads home to get ready.

Later, Sadie and Steven are both fairly punctual in arriving at the party, but Lars isn’t there. Buck, Sour Cream (Brian Posehn) and Jenny (Reagan Gomez-Preston) are chilling with pizzas and soda, and Sour Cream is crazy excited that Sadie’s brought paper plates.

Steven volunteers to go hunt up Lars and travels about Beach City looking in every place he can think of– even jumping high into the air to look from above. Finally he realizes he can call Lars from his cell phone, but he gets voicemail. When he gives up and heads back to the potluck, he stops to glance in the trashcan outside of Sour Cream’s house and sees Lars’s ube cake discarded there. He jumps to the conclusion that Lars came, but decided not to go inside.

When Steven rejoins the group, he finds them jamming a free-form song about the pizza potluck. Sadie has relaxed with the cool kids, and she and Steven stay for the party and have a great time. 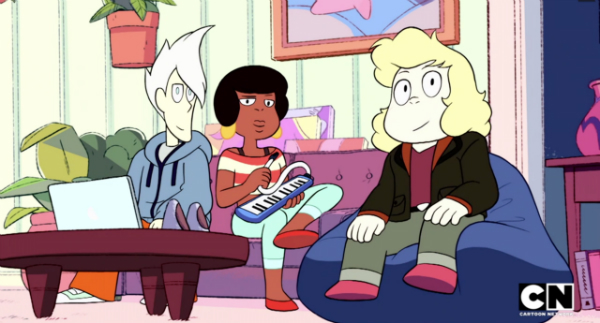 On their way out, though, Steven shows her the ube in the garbage and they commiserate about Lars not having shown up. Sadie takes a short trip down the path of wondering if she should have tried harder, but when she hears herself sounding like her mom as she wishes Lars would just be happy, she decides her energy would be better spent on her own life. 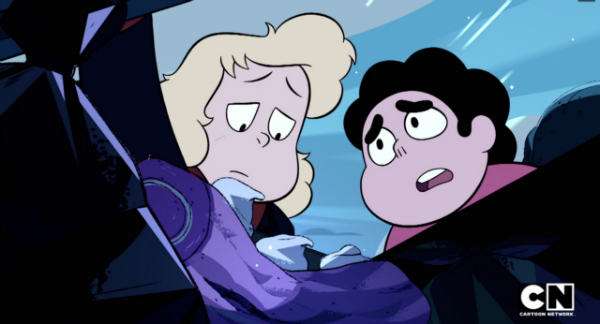 The two walk together for a while, then part ways under a streetlight. When they do, the same ominous shadows that confronted Onion at the end of the previous episode appear. 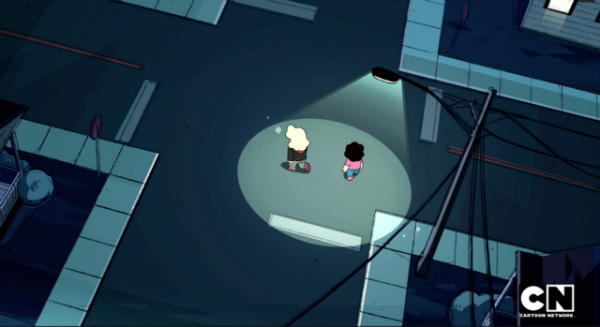