In “Doug Out,” Steven Universe (Zach Callison) and Connie (Grace Rolek) are reminiscing about recent adventures while enjoying some fry bits when the po-po rolls up on them and yells for them to drop the bits. Steven surrenders, confessing to breaking the rules by eating the bits instead of proper fries, before Connie can tell him that the police officer behind the megaphone is just her dad, Mr. Maheswaran (Crispin Freeman).

Mr. Maheswaran will be staking out Fun Land because Mr. Smiley says someone has been sneaking around after hours, and he invites Steven and Connie to join him. He says it’s probably just a kid loitering… Famous last words? 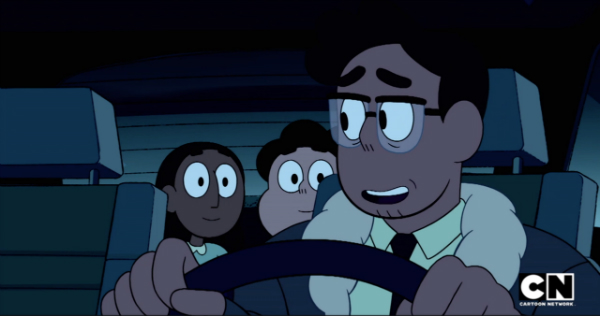 That evening, expecting only to ruin some teen’s night, the trio settles in for a quiet stakeout in Mr. Maheswaran’s security vehicle. Steven comments on how nice it is to be waiting for trouble instead of in the thick of it and corrects Mr. Maheswaran’s misconception that it isn’t all fighting by explaining that he kind of inherited an intergalactic war.

Just then, Connie finds a box of random clothing in the back seat, and her dad gives them permission to use whatever’s in there to go “undercover.” Connie selects a red trench coat and hat, and Steven dons a fake mustache and newsboy cap. Once disguised, they become “Veronica Cucamonga” and “Peter Pizzapopolis.” 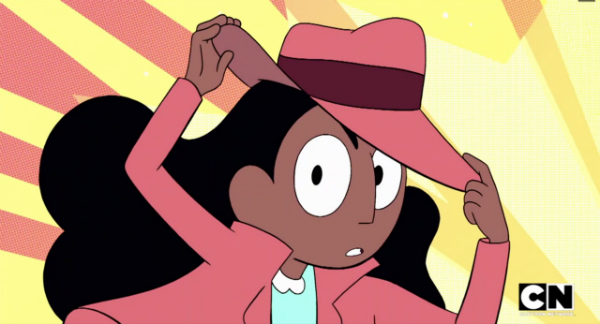 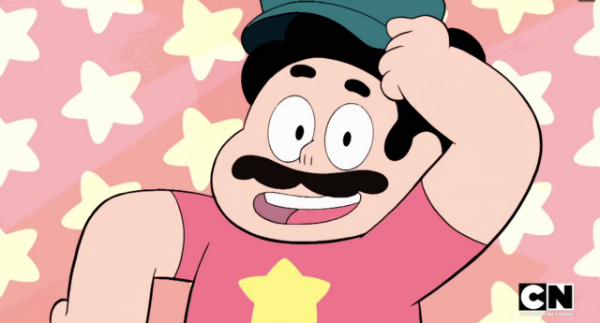 Mr. Maheswaran has just pulled out his official flashlight when they finally hear a noise outside. They hop out to investigate and discover that something has broken through the chainlink fence around Fun Land– and the break isn’t clean. 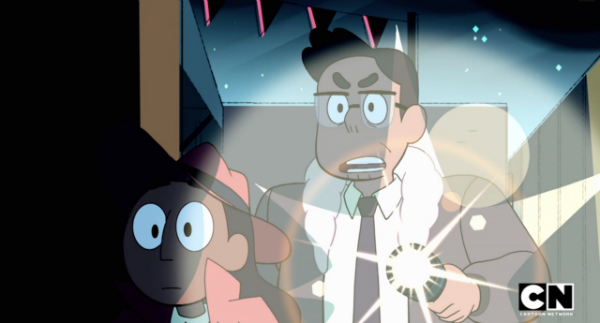 Still thinking they’re tailing a teenager, the three sleuths chase shadows around the amusement park with the assistance of the official flashlight. They hear a noise from the Hyper Space ride, a “rotor” ride that uses centrifugal force to pin riders to the spinning walls. They venture inside to see who’s in there, and the door slams behind them as the ride starts to spin.

Steven is the first to successfully peel himself away from the wall, and he’s able to shut down the ride and let them all out. Outside, the pursuit of the mysterious intruder continues, and Connie and Steven wonder whether they’re dealing with a Homeworld Gem. Someone pushes a loose fence onto Mr. Maheswaran and throws obstacles into Connie and Steven’s path as they give chase.

Finally they corner their quarry in an alley, and it’s Onion! 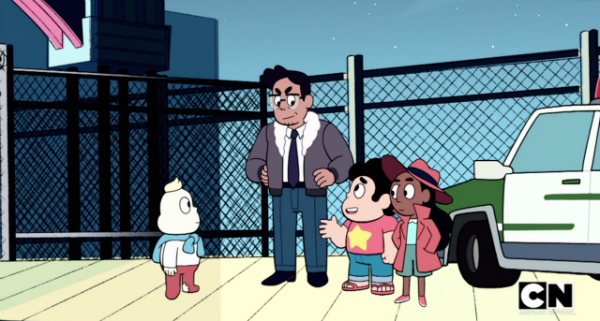 Mr. Maheswaran surprises Connie and Steven by seeming disappointed that it’s just a kid after all. When they ask what’s wrong, he reveals that he was hoping to have them see him take on a “serious” job, since what he does isn’t as urgent as what they do in their intergalactic battles or what Dr. Maheswaran does when she saves lives at work. Connie reassures him that she loves him just as he is, and he cheers right up.

Now that the mystery appears to be solved, Connie and Steven convince Mr. Maheswaran to let Onion off with a warning, and they drive away from him outside Fun Land… but in the last shot we see that Onion isn’t alone!