In the aftermath of his recent adventures, young Steven Universe (Zach Callison) has become convinced that he has a specific destiny that his mother planned before having him, and he’s looking for clues about what it is. In “Lion 4: Alternate Ending,” Steven Universe introduces a new mystery into the story of our hero’s journey of self-discovery: another message from Rose Quartz.

The episode opens with Steven laboriously searching for hints in the video his mom, Rose Quartz (Susan Egan), made for him before he was born. He’s transcribing the first words from every sentence she says, attempting to find meaning in an acrostic of their first letters and/or an anagram of that acrostic. Lion is relatively bored on the bed behind him, apparently having been company to the fruitless search for meaning for some time. Discouraged by his lack of clarity, Steven is distracted by what sounds like Lion hacking up a hairball on Steven’s bed, but in actuality is Lion hacking up a mysterious pink key… and then a half-digested lizard. 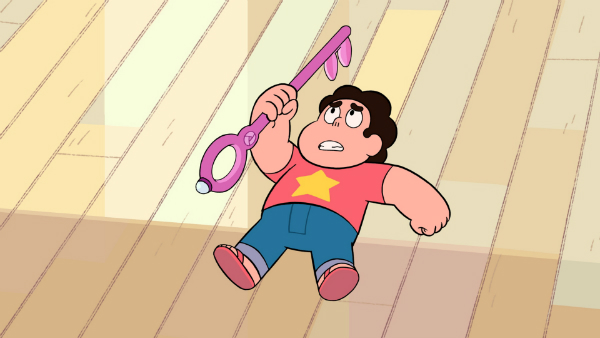 Steven dives into Lion’s mane, to the airless world hidden there, and attempts to open the chest he remembers seeing inside with his new key, but it’s too big for the lock. Then he has Lion take him to each of Rose’s other hiding spots that he knows of– the armory, the fountain and the “room of requirement” in the temple. None of these has a real lock to fit the key, so Steven asks Lion to take him somewhere new.

Begrudgingly, Lion takes Steven to the desert in which the Gems first found him, then runs through the sun-baked landscape for hours with a parched Steven clinging to his back. At last, they approach what appears to be a temple shaped like a giant gem woman’s spread legs. (Maybe there’s a “return to the womb” metaphor here for Steven?)

Steven unlocks the door and enters, only to find that there’s no ceiling or walls to the “room” beyond, and it’s essentially a dump. He briefly explores the broken and forgotten items piled in the forgotten space, then kicks a discarded helmet in frustration. When he does, a VHS tape like the one he’s been watching at home is revealed, only this one says “For Nora” on it. 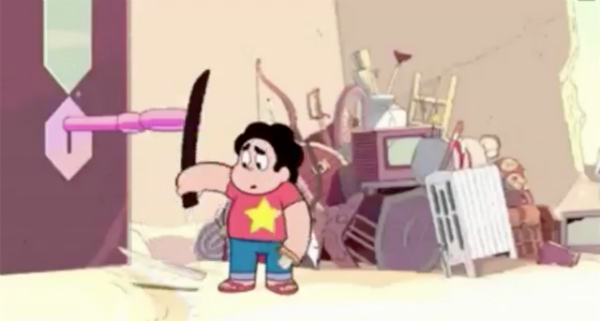 At first, Steven wonders if he is not only his mother (a point Rose meaningfully emphasizes in the video clip at the beginning of the episode– that Steven will be 1/2 her), but also an unknown sister named Nora. He turns to Lion for answers, and Lion takes him back to Beach City and deposits him on a hilltop where Greg (Tom Scharpling) is jamming on the guitar.

When Steven shows him the VHS tape, Greg nostalgically exclaims that he’d never expected to see it again. He pops it in his TV/VCR combo, and his own younger self appears… followed by Rose giving Steven’s special message to “Nora.” 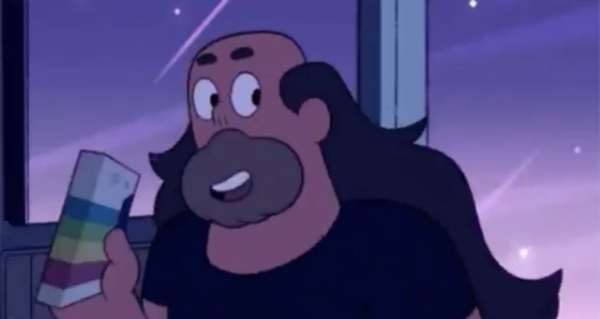 Steven is upset and perplexed. He assumes there’s something cosmic at play, but Greg assures him that it’s simply that they’d boiled it down to Nora for a girl and Steven for a boy, and Rose had made versions of the video for both. He explains that Rose loved that not even Garnet had been able to predict who her baby would be or what its life would be like.

This news doesn’t immediately comfort Steven, who feels like he’s nowhere nearer understanding his purpose. When he expresses this to Greg, Greg assures him that his only purpose is to be himself– that’s all Rose wanted for him, no matter who he turned out to be. Realizing that this means he’s already fulfilling his purpose, a teary Steven finds some relief. 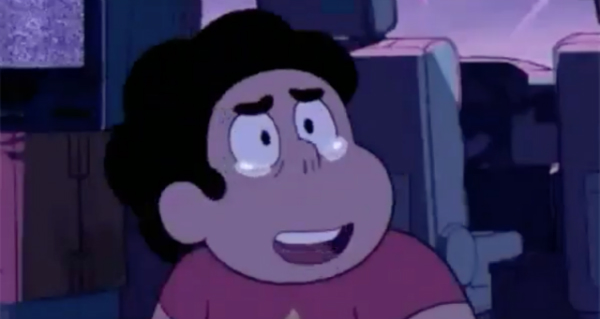