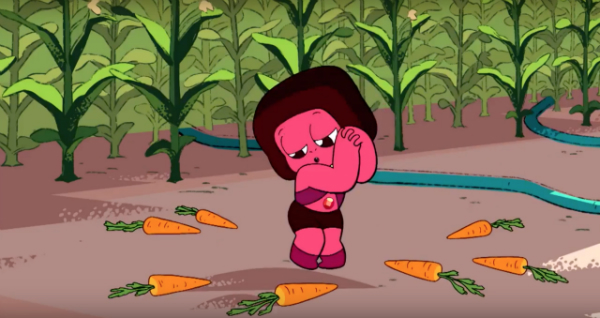 I love it when Charlyne Yi shows up as a ruby on Steven Universe. She’s kind of delightfully odd in most of her roles, and she definitely brought that to “Navy,” the ruby who literally dropped in today.

Room for Ruby opens with Steven and Garnet wishing on stars. It’s innocuous at first, but then one shooting star comes right towards them, crashing onto the beach below and screaming as it comes. When they rush down to investigate, they discover that it’s one of the rubies they left floating around in space– the sweet-seeming ruby Steven had named Navy, because her gem is in her navel.

Navy insists that she wants to stay with them and live on Earth. Garnet is skeptical, but Steven is eager to give her the benefit of the doubt and takes her to Lapis and Peridot’s barn to see if she can stay with them. 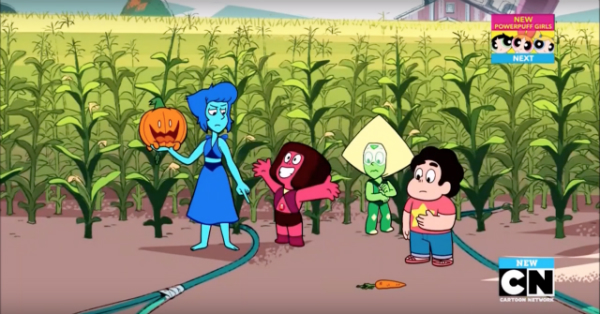 Peridot agrees immediately, and Pumpkin seems taken with Navy, but Lapis is wary. Navy seems to love everything immediately and without reservation. She claims to bear them no ill will for shooting her and the other rubies into space. She’s crazy about plants and dirt and rain and how everything on Earth changes. Navy’s enthusiasm awakens a major insecurity in Lapis, who begins to feel like her own reluctance to love Earth was wrong somehow. Swayed by Steven and Peridot, though, Lapis decides to let Navy try staying with them.

This makes Navy very happy. She tells them tearfully that the only place she’s ever felt at home was on her ship. Steven is moved by this and points out that they have her ship parked nearby. He even asks if she wants to hop in and show them the ropes.

They take off, and at first Navy is being an engaging guide. Then she asks Steven to push a suspicious yellow button, and suddenly she’s encased in a protective shield as the door flies open and Steven, Lapis, Peridot and Pumpkin are flung out the door, barely holding on. Navy reveals that she could have just stolen the ship back, but she wanted to see their faces when they knew she’d tricked them. A furious Lapis starts climbing back in the ship to give her what for when she shakes them off over the ocean and disappears back to space.

Steven, Lapis, Peridot and Pumpkin splash down, and to Steven’s surprise Lapis starts laughing. “I was right!” she exclaims! She is validated by knowing that nobody can be as well-adjusted as Navy pretended to be. 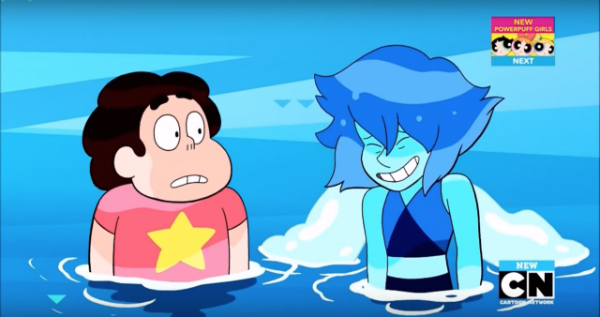 The soggy trio (and Pumpkin) make it back to shore, where Garnet greets them with a balloon. 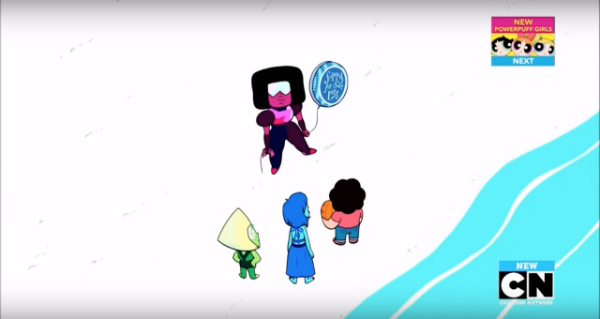 What’s great about this episode is that it feels like a definite step back towards the big arc. Since the Gems have lost their ship, it’s unlikely that the next major step forward will be them returning to the Human Zoo. Now that the rubies have likely returned to Homeworld, though, maybe the Homeworld Gems will make their way back to Beach City.