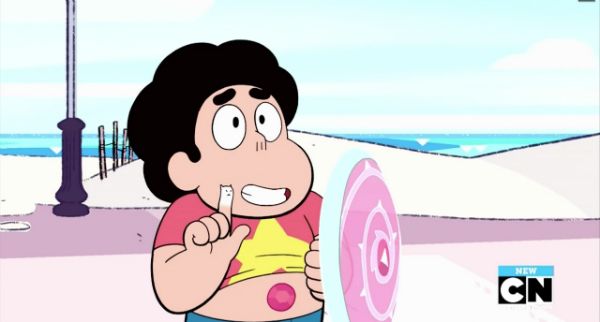 In today’s episode of Steven Universe, “Rocknaldo,” the Crystal Gems unexpectedly gain a new recruit, and Beach City gets a lesson in acceptance and inter-species friendship.

Steven is enjoying a beautiful day on Earth by walking through the (literal) atmosphere on Beach City’s boardwalk when he encounters Ronaldo (Zach Steel) distributing pamphlets about “Rock People.” Steven, always eager to be educated, takes one and settles down on a bench to read it. He discovers that it is essentially anti-Gem propaganda and confronts Ronaldo about his message.

Ronaldo points out the characteristics of Rock People in an effort to make Steven see that they’re different than the Crystal Gems. They have gems embedded in their bodies, they can pull weapons from these gems and they can change their physical appearance. Steven shows Ronaldo his gem, pulls his shield from it and produces one kitty finger. Steven’s point is that the Crystal Gems *are* the Rock People Ronaldo has vilified, and Ronaldo gets the message loud and clear– a little too loud and clear, as it turns out. 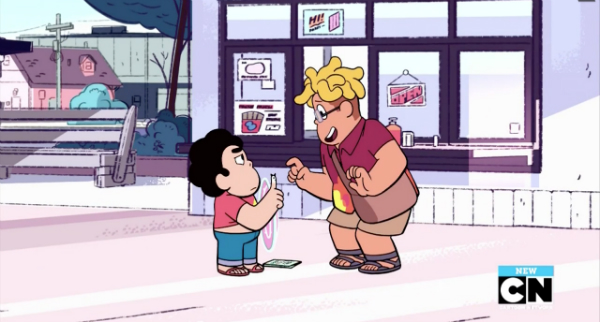 Shortly after their exchange, Ronaldo announces that he’s shutting down his “Keep Beach City Weird” blog so he can think about some things. Moments later he releases a video apologizing for his mischaracterization of the Crystal Gems and announcement that he’s decided to join them. Before Steven and the Gems can finish watching the video, Ronaldo has arrived in their home, ready to move in and join the team.

Although the Gems say no immediately, Steven takes a stand for Ronaldo’s membership application. He points out that it’s great to have someone interested in their cause, makes a moving speech about love and acceptance, and when Garnet slow-claps at the end, Ronaldo is approved and allowed to stay.

Rechristening himself Bloodstone, Ronaldo spends the next week whacking milk cartons with a novelty katana and refusing to sleep (because Gems don’t have to). He becomes sullen when excluded from missions, is jealous of Connie’s role on the team and cool heirloom sword and generally makes Steven miserable without contributing anything meaningful. 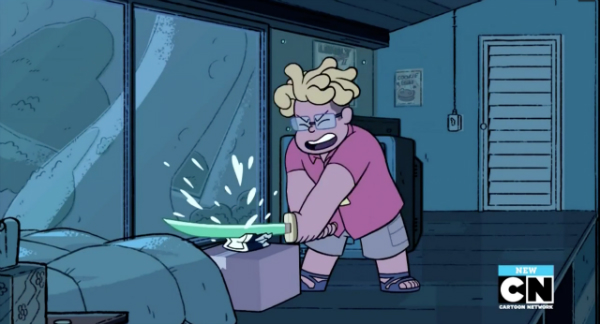 Eventually, Steven reaches his breaking point. Ronaldo has insinuated that Steven isn’t being loving or accepting, and Steven believes it for a few minutes before recognizing that he’s being bullied by an unwelcome guest. He dresses Ronaldo down with some good boundary-setting language, telling him that he doesn’t love the way he’s been acting, he doesn’t accept his behavior and that Ronaldo has been mean to him all week. Rather than react, Ronaldo passes out due to exhaustion.

Steven and the Gems deposit Ronaldo in front of the fry shack and alert his family to his presence there. 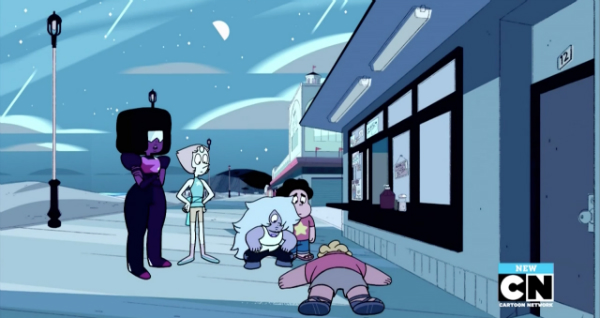 Three weeks later, Steven encounters a contrite Ronaldo on the boardwalk and sits down to talk with him and make sure he’s OK. Ronaldo has seen the error of his ways and made new pamphlets that talk about how great the Crystal Gems are and offer insight into what makes them different– but in a good way. 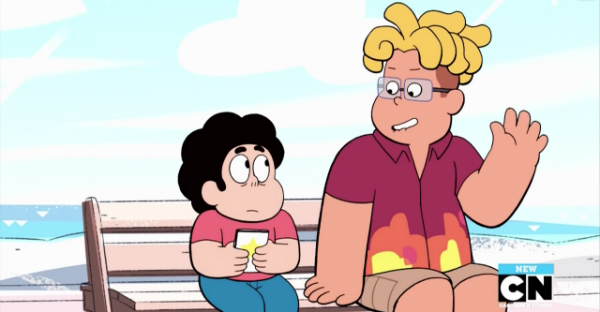 I appreciated the message and its timing, but it was a bummer for the Gems and Connie to be cameos in an episode built around a character I’m just not that interested in. I hope this is foundation-laying for something more important down the road!