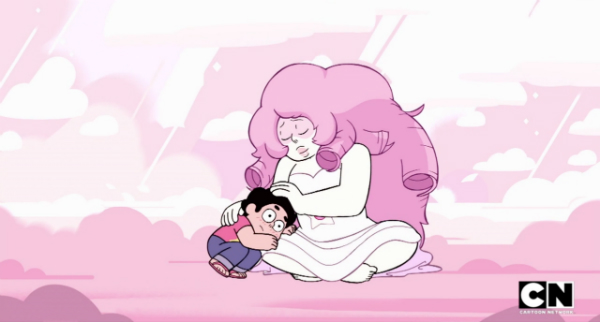 Steven Universe and Connie are right where we left them at the end of The New Crystal Gems when Storm in the Room begins. Connie has filled Steven in on everything that happened while he and the Gems were in space, and now she’s packing her things and ready for her mom to pick her up. The Gems and Greg are off putting up the new sign on the carwash, and Dr. Maheswaran (Mary Elizabeth McGlynn) is supposed to be on her way to get Connie. 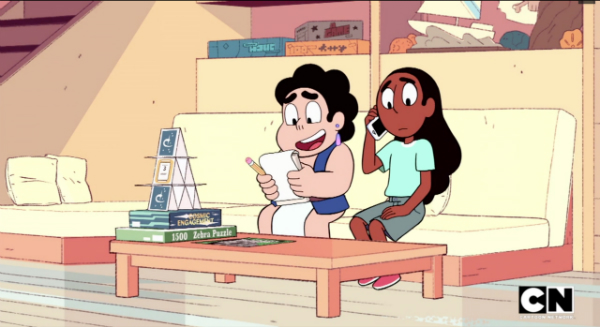 When Dr. Maheswaran is late and Connie can’t reach her by phone, they decide they’d better stay put at Steven’s until they hear from her. They play board games, build houses of cards and have started on knock-off Mad Libs when Connie’s patience erodes to the point that she’s freaking out. Fortunately, her mom appears with a reasonable excuse for being tardy just before Connie gets too worked up, and they leave.

As soon as they go, Steven is left alone with his thoughts, and the echoes of his adventure in space begin to haunt him– especially the questions about Rose Quartz raised by everything that’s happened recently. He tries to escape both his thoughts and her giant portrait, but bad weather forces him to stay inside with her smiling serenely down on him in a moment where he feels far from serene.

Steven begins talking to the portrait, expressing how much he wishes he could talk to his mom and ask her the questions he has, when his gem activates and the door to Rose Quartz’s room (now Steven’s seldom-accessible room) in the temple opens. 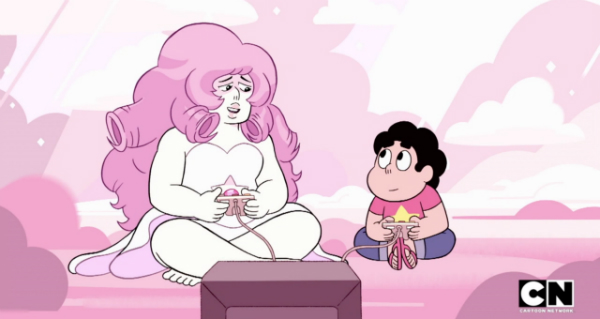 Inside, Steven manifests a version of his mom (Susan Egan). For a little while, they do mother-son activities like playing video games and tossing a football around, but after a while Steven just wants to curl up and feel his mother’s love. It doesn’t take long for him to be harshly reminded that she’s an illusion, though. He tries to take a selfie with her, and the camera shows him alone in an empty room.

Realizing that Rose is gone and that she’s left questions and problems behind for Steven and the other Gems to face without her, Steven becomes enraged. As he vents his anger and frustration to “Rose,” the serene room becomes stormy. It doesn’t take too long for him to tire himself out, and room-Rose reminds him that she is always with him (in the form of his gem) and that she dearly wanted him. 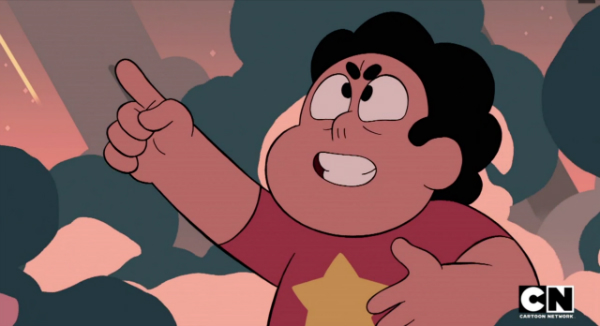 When he leaves the room, Steven curls up on the couch to process his thoughts and feelings. He isn’t alone for a minute before Greg and the Gems burst in with pizza and Greg gathers Steven into a real father-son hug. Surrounded by his family, Steven’s mood lifts, and the pizza is perfect. 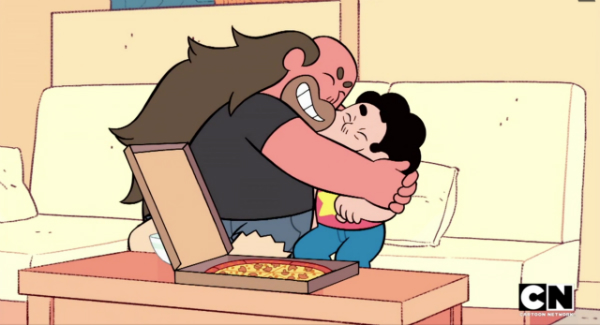