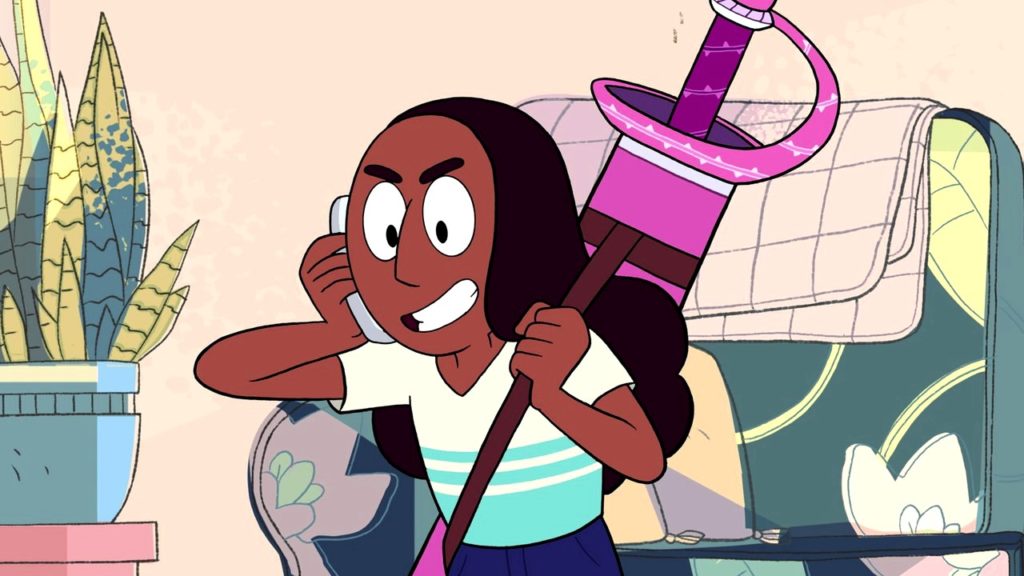 If you’d seen the title of the latest episode of Steven Universe and hoped it was alluding to an influx of newcomers from the Earth-born Gems we met at the Human Zoo, you’d have been disappointed. Instead, we got a quick peek at what Connie, Peridot, Lapis and Pumpkin had been up to while the Crystal Gems and Steven were in space to rescue Greg.

Discovering that Garnet had asked Peridot and Lapis to protect Beach City in their absence and that Steven had asked the same of Steven, this unlikely trio (and Pumpkin), decided to work together, assuming the roles the Crystal Gems and Steven would usually play– literally. Peridot appointed herself “The Garnet,” Lapis was assigned Amethyst, Connie became Steven and Pumpkin was Pearl.

Although all appeared to be quiet during their first wash, loud honking alerted them to the fact that while Steven and Greg were in space, nobody was manning the car wash. Honking for assistance at the empty car wash was Buck Dewey (Lamar Abrams), anxious to get help removing vandalism from his father’s giant head atop Mayor Dewey’s van. Using their powers, Peridot lifted the van into the air, Lapis conjured water to spin-wash it and Connie and Pumpkin buffed it dry, delighting and amazing Buck.

The next day, Beach City was once again doing just fine… except for a long line of honking cars at the car wash full of Beach City residents eager to see the Gems do their magical wash routine. Unfortunately, the New Crystal Gems began to fray when Peridot picked up Yellowtail’s truck with him still inside. Then Lapis decided she should be The Garnet, and in the ensuing power struggle Yellowtail (Tom Scharpling) was flung from his truck as it smashed into the car wash’s sign.

Back at the Gems’s house, Connie made a passionate speech emphasizing that their weakness as a group was rooted in trying to be other people. This moved Lapis and Peridot to join her in playing to their own personality strengths, with peridot fixing the damage they’d caused, Lapis washing away the rubble and Connie organizing everything. By the time the Crystal Gems and the Universes returned from space, the car wash was back to normal and the “Crystal Temps” (as Connie, Lapis, Peridot and Pumpkin had rechristened themselves) had created a fancy new sign for Greg.