STEVEN UNIVERSE Recap: (S04E14) That Will Be All 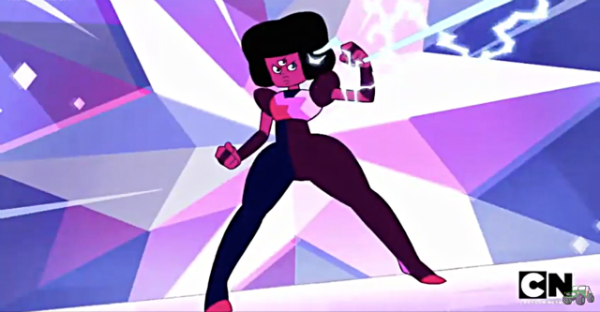 You guys. As painful as it’s been to get this week’s episodes of Steven Universe in such tiny bites, the payoff in today’s episode, That Will Be All, was worth it.

First, can we give the writers a round of applause for having the foresight to develop a storyline about thwarting fascism that would air right now? Dang.

Second, let’s get excited about the return of Patti LuPone as Yellow Diamond! And she sang. Wonderful.

OK: Steven and Greg were being picked up by a menacing Amethyst when we last saw them, and she told them they were in big trouble. Today we resume as the Amethyst guard takes them to a chamber full of Amethysts, one of whom is holding our own dear Amethyst, returned to her normal size. She yells that she’s been found out, and after upholding the ruse for mere moments, she and her new Amethyst friends all have a laugh at Steven and Greg’s expense. 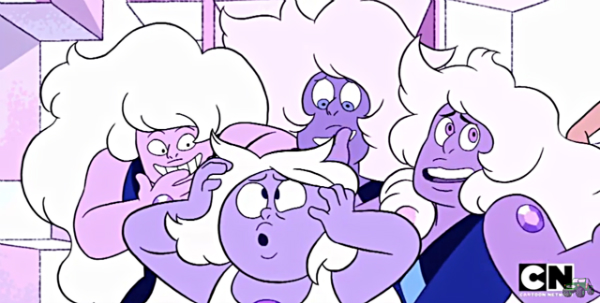 It turns out that all of these Amethyst guards came from the Kindergarten on Earth that Amethyst was made in, and that several of them remember her not having emerged yet by the time they left. They are all wired the same– goofy and rambunctious. She’s been having a blast. She’s even met a Jasper and a Carnelian from the Beta Kindergarten on Earth. Turns out that Earth Gems stick together.

The fun comes to an abrupt halt when Holly Blue Agate comes in with Sapphire, Ruby and Pearl to find out where all the Amethyst guards have disappeared to just before Blue Diamond’s return. Steven, Greg and Amethyst conceal themselves behind the horde of Amethyst guards as they exit the chamber, and Steven and Greg slip into another open room as soon as they have a chance.

This room is pink and full of bubbled Gems– bubbled Rose Quartzes! 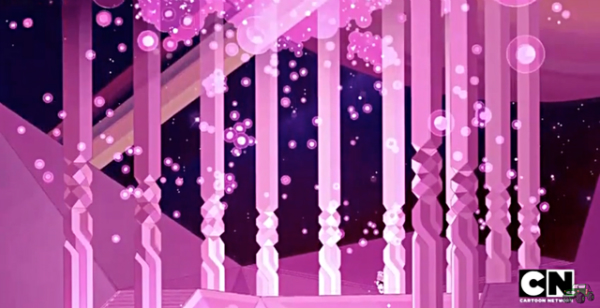 Steven and Greg are just getting the lay of the land when Steven begins crying Blue Diamond’s tears again. Knowing that means she’s close, they duck behind a pillar just in time to avoid being spotted.

Close on Blue Diamond’s heels is Yellow Diamond, who gives her a lecture in song (with backup from their Pearls) about how it’s time to let go of her grief for Pink Diamond and shatter all of the Rose Quartzes in retribution for one of their type shattering Pink Diamond. 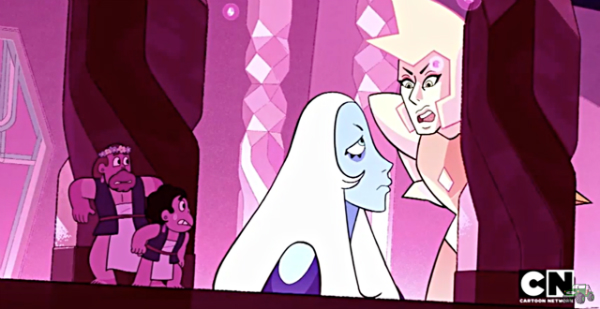 During their exchange, we confirm that the geo weapon the Diamonds are expecting to destroy the Earth is the Cluster, and that the Diamonds don’t know that it’s already been neutralized.

Steven and Greg have been moving discreetly towards the door during all of this, but before they get there, Holly Blue Agate comes in with Ruby, Sapphire and Pearl. 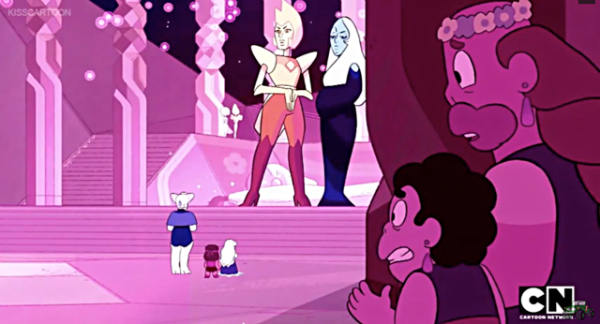 A starstruck Holly can’t believe she’s meeting Yellow Diamond, and she introduces the Sapphire who has just successfully completed Blue Diamond’s mission of delivering another human to the Zoo. Blue Diamond says that she didn’t send and Sapphire on such a mission, and before our Sapphire can literally freeze up with anxiety, Ruby secretly takes her hand and Sapphire gets calm enough to convince everyone that she foresaw that Blue Diamond would want more human specimens and went to get one.

When the royal audience is over, Steven and Greg slip out with their friends. Holly is so enraptured with her encounter with the two Diamonds that she easily overlooks the extras in their group as they return to the Crystal Gems’ ship… until the very last second! 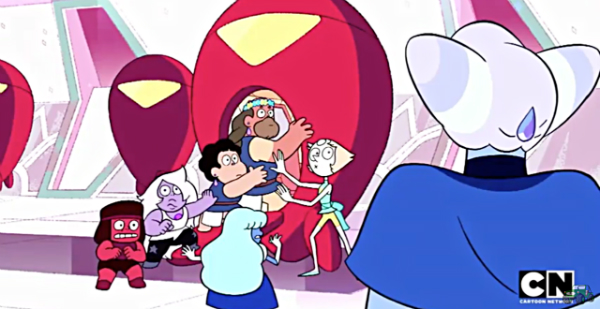 Just as our friends are about to escape scot-free, Holly turns and sees the lot of them boarding the ship. She jumps to the conclusion that her incompetent Amethyst guards are somehow to blame for the humans being loose, but when she pulls a whip from her gem, Ruby and Sapphire reunite and Garnet, Pearl and Amethyst show Holly what’s what. 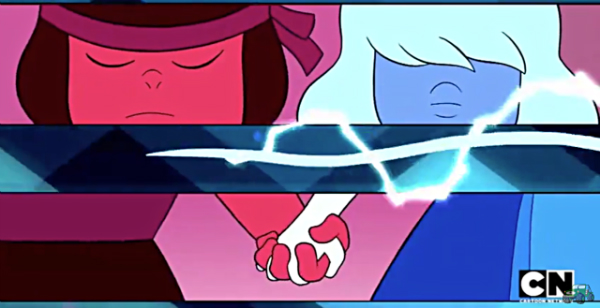 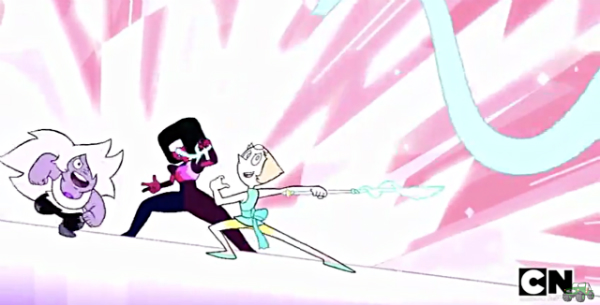 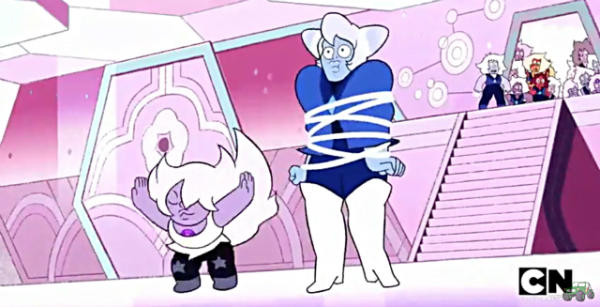 The Earthling Gem guards all wave goodbye to their new friends while Holly threatens to tell the Diamonds what’s happened. Pearl points out that alerting the Diamonds to the fact that this rebel action happened on her watch wouldn’t be the best idea, and Steven, Greg and the Crystal Gems blast off towards home. 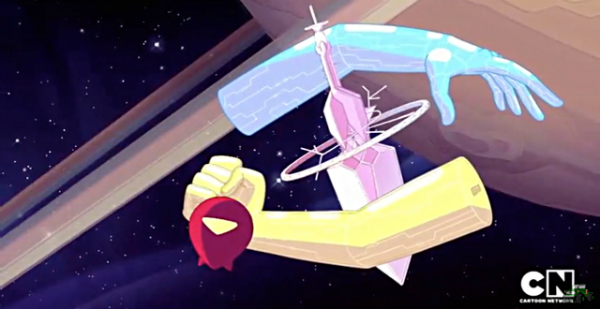 This week’s harrowing adventure has come to a close, but now we know where an army of Rose Quartzes and Earthling Gems are tucked away, and I hope we get back to that soon.