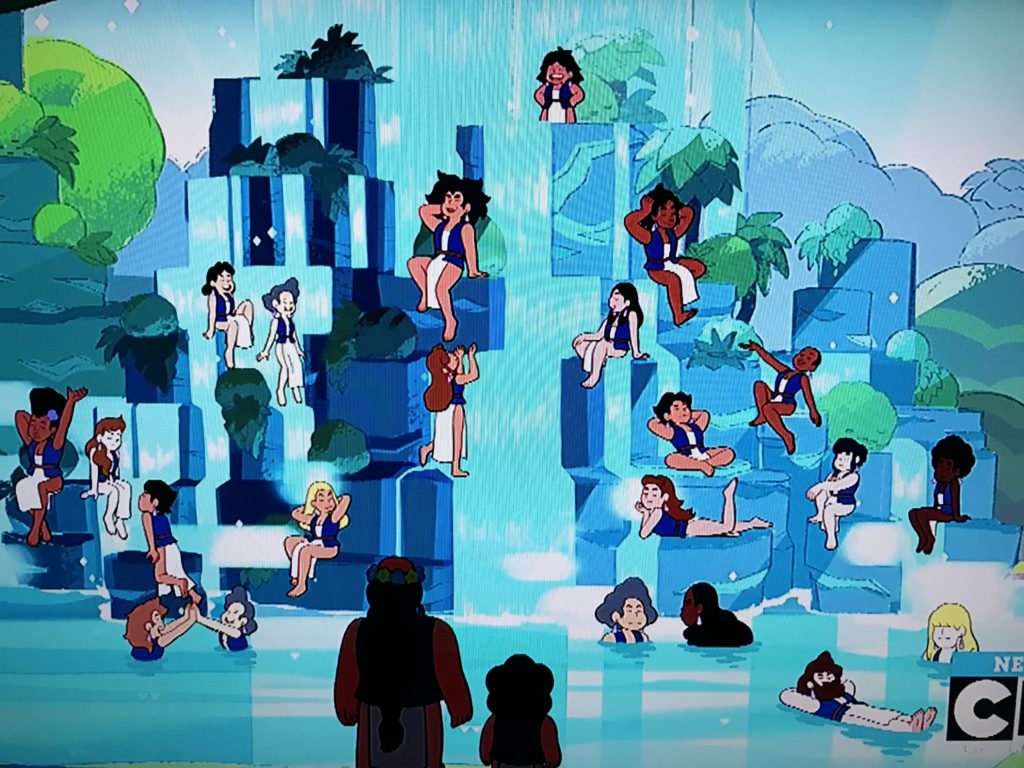 This week’s episodes of Steven Universe are so serial that it’s making me wish I’d waited to watch them all until the storyline was complete. 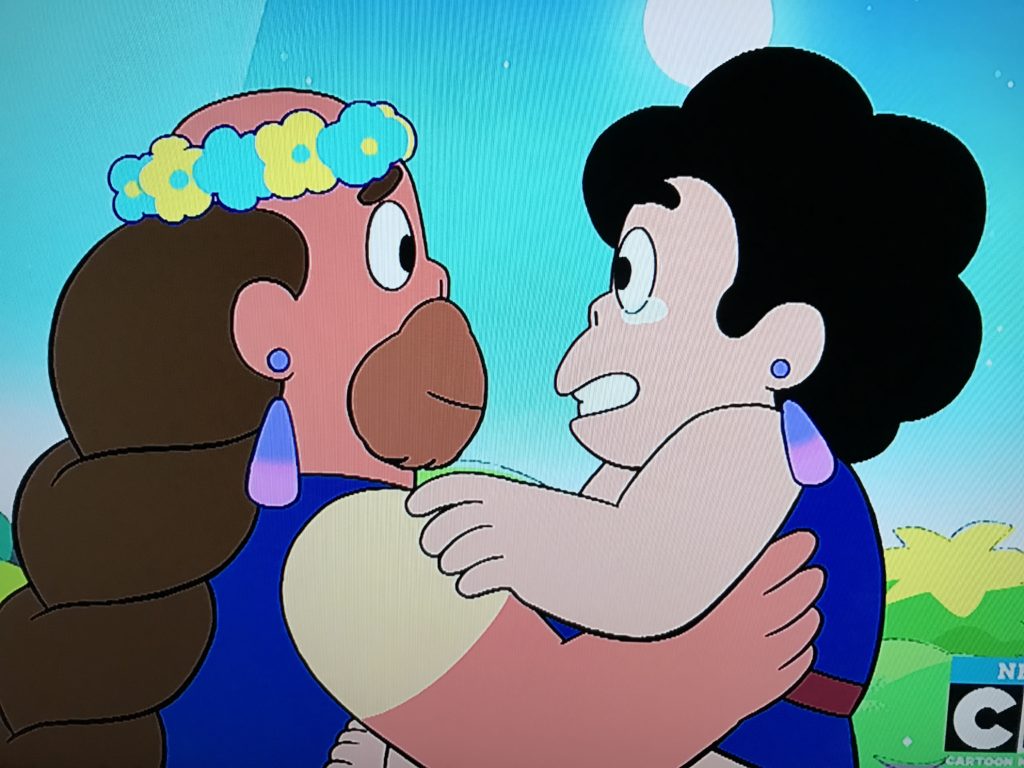 When we left off yesterday, Steven had just emerged from the lagoon in The Zoo and found his dad sitting on a tropical beach having his hair braided by some smiling people. Today we discovered that those people, and a crowd of others, are the descendants of Pink Diamond’s original collection of humans. They’ve never seen Earth, and the Human Zoo is their all-inclusive paradise of a home. 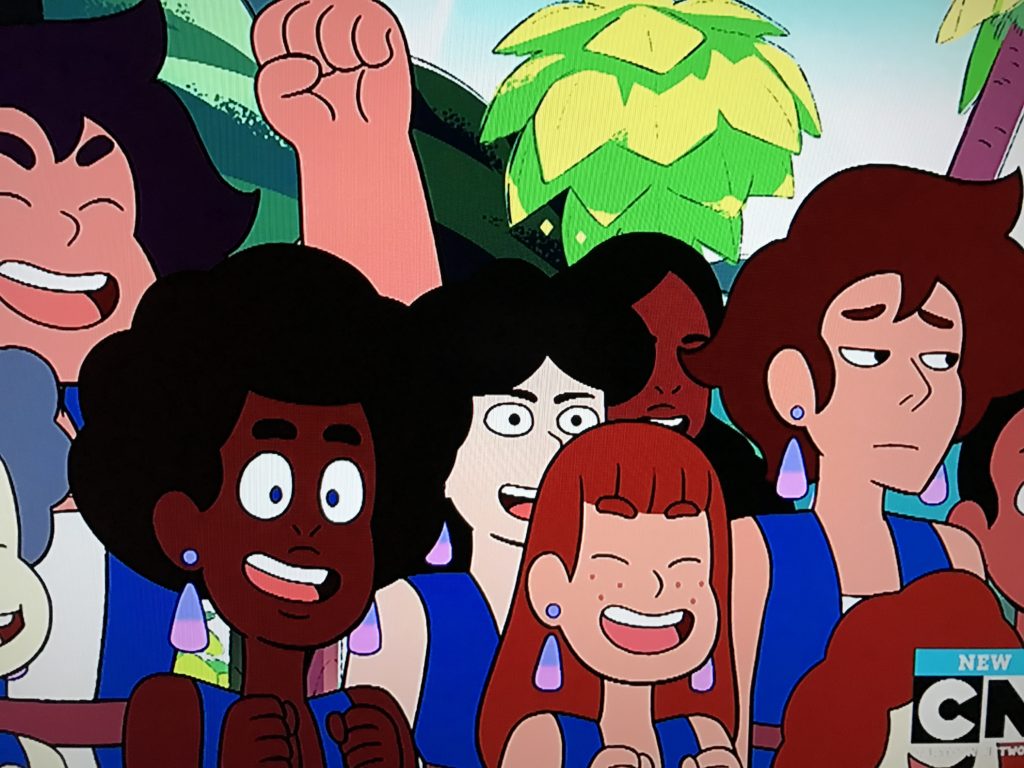 Steven is immediately on the defensive, although Greg (or Gah-regg, as the natives call him) has already eased into the Zoo’s routine– a routine dictated by a little voice that speaks to all of the Zoo’s inhabitants through their earrings.

The humans in the Zoo don’t question the voice. It has been part of their world for generations, and they accept its suggestions that they eat, smell the flowers, rest, play or bathe without question. 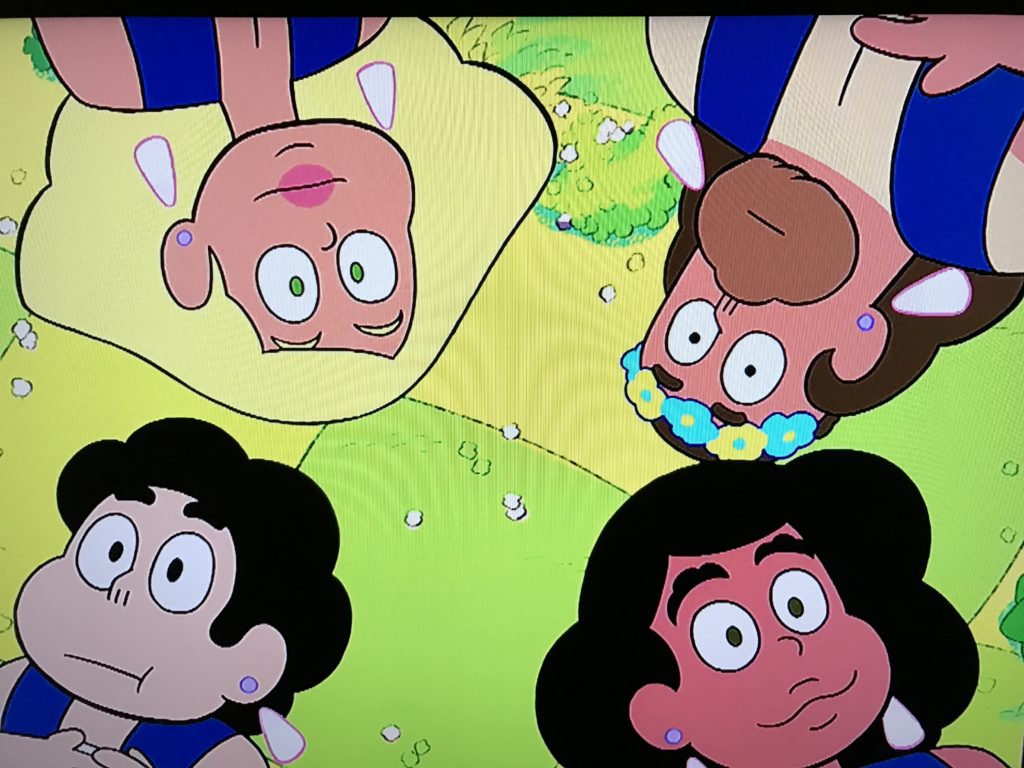 Steven tells Greg that there was a service door into the Zoo that they weren’t able to open from the outside, and says that they need to find it and see if they can open it from the inside. Greg agrees, but recommends that they wait until nighttime to look for it. 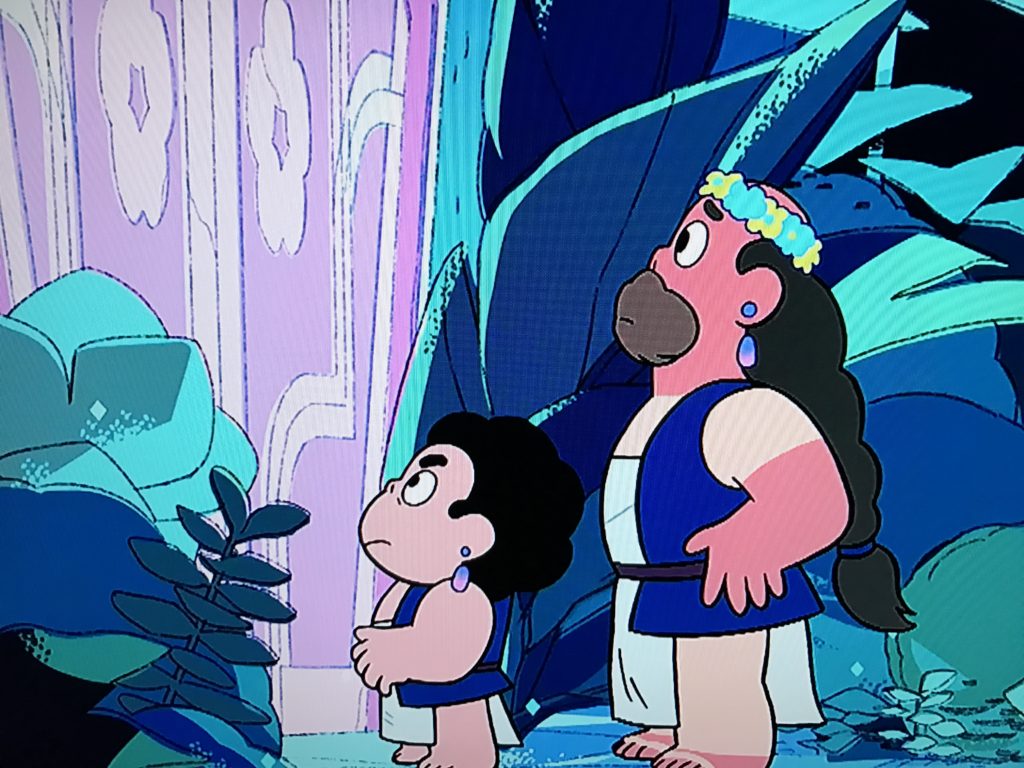 When the time finally comes, they find the door and aren’t able to open it. Two of the natives discover them pounding on it and ask what they’re trying to do. When Steven and Greg explain that they want to open the door, the natives don’t really have a concept of what that means. One of them does know a story that the door opened once and a Gem came in to help a human who was hurt. She only knows the words of the story, though, because the natives have no concept of open doors or hurt.

Steven and Greg spot an opportunity, and Steven punches Greg in the stomach as hard as he can. The door doesn’t open, though, and the voice in their earrings alerts them and all of the natives to the fact that it’s time for “The Choosening.” The natives insist that Steven and Greg accompany them to participate in this special ritual. 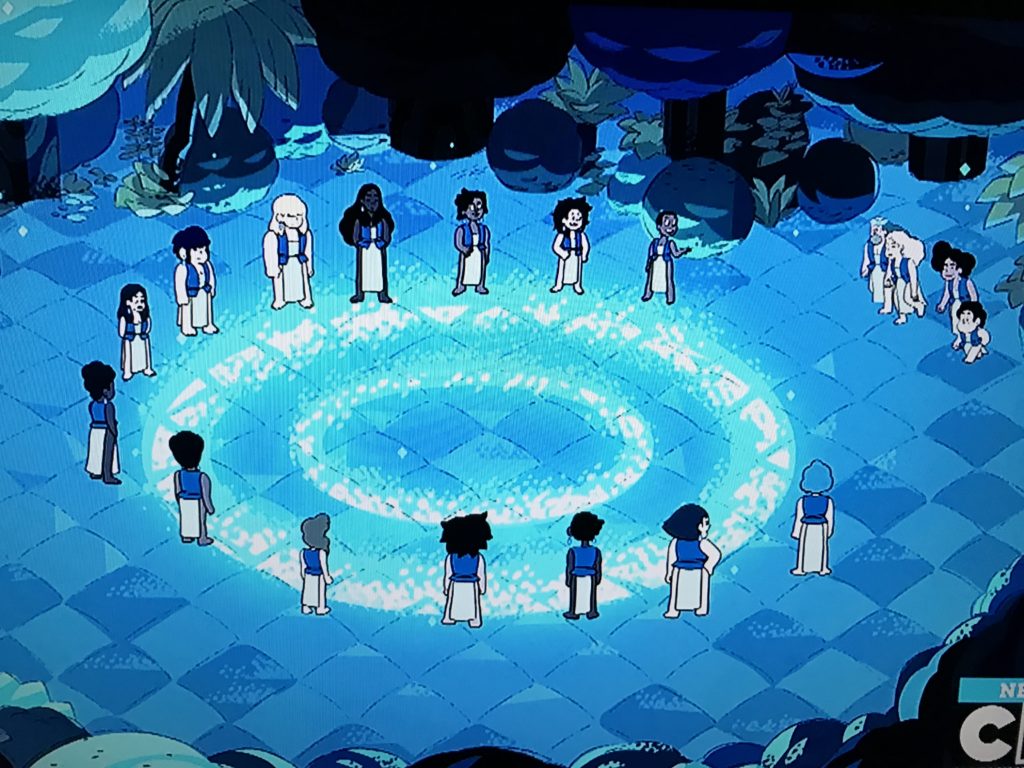 Steven is asked to stand back, but Greg is invited into a circle with all of the natives. The voice then “choosens” pairs of people to come together. Greg finally comes over to Steven’s perspective on the problems of a utopian society with no free will when he’s assigned to choosen a native woman.

Steven and Greg try to explain the concept of choosing your own romantic partner, and the natives all pick Greg as theirs. When Greg explains that the choosing has to be reciprocal, and that he doesn’t choose any of them, all of the natives become emotionally undone. 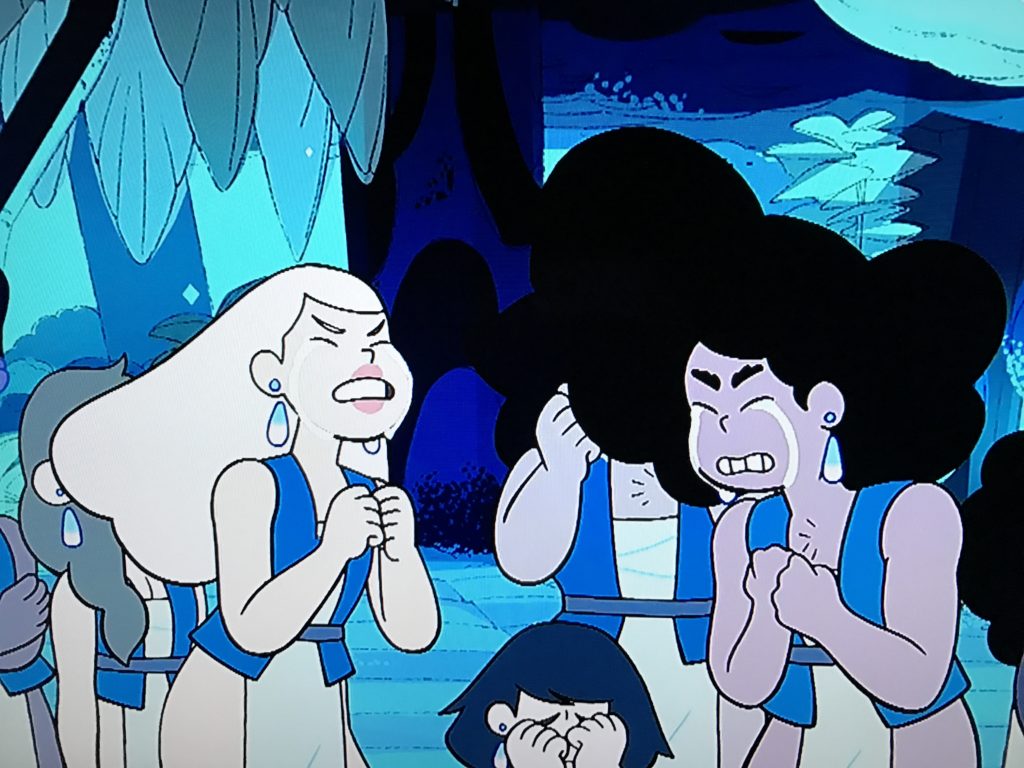 Steven and Greg make a run for it, and the sobbing natives give chase. This emotional upheaval is enough to trigger the intervention of a team of Amethysts, who come dashing through the service door to calm the natives. 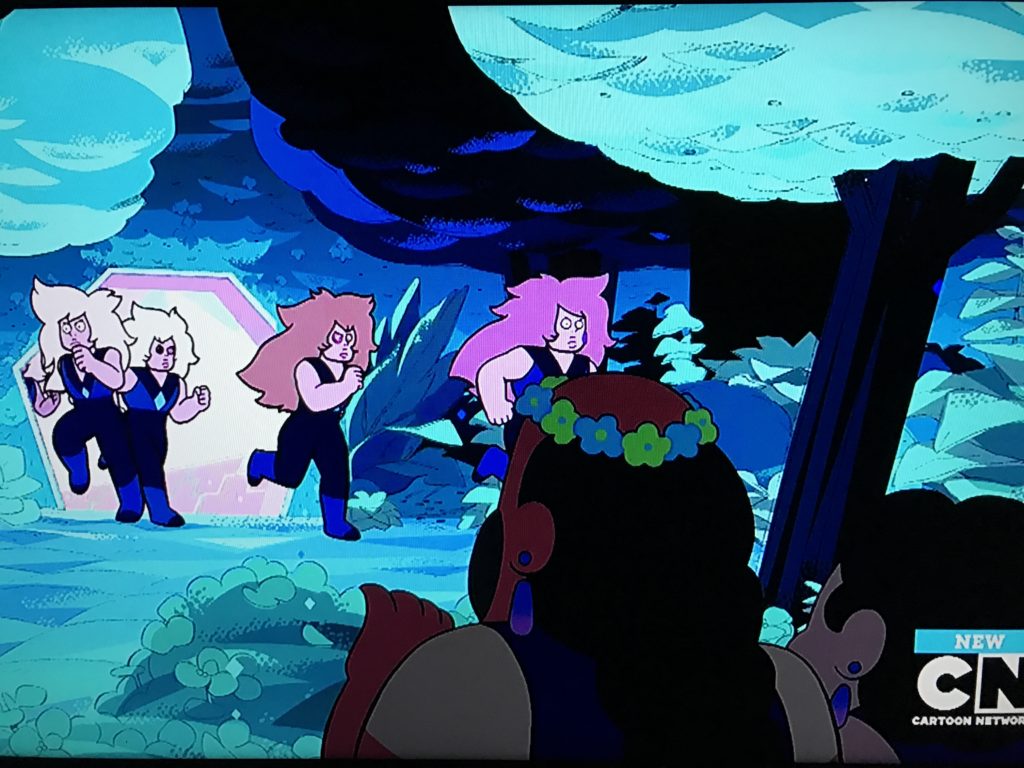 Noticing that the door is standing ajar, Steven and Greg sprint towards it, but they are intercepted by an angry looking Amethyst who tells them they’re in big trouble, and… THE END. 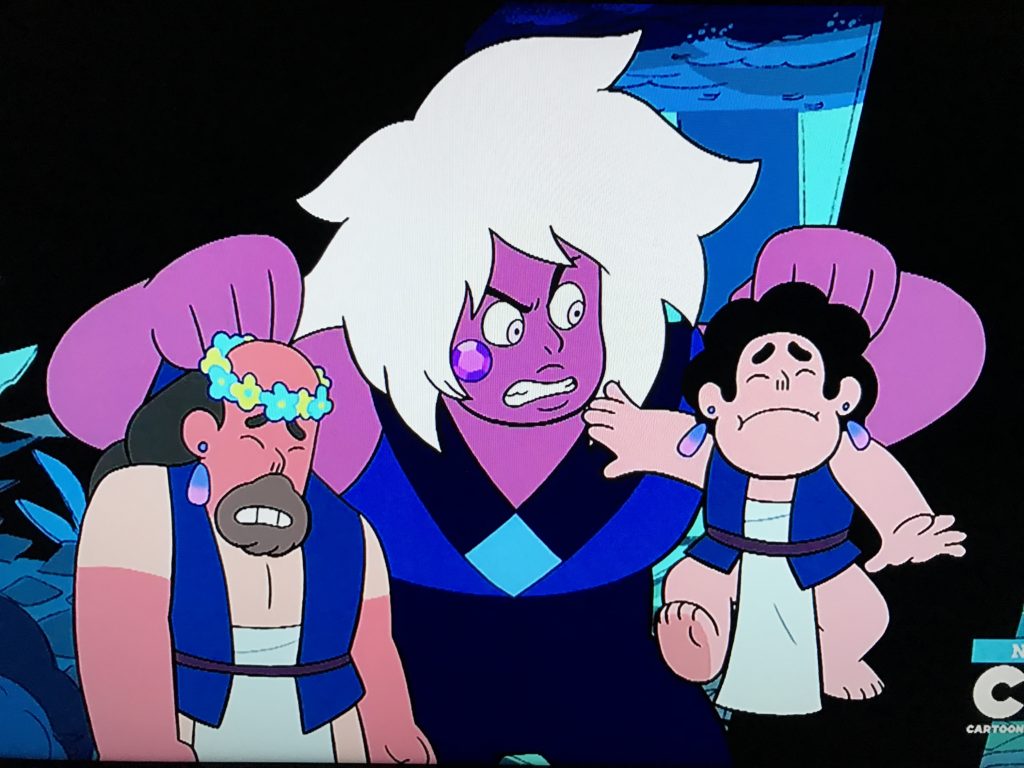