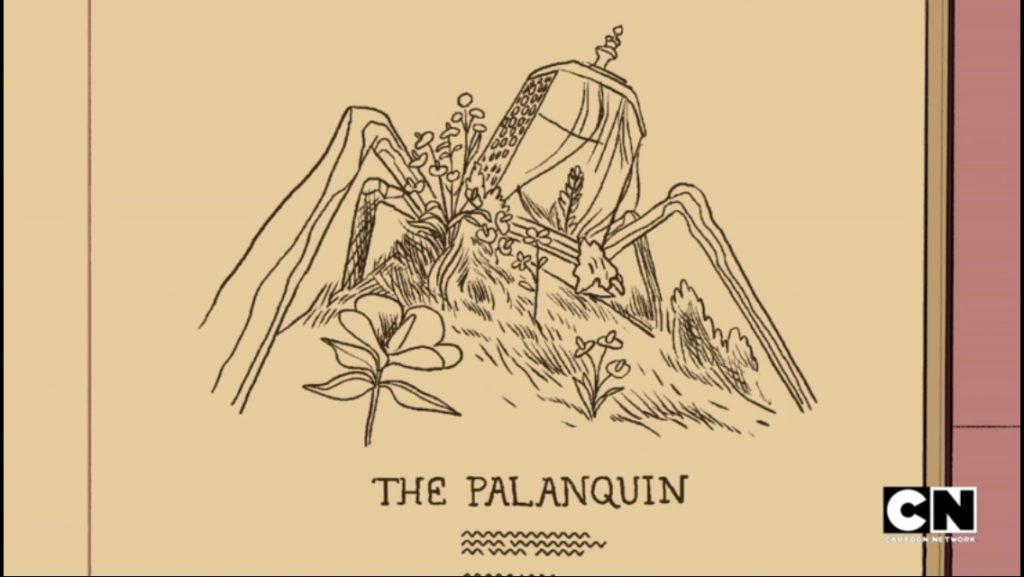 At last! New episodes of Steven Universe! And even better: TWO new episodes back-to-back. When the news is getting me down, I can always count on Steven and the Crystal Gems to pick me up.

In the first of today’s two new episodes, Steven’s Dream, Steven and Greg are watching an alien abduction flick in the back of Greg’s van when Steven falls asleep and dreams of lovely pink blossoms waving in a breeze. Greg wakes him up because he’s crying in his sleep, and when he gets home to his own bed, Steven falls right back into the same dream. This time, he’s there long enough to have a look around and discovers a pink pod evocative of the ones we’ve seen in the Kindergarten, only fancy. 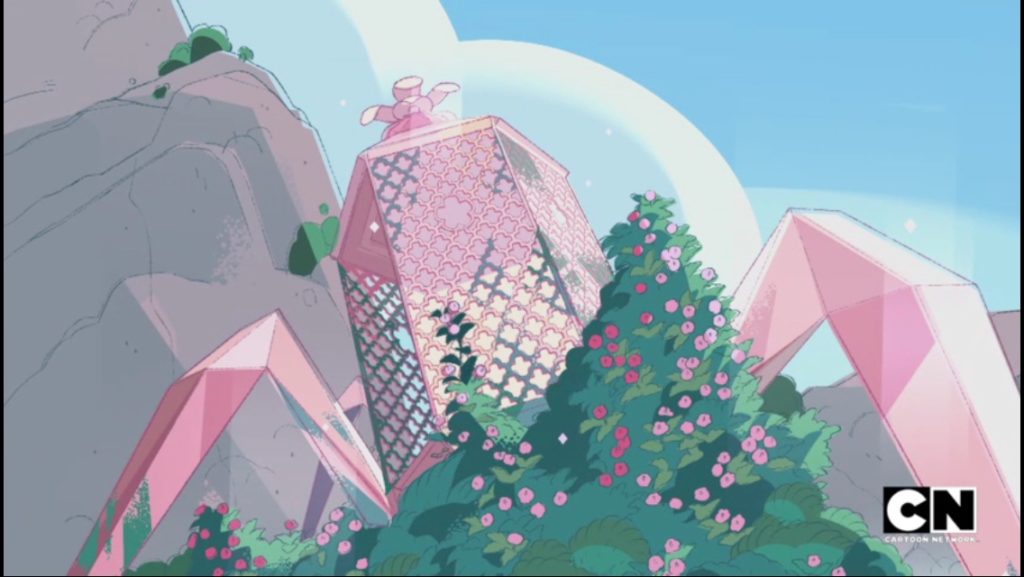 The next day, Connie comes over with “Buddy’s Book,” and they quickly identify the pod as The Palanquin, a Gem relic identified on Buddy’s map as being in South Korea. The Crystal Gems arrive while Steven and Connie are studying the illustration, and they gleefully ask for information about the thing Steven has been seeing in his dream. 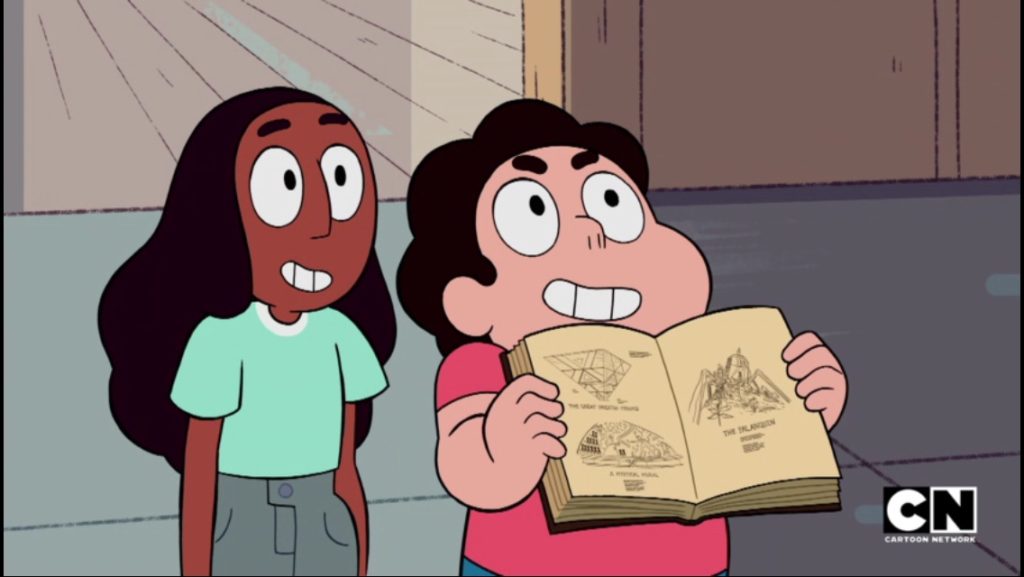 Amethyst is able to honestly say that she has never seen it and doesn’t know what it is. Pearl tries to change the subject, and Garnet uncharacteristically snaps at Steven that they aren’t going there– that he can’t go there. 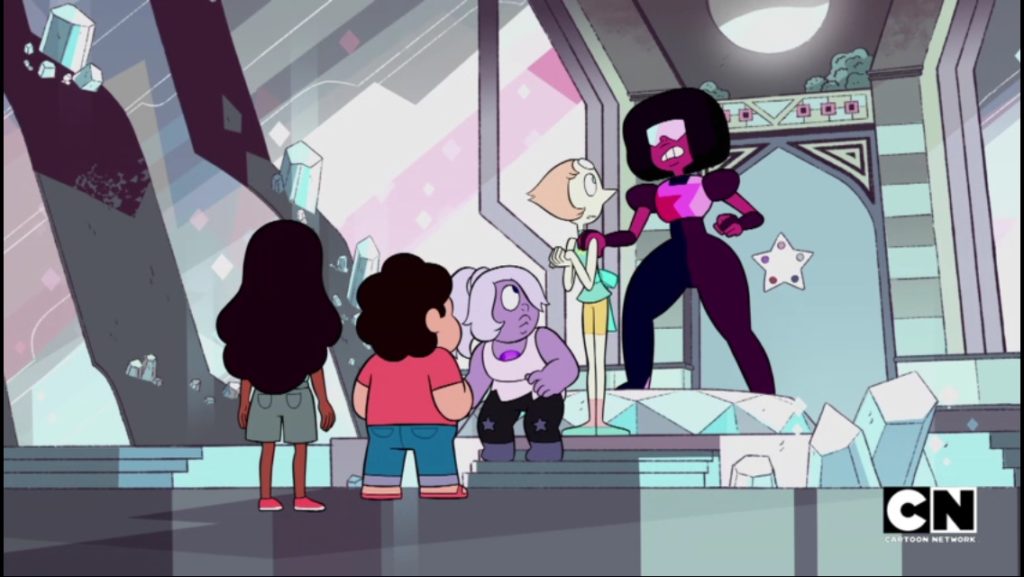 Steven reacts with an equally uncharacteristic outburst, demanding honesty and answers, but Garnet says that Rose Quartz never wanted him to go to that place. He storms out, and when Garnet follows, her vague efforts to stop him from going only ignite a more urgent desire in him. 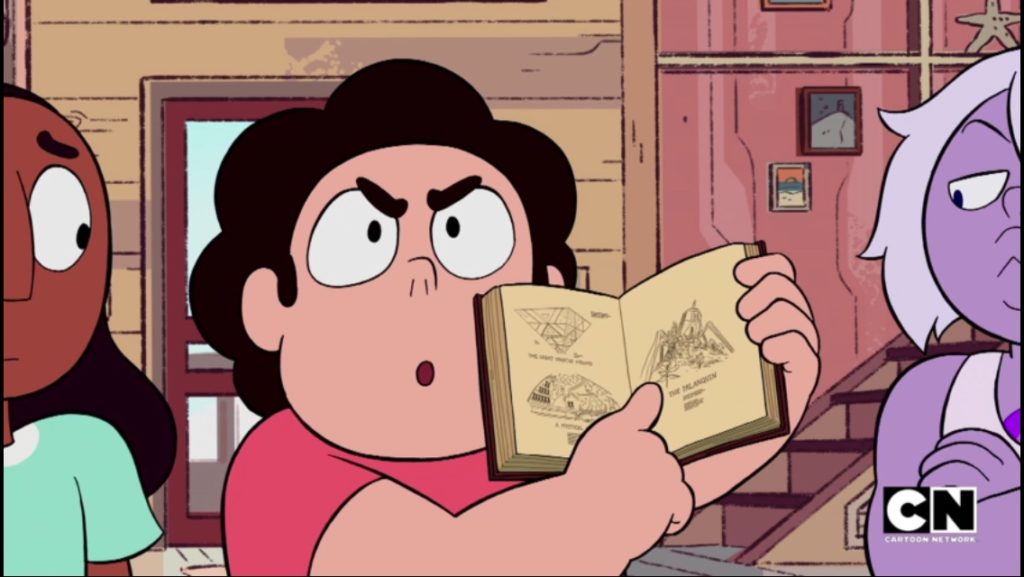 Steven goes to Greg to ask him for help getting to South Korea so he can find The Palanquin, and Greg readily agrees. He calls in Uncle Andy to fly them there in his biplane, and they manage to fit in some sight seeing and a charming montage of trying on Korean fashions before seeking their quarry. 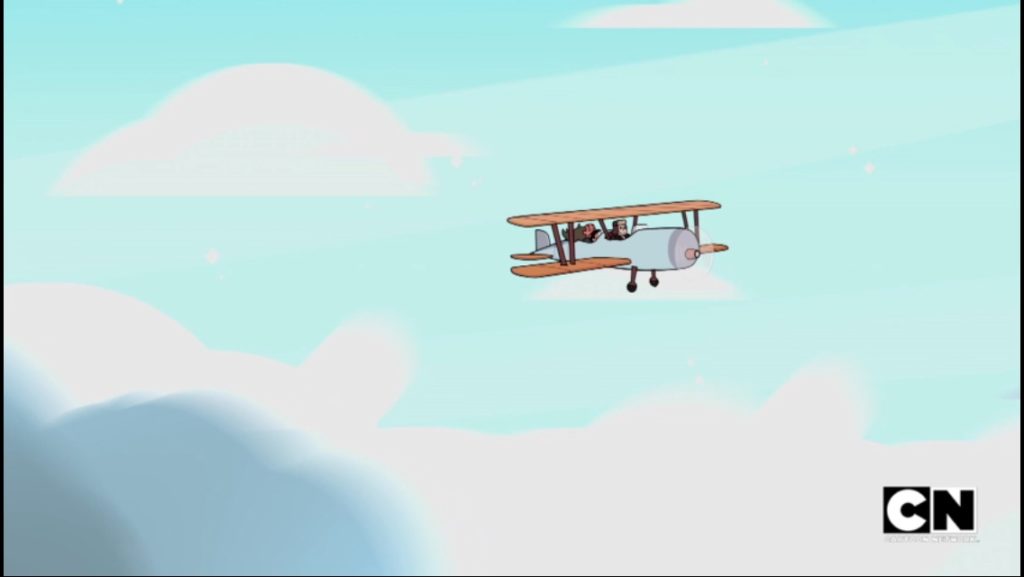 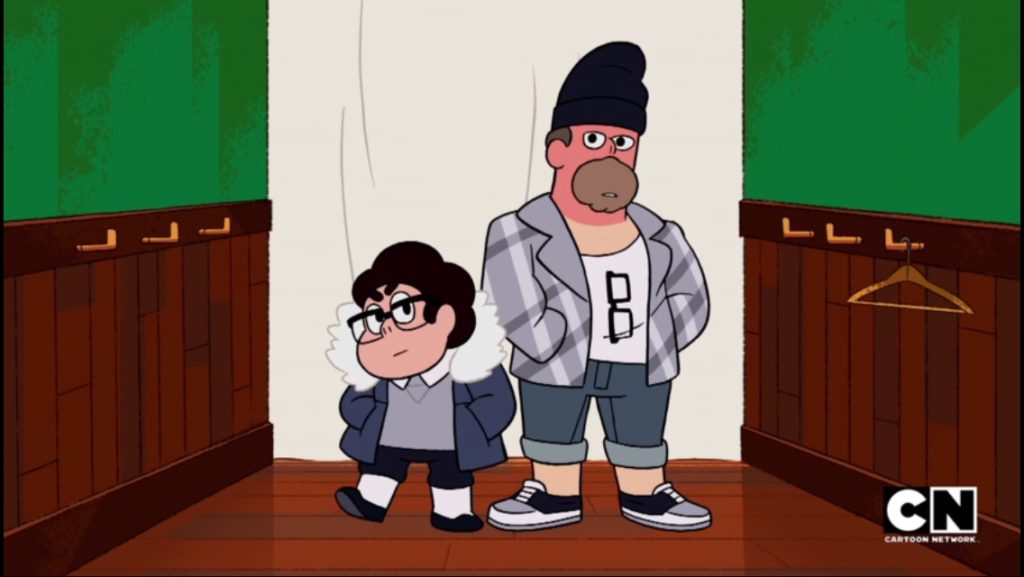 Once they’ve found the spot, Steven is surprised that The Palanquin isn’t a pink ruin like he’d seen in his dream and the drawing, but a blue pod in perfect condition. 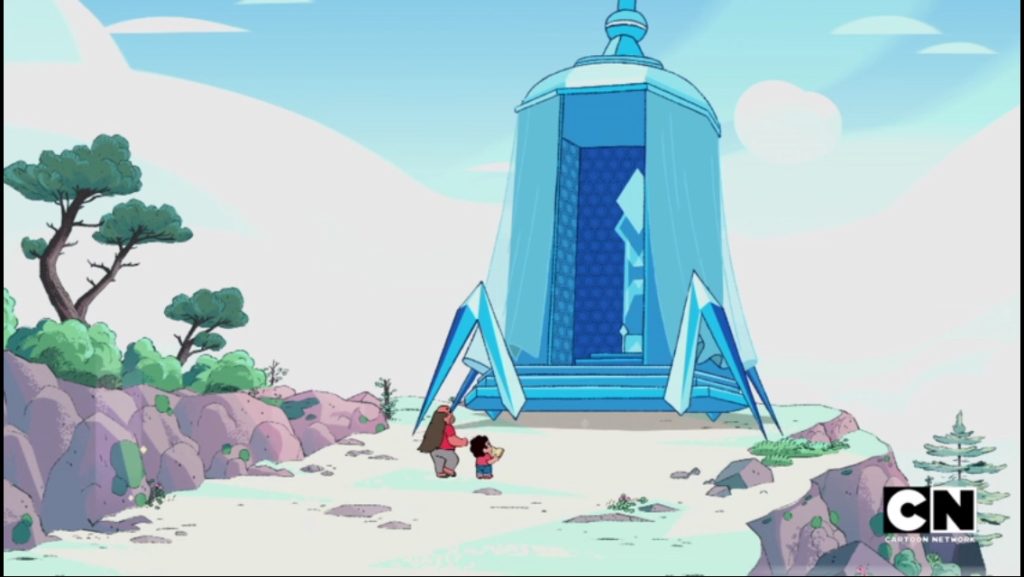 On closer inspection, they discover the pink one behind a hedge and see BLUE DIAMOND (Lisa Hannigan) and her Pearl at its base. 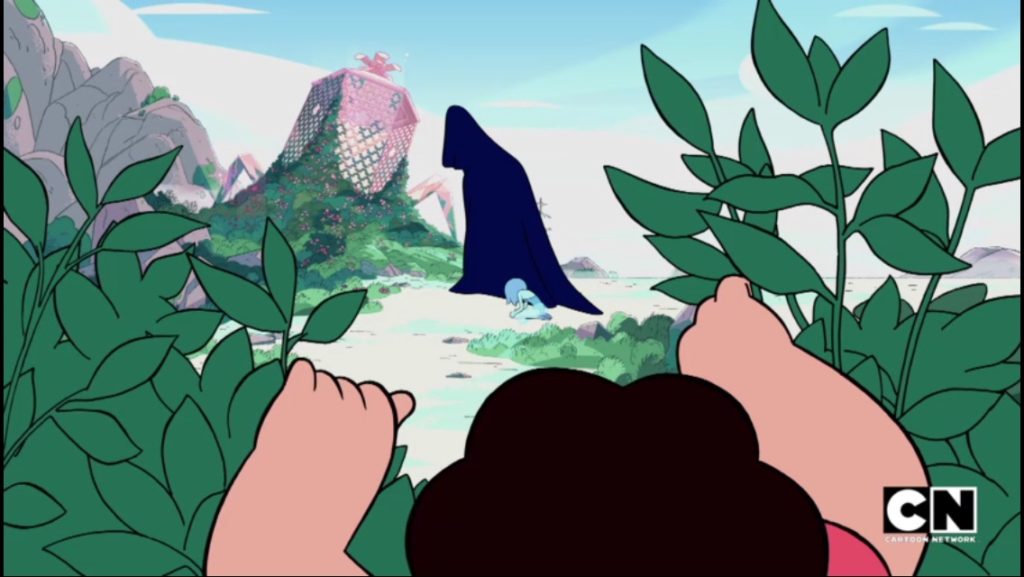 The Pearl hears them in the bushes and comes to investigate, and Greg steps out to intercept her before she can find Steven. The Pearl presents Greg to Blue Diamond, whose grief is causing the tears Steven has been crying in his dream– he’s been seeing through Blue Diamond’s eyes and crying her tears. 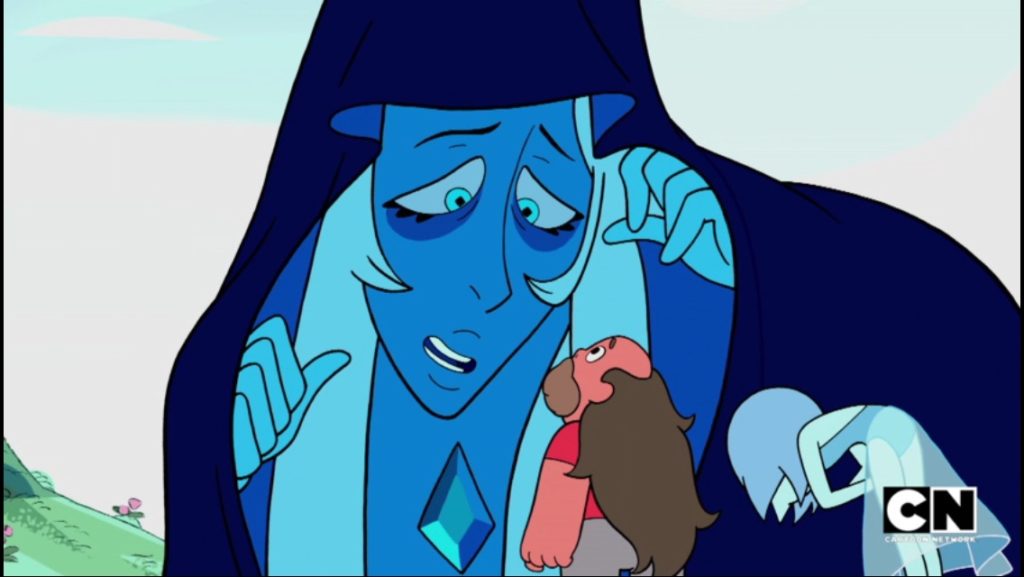 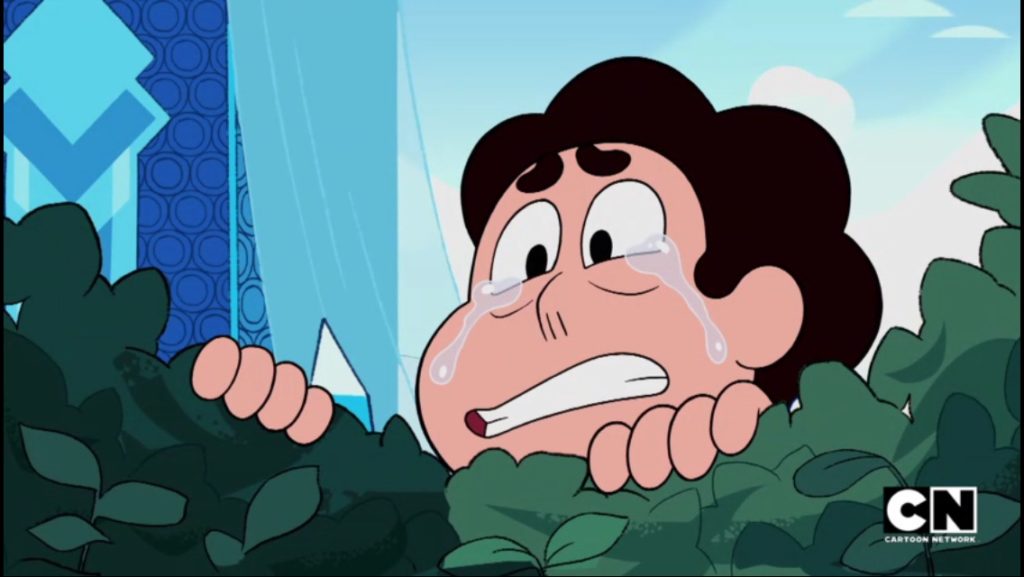 Greg offers solace and empathy to Blue Diamond, who is so impressed by a mere human’s ability to understand how she feels that she decides to save him from the “geo weapon” that Yellow Diamond has apparently assured her will end everything (Earth?) soon. She picks Greg up like a little toy, summons her blue hand spaceship, and leaves so quickly that Steven is left behind. 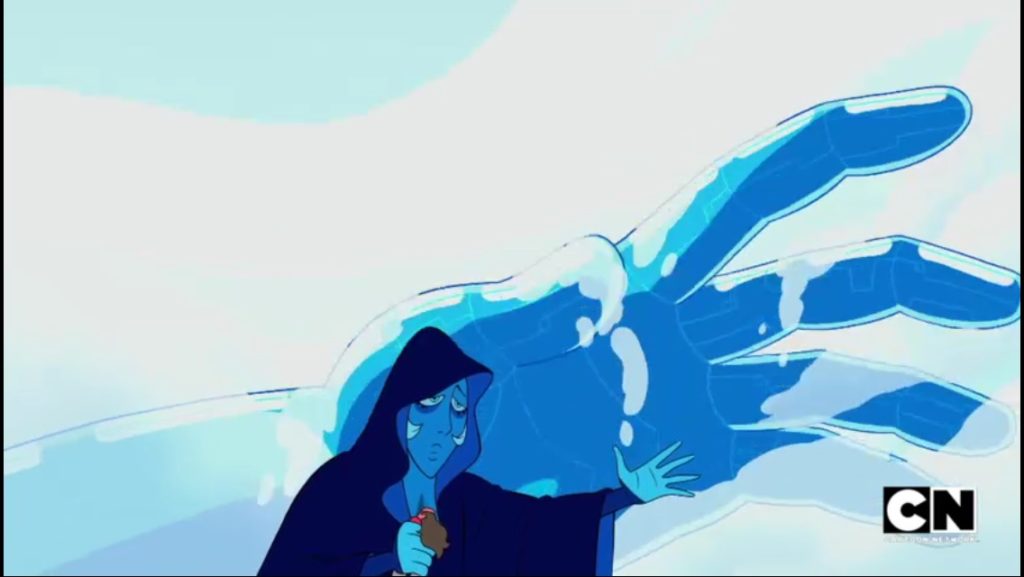 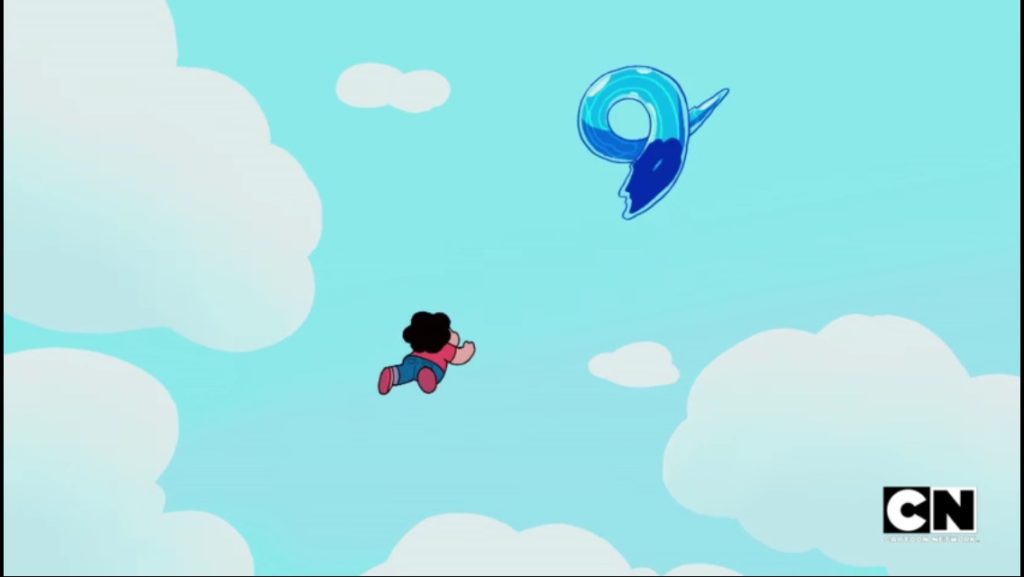 When Steven jumps after the spaceship, it speeds away and leaves him falling back to Earth. Fortunately, Garnet has followed him there and catches him. She explains that she couldn’t go with him because she’d foreseen Blue Diamond using her to find the other Crystal Gems. Now that they’re reunited, though, she promises Steven that they’ll go to space to get Greg back. 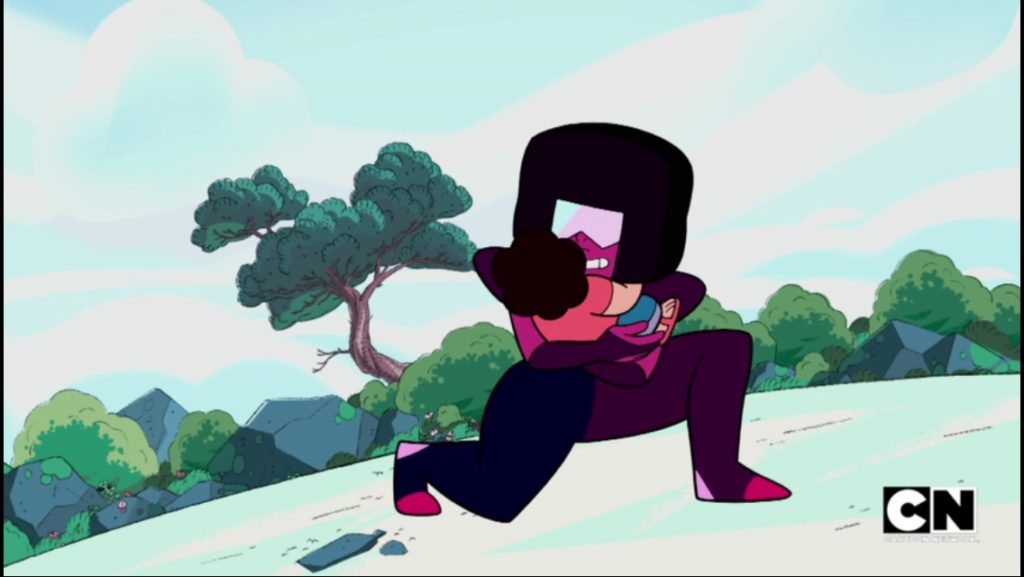 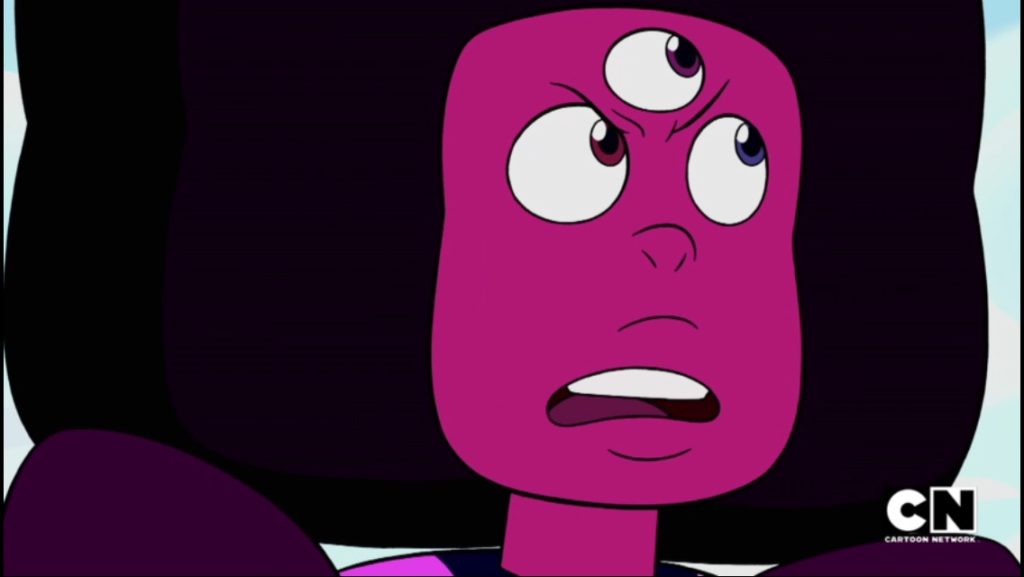 In the second episode of this block, Adventures in Light Distortion, Pearl realizes that the only place Blue Diamond could have taken Greg is to Pink Diamond’s old “Human Zoo.” The Crystal Gems decide to use the ship the Rubies left behind to go to the Human Zoo and save Greg. They leave Connie, Peridot and Lapis to protect Beach City in their absence and blast off. 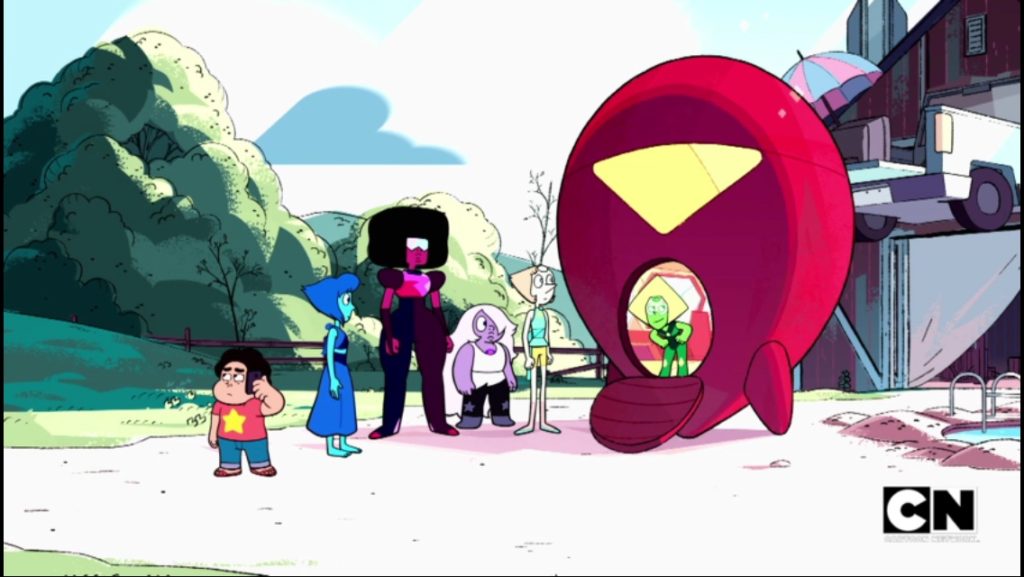 Once in space, Pearl tells Steven that at their current pace, they’ll reach the Human Zoo in 70 human years. Since this obviously isn’t fast enough, Steven engages the ship’s gravity engine and they speed forward.

After engaging the gravity engine, Steven discovers that the Crystal Gems have all changed shape– although Amethyst is less affected by their new squat forms that Garnet and Pearl. He deduces that this is the “Ruby setting” Peridot had mentioned before they took off. 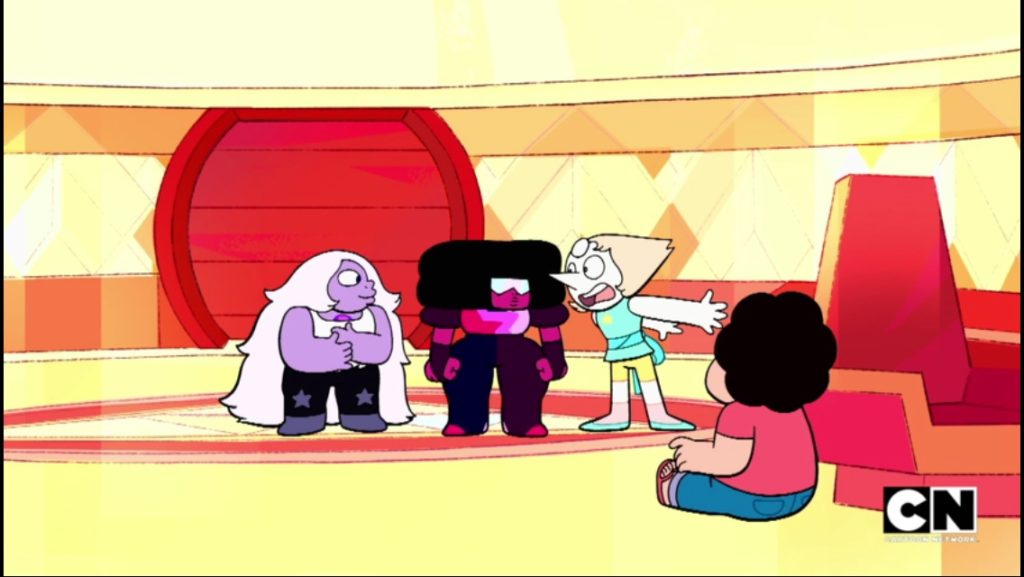 Steven begins messing with the control panel, trying to return the Crystal Gems to their correct forms, which leads to them being grown, shrunk stretched and bounced until it’s too weird even for Amethyst. Finally, a large red X appears on the control panel, and when Steven hits it, the ship leaps into a psychedelic hyperdrive and the Gems dematerialize, leaving only their gems pinned by G-force to the ship’s rear wall. 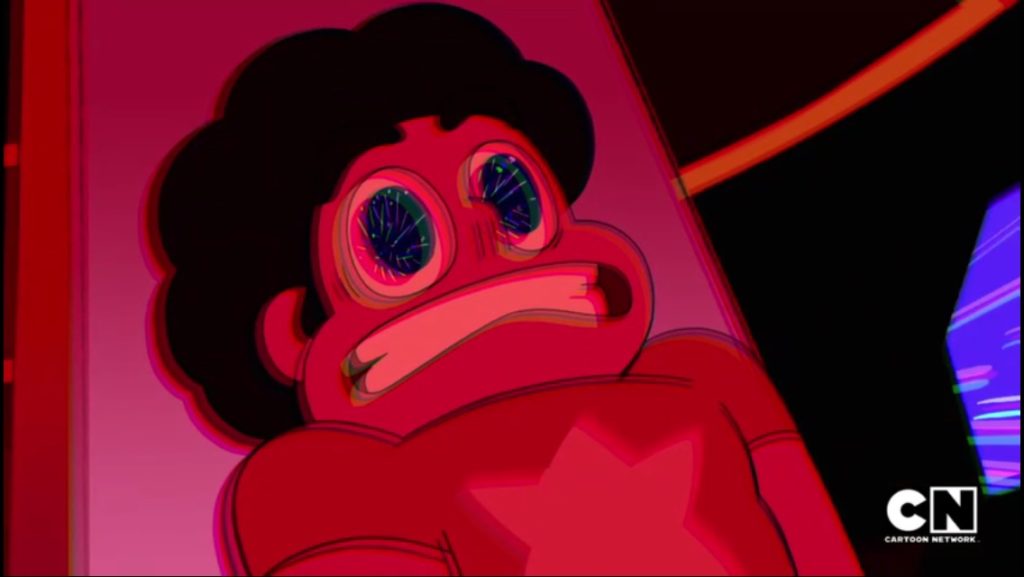 Distraught, Steven desperately tries to overcome the G-force that is pinning him to his seat to reach the control panel. He finally succeeds as he laments having put his dad, himself and the Crystal Gems in danger, slowing the ship to a stop just before it would have crashed into the Human Zoo. 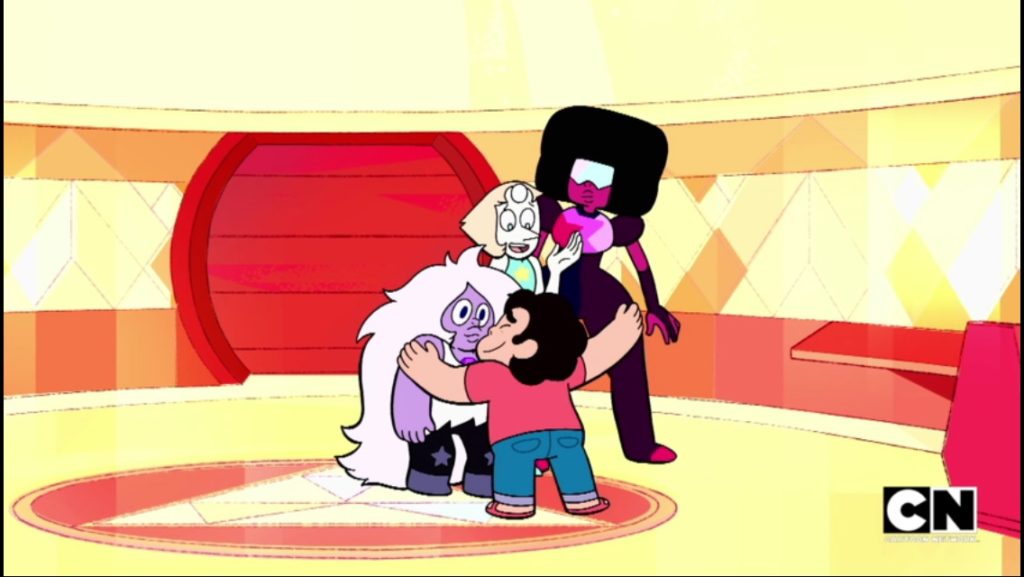 As soon as the ship stops, the Gems dematerialize, explaining that they couldn’t maintain their light-based forms while the ship was traveling faster than the speed of light (and dropping some physics on the viewers as they do). They reassure Steven that he isn’t to blame for anything, then catch sight of the Human Zoo outside. 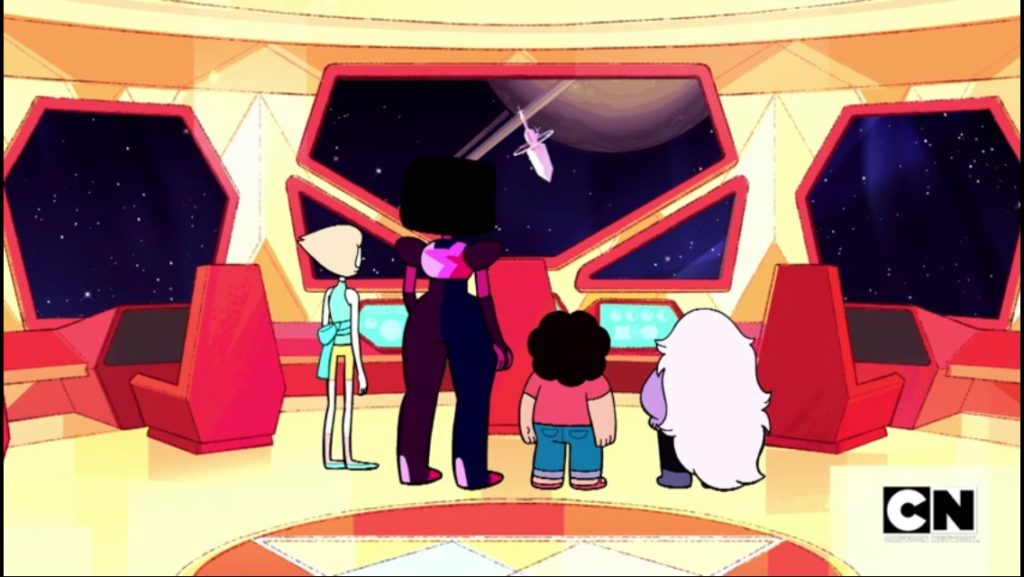 This week's #SaturdayMorningWebtoons highlights two #Webtoon series that are so captivating you will struggle to put them down. Add #TheShadowProphet and #Asterion to your reading list and thank us later! https://www.geekgirlauthority.com/saturday-morning-webtoons-the-shadow-prophet-and-asterion/