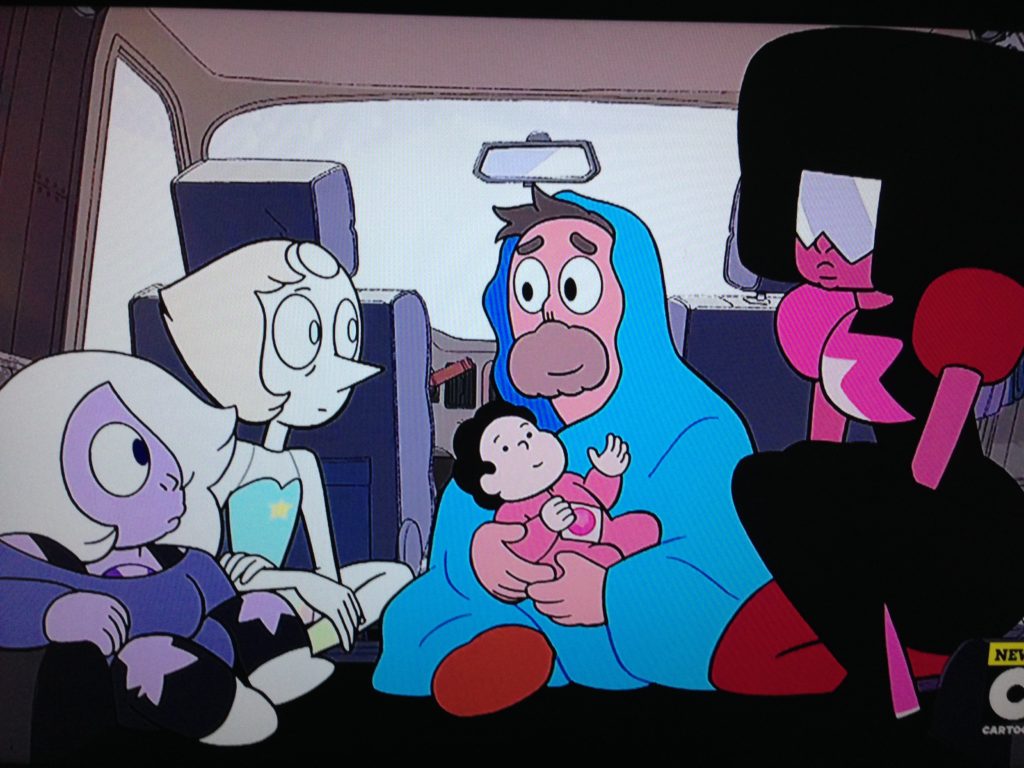 It’s a cold winter night, and Steven and the Gems are cozy around a fire with houseguest Greg during the only December episode (tears) of Steven Universe. Steven looks out at the falling snow in awe, commenting to his family that he’s never seen it snow like this before. 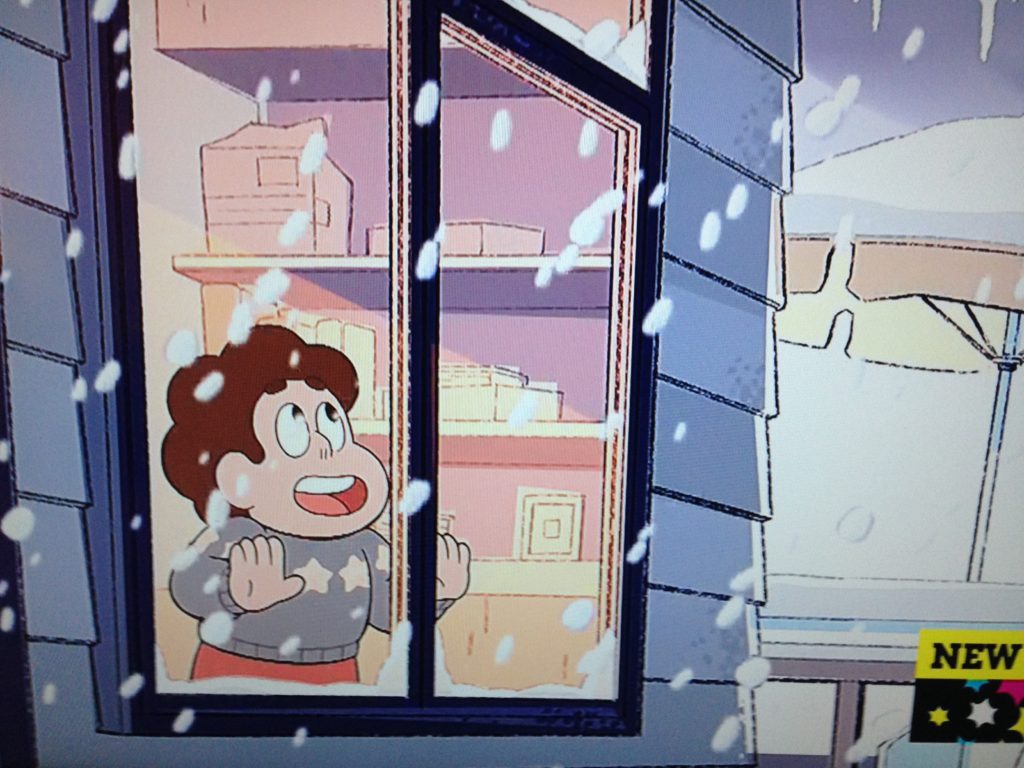 They remember it differently, and before long Greg is playing Steven a song about their earliest days together. 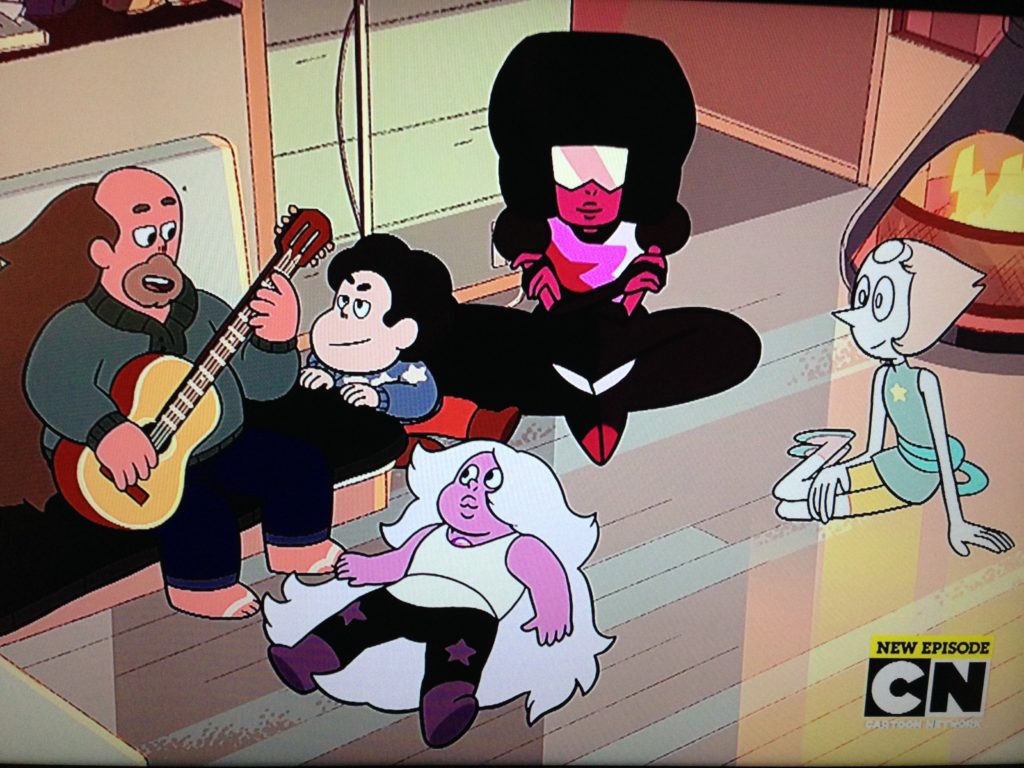 Like most episodes, this one lovingly addresses something serious without making you feel bummed out. In this case, the joy and confusion all of the “adults” feel regarding baby Steven and how to care for him is constantly underscored by their grief over losing Rose Quartz.

Pearl is visibly in mourning, Amethyst hasn’t yet begin calling Steven by his own name (calling him Rose instead) and Greg is overwhelmed and insecure in his role as single father while taking refuge from a snow storm in Visalia’s house, surrounded by photos of her with her complete family. Garnet is the most composed, but that’s kind of her thing, isn’t it? 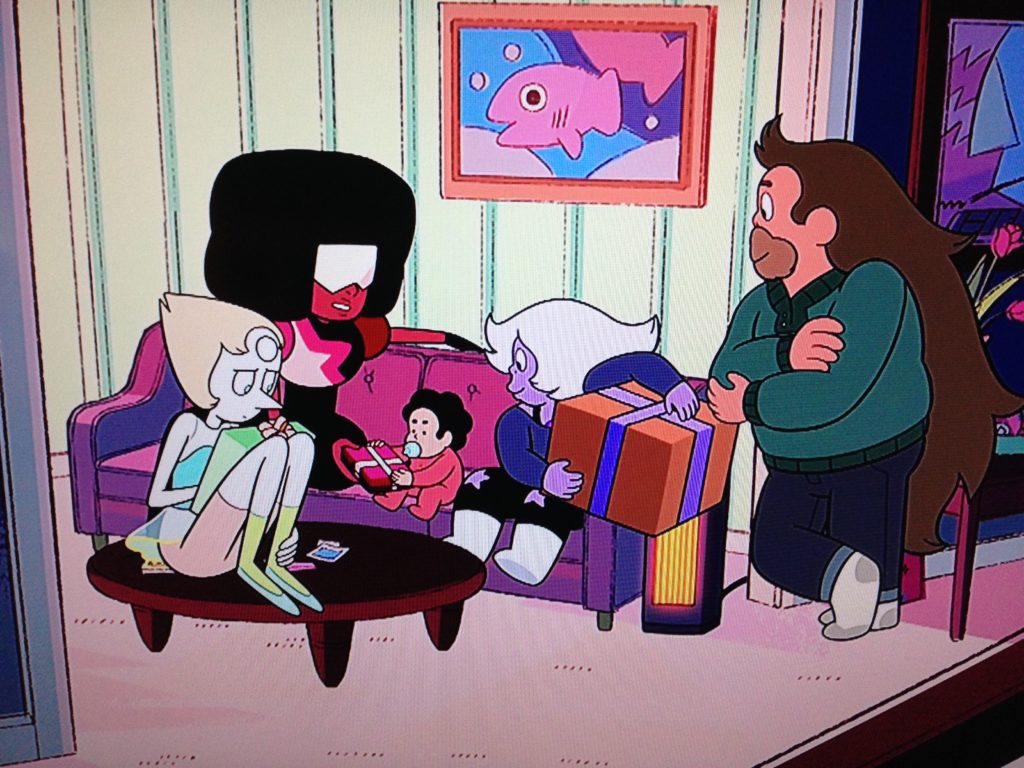 The Gems have come bearing gifts that are wildly inappropriate for baby Steven. Garnet gives him a razor, Amethyst a box of adult diapers and Pearl a dictionary. Greg explains that at this point Steven is mostly into his keys and shows them how the keys jingling on his carabiner make baby Steven laugh. When he laughs, though, HE GLOWS. 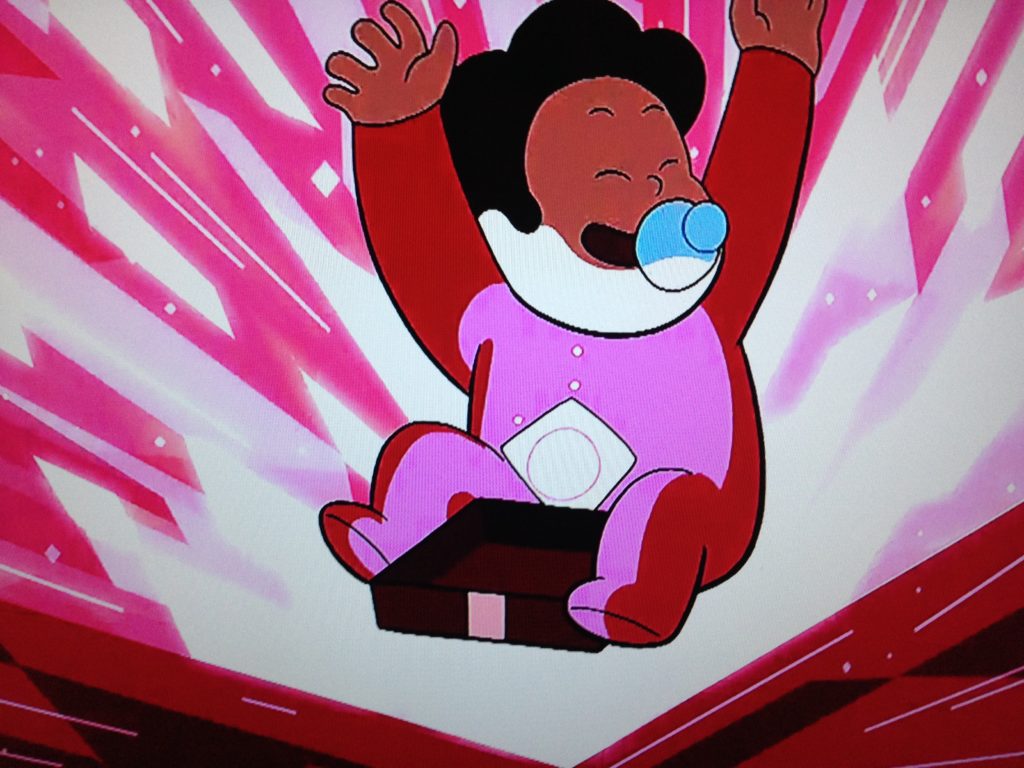 Everyone is undone by the glowing, and the Gems interpret it as evidence of Rose’s lingering presence. 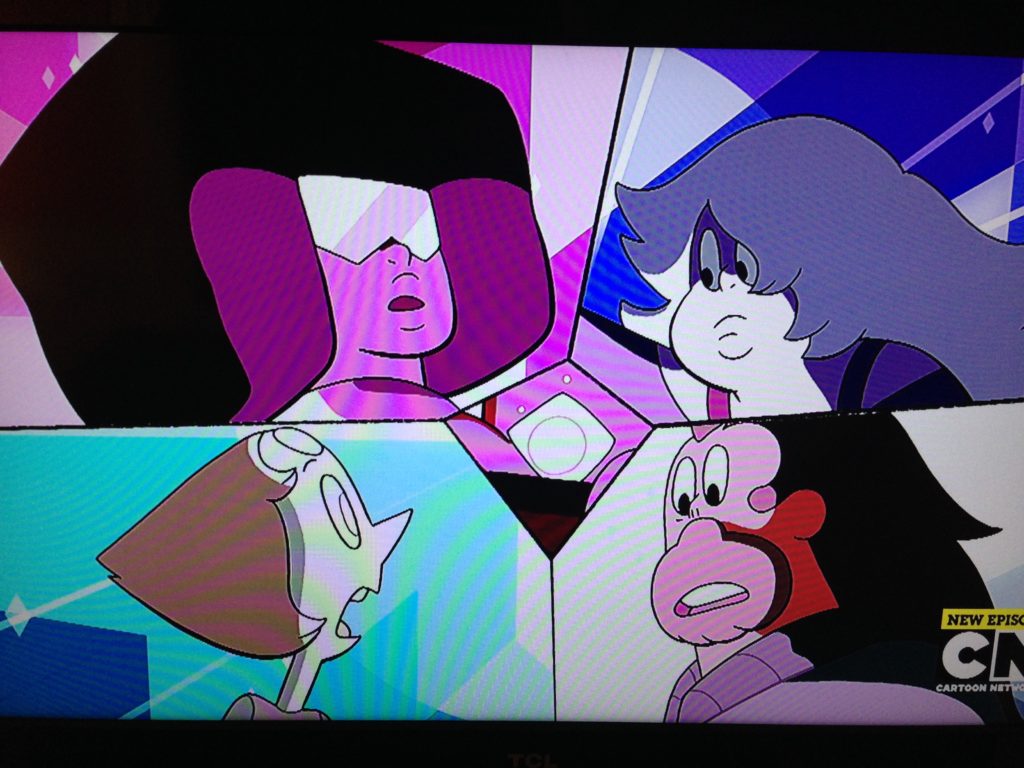 Pearl starts speaking desperately to Steven’s gem, asking Rose to confirm that she’s there. Greg goes to another room to find one of Visalia’s baby books, and when he returns the Gems have absconded with Steven and his van.

Greg runs after them through the storm with a blanket wrapped around him.

As they drive, the Gems struggle to determine what Steven is. Amethyst is convinced Steven is Rose having shape shifted and turns into a baby herself in an effort to understand its appeal. 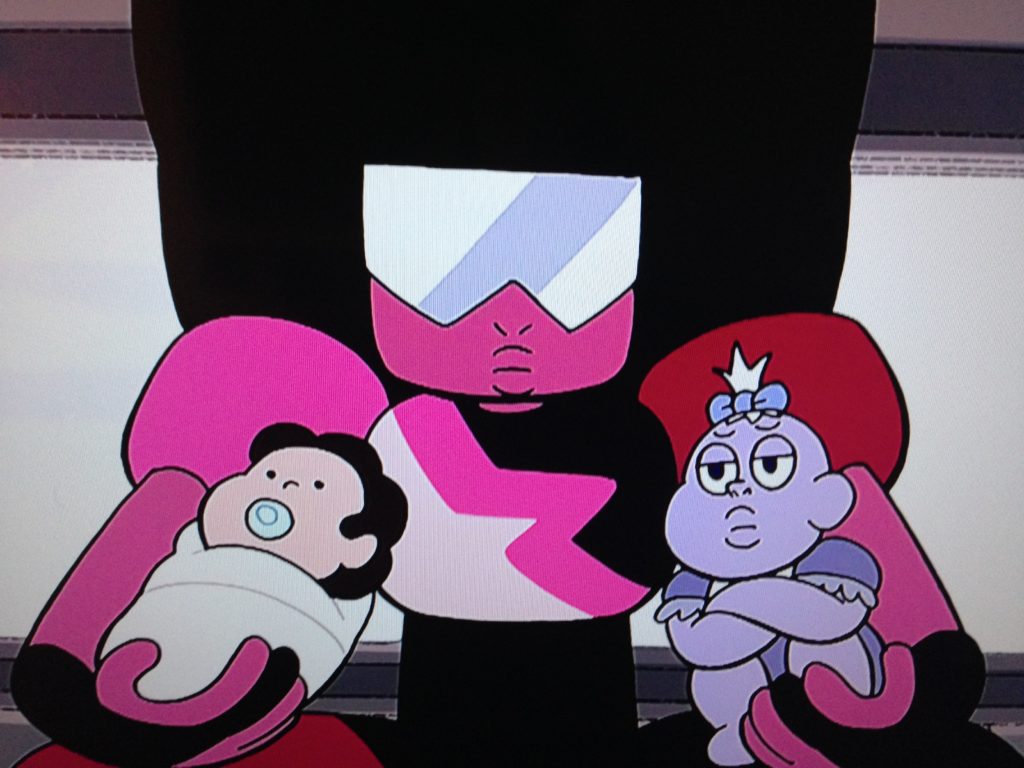 Garnet believes Steven is a fusion. Pearl seems convinced that if she removes the gem from Steven’s belly, Rose will be free to reappear. She is reaching for his gem, ready to pull on it, when something stops her. They all acknowledge that Rose wanted this very much, and Pearl has a moment of insight that where growth and change appears to be easy for humans, it isn’t for her. 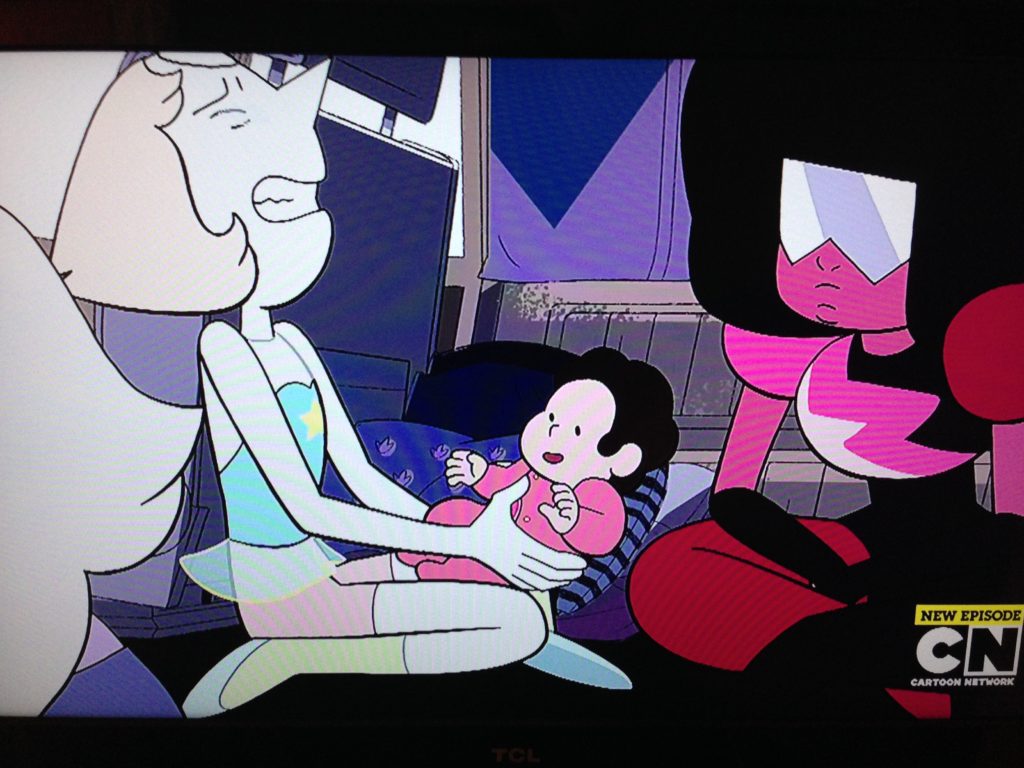 Greg catches up with them then, joining them in the van. The Gems admit their mistake in taking Steven and thinking they knew what would be best for him. Greg admits that he doesn’t really know either, but that they’d probably do better if they all worked together. 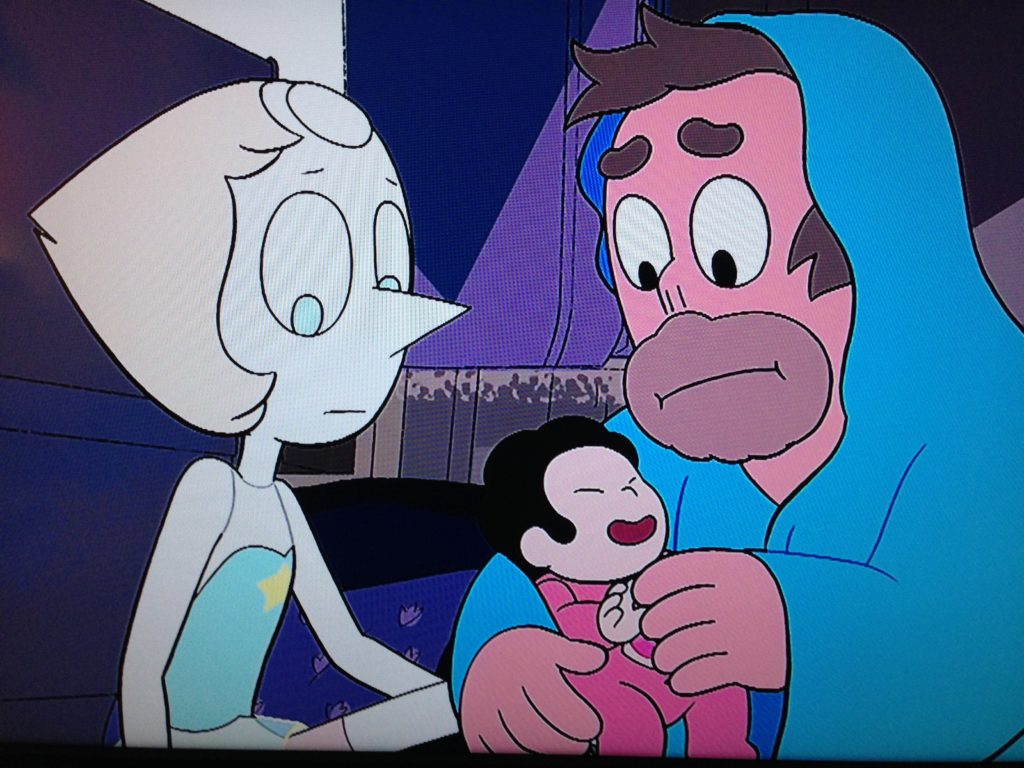 After hearing the story, Steven tells his grown-ups that he thinks they’ve done a lot of growing and changing in the last 14 years, and he’s right. 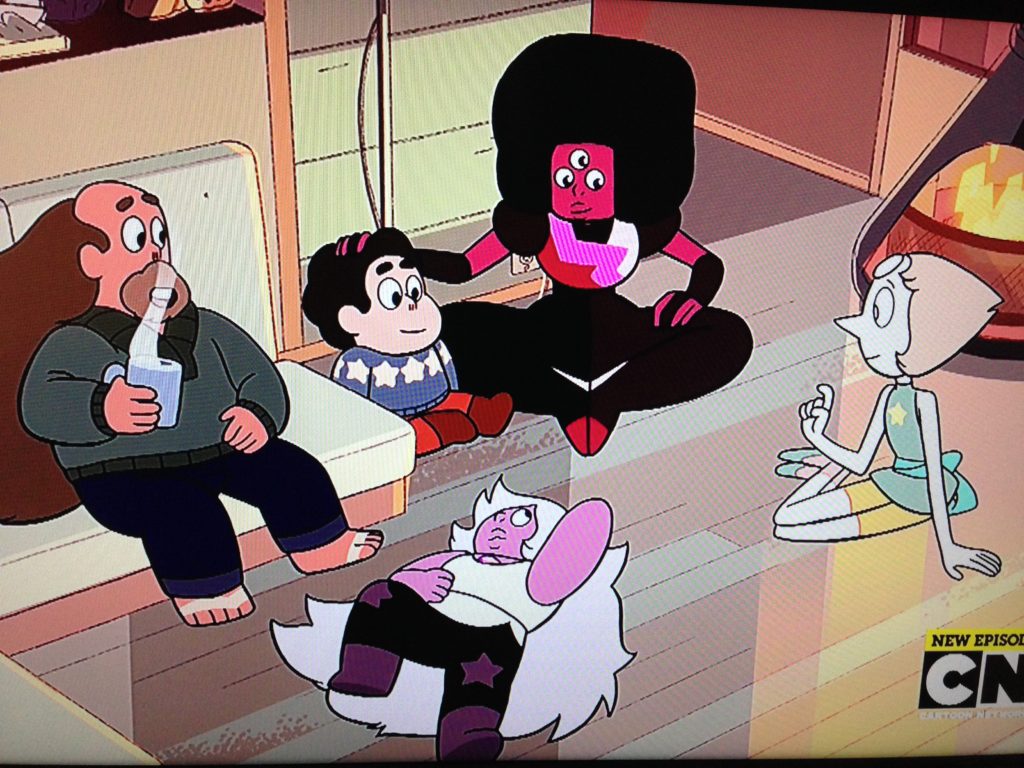