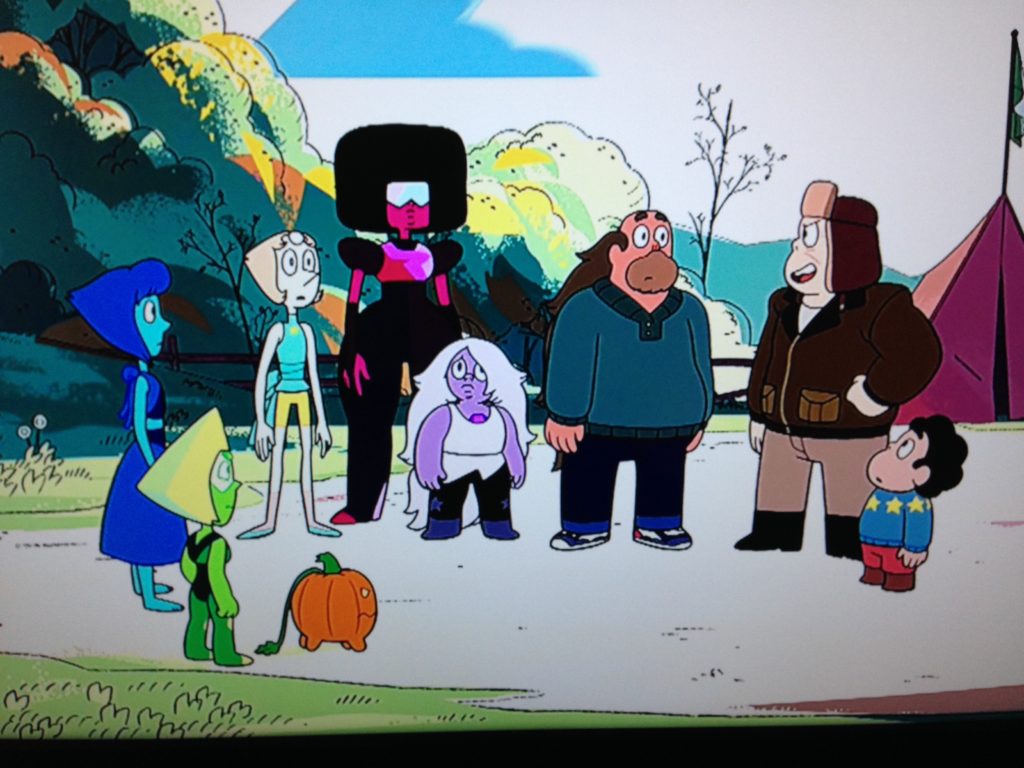 Steven Universe is critically acclaimed for its unprecedented depictions of diversity in a children’s cartoon. The program has gently addressed interracial relationships, non-hetero romantic relationships, non-binary gender identities, a variety of familial and social relationships, families with different kinds of parents filling different kinds of roles (widower, mom as primary earner, etc.) and so much more. The program’s consistent message of LOVE is stronger than a message of tolerance, and their Thanksgiving-appropriate special episode this week added another group to the list of people we should love: angry white men. 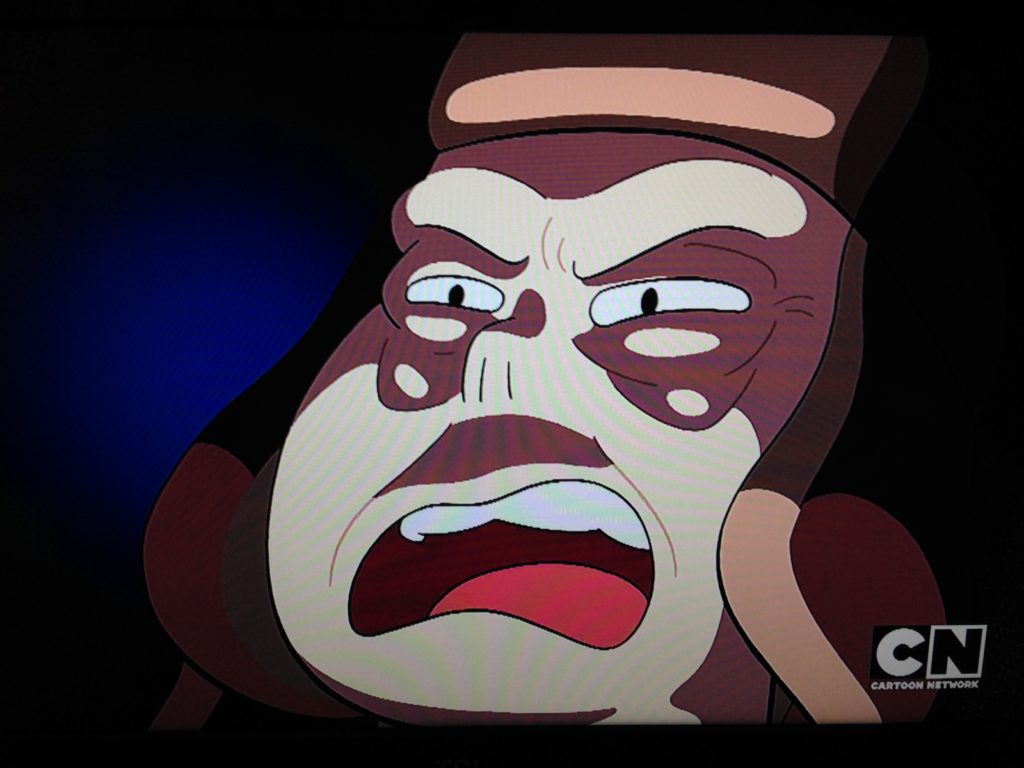 I don’t know when this episode was conceived, written or filmed, but in light of the current political climate and the constant stream of angry messages in the media and social media that indicate that the United States is deeply divided, that’s what I saw here. Our lovely, diverse group of Gems, human Greg (Tom Scharpling) and Gem-human hybrid Steven (Zach Callison) are visited by Greg’s heretofore unmentioned cousin Andy (Dave Willis, A.K.A.”Carl” from Aqua Teen Hunger Force), and Andy has a hard time with what he finds when he returns to his barn– the barn our friends have been letting Lapis Lazuli (Jennifer Paz) and Peridot (Shelby Rabara) live in. 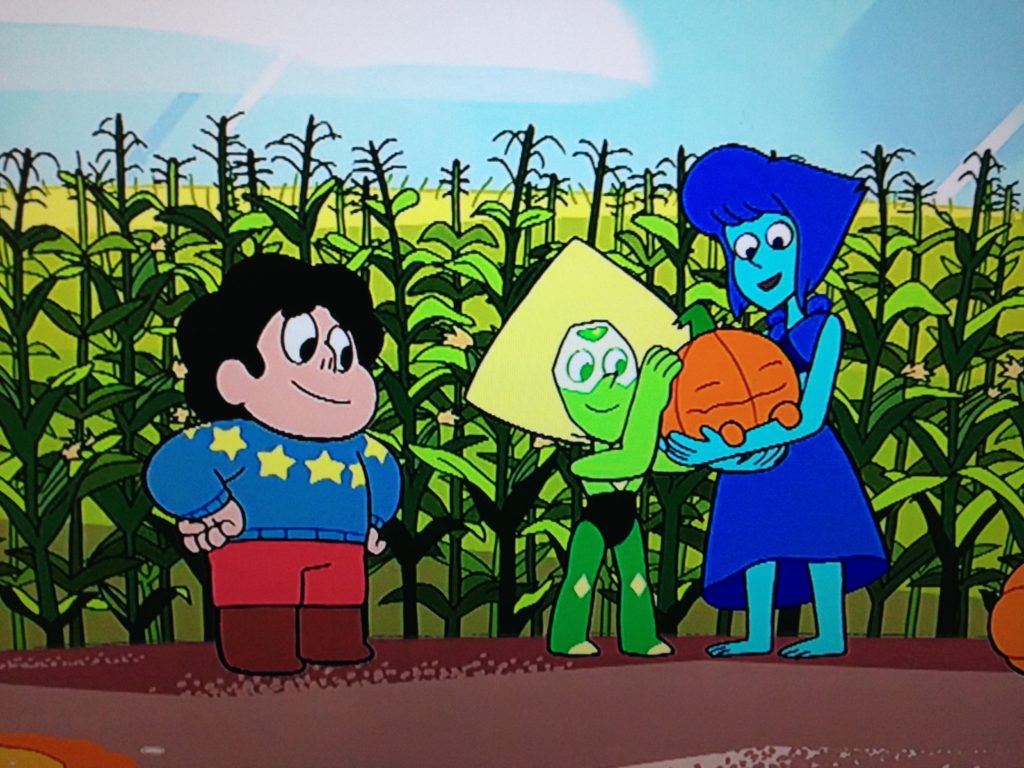 Before Andy arrives, Lapis and Peridot share with Steven that they’re experimenting with farming. They’re excited to have Steven there for what they believe will be a harvest like the ones they know from the Gem Kindergarten and that their vegetable crop will be sentient. Steven is so moved by their disappointment over having raised inert corn that he licks a seed and plants it, expecting some version of the “Watermelon Steven” incident. He succeeds, and Lapis and Peridot call him back a while later to show off the pumpkin they’ve grown that looks and behaves like a frisky dog.

Just as Steven is commenting on how nice it is to have a new addition to the family, a plane lands by the barn, and an angry white man jumps out to yell about the hoboes he believes to be squatting on his property. When Steven emerges from the cornfield with Lapis and Peridot to see what the fuss is about, Andy shouts that being a hobo is a man’s job.

Lapis traps him in a fist of water and Peridot encircles him with attack drones, holding off of attacking Andy only until Greg and the other Gems arrive. When they do, Andy and Greg recognize each other after 20 years apart and Andy asks Greg to help him run off the hoboes.

Instead, Greg introduces Andy to his son, Steven, and the Gems, his de facto in-laws. Andy’s upset is checked a bit by this, and he opens up his rage cannon on Greg for having disappeared from the family 20 years earlier and for letting anyone mess with his parents’ barn. In this exchange, we learn that Greg’s given last name is actually DeMayo and that Greg had it changed to Universe. (Steven thinks DeMayo is a cooler last name than Universe.) 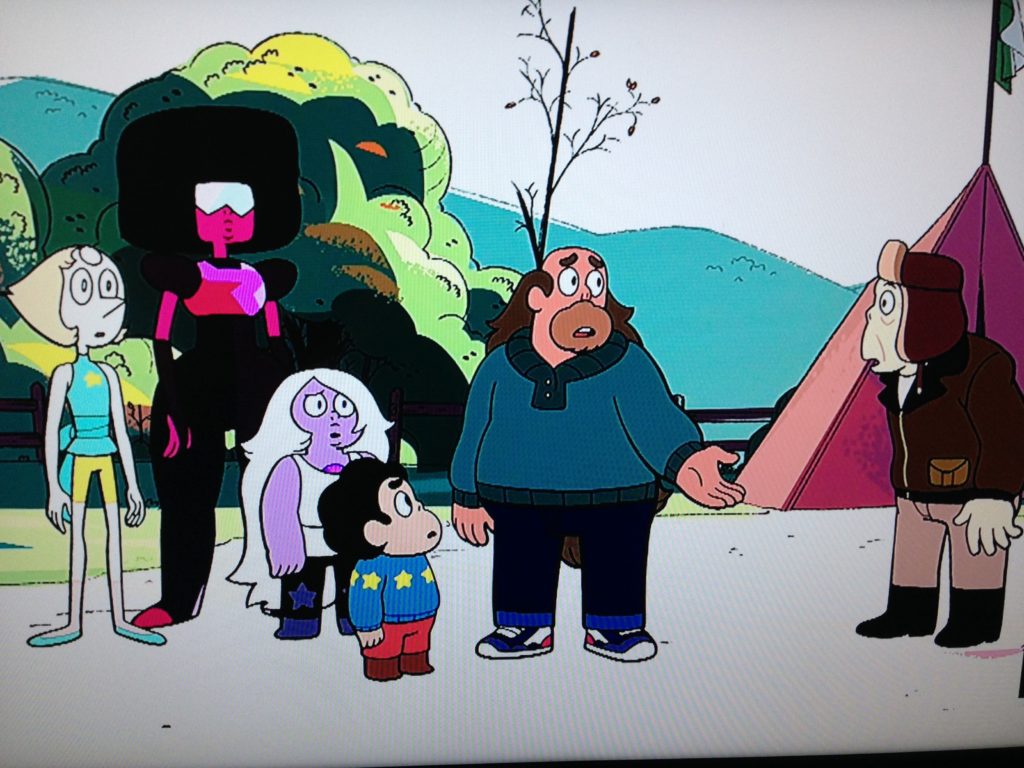 There’s a lot of specific language in this episode that supports my feeling about the message, and in this conversation Greg refers to the Gems as alien “refugees” and Andy responds with fury that they’re “illegal aliens” and that Greg didn’t marry an American. He tells the Gems to get out of his country (and planet and barn). Remembering that this show is technically for kids, I thought this was brilliant. This exchange is giving kids context and coping tools for when and if they hear phrases like these thrown around in their homes.

Steven, ever the peacemaker, intervenes. He draws out from Andy that the barn used to be the scene of annual DeMayo gatherings and invites Andy to share a meal with everyone and let them convince him that the Gems belong to their family and should stay. When Andy agrees and excuses himself to get his junk from his plane, Greg explains to Steven that Andy doesn’t usually change his mind about things.

The next short scene between Steven and the Gems is where the “love for angry white men” message starts to come into focus. Each of the Gems expresses her dislike or concern about him until Garnet (Estelle, whom I could not love more for/in this role) says that Andy is a part of Steven’s family and they should make an effort to get on his good side for the sake of their family. 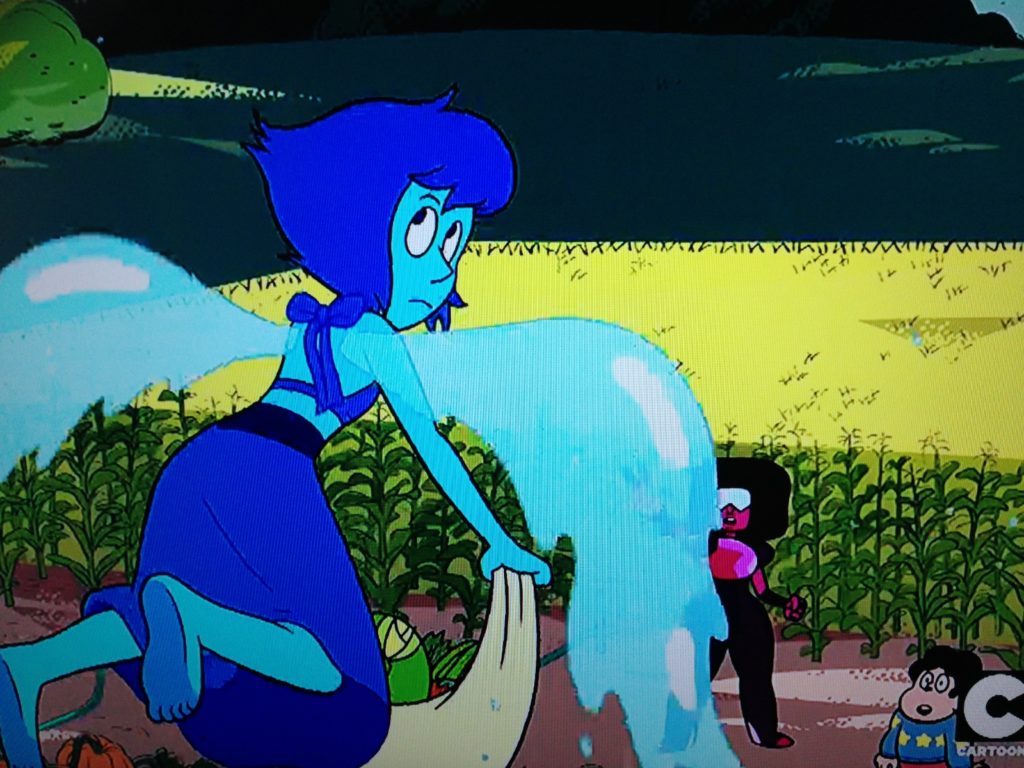 The Gems begin harvesting vegetables for the big dinner, in a Gem-typical way. Andy expresses dismay over their apparent vegetarianism and offers to buy Steven a stick of pepperoni for his birthday. Moments later, Andy discovers that Pearl (Deedee Magno) and Peridot have converted his parents’ old plane into a stove and cooktop. His face turns bright red, and he shouts that his heirloom has been taken and ruined, while the Gems retort that nobody was using it and now it is useful. 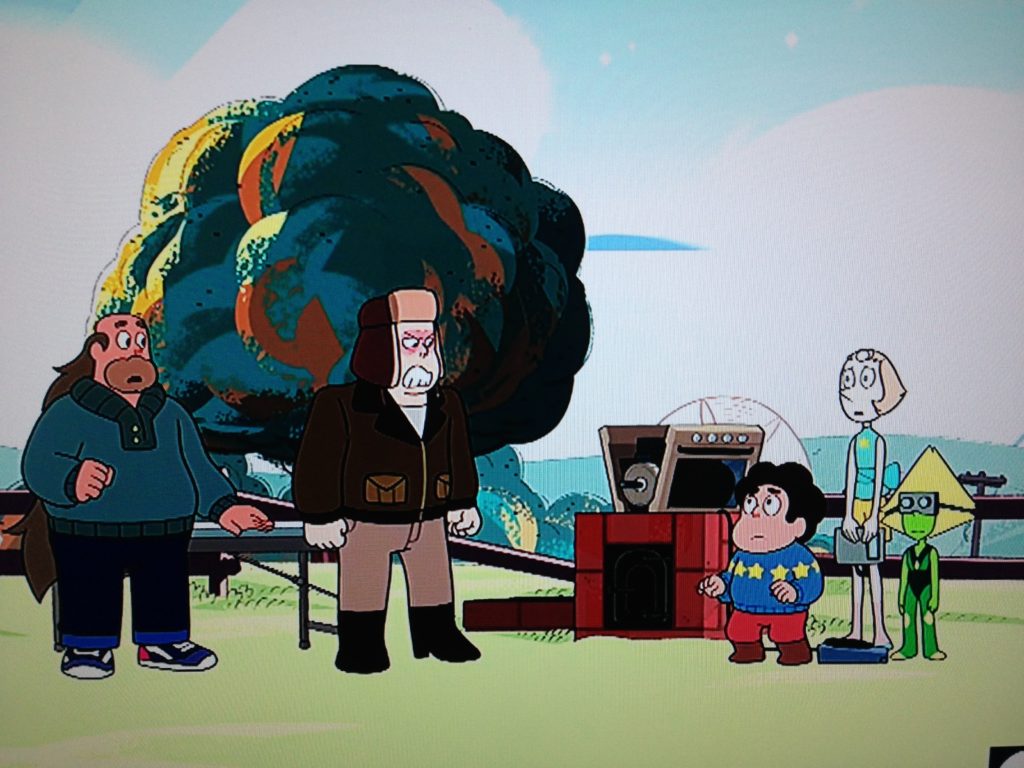 Greg and Andy exit to fight it out, and we hear Andy shout “What do you mean you weren’t technically married?” offscreen. Steven tells the Gems they need to up their party game and dispatches them to get everything they need for the best party ever.

While the Gems are gone, Steven discovers that Andy can peel a potato with a single slice, that there’s also an Aunt Deb and that Andy has been all over the world. While telling Steven and Greg about his world travels, Andy’s loneliness peeks through a crack in his veneer.

The Gems return with party elements for every celebration within the human lifespan: a wedding cake, an “It’s a Boy” balloon and a gravestone. This makes Andy laugh, and he removes his hat and suggests that they buck another norm and start with eating dessert first. 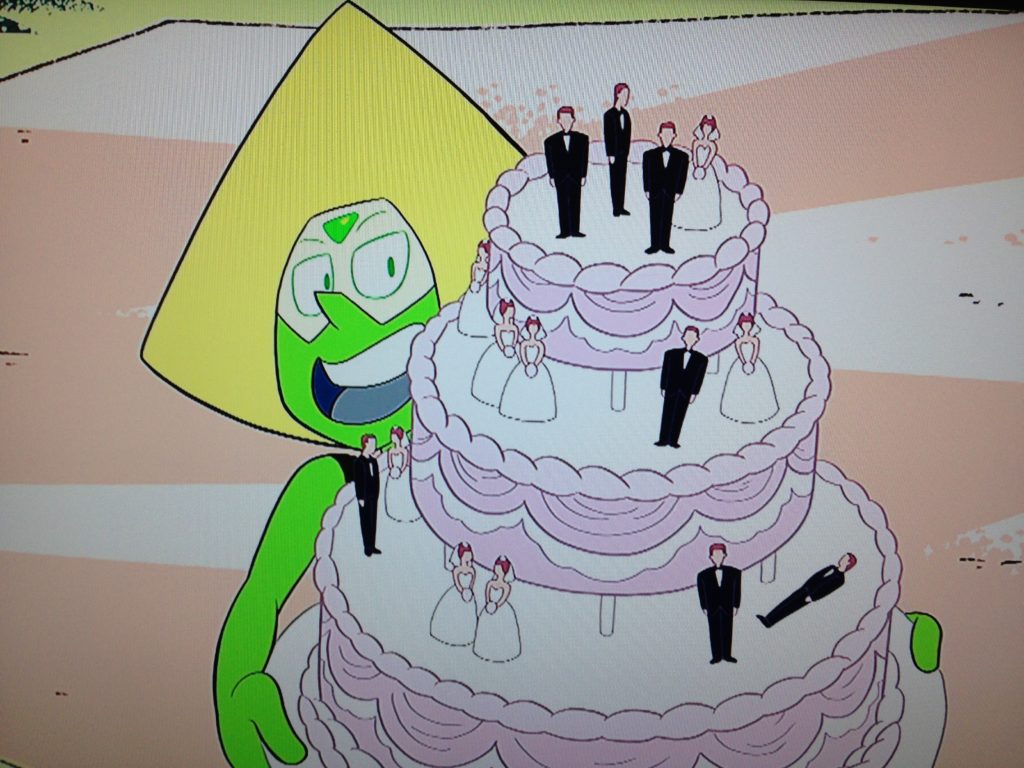 “We heard you like marriage, so we thought, ‘Why don’t we all marry each other?'” – Pearl

At the dinner table, Andy learns that the Gems don’t eat. Then the Gems start bantering easily with Steven and Greg while Andy gets a little shut out. This conversation is amazing, though, airing all of the history of the present Gems in the guise of light quips. It peaks with Lapis referencing how long she was trapped in the mirror and laughing as she says how much she hates “the table,” the metaphor for Earth that they’re playing with. 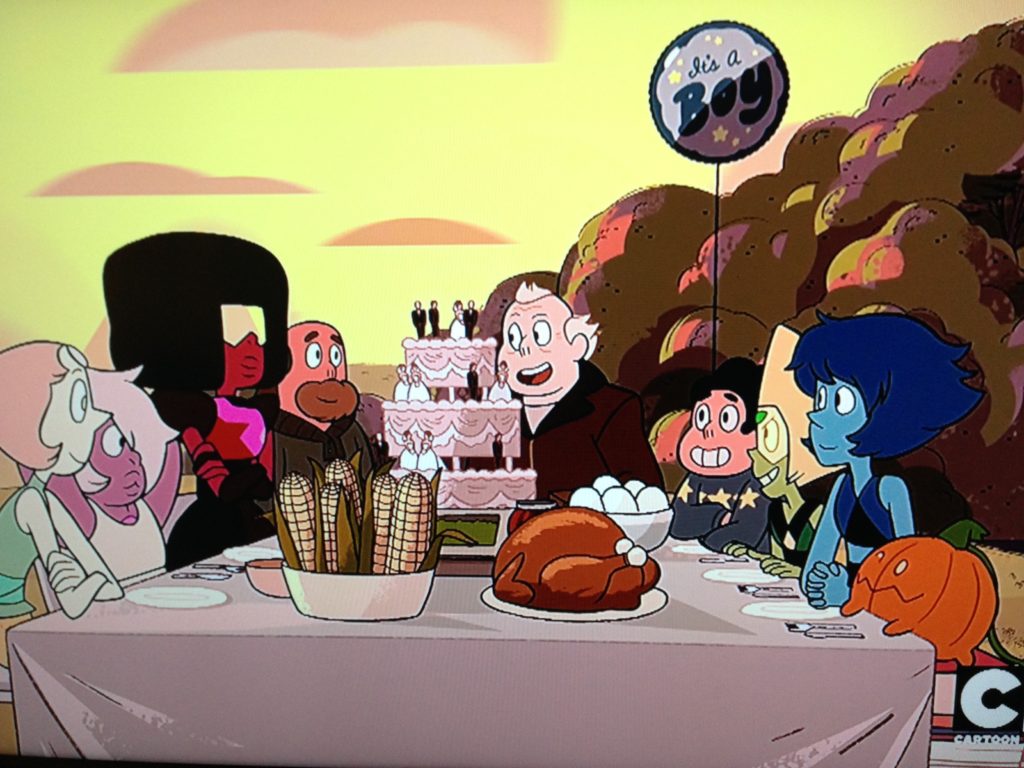 Next, the group goes around the table expressing gratitude for their roles in creating the feast. Andy is almost left out, but Peridot comes up with a short speech for him that is, as she puts it, sentimental. Andy looks dejectedly at his piece of cake, which bears a lone male wedding topper, and offers them the barn. Then he leaves in a huff and is in the air within a minute.

Steven, unwilling to accept defeat, has Lapis fly him up to talk it out with Andy as he departs. In this airborne conversation, Andy shares that everyone in the family stopped attending the annual family gatherings for different reasons, leaving him alone. Steven doggedly follows him, forcing the conversation to continue, ultimately by having Lapis throw him onto Andy’s plane. Once there, Steven tells Andy all the things he already loves about having found a member of his human family, diffusing the anger with LOVE. 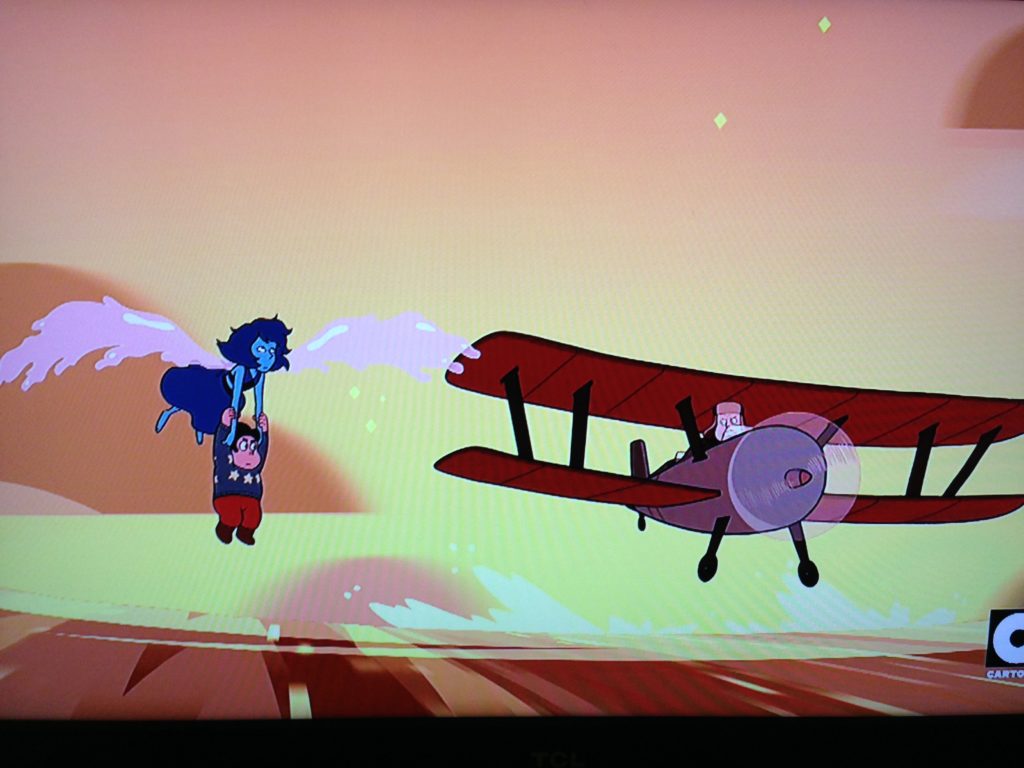 Guys, Andy’s anger is a mask for his feeling alone and left behind. Once Steven removes the mask with love, Andy realizes that he didn’t have to be alone all that time– that he was so determined to hold on to the way things were that he’d never tried to adapt to the way things are. Steven assures him that it isn’t too late, and they return to the barn to resume the family dinner. 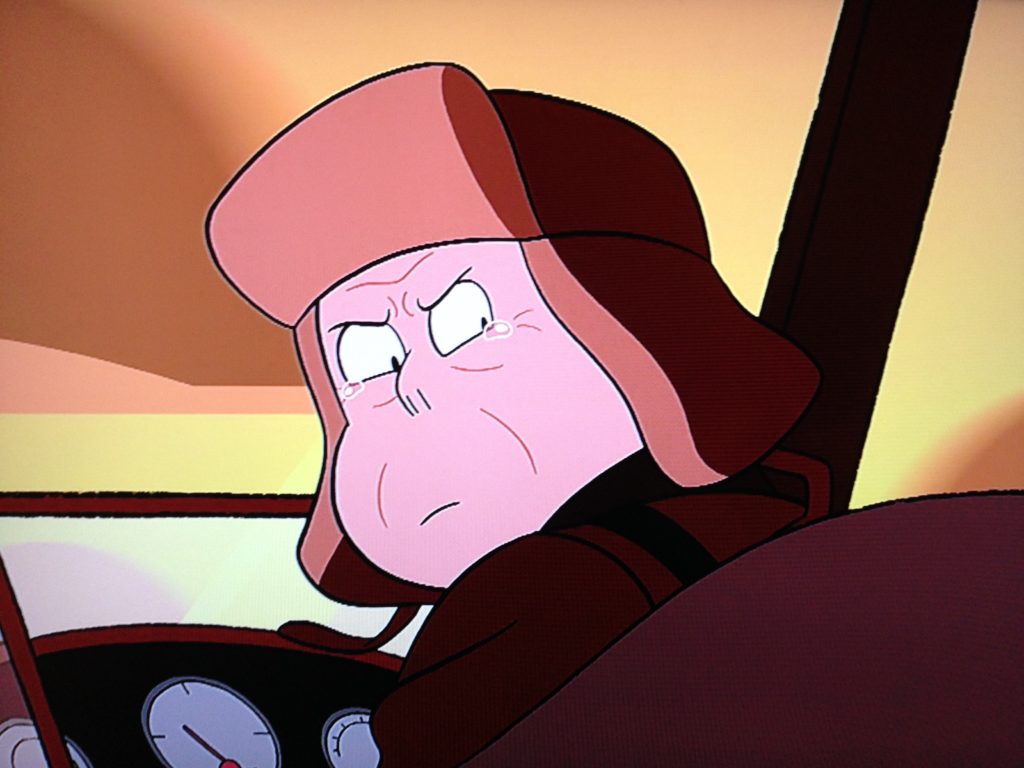 So, back to teaching a message of love aimed at angry white men. I’m going to add it to the always-growing list of reasons I love this show. If the election results have taught me anything, it’s that a lot of people haven’t felt as excited about strides in diversity as I have. They’ve felt disenfranchised and left behind. This episode acknowledges that feeling, addresses it with love and suggests that nobody needs to be left behind. Everyone can still join in. 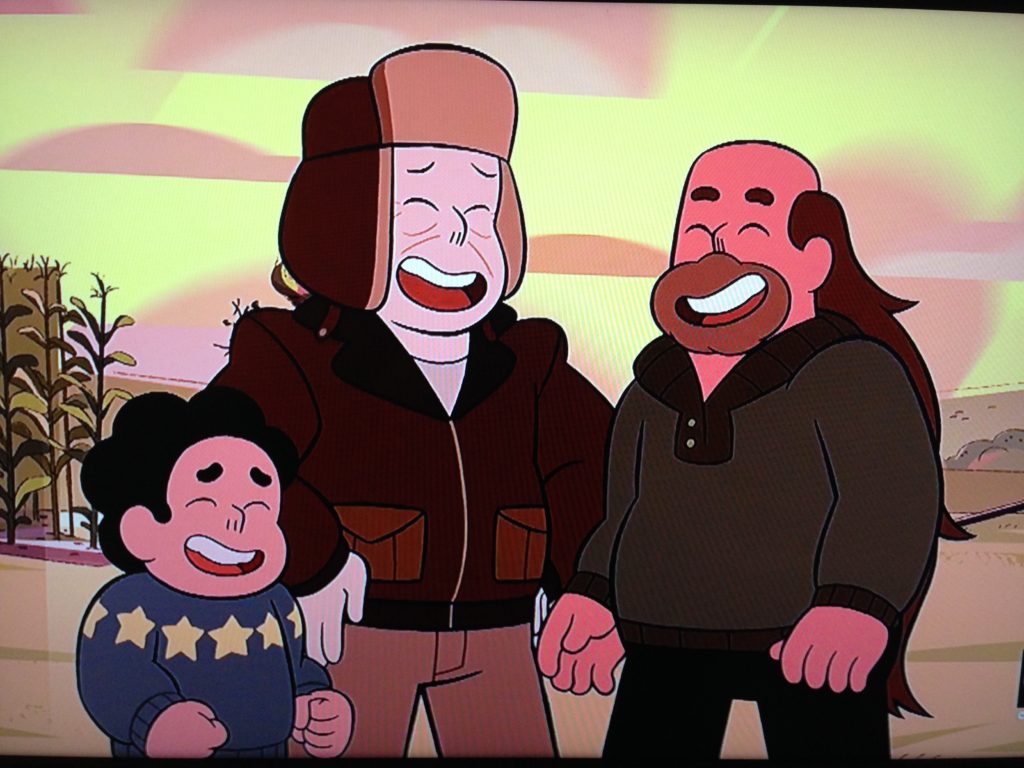 At least, that’s how I saw it.

The amazing dinner table scene also reminded me of Dar Williams‘s song “The Christians and the Pagans,” so here that is: