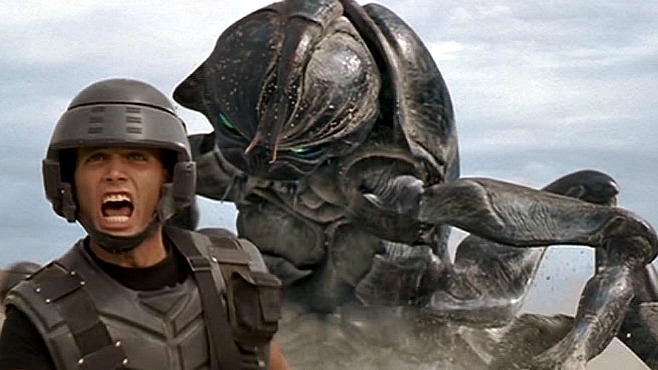 I’m no longer surprised when there is a new announcement regarding a remake, reboot, or adaptation and this announcement is a little bit reboot and a whole lot of adaptation.  Starship Troopers is getting a do-over.  But instead of remaking the 1997 film, the new movie will go back to the source material, the book by Robert A Heinlein.

Back in the ancient days of 1997, an movie adaptation staring Casper Van Dien, Denise Richards, and Neil Patrick Harris hit the theaters.  It was met with mixed reviews and reactions.  While it had very little in common with its source material, Starship Troopers developed a cult following and spawned two direct to DVD sequels.  None of them were good, but the first one was at least entertaining.

Now, Columbia Pictures is going back to the well and trying to breathe new life into the franchise.  Luckily they are not rebooting the movie, that would be terrible.  Or continuing the story where the third one left off, that would be worse. The original director, Paul Verhoeven, eschewed most of the story in the book in favor of falling back on certain themes (fascism and propaganda) and building on that.  As a result, we got a movie that had little to do with the source material.

From the sounds of it, the new writers and producers are pretending the 1997 movie, and sequels, never existed and are relying on the original work by Heinlein. Heinlein was one of the most influential authors of modern science fiction, helping give the genre legitimacy and breaking into the mainstream.  His works and ideas, along with contemporaries Isaac Asimov, Arthur C. Clarke, and Philip K Dick, influence science fiction works in both books and moving pictures.  It’s rare to point to any science fiction story where one of their influences is not felt, even to this day.

Long story short, adapting the book instead of using it as a guideline will hopefully give us a richer and more enjoyable movie.