This week’s first episode of Star Wars Rebels was really alot of fun. We see the introduction of a new bounty hunter and more light is spread on the Lothwolves that have been appearing. “Kindred” really worked to bring the idea that the stakes are getting even bigger to us as viewers and to the characters.

The episode opens with Thrawn sending a bounty hunter, Rukh, down to Lothal. I was excited to see Rukh appear because earlier this year at Star Wars Celebration Warwick Davis announced that he would be voicing the character in Star Wars Rebels. Rukh arrives on Lothal and quickly sets after the Ghost Crew. He comes across Jai, Ezra (Taylor Gray), and Zeb (Steven Blum) as they are picking up the hyperdrive from the TIE Defender that Ezra and Sabine (Tiya Sircar) stole in the previous episode. Rukh immediately sets after them, seemingly surprised by Ezra’s Force powers.

A high speed chase between the Jai, Ezra, Rukh, and some Stormtroopers occur. Meanwhile, Zeb is able to steal Governor Pryce (who is overseeing the Defender recovery) Imperial transport and get the hyperdrive back to Ryder’s base camp. As the high speed chase comes to a close, with Rukh’s speeder ultimately being destroyed, the two teens make their getaway back to camp as well all while none the wiser to the tracker that Rukh has tagged them with.

A conversation occurs between Hera and Kanan at base camp about what Hera has thought about doing once the rebellion is actually over. That ultimately leads into a followup to a conversation they had last week, with Kanan asking if Hera has ever thought about them. Once Zeb arrives back, Sabine works to get the hyperdrive into working order in Ryder’s ship so Hera can leave for Yavin IV.

And just before Hera leaves, we finally get the Kanera kiss we’ve been anticipating for 4 seasons! Kanan and Hera as a couple were always more subtly hinted at up until this season, so it’s been really nice to see just how more forward they’re being with each other in regards to their feelings for each other.

Hera and Kanan ponder over whether they were brought to Lothal for a reason.

The rest of the Ghost Crew all see the kiss and smiles are had all around for Space Mom and Dad.

As Hera makes her way off of Lothal, she has to deal with being chased by some TIEs and Star Destroyers that are posted in Lothal’s space. But as per usual, Hera is able to make the jump to lightspeed and get herself out of harm’s way before too much damage can be done.

Imperials have caught up to the Ghost crew back on the ground, prompting a need for a quick escape. Once more the white Lothwolf appears, with two black ones for companions. Ezra urges the group to follow after them, stating that they had helped him before.

RELATED: Get Your Science On in New Book THE PHYSICS OF STAR WARS

What follows is one of my favorite parts of the whole episode. The wolves lead them down into some tunnels below the myriad of mountains that they have moved into. And somehow as the wolves lead them through the tunnels, they quickly travel to the other side of Lothal. I think the best way to describe the visuals of this travel are similiar to hyperspace. The wolves guide them through a star-scattered tunnel and then they arrive to what is clearly a very ancient city, dug into the sides of some mountains. 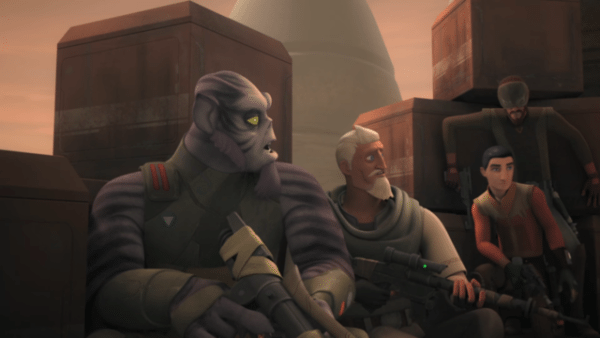 The rooms they are in contain images of what are clearly Jedi (with a little Yoda present as well!) and once more the white Lothwolf speaks, saying “Dume”. Kanan clearly recognizes this as his own birthname, that of Caleb Dume. He sense that the wolf has a deep connection to the Force, which helps to further explain just why the wolf kept appearing to Ezra.

As we’ve seen in the previous episodes for this season, many paths are starting to come together. How exactly, we still don’t really know. But with the revelation of Kanan’s name from the wolf, their arrival to the ancient city, and Hera arriving back on Yavin IV safely with the specs on the Defender, we’re sure to see just how those paths will converge soon enough.