The second episode for Star Wars Rebels to air this week was “Flight of the Defender”. Picking up just a little bit after the end “The Occupation”, we see the Ghost Crew and Ryder getting down to business regarding the TIE Defender. A trio of Lothcats joins Sabine (Tiya Sircar), Ezra (Taylor Gray), Zeb (Steven Blum) and Ryder as they do a bit of reconnaissance on an Imperial outpost.

Out at Ezra’s old tower, Kanan (Freddie Prinze Jr.) and Hera (Vanessa Marshall) are watching the TIE factory. Hera does note that she suspects the Empire will be getting ready for full-scale production of the TIE Defender soon, just by what she sees.

After collecting enough info, Zeb, Ryder, and Ezra are ready to head back and meet up with the rest of the group and to let the Rebellion know what they’ve seen. But Sabine has a better idea, deciding that they should grab the flight data recorder from the Defender itself.

The group are joined by Lothcats as they keep an eye on the TIE Defender.

Sabine and Ezra head down into the port area without too much trouble, two of the Lothcats following after them. While Sabine is inside undoing the actual piece of equipment itself, a huge, blue problem shows up. Grand Admiral Thrawn arrives on a transport to check in on the Defender, throwing quite a wrench into the impromptu mission.

Ezra is tasked with creating a distraction and in classic Ezra style, he winds up with a whole bunch of Stormtroopers on his tail. Luckily his disruption serves its purpose, allowing Sabine to steal the Defender and afford the two teens a very quick getaway. But not before they blow up a huge part of the Imperial outpost!

Zeb and Ryder head back to meet up with the rest of the crew leaving Sabine and Ezra to deal with a pack of TIEs that Thrawn sends soaring after them. Throughout the whole air battle, we see just what the Defender can do. It’s much quicker than normal TIEs, has a hyperdrive, and more guns equipped as well. While Ezra is able to bring down the TIEs that are after them, Thrawn has Governor Pryce activate a kill switch on the Defender, causing two of the wings to pop off.

Thrawn is quite satisfied with the results of the unplanned flight test, deducing that if a sloppy pilot like Ezra can take out TIEs, the Defender is quite a worthy ship.

With one wing left, Ezra manages to land the Defender before the two crash into something. Sabine works the hyperdrive free and the two set off across the plains of Lothal with hyperdrive and data recorder in hand. Back with the Ghost crew, we find out that contacting the two teens would only draw in Imperial forces. Which is definitely something they don’t want to risk.

Ezra winds up following a white Lothcat to a small alcove once night has fallen, where he and Sabine proceed to hide the hyperdrive. Sabine herself didn’t see the Lothcat but she does trust Ezra, so they leave the drive behind and head out once more.

Imperial ships are sent out to search the area around the crash site to find the two teens, sending them running across the plains in an effort to hide. One really cool moment occurs, where Ezra and Sabine ride on the back of a white Lothwolf, though Sabine mysteriously fainted just before it showed up.

Ezra has always had a deep connection to animals throughout Rebels, and to further see this connection explored has me excited. Dave Filoni, creator and director of Rebels has been hinting at the Lothwolf and Lothcat for quite some time so we know for sure that these two animals will be important throughout this season. 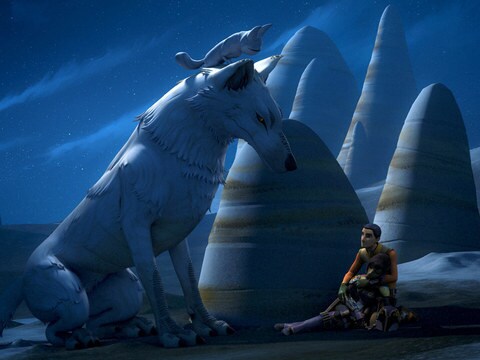 Sabine and Ezra are approached by the Lothwolf.

The Lothwolf does bring Ezra and Sabine back to Ryder’s camp, growling out “Doom” just before it disappears and the Ghost crew runs out to greet the teens. Sabine doesn’t remember the wolf at all, but Kanan believes Ezra once they are left alone. Kanan comments that he thinks all the paths are coming together now and that he isn’t quite sure what it means just yet.

This episode was fun and fast paced. Stealing the Defender to find out more about it was an important step for the Ghost crew and the appearance of the Lothwolf really has me wondering about Ezra and Kanan’s fate as the series continues on.

Just what will happen to the Ghost crew as we draw closer to the events of Rogue One and A New Hope?