And we are back with yet another 2-parter for Star Wars Rebels this week with Part 1 and 2 of “In the Name of the Rebellion”. As should be expected, there will be spoilers ahead as we finally get the Ghost crew back together!

We open Part 1 with Kanan (Freddie Prinze Jr.), Ezra (Taylor Gray), and Sabine (Tiya Sircar) flying into Yavin 4, a more than familiar sight for Star Wars fans. Once they’ve landed, a quick series of events happens. It turns out that Hera (Vanessa Marshall) was away on a quick mission herself. Unfortunately her return is much quicker than anyone would want as she and her squadron return to Yavin 4 in damaged ships, calling for an emergency landing.

As is expected though, Hera manages to pull off the landing in typical Syndulla style, keeping herself safe. A nice reunion is had between the Ghost Crew, including Zeb (Steven Blum), who was still on Yavin 4 while everyone was off on their respective missions. Soon enough we learn what the main plot point of Part 1 will be.

The Empire has built a new communications relay out in the Jalindi system. A meeting is called with the Ghost Crew, Mon Mothma, Senator Bail Organa, and Kallus. 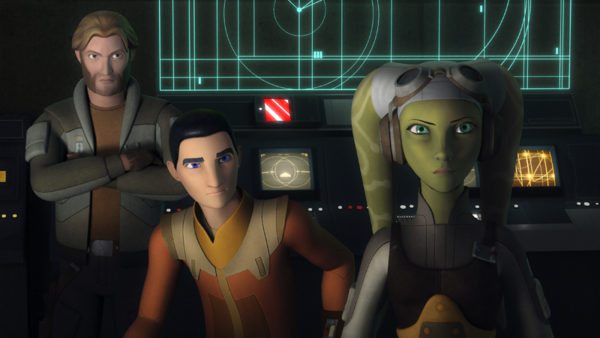 Mon Mothma makes it very clear during the meeting that she wants the Ghost crew to take out the relay without completely destroying it. Hera and Ezra both struggle with this, as Hera recently lost some of her pilots in her latest mission and Ezra is itching to get back to Lothal to help his home planet. It’s unfortunate but Mon Mothma raises the question of whether helping one or two planets at the present time outweighs trying to set free thousands of planets.

Ezra struggles with this, later on asking Kanan if they’re choosing the right way to fight. The moment between Kanan and Ezra (before Saw Gerrera shows up with his quite dramatic holoprojection) makes me wonder for the rest of the season. I’ve been missing the moments between the two where they’re able to talk with each other, so the short moment was nice to see. Kanan wasn’t able to reply to Ezra but it’s not clear if he agrees or disagrees.

RELATED: Sci-Fi Authors Share What STAR WARS Means to Them in A LONG TIME AGO

Once the mission is underway, all manner of things that could go wrong do go wrong. Though that is par for the course in Rebels. Sabine, Ezra, and Chopper make it onto the relay just fine. But an Imperial ship arrives, Chopper accidentally gets into the relay’s communications system instead, and the relay is shifted. Sabine and Ezra are spotted and a fire fight quickly ensues.

Hera, Kanan, and Zeb (all aboard the Ghost) are forced to take cover from TIE fighters in the thick fog below the relay as Saw and a pilot arrive in the midst of the fighting. Though perhaps the coolest thing happening in this series of events is Kanan’s navigation in the thick fog. Hera’s unable to see but we can see the trust between the two of them as Hera puts her ship essentially in Kanan’s hands.

Saw winds up saving Ezra and Sabine from the relay, since all three set to work to blow it up. Going against mission orders has always been a running theme in Rebels and Saw’s arrival only helps to push Ezra and Sabine’s change to the mission forward. Once the Ghost catches up with Saw’s ship, Part 1 starts to draw to a close.

Hera comms into the ship and asks for Saw to pull along side the Ghost so she can retrieve her crew mates safely. But a Star Destroyer comes out of hyperspace causing Saw to take off with the two teens and the rest of the Ghost crew is left to their own devices.

The end of Part 1 left me glad that Part 2 was following immediately after!

Part 2 opens with Saw’s U-wing still traveling through hyperspace. He goes through a quick run through of some mysterious cargo that he’s caught word of. Mysterious Imperial cargo of course.

And Saw proceeds to rope Ezra and Sabine into helping him track down this cargo by spinning it as a chance to really do something, instead of running Mon Mothma’s errands. The two teens are plenty game to be more proactive than they have been recently.

Saw Gerrera, Sabine, and Ezra going after the cargo.

They proceed to sneak onto the freighter that is carrying the cargo. Ezra hears something akin to singing and this is where I got excited and immediately knew that kyber crystals would be on board the ship. Digging around the cargo on the ship, they discover construction materials, though the mysterious cargo doesn’t seem to be anywhere in th main hold.

Some highlights from the next part of the episode include:

From there, the group moves in to take out the Death Troopers. With some smoke bombs and a little light play with Ezra’s light saber, the squad is taken out pretty quickly. And as expected, the cargo is a huge, unstable kyber crystal.

The group finally finds out what the cargo on board is.

Now we all know what the kyber crystal and construction materials are for, but our heroes certainly don’t. Though Saw’s suspicions that the Empire is building a superweapon of some kind of right on point. And those suspicions lead to him sending the teens to finish the sabotage job of the engine room while he supposedly deals with crystal.

Unfortunately, this was a mistake. Ezra and Sabine are knocked out by Saw and eventually come to to find him extremely paranoid. With the crystal in the engine room. The freighter finally drops out of hyperspace and reveals that there is no superweapon, just a Star Destroyer. This leaves Saw with no other reason to stay on board the freighter, and he moves to escape with his U-wing that has followed them through hyperspace.

Sabine and Ezra wind up dealing with the crystal and having to grab the prisoners and Chopper to make their escape. They make it aboard the Imperial shuttle from earlier and Sabine pilots them off of the ship. She makes a smart call to put the Star Destroyer between them and the freighter that is about to blow.

Luckily for them, the Destroyer takes most of the damage and the shuttle winds up only losing power to all systems. And as far as perfect timing goes, the Ghost pulls out of hyperspace to pick the teens and prisoners up just in time.

Sabine and Ezra tell Kanan about the crystal, prompting Ezra to wonder if the Rebellion is about to be hit with a war that they didn’t even know was happening.

And with that Part 2 of “In the Name of the Rebellion” comes to an end. Both parts had me excited. A lot of things happened that moved both characters and plot along. We had some great moments between the Ghost Crew and we witnessed Saw moving closer to where he’ll be on Jedha in Rogue One.

The shift in between Part 1 and 2 did throw me a little bit, as I wasn’t expecting Sabine and Ezra to be so separated from the Ghost crew. But overall the episodes did what they were supposed to. The Rebellion is growing and so is the Empire. And the Ghost crew is going to have to figure out where they fall in the mix.