Home » Stuff We Like » Stan Lee’s LACC 2017: The Cast of SABRINA THE TEENAGE WITCH Reunites for a Magical Panel

Stan Lee’s LACC 2017: The Cast of SABRINA THE TEENAGE WITCH Reunites for a Magical Panel

If you’re a ’90s kid like me, chances are you grew up watching Sabrina the Teenage Witch. We laughed with her. Cried with her. We felt a slight twinge of jealousy at the mere thought of her budding relationship with Harvey. Marveled her growing aptitude for magic. Wished we had two cool aunts like Hilda and Zelda. Longed for a sarcastic talking cat like Salem. Essentially, we lived vicariously through Sabrina Spellman. Alright, I’ll stop lumping us together as if we’re one and the same. Those aforementioned thoughts are most certainly mine.

Now, I’ve been itching to get back to the Other Realm since 2003. Fourteen years have passed since our beloved, magical sitcom permanently closed the curtain. Thankfully, Stan Lee saw the need to reunite our favorite cast for an exclusive panel at Stan Lee’s LACC 2017. Fret no more, my magical acolytes!

So, we were finally granted the Sabrina the Teenage Witch reunion we deserved. Who was in attendance, you may ask? Well, there was series star Melissa Joan Hart. Caroline Rhea (Hilda) and Beth Broderick (Zelda). Nick Bakay who provided the voice of Salem, the former warlock who attempted world domination and is now sentenced to feline form. Nate Richert, who portrayed the lovable Harvey. Soleil Moon Frye (Roxie) and Elisa Donovan (Morgan), Sabrina’s college roommates. David Lascher, who stole our hearts as Josh, the latte guy. Lastly, but certainly not least, Alimi Ballard, who portrayed the eccentric Quizmaster. They all gathered on the Main Stage of LACC on Saturday morning, October 28th.

Now, the panel opened with a question aimed at Hart. Where is the strangest place she has seen Sabrina “in the wild?” “Well, I understand that I speak 142 different languages,” Hart quipped. She goes on to describe the international fame Sabrina the Teenage Witch has achieved. Hart also mentioned that the show didn’t hit the international airwaves until after the series concluded its US run. For example, Hart was married in Italy shortly after Sabrina the Teenage Witch ended. No one was familiar with the sitcom at the time. That is, until she returned to Italy two years later for an anniversary trip. Apparently, said sitcom took the nation by storm. 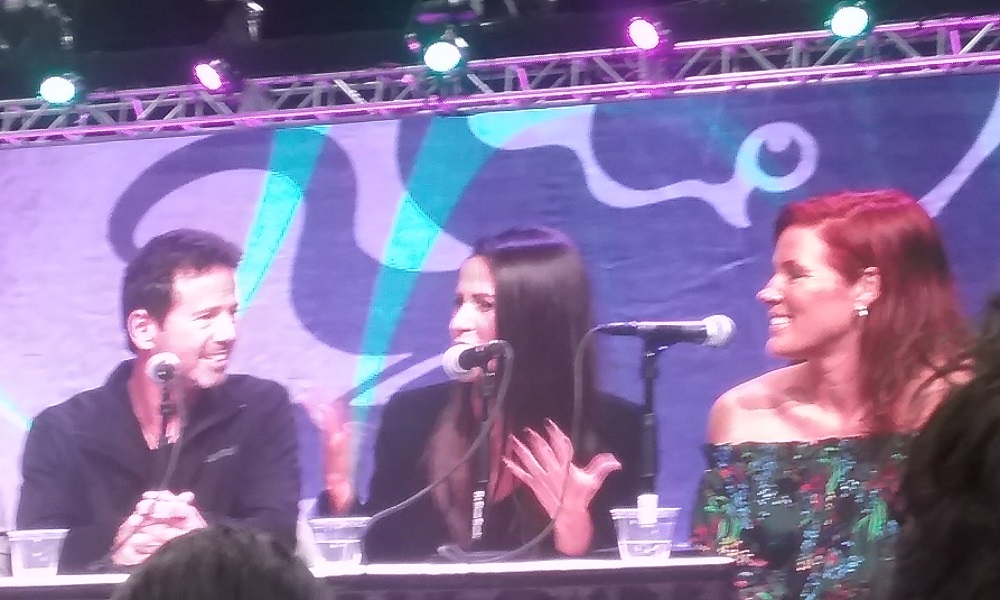 Next, they discussed how Sabrina the Teenage Witch came to fruition. Hart’s mother, Paula, found the beloved Archie comics strip and molded it into a TV movie. Then, she pitched the series to four different networks. By the end of the day, Paula had three offers. However, ABC already proposed a time slot for the series, that being the coveted TGI Fridays. Ah, remember those days?

Then, the moderator pitched a question to our Harvey. Richert dealt with his fair share of mania once the show became a success. He told a story of how he was essentially mobbed by a horde of adolescent girls while shopping at a mall with his girlfriend. Richert made sure to wait at least two years before setting foot in another mall. Good choice. Donovan also mentioned that, at the height of Sabrina the Teenage Witch, it was difficult to cruise undetected in public places. Frye was over the moon (get it?) at getting to join the cast. She was given the opportunity to work with one of her best friends, for starters. Frye elaborated on how timeless the show is, and how welcoming her new TV family was.

Next, we learned a fun tidbit about Bakay – he’s a writer. His current gig? Writing for the Anna Faris and Allison Janney led sitcom Mom. He also wrote a handful of episodes for Sabrina the Teenage Witch. Bakay was then asked about his day to day life on set. Since he was portraying a talking cat, did he have to physically appear on set alongside the remainder of the cast? Well, the answer to that is yes. Bakay would stand on set with a microphone delivering Salem’s lines. He recalled a crew member placing a fish tank over his head to achieve an echo-like sound. Initially, they used a puppet to act as Salem. As the show progressed, however, they graduated to an authentic, full-fledged cat.

Then, Rhea threw in an anecdote of her own into the mix. Apparently, she struggled with having Bakay on set at times. The cast was always urged to look at the puppet of Salem when Bakay would deliver his lines. However, Rhea would find herself turning to laugh at Bakay himself. Well, he did have a certain dry wit that just worked. Rhea’s inability to “look at the puppet” was apparently well known, as the rest of the cast lovingly chided her for it. When asked where said puppet is now, Rhea made a joke that caused the audience to burst into laughter. “I’m wearing it,” she teased.

Next, the cast reminisced on what it was like working with an actual cat. Hart joked that the cat always memorized his lines and was always on his mark. Then, Hart revealed a story about the final cat used for Salem. His name was actually Salem (points for Gryffindor) and he was in a Halloween themed episode of Melissa and Joey. Broderick even guest starred in said episode alongside the now ancient cat. I may or may not need to start watching Melissa and Joey.

Then, the cast was asked where they think their characters are presently. Donovan believed Morgan would be “driving some rich man crazy” and continuing to “stalk Josh on the side.” She would also continue to dole out fashion advice for Sabrina. Frye theorized that Roxie started a punk rock band and moved to NYC. Possibly had a slew of kids. Sounds plausible. Lascher believed Josh was still stalking Sabrina while being stalked by Morgan himself. That’s a whole lot of stalk. He would also be a successful photographer, considering that was his passion on the series.

Next, Ballard quipped that the Quizmaster would be a “nanny teacher.” He would bestow his magical wisdom upon “magic kids” while living the high life in Miami. When he’s not teaching the young and impressionable, he’s surfing. Richert suspected that Harvey would have a sixteen year old with Sabrina and is subsequently banished as a result. Broderick quipped that Zelda would be “driving an Uber in the Other Realm.” Rhea proposed that Hilda would be living alone with Salem. Hey, Salem’s not bad company. Well…he’s company, at least. 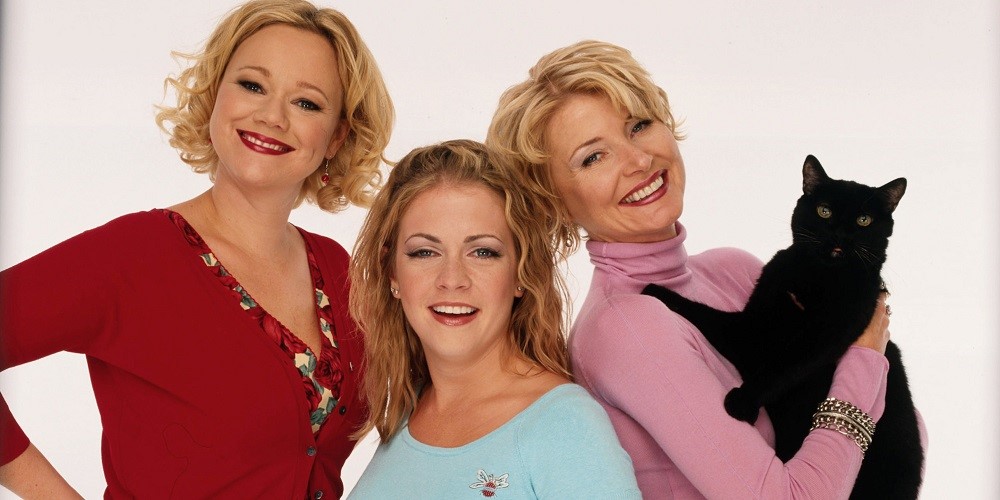 Salem, you haven’t aged a day.

Bakay joked that Salem would be living with Hilda, still consigned to being a cat. Always attempting world domination. Oh, and he’s really grown fond of Sudoku. Salem is also really into role playing and frequently attends conventions. “He’s probably out there right now,” Bakay teased, gesturing to the crowd. Lastly, Hart mused that Sabrina would be happily married to Harvey. Our lovebirds would craft their own magic school a la Hogwarts. Married headmasters of magic? I can get behind that.

Then, the moderator asked for Hart’s opinion on the newest series in the Sabrina franchise, The Chilling Adventures of Sabrina. “It sounds like the new one is going to be more about witchcraft, dark stuff. I think it sounds more like Buffy the Vampire Slayer than Sabrina. I think it will appeal to a different kind of audience and be a totally different show,” Hart explained.

Next, the moderator posed a question to the cast about whether they believed Sabrina the Teenage Witch was slightly ahead of its time. Yes, this was a show about powerful women doing magic. Hart mentioned shows like Bewitched and I Dream of Jeannie having that element of magic. Said element is timeless in and of itself. “You guys are here because you believe in magic, right?” Hart asked the audience. I know I do.

Then, our favorite cast reminisced on the various guest stars they had the pleasure of working with. Bryan Cranston, for one. Britney Spears. N’Sync, the boy band to end all boy bands. ’90s trio sensation Hanson. You know, to name a few. Lastly, the cast once again commented on the timelessness of Sabrina the Teenage Witch. They enjoy passing on the legacy to their children. Rhea revealed that they have 15 children between the entirety of the cast. That’s a whole lot of kid.

Hart closed the panel by thanking fans for continuing to support the series long after its conclusion. She mentioned the long hours they contributed to its conception, but in spite of that they “had a blast.” Sabrina the Teenage Witch created a family between cast and crew alike.

Thank you, LACC, for blessing us with the glorious reunion content we craved. Now, if you’ll excuse me, I have a date in the Other Realm.

Sabrina the Teenage Witch is now streaming on Hulu.