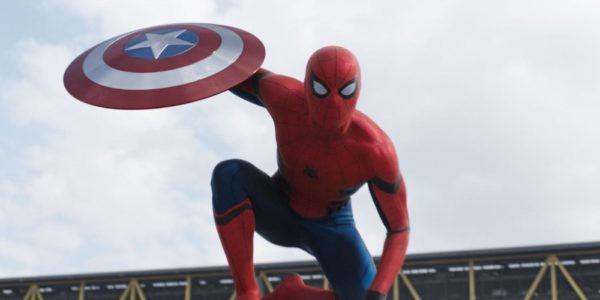 With Doctor Strange now in the rearview mirror, the Marvel Cinematic Universe is full steam ahead on two of their most popular franchises — Guardians of the Galaxy and Spider-Man. This, of course, means that we’ll be getting all sorts of publicity for both of these properties and it’s already starting. We’ve got the teaser for Guardians of the Galaxy which was out a month ago, and now, today, thanks to CCXP — Brazil’s very own Comic Con — we’ve got a description for some exclusive Spider-Man: Homecoming footage!

Among those in attendance was Marvel’s very own Agent M, Ryan Penagos, who tweeted out a description of the footage he saw. We’ve got his tweets embedded below.

There’s a case from Tony Stark with an “upgrade” for Spidey. Then we see Spidey leap off a building, open his arms, web wings! #ccxp2016 2/?

There were a few more flashes of shots, but I can’t remember. That classic underarm webbing look was just so rad. #ccxp2016 3/?

This Spider-Man Homecoming slide was how the panel ended. Fun! #ccxp2016 4/4 pic.twitter.com/wUYlXUGLxV

So, to recap, Happy Hogan (Jon Favreau) visits Spider-Man, gives him a case and then see him leap off a building with — ba ba ba bum — web wings!

This recalls the classic look of the original Steve Ditko art. We knew that we’d see Iron Man Tony Stark (Robert Downey, Jr.) at some point and we heard rumors that Spider-Man would have webbing under his arms, and now we’ve seen both.

Well, we didn’t see it, only the people in Brazil did, but the collective “Nerd-We” has seen it!