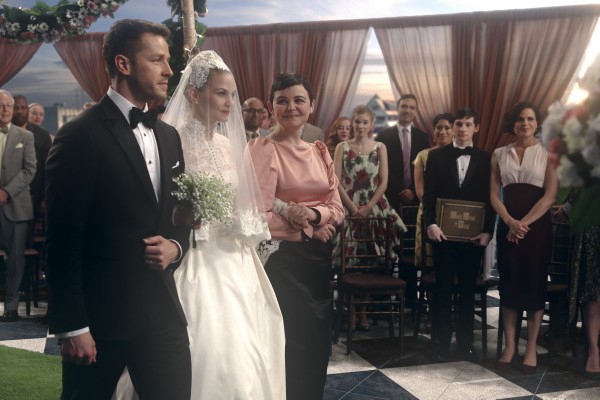 Once Upon A Time, The Song In Your Heart, abc.com

It’s the event we’ve all be waiting for Oncers! The Emma Swan and Killian Hook WEDDING! Even better..iIt’s a musical episode!!

So last time, Rumpelstiltskin told everyone that he defeated the Black Fairy.  Snow announced that they would be having Emma and Hook’s wedding the next day!  Hook asked Henry to be his best man.  So it appears that Emma will have her happy ending after all.  Well, it appears that way to the town of Storybrooke.

We know that the Black Fairy is still alive and in Storybrooke.  She is preparing to kill Emma…on Emma’s wedding day!

Check out the recap for previous episode of Once Upon a Time, “The Black Fairy”

Here’s what we know:

“In flashback, Snow and Charming make a special wish that Emma will be protected. The result of their wish has the whole kingdom bursting into song which infuriates the Evil Queen. Meanwhile in Storybrooke, the Black Fairy announces her plans to unleash another curse on the town while Emma and Hook prepare for their wedding.” – abc.com

Check out the trailer for the special musical episode of Once Upon a Time, .The Song in Your Heart.”

New column incoming! "Horror With a Side of Cheese" will dive into cheesy horror movies that should be on your radar. Read about our first pick, Attack of the Killer Donuts! #HorrorMovies #HorrorFam
https://www.geekgirlauthority.com/attack-of-the-killer-donuts-horror-scott-wheeler/