South Coast Repertory’s “THE SIEGEL” is Worth Seeing Twice 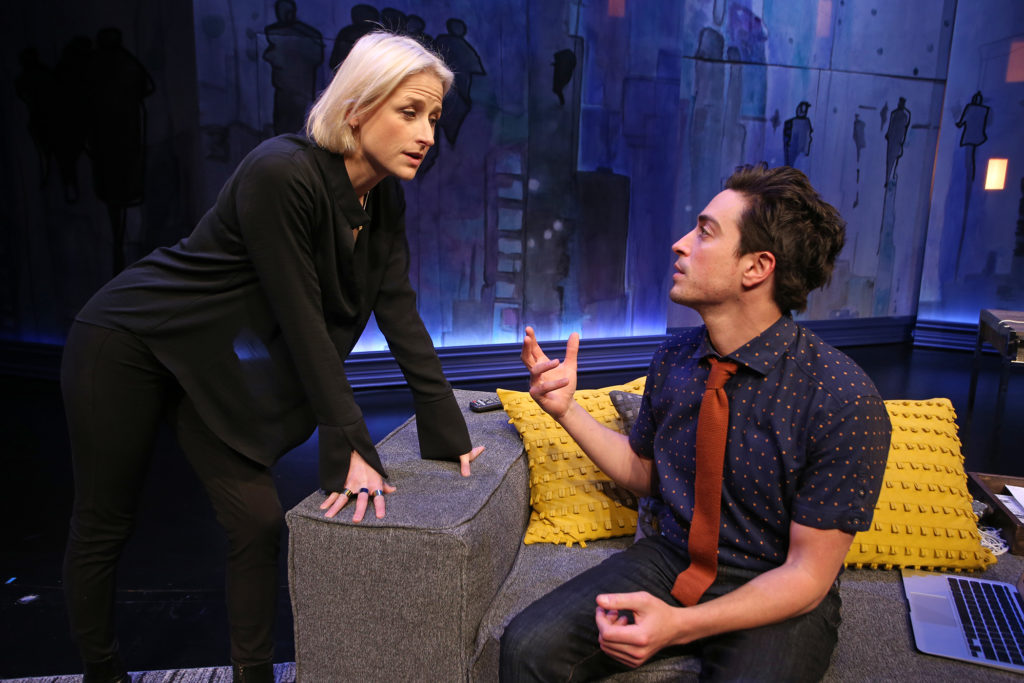 Although the homonym quality of Michael Mitnick‘s new play’s title evokes Chekhov’s The Seagull, and although the program includes a thoughtful article by Jerry Patch that references the Chekhov play, I don’t think the average audience member will walk out of The Siegel feeling like they just spent 80 minutes laughing at the “futile pursuit of romantic happiness.” Maybe that’s what we were all doing, as my sister and I laughed along with the rest of the audience through the entire single-act play, but it didn’t feel like it.

When I was digesting the show after getting home, I considered the performances. Ben Feldman and Mamie Gummer are extremely recognizable people (to me), and I feel like Amy Aquino might be in everything I’ve ever seen on TV. The other cast members were less familiar, but as a whole I don’t think I’d say: “Woah! That actor just pushed some major boundaries to deliver that performance.” That isn’t because the performances weren’t top-notch– they were– but it’s because the casting was really well done, and instead of feeling conscious of someone stretching their artistic muscles in front of me, I just relaxed into suspending my disbelief. In a nutshell, the show is funny and honest. 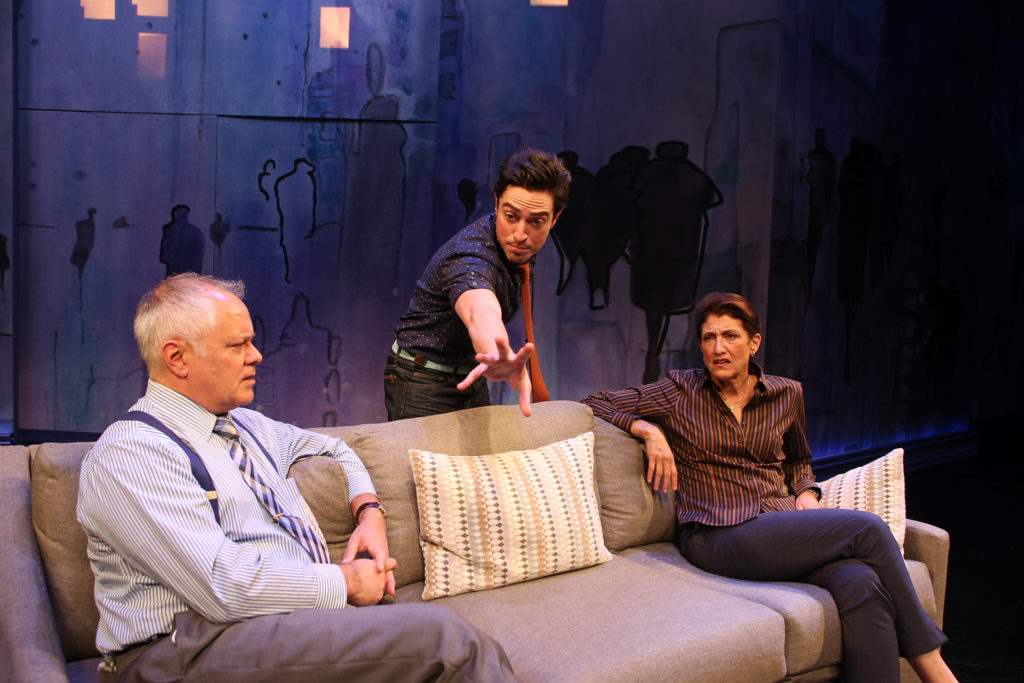 I am hesitant to share more about the plot than what you’ll find on SCR’s website – “The story follows Ethan Siegel (Feldman), who’s in love. Tonight he’s going to ask Alice’s parents for permission to marry her. Timing is everything, though, and Alice (Gummer) is reeling from working on a lost election—not to mention they broke up two years ago and she’s seeing someone else. But Ethan is undaunted. His journey makes for an irresistible comedy about modern love, uncertain times and the need to go back in order to move forward.”

This blurb accurately sums up what *happens* in the show, but what it doesn’t convey is what kind of comedy you’re in for. It’s all word play and repartee, which is, for the most part, extremely well done. The script opens with a short passage from The Philadelphia Story, and I think you can definitely see the influence of that classic and its peers here. The play unfolds in scenes mixing and matching the characters into different small groups, and the comedy is in the conversations. It’s so light at times that you might worry it won’t be able to land in a satisfying way, but I really thought it did.

Gummer and Feldman were appropriately engaging in their roles– both with enough likability to draw you in but enough edge to keep them interesting. Amy Aquino and Matthew Arkin, as Gummer’s character, Alice’s, parents, both had some terrific moments. Arkin was wonderful, and I think Aquino got most of the best lines in the show– or maybe she just had such a zingy delivery that it felt that way. Dominique Worsley successfully walked a tightrope through the whole show in his role as Alice’s current boyfriend. He sets you up to feel OK about his fate, whether he wins or loses Alice. 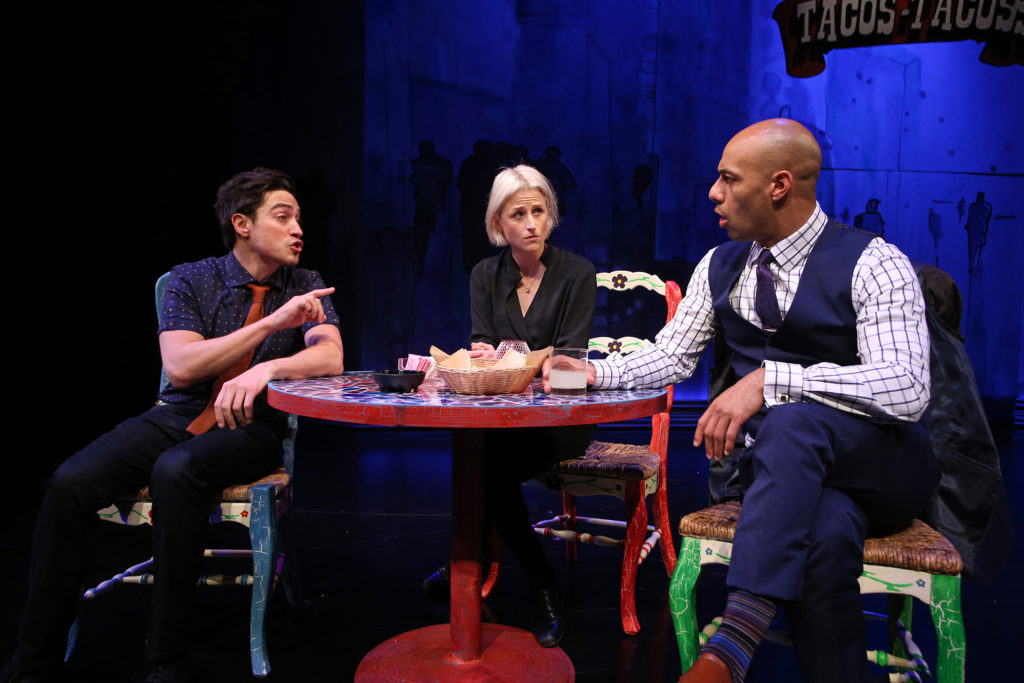 If you’re close enough to get to Orange County for this show before it closes, I’d definitely recommend it. If you’re a fan of Mad Men, Being Human, wordplay and seeing new theatre before anyone else in the country gets to, make the effort to see these people in this production. Also, special props to scenic designer Michael B. Raiford for a super-cool revolving set with evocative, minimalist elements. And, because there’s a twist at the end (which I feel unsure I should even have told you!), I’d welcome the chance to see it again and find out what it’s like if you know where it’s going.

Bonus for getting to this production: celebrity actors have celebrity friends and family! I didn’t wind up seeing Meryl Streep or Elisabeth Moss, but I did see Fred Willard in the crowd, and that was very cool!

The Siegel, which is making its world premiere on South Coast Repertory Theatre’s Segerstrom Stage, runs until April 23.