Someone Made a Book Accurate Miniature of the Iron Throne 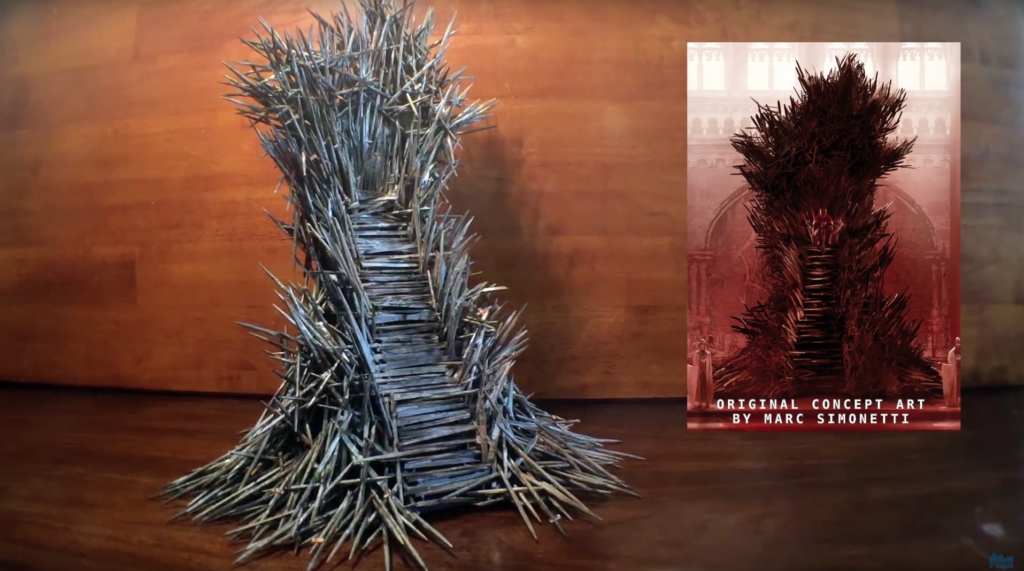 The breath of the greatest dragon forged the Iron Throne…the swords of the vanquished, a thousand of them, melted together like so many candles…
-Viserys Targaryen

The Iron Throne is the most iconic image of A Song of Ice and Fire Universe, be it the written word or the Game of Thrones television show.  We all know creative licenses must be taken in any work where the story jumps from pages to film.  Budgetary restraints, location restraints, technology not quite up to the task, networks and studios butting in where they don’t belong, the list is endless.  But, one of the biggest cosmetic changes when Game of Thrones jumped from book to screen was the look of the Iron Throne.

Just to remind everyone what the HBO version of the Iron Throne looks like. 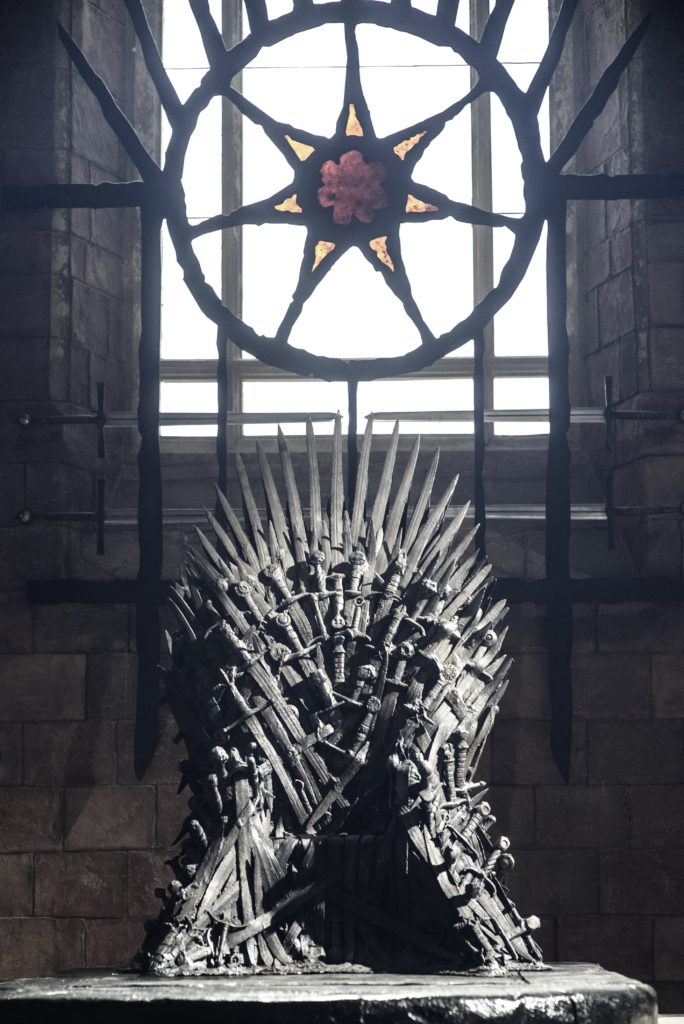 Then, for those that have not read the book and may not understand the twisted beast the Iron Throne really is, from GRRM’s Live Journal:

Then came the show, and HBO’s version of the Iron Throne.

I’m a realist about these things, and I know perfectly well that for millions of television viewers worldwide, the HBO Iron Throne is THE Iron Throne, and always will be. It turns up everywhere, on book covers, on magazines, in places that have no connection to the show. Say “GAME OF THRONES,” and people think of the HBO Iron Throne.

And, hell, in some ways the HBO throne is more real than mine could ever be. They’ve actually MADE theirs (though it is not actually made of iron). There’s the one that sits on the set in Belfast’s Paint Hall, and at least six others that travel about the country making promotional appearances at conventions, screenings, exhibits, and the like. They turn up in train stations and parks. Thousands of people have had their pictures taken sitting on the Iron Throne, including many celebrities. And me as well, many times. Over in the UK, Sky Atlantic has their own Iron Throne, that also travels about to help promote the show. Canal + has one too, in Spain. The Spanish and British thrones are variants, somewhat different from the HBO throne, yet similar in most important respects. I’ve been seated on both of those at well.

The HBO throne has become iconic. And well it might. It’s a terrific design, and it has served the show very well. There are replicas and paperweights of it in three different sizes. Everyone knows it. I love it. I have all those replicas right here, sitting on my shelves.

And yet, and yet… it’s still not right. It’s not the Iron Throne I see when I’m working on THE WINDS OF WINTER. It’s not the Iron Throne I want my readers to see. The way the throne is described in the books… HUGE, hulking, black and twisted, with the steep iron stairs in front, the high seat from which the king looks DOWN on everyone in the court… my throne is a hunched beast looming over the throne room, ugly and assymetric…

The HBO throne is none of those things. It’s big, yes, but not nearly as big as the one described in the novels. And for good reason. We have a huge throne room set in Belfast, but not nearly huge enough to hold the Iron Throne as I painted it. For that we’d need something much bigger, more like the interior of St. Paul’s Cathedral or Westminster Abbey, and no set has that much room. The Book Version of the Iron Throne would not even fit through the doors of the Paint Hall.

So what does the Real Iron Throne look like, you ask? Glad you asked. It looks kind of like this: 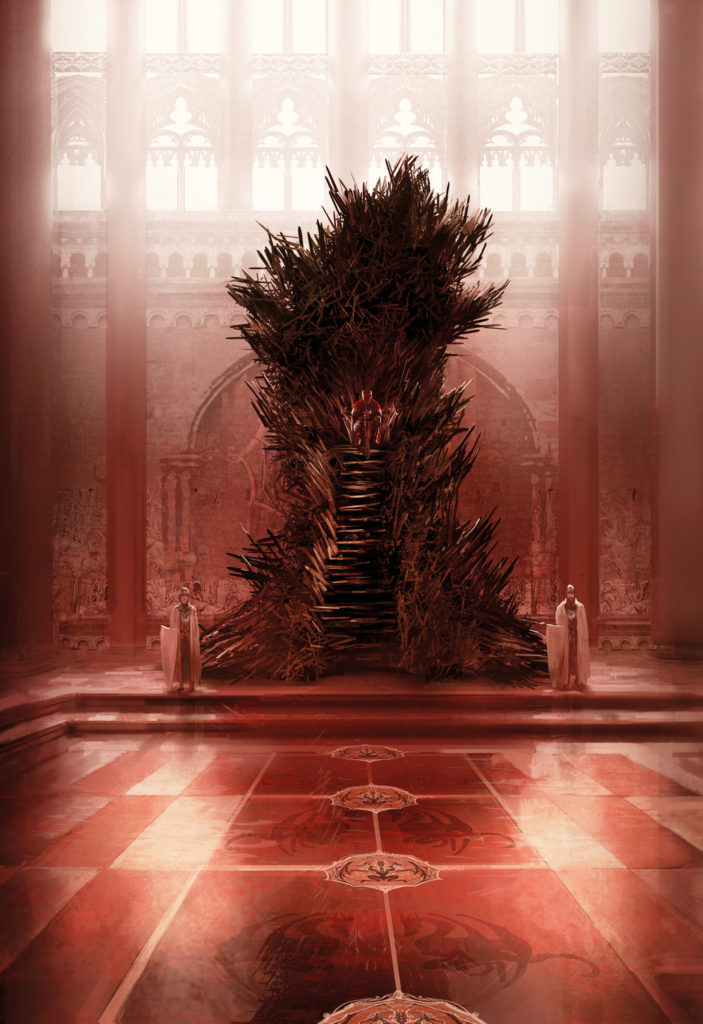 That’s the Iron Throne as painted by the amazing Marc Simonetti (and if you haven’t gotten his 2013 Ice & Fire calendar, better hurry, the year’s half over) for the upcoming concordance, THE WORLD OF ICE & FIRE. It’s a rough, not a final version, so what you see in the book will be more polished. But Marc has come closer here to capturing the Iron Throne as I picture it than any other artist to tackle it. From now on, THIS will be the reference I give to every other artist tackling a throne room scene. This Iron Throne is massive. Ugly. Assymetric. It’s a throne made by blacksmiths hammering together half-melted, broken, twisted swords, wrenched from the hands of dead men or yielded up by defeated foes… a symbol of conquest… it has the steps I describe, and the height. From on top, the king dominates the throne room. And there are thousands of swords in it, not just a few.

This Iron Throne is scary. And not at all a comfortable seat, just as Aegon intended.

The difference is quite obvious when the two images are compared.  The original Iron Throne is certainly not meant to comfortable, or dainty.  It’s forged out of weapons of vanquished enemies, forged by dragon fire and blacksmiths, it’s not meant to be beautiful.  It’s a statement of power, meant to fill the viewer with awe and fear.

If I had to choose I would 100% sit on the HBO version than the GRRM approved version.  However, if I were a ruler, I would 100% choose the painful, ouchy one and figure out a way to lounge on it like a boss without doing serious bodily harm.  There’s also every chance I would choose to wear a lot of red or black, to hide the blood that’s inevitable from all the pointy things.

Well, D. Schuyler Burks of Sky Make Things decided to make a miniature of the GRRM approved Iron Throne and the results are quite spectacular.  Like the TV show, this Iron Throne is not made out of iron, instead it’s made from wood, toothpicks, glue, and paint.  But it does a fantastic job capturing the hulking monstrosity in teeny, tiny form, he even used miniatures in an attempt to get an accurate size ratio.

For a time lapse of the entire process watch the video below.

Have you ever seen the Iron Throne? The barbs along the back, the ribbons of twisted steel, the jagged ends of swords and knives all tangled up and melted? It is not a comfortable seat, ser. Aerys cut himself so often men took to calling him King Scab, and Maegor the Cruel was murdered in that chair. By that chair, to hear some tell it. It is not a seat where a man can rest at ease. Ofttimes I wonder why my brothers wanted it so desperately.
-Stannis Baratheon