Home » Movies » Reviews » So You Want to Improve Oscar Night…

So You Want to Improve Oscar Night…

This is a refrain heard every year, it seems, just after The Academy Awards broadcast. People sharpen their swords to slice through everything that was wrong with that year’s ceremony: the host was charmless, the host was tooooo charming (in a weird sort of way); the show ran long, the musical numbers were crass (or perhaps not crass enough); the whole thing was too stodgy; the camera kept cutting away to the same stars in the audience all the time; the gowns were ugly blah blah blah. On and on it goes, it never really changes. You want to enjoy the Oscars more? You want to see some real improvement? Here are my top three suggestions – two for the Oscar committee itself, and the first for the general public who watches them.

1. Accept Oscar for what it is

Look. Let’s be clear on something right up front. The Oscars are an industry awards night. It is an evening of people’s names being read off, envelopes being opened, and speeches being made. There’s only so much interesting that’s *EVER* going to be! The telecast essentially allows viewers to be a fly on the wall as an entire industry congratulates itself. You can’t rightly compare the enertainment value of such an experience to another TV show or movie; the correct frame of reference is this: Am I enjoying this more than I would being at an Amway convention? Would attendance at annual recognition nights for the Kiwanis, or the Rotary Club, or perhaps the Independent Auto-Dealers of America, be more scintillating to you? Just because the people being honored are entertainers, it doesn’t naturally follow that entertainment is the prime order of the night. If you want that, there’s a kajillion other stations at your disposal, on the same evening. All of which is to say: instead of focusing on all the places where The Academy Awards AREN’T interesting or fun, accept lack of fun and interest as a given, and learn to appreciate the places and moments where the evening deviates from that pattern.

With that said, allow me to make two modest proposals to The Academy itself. 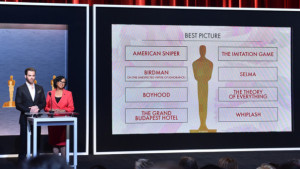 I’m sorry, but this ten films for Best Picture crap has got to go. Audiences just can’t have rooting interest when a field is that big. Every category should have five, and only five, nominees. Good round number to deal with. Which also means, if you cannot scrape TOGETHER at least five nominees for a category in a given year (I’m looking at you Best Makeup, and some years Best Animated Film) then that either should not be a category that year, or else the award should just be GIVEN to someone without the need for a televised runoff. Also, I’m a strong proponent of doing what The Golden Globes do: splitting Best Picture – along with Best Actor and Actress – into separate categories for Drama and Comedy. Having comedies – as well as comedic performers – get their full due come Oscar time is highly appropriate, since no matter how you analyze it, the art of comedy and that of drama are fundamentally different, and deserve honoring in different ways. Now, adding even MORE categories to the evening may seem counterintuitive as a way to fix things, but consider this: if you open the winner’s circle to a bunch of funny people every year, you increase the likelihood of more entertaining and irreverent moments. If nothing else, their speeches would likely be better. Which gets me to my final point …

There’s no getting around this fact: the Oscar acceptance speeches are the heart of the evening. Do whatever you want with the musical numbers and tributes, vie for the most excellent host you can, you’re still left with the fact that the greatest time spent during any broadcast is going to be the reading of names and the making of speeches. This, therefore, is where I’d make my biggest push for quality control. There should be a greater demand and expectation that these speeches should be crafted in order to mean something to an audience. They should strive to be either insightful, or entertaining, or contemplative – something to forcefully commemorate the moment. First off, the list of “thank you”s has got to go. “My parents, my agent, everyone at the production company, my dog …” (yes, this year someone even thanked their DOG!) Send these people a telegram the next day, with a box of fruit if you like, but the general public watching simply doesn’t give a shit about them. They care about YOU – about what you are thinking and feeling about either the film you made, the work you put into it, the recognition you are receiving for it, etc. The extent to which each and every Oscar winner can transform the speech into a personal, well crafted moment for an audience to savor is the extent to which we will start to get Awards telecasts that are more interesting to watch.

So here’s my suggestion. Are you ready for it? It’s pretty radical, so I’ll give you a moment. Okay, Academy, what you should do every year is … Audition the Speeches! Yes, that’s right – once you’ve narrowed things down to five nominees, require them to each prepare and read their proposed acceptance speech to a voting committee. The one with the best speech wins. You may say this devalues the award, but come on who are we fooling? Trying to assess the “best” at a given task each year, among a field of literally hundreds of choices, is already pretty shallow. Furthermore, once you’ve whittled an entire field down to five choices, you have at least theoretically arrived at the best of the best: based solely on quality of performance, any ONE of the choices should be acceptable as the winner. Right? So, that being the case, think of the audience: give them the one who will truly make the most of their moment in the spotlight. This will do more than anything else could to give viewers an Academy Awards ceremony worth talking about the next day.

Anyway, that’s my position and I’m sticking to it. I’d like to thank The Movie Guys for allowing me this moment to get it off my chest. Also my Mom and Dad, of course, my brother Festra, everyone at the office …