Check Out the First Trailer for ‘Skylanders Academy’ 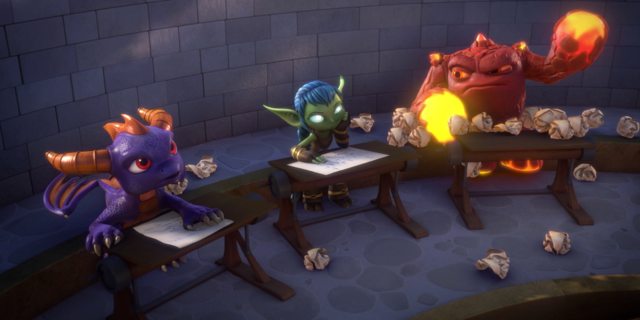 Almost a year ago, Activision Blizzard announced the formation of an in house television and film studio aptly named, Activision Blizzard Studios.  The whole goal of the endeavor is to develop and release their properties for film and television.  Today we get our first look at their first project, Skylanders Academy, releasing October 28 on Netflix.

Clearly aimed at kids, the series follows the heroic adventures of the Skylanders team, a group of heroes with unique elemental skills and personalities who travel the vast Skylands universe, protecting it from evil-doers and showing the next wave of Academy cadets how to do things the “Skylander way.”

Based on the bestselling video game created by Toys For Bob, Skylanders was one of the pioneers of the toys-to-life category.  Similar to Lego Dimensions, Nintendo Amiibo, and the now defunct Disney Infinity, Skylanders requires you to collect the character figures to play in game.  Or you can do what I and some of my friends do, collect the figures but not have the game.

Hopefully this does well for both Netflix and Activision Blizzard.  It’s always better for creative control to remain with the house that developed it.  George RR Martin had input on Game of Thrones, the same for JK Rowling with the Harry Potter movies, going so far as to pen Fantastic Beasts and Where to Find Them script.  Of course the best example of this is Marvel and everything the house of ideas has built in theater and television.

Activision Blizzard has more than enough properties to keep their studio busy for a long time.  Call of Duty, Destiny, Diablo, StarCraft, just to name a few.  Hopefully Skylanders is just the beginning of a successful in house studio.