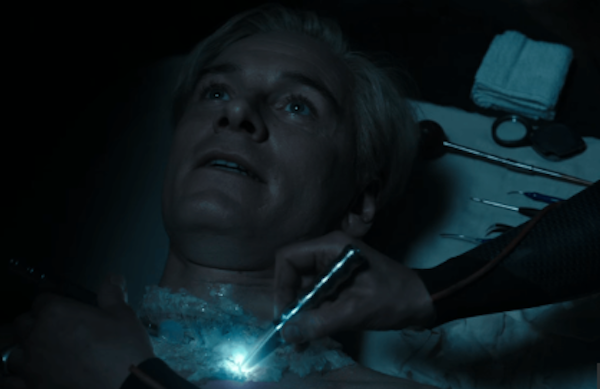 Alien: Covenant will soon be upon us, and FOX is doing some pretty brilliant marketing with a short prologue film.  Released Wednesday, The Crossing bridges the stories of Prometheus and Alien: Covenant by telling us how David (Michael Fassbender) survived.

The Crossing picks up “10 years after the destruction of the Prometheus” according to Variety.  And, it shows us how David was repaired and nurtured by Dr. Elizabeth Shaw.  Can’t we all agree that fully repairing David is at best, hubris… and at worst, a very bad idea?  His full recovery can’t be good for the people on the Covenant, right?  Fassbender looks to be playing David in the new film… and a new droid with the same face, Walter.  Two Fassbenders can only be bad news for characters and good news for fans.  I mean, come on.

David and Shaw are aboard a commandeered alien ship continuing their search for the Engineers.  The end of the short sees David looking out onto a world we don’t yet know.  Is it the world of the Engineers?  We’ll have to wait and see.  Though The Crossing doesn’t get us all the way to the time of Covenant, director Ridley Scott confirmed recently that the next Alien film, called Alien: Awakening will live in the space between Prometheus and Covenant.  So, perhaps we’ll see that place again in the future-past.

For now we can pour over this short and look forward to Alien: Covenant, which premieres May 19.