Shadowhunters Revives the War Between Werewolves and Vampires

It’s one of the most classic grudge matches in the supernatural and fantasy world. The battle between vampires and werewolves. For whatever reason, these two creatures of the night seem to have been natural enemies since time immemorial, not unlike creepy cats and demonic dogs. This beef has stretched across virtually every media platform imaginable, from movies to television to books to video games. If anyone had thought that these creatures had cashed in all of their cultural currency, think again, because they’re both making a big comeback. 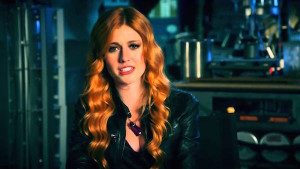 The age-old conflict has now been resurrected once again in the hit new series Shadowhunters on the newly renamed Freeform network. The show is based on the popular young adult novels by Cassandra Clare, The Shadowhunter Chronicles, and focuses on the adventures of Clary Fray, a teenage girl who learns on her birthday that neither she nor the world around her is what it seems. Fray discovers that she comes from an ancient line of defenders known as Shadowhunters, who spend their lives battling demons. She is quickly thrust in a world of supernatural escapades featuring angels, warlocks, werewolves, vampires, and more.

Shadowhunters launched as the network’s #2 series premiere in both Adults 18-49 and Adults 25-24 with (1.6 million and 1.4 million viewers, respectively). It was also the #1 launch of a new series of all-time for men 18-49 and 25-54, as well as the #3 launch on record in total viewership. With numbers like this, it’s no surprise that the series was picked up for a second season. Additionally, it just goes to show the continued popularity of vampires and werewolves in popular culture.

Shadowhunters is but one in a long list of movies and shows that has dealt with the supernatural civil war between bloodsuckers and lycanthropes. Many sci-fi and fantasy fans might immediately think of Team Edward and Team Jacob from Twilight or perhaps the clash of the two sides on HBO’s True Blood. But True Blood ended two years ago (after languishing during its final seasons) and the final Twilight film came out in 2010, so it seems as though both of the mythological races have been due for a return.

Between Shadowhunters and the CW’s The Originals, werewolves are making a comeback on television. We’ve been seeing that effect on to video games, too. Both creatures have yielded tons of video games of varying quality from classics like Altered Beast and the Vampire: The Masquerade series to more casual titles like Full Moon Fortune. The latter is a slot-reel variation on Betfair’s platform that cashes in on the craze by having players testing their luck against the lunar cycles. There has already been a mobile game for The Mortal Instruments, so we wouldn’t be surprised at all to see another title in the near future that would offer fans another chance to step in to the shoes of their favorite Shadowhunters.

The first season of Shadowhunters will be wrapping up soon with the finale set to air on April 5, 2016. There’s no word yet on the plot for the second season, so it’ll be while before we see what Clary and company will be up to next. With any luck, we’ll get a new game or something to keep us busy while we wait.