The new season of Shadowhunters opens only a few hours after the finale, on the deck of Valentine’s ship with Jace picking his way over the bodies of people who didn’t have the strength to become Valentine’s new Shadowhunters. Clary appears, telling him that she is there to rescue him. He refuses to go with her, but she refuses to leave without him. Valentine comes up on deck and catches them, and a battle ensues between Jace and Valentine. Jace kills his father, and runs to the underneath of the ship with Clary. Underneath the ship, Valentine comes back, not actually dead, begins fighting with Jace again, and Jace takes them over the railing in to the heart of the ship. Jace looks about him to see that he is in the heart of a Downworlder prison, with werewolves, vampires, and fairies all locked up in cages and in chains. Clary is revealed as illusion, and Valentine tells him he was only testing Jace’s loyalty, which is clearly severely lacking, and has him knocked out and taken to be tortured. 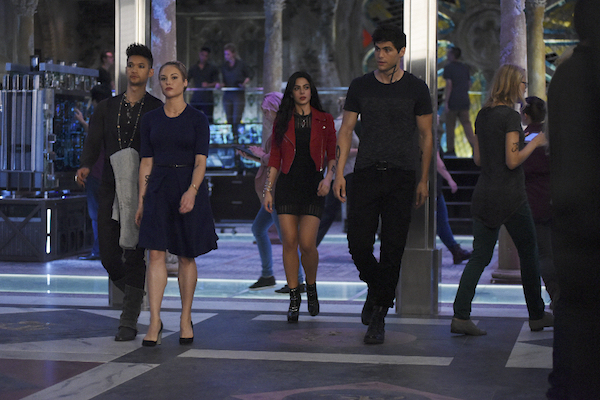 Back at the Institute, Lydia, Isabelle, Alec, and Magnus are all trying to figure out where Jace has gone. Alec is close to tipping over the edge, and snaps at Lydia when she tries to reassure him. As she is still de facto leader on the Institute, she dismisses him, and he storms off.

Deeper in the Institute, Clary finds Jocelyn, who is still adjusting to waking up. Jocelyn tries to explain that she was only trying to protect Clary from her old life. Clary still demands an explanation from her mother, which Jocelyn promises her at a later date. Clary reveals that she has the box that her mother used to take out once a year, which Clary tells her she now knows is full of stuff that belongs to her brother. Jocelyn is shocked that her son is still alive, thinking that he had died in a fire, and Clary tells her that it’s Jace.

On the upper floor of the Institute, Magnus chases Alec down, Alec apologizes to Magnus for his outburst, and Magnus tries to comfort him. Alec tries to explain the depth of the parabatai bond to Magnus, which Magnus doesn’t understand.

Back with Jocelyn and Clary, Luke and Simon find them, and they discuss the changes that have happened over the course of the past few weeks to catch Jocelyn up. When Jocelyn asks what changes they are talking about, Simon’s fangs descend, revealing that he is a vampire, much to Jocelyn’s shock. Their reunion is cut short when a meeting in called in the heart of the Institute. The meeting, called by Maryse Lightwood, is to introduce the new head of the Institute, a man named Victor Aldertree. As his first order of business, Victor orders a lockdown of the Institute. Clary wonders who will find Jace if none of the Shadowhunters are on active duty, and Isabelle reassures her that they will find him. Victor asks Clary to come to one of the offices with him to ask her some questions about Jace. He asks her if her brother could have been in league with Valentine all along, which Clary denies, even though Victor doesn’t believe her. 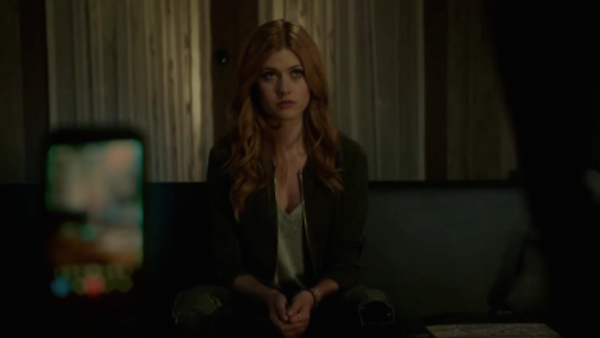 In a chamber of Valentine’s ship, Jace is being hung from his hands and whipped by some of Valentine’s goons when the man himself calls for a halt of the torture. He brings Jace to the kitchen to eat some spaghetti, Jace’s favorite childhood food, but Jace instead tries to attack him before his father disarms him. When he asks his father why he abandoned him, Valentine says that he was only trying to protect his son, saying that Jocelyn was the one who really abandoned him. When Jace asks why she felt like she had to, Valentine reveals that he had been injecting Jocelyn with demon blood while she was pregnant with him, to Jace’s shock and rage. Valentine tries to explain why this is a good thing, and takes Jace to the deck of the ship.

After the meeting, Magnus goes to leave the Institute, Alec follows him and asks Magnus to help him track Jace using a dangerous spell that almost killed Alec the last time they used it. When Magnus refuses, Alec asks him why not, after everything Alec has done for him. Magnus calls him out on his selfishness, pointing out that everything Alec has done has only been for himself, before storming home. 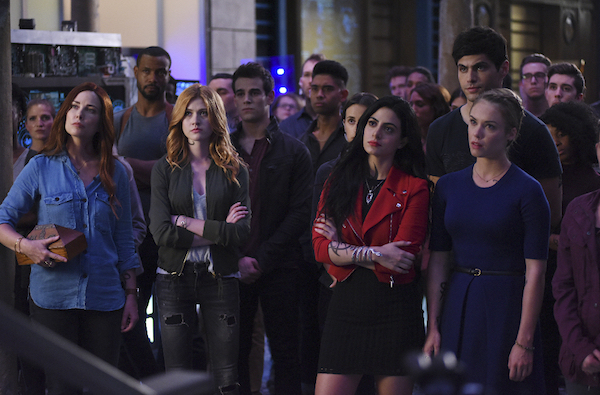 Inside the Institute, Victor gives a dead or alive order to find Jace, and orders that Jocelyn and Clary can’t leave. When Alec and Isabelle protest, Victor orders them to stand down, lest they want to be stripped of their runes. He also tells Luke and Simon to leave, but since sunrise is soon, Simon will have nowhere to go if he leaves the Institute. 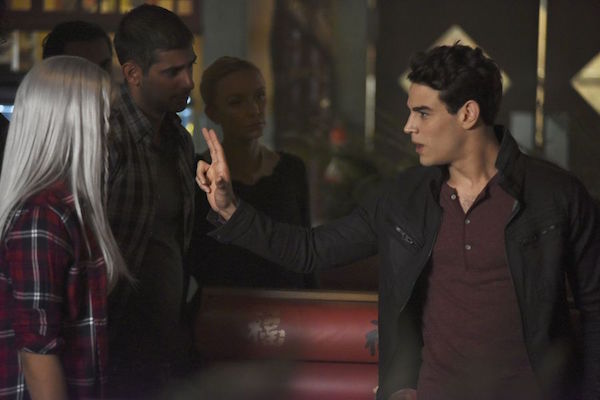 Luke takes Simon to the werewolf den, and they discuss the problems of the Clave. Luke tells Simon how rigid they have always been, and then redirects the conversation to Simon telling Clary how he really feels about her before leaving. The werewolves that Luke has left in charge of Simon lock him in the garage with no way out, so Simon just gets comfortable and sleeps until moonrise.

On the deck of the ship, Jace and Valentine watch the new Shadowhunters training. Jace asks his father why he experimented on him, and Valentine spouts his fascist beliefs about Downworlders and their subservience to Shadowhunters, to which Jace defends them. Jace tells his father that he could leave at any time, to which Valentine takes a soldier and demonstrates that there is a force field that will burn you to pieces if you try to leave.

In the training room of the Institute, Clary and Isabelle train to discuss plans to find Jace while snaking around Victor’s orders. As Alec tries to leave the Institute in search of Magnus, Maryse follows her son and scolds him for what she deems his shameful behavior. Alec tells her that he will not give up the search for his brother, no matter what Maryse says, and goes in search of Magnus.

At the werewolf den, Victor finds Luke and warns him against his allegiance to the Fray women, to which Luke asks him to leave. Shortly after he does, Clary arrives, having snuck out of the Institute in search of Simon. She finds Simon in the garage, and they begin to hash out a plan to find Jace when Jocelyn arrives. As they go to leave, Jocelyn asks for Clary’s phone and stele before locking them inside of the garage, and she goes to look for Jace. 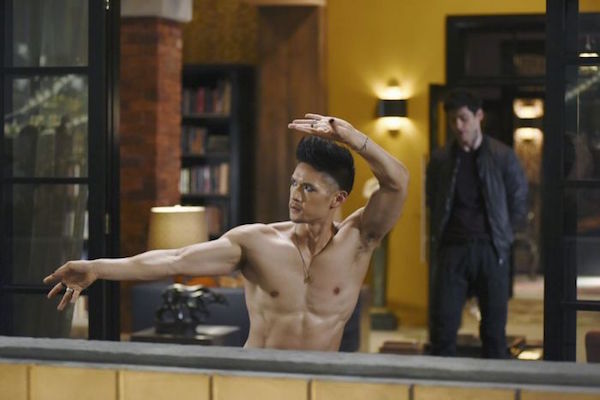 That night at Magnus’s apartment, Alec goes to apologize for his selfishness, and while Magnus forgives him, he also reminds Alec that things will always be crazy, so you can’t stop living your life through it. Magnus agrees to use the rune to track Jace, but before the magic can get underway, Jace and Valentine broach land through a Portal, and the parabatai bond is restored. They rush to the Institute to try and call off the search, but Victor ignores them and tells the Shadowhunters to go find them.

Simon and Clary have fruitlessly been trying to break out of the garage, and Clary finally tells Simon to give up. They sit on a crate and reminisce about their friendship, and they talk about how much things have changed. Simon gets close to telling Clary his feelings for her when the door falls, and they go to find Jocelyn before she can find Jace and Valentine.

Valentine takes Jace to a pizza place in Brooklyn where the wife of the proprietor, Maria, was turned in to a vampire and killed her husband in her hunger. When they enter the establishment, vampires are feasting on mundanes, and Jace immediately goes to slay all the vampires to free the mundanes. He asks for Maria and kills all of her forces that she sends after him. The fight between Jace and Maria goes in to the street, but before he can kill her for breaking the Accords, she swears fealty to the Clave. Valentine tries to egg Jace to kill her, which he can’t do until she tries to attack him. Jocelyn, Clary, and Simon arrive all at once, and Jocelyn fires an arrow at Jace, which Valentine takes for him before taking him back through the Portal.