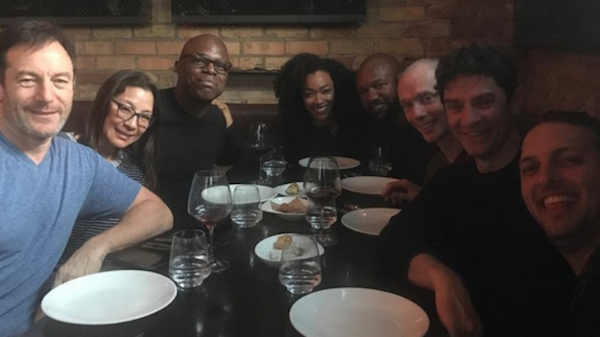 Look at these fabulously attractive people having a nice time together at a birthday party.  Oh, and they just happen to be key cast members in the upcoming Star Trek: Discovery, no big deal.

The cast is in Toronto working on the show, and apparently had a nice friendly dinner together to celebrate actor James Frain’s birthday.  Actor Chris Obi posted the pic on his Instagram and trekmovie.com reported.  This is the first official, non-official picture of the cast assembled in the same place.  Let’s hop this is the beginning of an era.  This is our first glimpse of what Star Trek fans everywhere hope will be a long, productive and satisfying reign on the airwaves.

RELATED:  ‘What We Left Behind’ a STAR TREK: DEEP SPACE NINE Documentary

Star Trek: Discovery is set to premiere on CBS All Access in the fall of 2017.