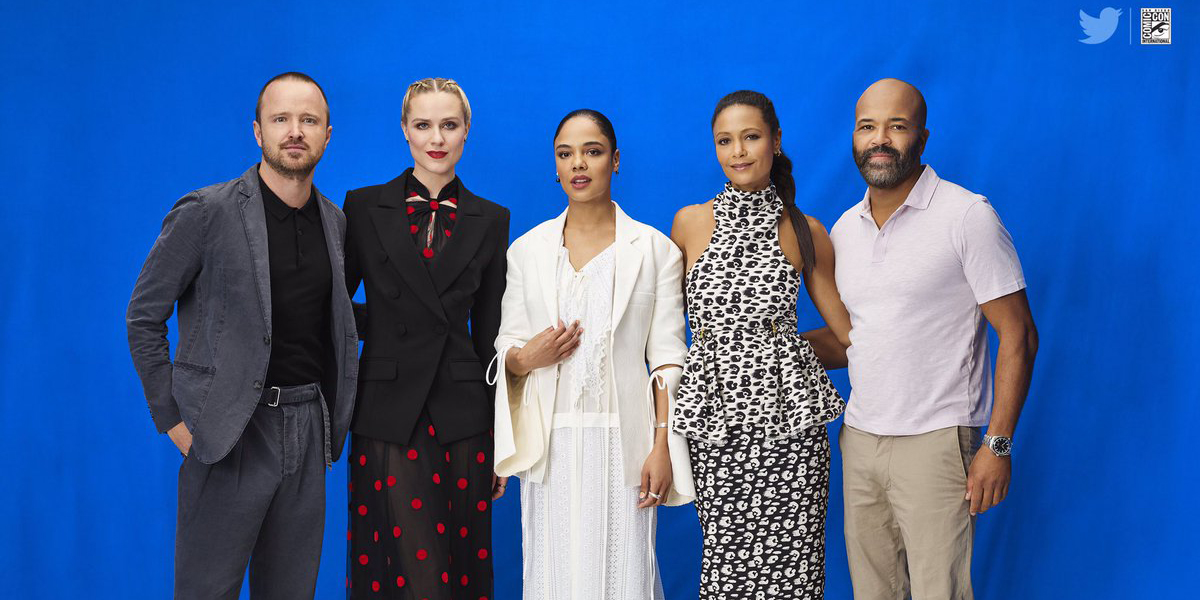 The Westworld panel at San Diego Comic-Con today did not disappoint. In addition to being in the same room with creators/ executive producers/ directors/ power couple Jonathan Nolan and Lisa Joy, Thandie Newton (Maeve), Aaron Paul (Caleb), Tessa Thompson (Charlotte Hale), Evan Rachel Wood (Dolores), Jeffrey Wright (Bernard) and surprise walk-on Luke Hemsworth (Ashley Stubbs), the audience members were the first to see the new trailer for Season 3. (Which is at the bottom of this post, if you want to scroll on down.)

Moderator Amy Webb led the panel through a spoiler-light look at the characters and the next season, with Aaron Paul providing the most specifics and Luke Hemsworth perhaps the most entertainment. Love or hate the show, it looks like we’re in for stunning visuals and more mind f***s in Season 3.

RELATED: Have you read our recaps of Westworld’s second season?

“The form of AI we have on this show is thoughtful. Murderous, but thoughtful.” – Jonathan Nolan

“It… makes me think that we are all living in a simulation.” – Aaron Paul

“I never like to leave the house without a Hemsworth.” – Tessa Thompson

“The thing about dystopias is that they can look really beautiful.” This was what they’ve been planning from the beginning per Jonathan Nolan. #SDCC #Westworld

Christopher Nolan made Jonathan watch Blade Runner on repeat said, “it was pretty weird. Not that it’s not a good movie!” The most unsurprising fact ever 😂 #Westworld #SDCC2019 #HallH

…And just like that, a whole world of people will now have a life-long desire to be cradled and spooned by @evanrachelwood. #Westworld pic.twitter.com/1LqwYWHvvr

“(Ford) is a composite of several real people.” Who are they?
“I always always influenced by Prospero, who were you writing?!” asks Lisa Joy of Nolan #Westworld #SDCC2019

We all have a role to play. #Westworld pic.twitter.com/mkoCiGQVOm