Home » TV & Streaming » SDCC 2017: THE WALKING DEAD Tributes, Season 8 Trailer and a Look Back at the First 99 Episodes

SDCC 2017: THE WALKING DEAD Tributes, Season 8 Trailer and a Look Back at the First 99 Episodes

The Walking Dead is one of the most electrifying panels of SDCC.  And this year was no different.   The cast and producers return to SDCC for the fans and to pay tribute to stuntman John Bernecker and George Romero.

“John passed away this week after he was injured doing something he loved: helping tell stories that excite, entertain, and give people escape,” Showrunner Scott Gimple said. “He helped make movies and shows for people like everybody in this room. John was someone who was beloved in the stunt community, who helped train people and helped them break  into the business He was living his dream, and he helped other people do the same.”

The panel wasted no time showing the season 8 trailer.

The trailer starts with an eerie tone.  Negan has captured Father Gabriel and tells him to get ready.  The trailer shows everyone preparing for war.  Some inspiring words from Rick and Maggie. Jerry thanks Ezekiel for being a “cool dude!”

And….BOOM!  Gunfire! Fights! Daryl blowing stuff up from his motorcycle! Carol shooting a big gun!  So much action! And then the logo…but wait! There’s a flash forward to a much older Rick Grimes waking up. 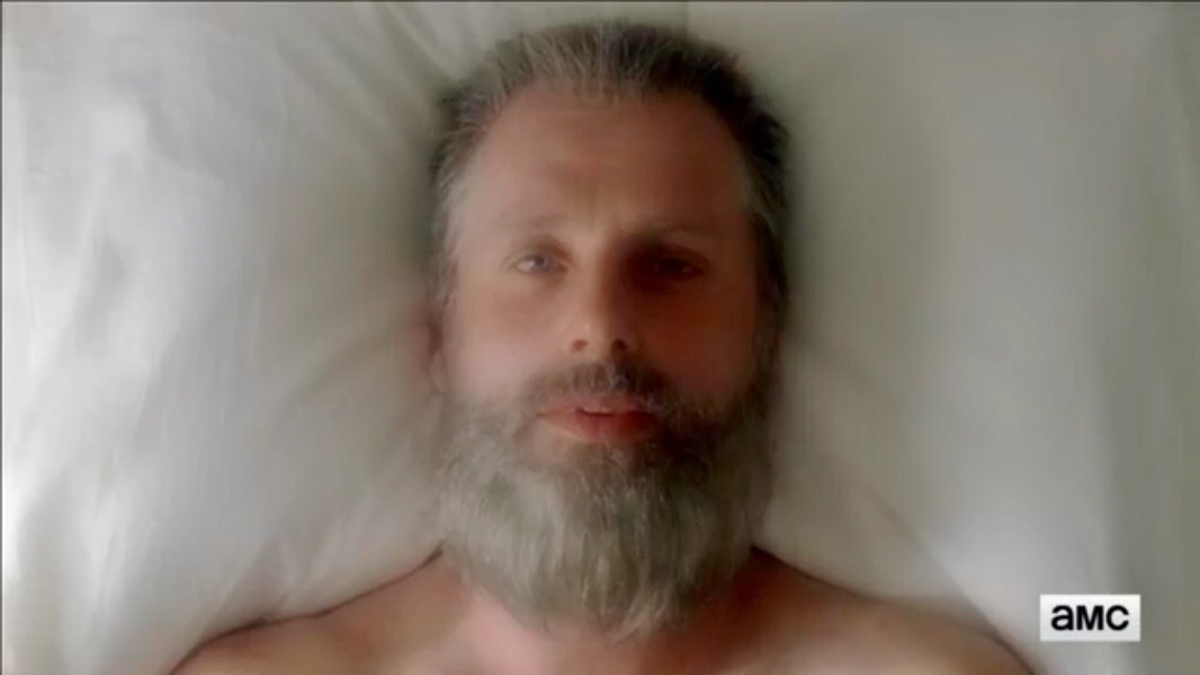 “It’s easy to see and safe to report that this season will be very action packed and move at a very fast pace” said creator Robert Kirkman.

The season premiere of season 8 is the 100th episode of the series.  Kirkman said to look out for some social media features to celebrate the 100th episode. He presented a video to take a look back at the first 99 episodes.

According to comicbook.com, footage included Rick from the first episode waking up in the hospital, meeting Morgan, meeting Glenn, reuniting with Lori and Carl, leaving Merle behind, Shane playing with Carl, the group arriving at the CDC…

Sophia getting lost in the woods, Carl getting shot, Shane turning into a walker, Glenn being lowered into the well…

Lizzie looking at the flowers, Rick meeting Gabriel, Beth and Daryl in the woods, Michonne and the family on the train tracks, Carol saving the day, Abraham raising a glass…

The group going to Washington, meeting Aaron, entering Alexandria, the quarry full of walkers, the explosion in the lake…

Jesus’ introduction, the raid on the Saviors, Michonne and Rick becoming a thing…

Negan’s introduction, the Saviors, the Hilltop, the Kingdom, and the preparations for war….whew!

Some of the highlights came from the questions from the audience. Here’s the information from those questions.

A fan did ask the cast and producers about how George Romero affected their careers. Kirkman responded with how Night of the Living Dead make him fall in love with Zombie genre.  He was very sad to hear of Romero’s passing.

Nicotero, who worked with Romero, told a story of the time he took Robert Rodriquz, Quinten Tarantino, Simon Pegg, and Edgar Wright to the premiere of Land of the Dead in Pittsburgh.  He took them to see some of the places where the film Day of the Dead was filmed. When the filmmakers met with Romero, they had a hard time containing their excitement. Romero told them to grow up!

The cast was very appreciative of the fans mostly.  Lincoln says he knew this show would be a big hit when he heard the fans at his first Comic Con.  He called TWD the most incredible thing in his life.

The cast was very friendly with the fans and appreciative of those who have been with the show since the beginning.

There was lots of laughter, mostly when everyone was making fun of the way Lincoln says ‘CORAL’ instead of ‘Carl.’  And Morgan was almost as entertaining as his character Negan, throwing out expletives when necessary.

There were many fans in TWD cosplay, the funniest was two guys dressed like King Ezekiel, holding a tiny stuffed tiger, and Jerry. They approached the mic to ask the cast a question, but first they welcomed everyone to the land of Hall H.  Fan Jerry told everyone to stand for King Ezekiel, except for Mr. Peyton of course.

The Walking Dead season 8 premieres Sunday, October 22 on AMC!  Keep an eye on Geek Girl Authority for everything TWD!