Okay, so this is going up a day late. Why? Because Saturday was sort of bananas and…also… I forgot. So here comes yesterday’s posts all in a row.

7:30am – I got up and walked down to Ralph’s to get some breakfast stuff for Audge and our roomies at the condo. For those that don’t know, there’s another convention happening here in San Diego, it’s called “Outdoor Pee Fest” and you can only really see it in the early hours before the masses arrive. My review on a scale of 1 to 10: a very soft 4.

11:15am – After eating and posting I decided to walk down and make another run at the convention floor. Audrey called me crazy, because Saturday is the busiest day. But that was fine by me. I wanted to see Maximum Comic-Con. I got my wish. Super huge crowds and another f*cking marching band! Been coming to this convention for almost a decade and I don’t remember marching bands being a huge feature, but they are here and they are loud. Saw some great cosplay. Especially this guy doing Maui from Moana. As I took this picture, some asshat yelled, “Hey Maui, you’re fat!” Without hesitation Maui yelled back, “I ain’t fat, I’m a demi-god, brau!” You are indeed, Maui. And you’re fantastic. 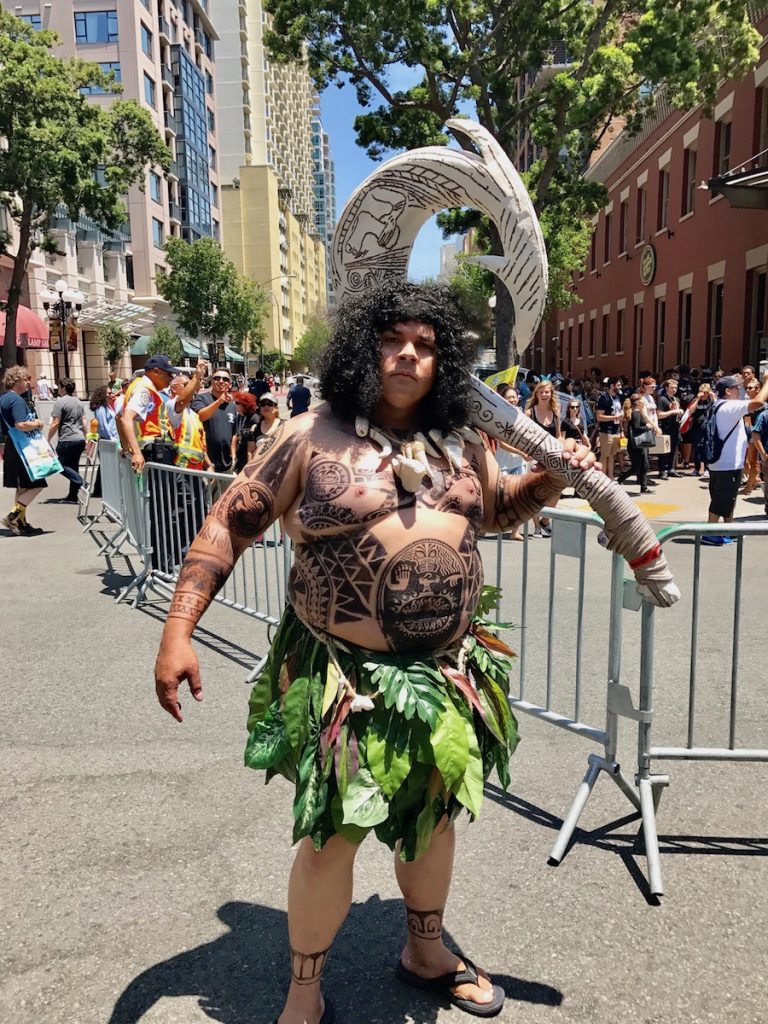 11:30am – Audrey had interviews and stuff today, so I decided hit the floor solo and take a little ramble through the madness. My intention was to not spend any more money. But intentions are only as strong as the person making them and I am a weak, weak man. If booze were geeky t-shirts and Gandalf figures, then I am the Charles Bukowski of the nerd con. I’m sick and I need help! But I’m not the only one. There were thousands of junkies all around me. Saw a guy pawing a Funko Pop figure of Gandalf and heard him say to no one in particular, “I need this.” That guy was me.

2:30pm – Made it over to the Hilton Bayfront to meet Audrey for a party. On my way over I snapped a few more pics. An uncertain looking Barb and a beardy Eleven hanging out with the monster from the Upside Down. Plus Starchild from Kiss and The Devil (AKA Darkness) from Legend with a Stormtrooper which, for some reason, was very disturbing to me. But the best part of walking through a big crowd is overhearing little snippets of conversation. My favorites from today: “I think I just had my last diarrhea. At least I hope so.” And a crying five-year-old yelling at his dad: “But you already have SO many comic books and you’re old.” The kid makes a great case. At the same time, suck it junior, Daddy’s shopping. 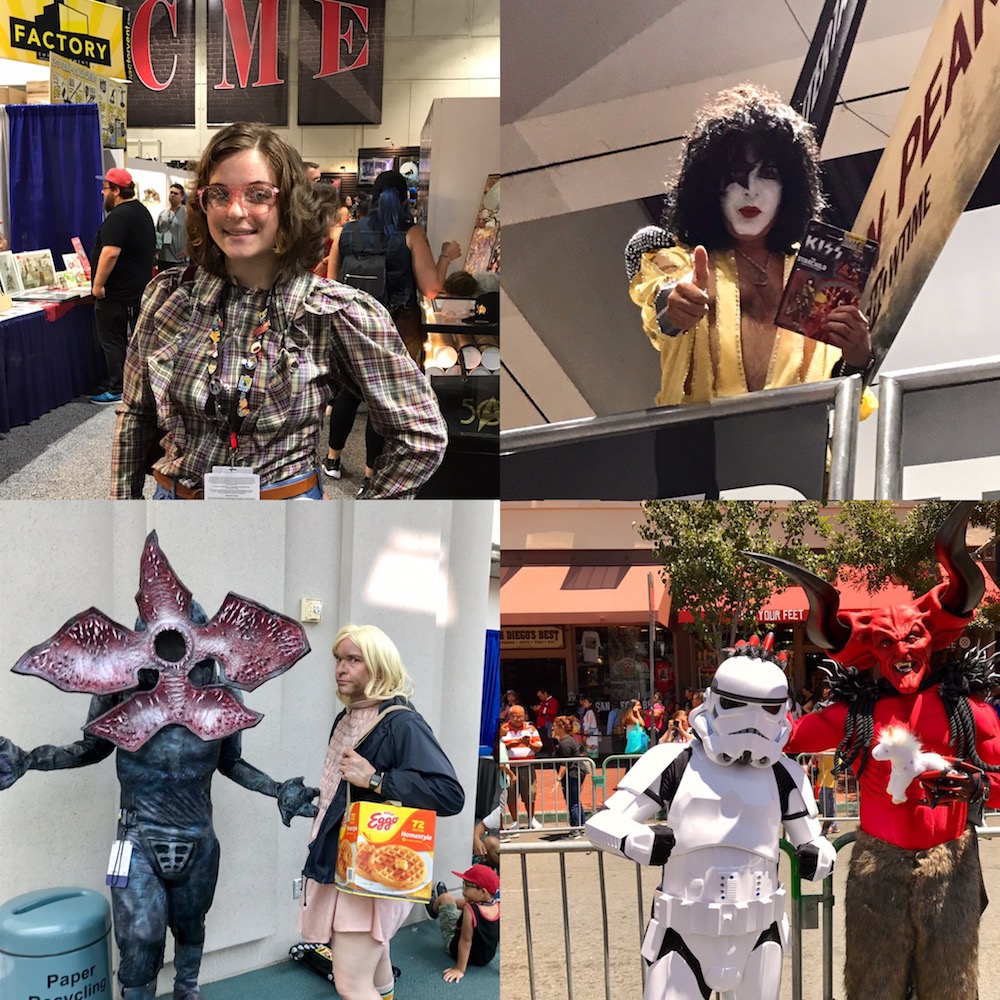 After Audrey’s “I’m In The Nerd Business” panel (more at GGA), the rest was parties. Here’s the deal, there are two Comic-Cons: the geeky and the “Hollywood”. As someone who kind of belongs to both worlds, I feel guilty about guest list exclusivity at a convention for fans, but I also like free drinks and bite sized snacks. But this is a part of my Comic-Con so, here we go: -Went to a party thrown by Big Bang Theory creator Bill Prady. We’re friends of friends and he’s always kind to invite us. It’s fun because it’s very small and full of interesting people. One year I chatted up George R.R. Martin and another year I stood next to Neil Gaiman who’s rumpled jacket did not smell terrific. This year we had to leave early. For this sin our friend Sean Russell sent me a picture of he and the guy who played the punk Spock shoulder pinched in Star Trek 4. #Fair 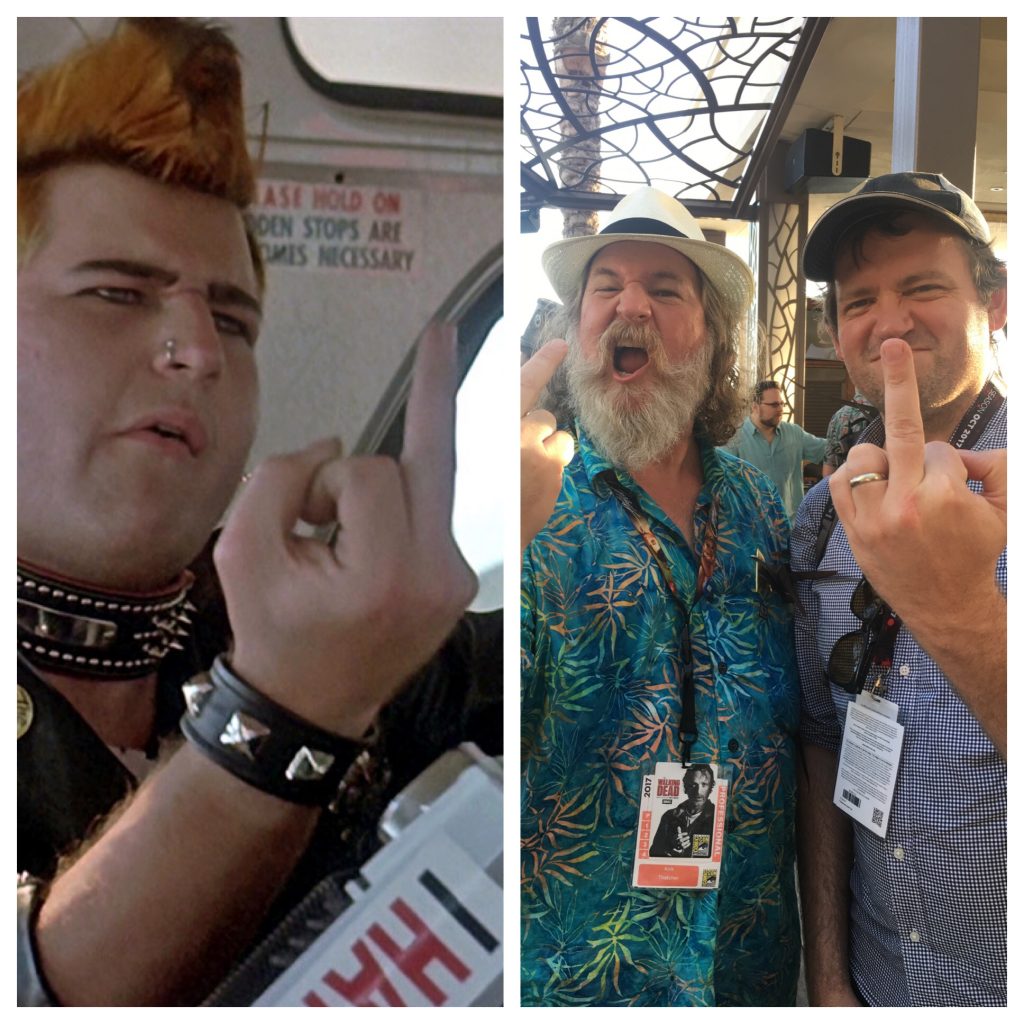 – Next we hit the 20th Anniversary Buffy The Vampire Slayer party thrown by Legion M and Fox (Thanks for the invite Terry Lubaroff). Very fun. Lots of drunk fans and the bar tricked out with a very Buffy vibe. Best part was seeing a dude we’d seen at the last party dressed as The Hound now dressed in a Hound/Colonel Sanders mashup. Plus they had little red velvet milkshakes. Perfect pairing with gin! 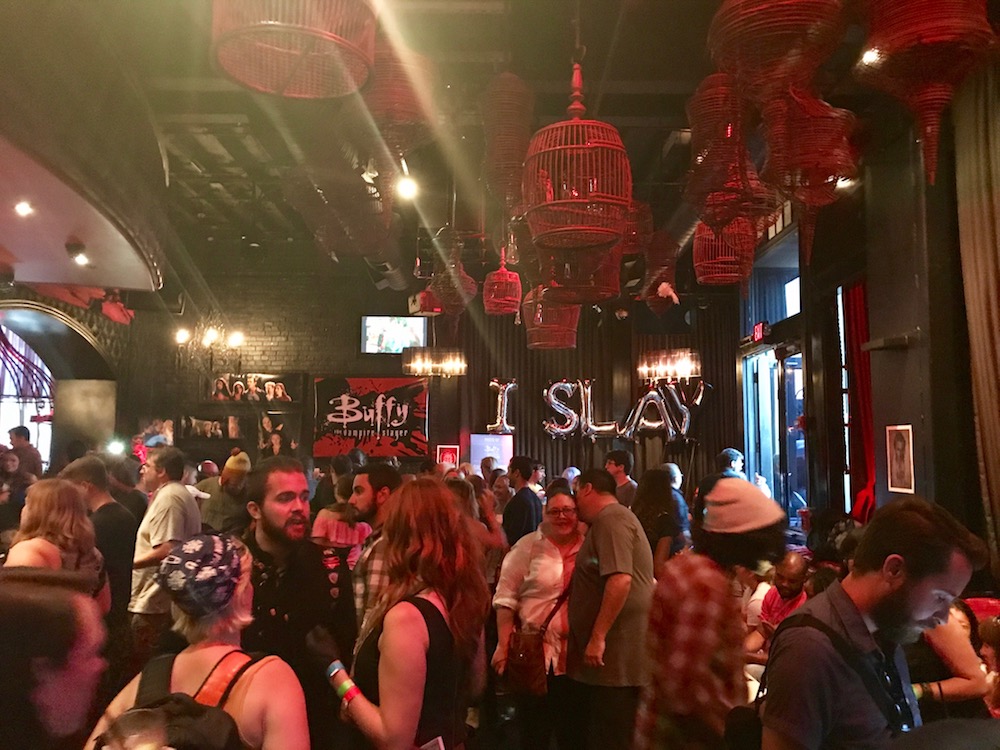 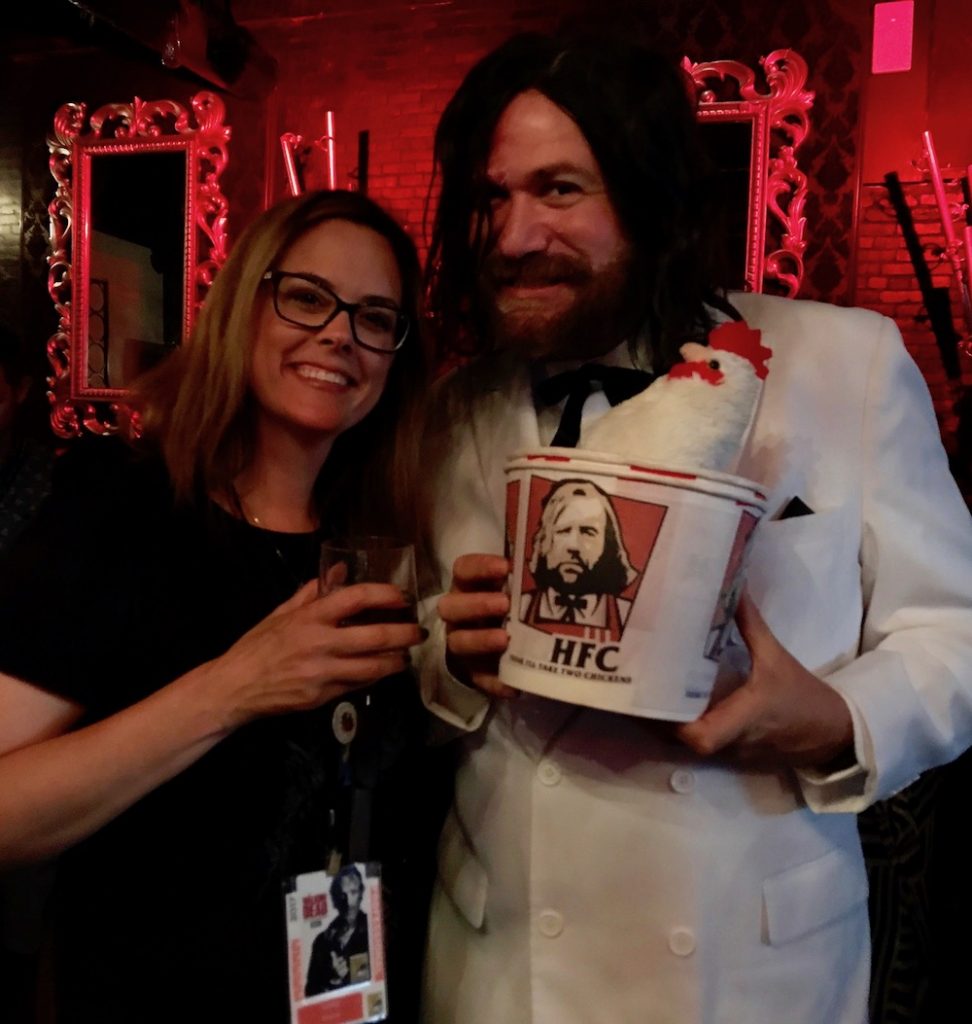 – Next up, the NBC party. Completely different vibe. Literal velvet rope. Stone faced ladies with iPads telling crashers to beat it. Inside, more free drinks and tiny desserts. The theme seemed to be Midnight, Texas (produced by our friend David Janollari) and expensive shoes. One lady complained that there was no buffet at the party. This was a problem because she was drinking a bunch and needed food to sop up the booze. “I can’t get drunk in front of these executives!” #AlsoFair

– Our group was headed to another party, but we called it. We knew that no good could come of more free booze. That’s called #Wisdom, my friends. Plus, we’re old AF and our feet hurt.