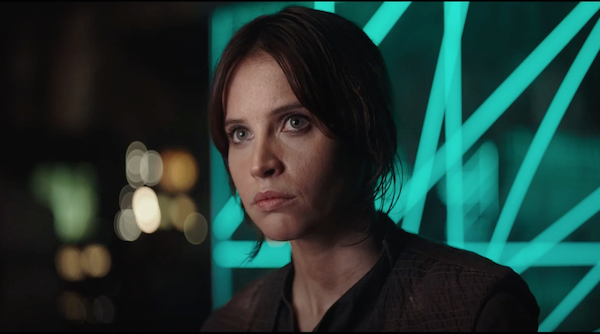 This is a rebellion, isn’t it?

What you are about to view is one minute and fifty-seven seconds of radness. Behold, the new teaser trailer for the upcoming stand alone Star Wars movie Rogue One: A Star Wars Story! And while I’m not jazzed about the subtitle (“a Star Wars story” makes it sound somehow soft and cheesy… like a delicious brie), this trailer has my heart racing (like a delicious brie would do because, cholesterol). It’s better if you watch it for yourself, but if you need a little preparation before your eyes drink in the goodness, here’s what you can expect to see.

As we know from the Internet’s all seeing eye, the plot of this film takes place before the events of 1977’s A New Hope and concerns a secret mission lead by Jyn Erso (Felicity Jones) and a scrappy crew of rebels (including Diego Luna) to steal the plans for some weapon with the super on-the-nose name of The Death Star. In the trailer me meet Jyn in handcuffs as she’s being lead across a rebel base to a meeting with a very classy lady dressed in the best toga you’ve ever scene. This is Mon Mothma (played by Geneive O’Reilly who I do not know, but who looks like she could teach you a thing or two). They list Jyn’s badass rap sheet of crimes against the Empire. She’s trouble this one, but maybe just the kind of trouble they need!

Anyway, she’s going to lead this group of rebels on this suicide mission and with that we are into a montage of images from the film. And that montage is full of martial arts, new black clad Stormtroopers, Forest Whitaker looking wise and tough and, best of all, AT-AT’s firing away on a tropical planet, like the Empire has attacked a Sandals resort. It’s mind numbingly exciting stuff.

Most of all one gets the feeling that this side path off the main Star Wars trail will have a different energy. Perhaps a little less Epic myth and a little more gritty action. This film doesn’t seem to be about characters who have been “chosen”, but who instead have been moved by the circumstances of their lives to resist the Empire and it’s fascist tentacles. And with that, in less than two minutes, they seem to have opened up the Star Wars cinematic universe in an incredible way. Enough yammering. Enjoy the trailer and fingers crossed that this film pans out the way we hope it will!

ICYMI:
We are continuing our celebration of #PrideMonth with a look at six of our favorite books featuring queer lady warriors! https://www.geekgirlauthority.com/6-books-queer-lady-warriors/

ICYMI:
Redfall wowed us during the Xbox and Bethesda Games Showcase for #E32021 and we needed to take a closer look! Here is everything we know so far! https://www.geekgirlauthority.com/e3-2021-redfall/

ICYMI:
Lumberhill is a ball of mayhem all tied up in a flannel bow. Check out what we thought about this chaotically fun multiplayer. https://www.geekgirlauthority.com/gga-game-review-lumberhill/