Home » The Daily Bugle » Rogue One: Not A Review

Rogue One: Not A Review 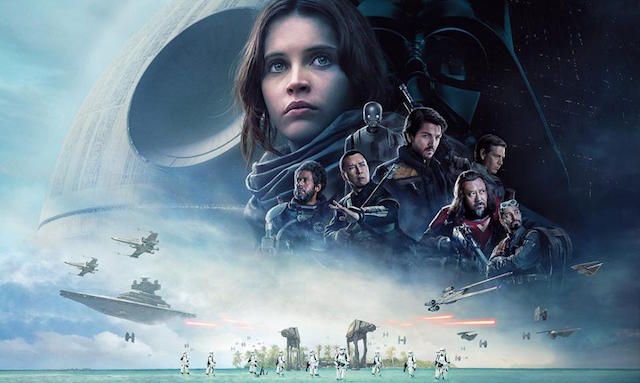 I’m sitting here staring at my computer screen, still processing Rogue One. To say that I loved it, isn’t enough. This is spoiler free, so need to worry and it’s not a review. I’m terrible at writing reviews so this is just going to be about why I feel this movie was important and why I believe that it’s a game changer in the Star Wars universe.

This movie felt like the best of all three original movies, into one. There were moments that felt like A New Hope, at times Empire and also Jedi. For a fan, it had everything you wanted in it. It had heart and some of the best action and battle scenes I’ve ever seen, and although it’s a stand alone movie the tie-ins and easter eggs, and call backs are done so neatly, it’s perfect. Watching Rogue One definitely gives A New Hope more gravitas, the stakes have risen, because we’ve seen the struggle, not just one sentence in a crawl.

It’s a war movie, through and through and Disney held no punches! Not a spoiler, but trust me when I say that they went for it and you feel it.

As far as being a game changer I think it benefited from being a stand alone movie. It didn’t have to follow the mythos of the Skywalker stories, you have a wider birth in which to play and my favorite thing they did was to add Donnie Yen into the mix. In thinking of Star Wars, I would never have thought anything new would have mattered that much but to introduce martial arts into the game, I mean it blew my mind.

Then I cried. The third act began and I started crying and didn’t stop. Part of the reason I can’t say without giving away the movie, part of it was just because it was everything I wanted it to be, and the rest of it was deeper. It meant so much to me to see a Mexican as a lead, a woman as a lead, and three Asian actors all in lead roles.

Kumail Nanjiani tweeted exactly what I was feeling:

Rogue One tweetstorm (no spoilers): I usually watch movies w a critical eye. Solid act 2, but they fumbled act 3 etc.

Didn't think about structure once during Rogue. The fight in Jedha struck me. Ppl who looked like me & dressed like my ppl were good guys!

I strangely started tearing up. And I'm a grown man. I thought of kids watching this movie & seeing ppl that look like them kicking ass.

I held back tears for the rest of it. An action movie guy that looks like me? How cool! (And I know @rizmc only looks like me in my dreams.)

For the 1st time I really felt the importance of representation. I felt like a kid watching this movie. I felt like I could do anything.

So I never once thought of structure or acts or anything. I just smiled, fought back tears & walked out into a better world. Ok that's all.

There are a few out there who share a different opinion and that’s fine. There is the argument, again, that there weren’t enough females in the movie, and I understand that but, to see such diversity in race and culture, was huge to me.

I’ll be seeing it again AND buying it!