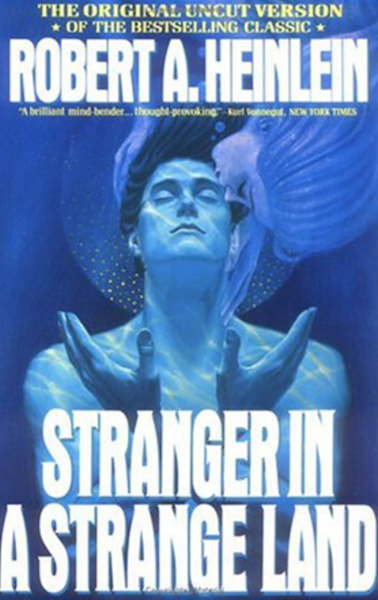 In the book, Earth sends an expedition to Mars but loses contact with them. Twenty five years later, another expedition lands on Mars and finds a single survivor, Valentine Michael Smith. Smith was born during the first expedition’s transit to the red planet and was raised entirely by the Martians. (Yep! Martians!) Smith travels to Earth in early adulthood (the Martians make him go with the humans).

The novel explores his interaction with — and eventual transformation of — terrestrial culture. It predicted many of the movements and messages of the 1960s — from free love and hippie communes to organized attempts at world peace.

Involved in the development are Syfy, Paramount Television, and Universal Cable Productions.

“Paramount TV is excited to have the opportunity to adapt Robert Heinlein’s seminal work of science fiction,” said Amy Powell, President, Paramount TV. “This novel has resonated with me since college and there’s a reason it has continued to find new fans for over forty years. Syfy’s understanding of imaginative and futuristic programming is unmatched, making them an ideal partner for this series.”

“From my point of view, ‘Stranger in a Strange Land’ isn’t just a science fiction masterpiece…it also happens to be one of my favorite books ever!” said NBCUniversal Cable Entertainment Chairman, Bonnie Hammer. “The story is timeless and resonates more than ever in today’s world. As a fan, I can’t wait to see it come to life as a world-class television event.”

Syfy’s continuing effort to return to the stars has been exciting. With shows like The Expanse, Dark Matter and Killjoys, Stranger in a Strange Land will be in good company.