RIVERDALE Recap and Review: (S02E08) House of the Devil

Mass murder, strippers, and teenage sex. No it’s not a violent R-Rated action movie, it’s Riverdale on the CW! The Black Hood mystery doesn’t progress all that much this week, but we do get sent on a fun red herring goose chase after the Riverdale Reaper and the whole thing ends in tears.

​So without further ado . . . cue the theme music from Ghost during that weird pottery scene . . . 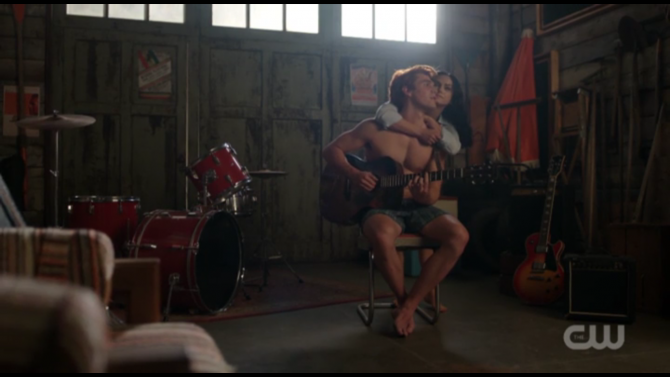 Archie and Veronica are in the throes of passionate lovemaking in various locations when our fave ginger kills the mood by professing his love for Ronnie. Awkwardness ensues and the pair seek to find a distraction from their ‘situation’; something they’re provided by Betty and Jughead who have their own thing going on and ask Varchie to pick up on the Black Hood investigation. Something they jump at and, surprisingly, are quite good at.

Archie and Ronnie visit the Devil’s House; the place where the Riverdale Reaper killed a family of four before disappearing. They discover a 3rd missing child’s initials, JC, on the wall of the home and find evidence suggesting that the Conways had 5 kids, not four. Joseph Conway escaped the slaughter, was adopted out and raised by another family in Riverdale.

Jughead theorizes that Joseph Conway might even be the Black Hood, but as Veronica and Archie follow the clues and match the picture of young Joseph to Riverdale High’s records, they uncover the truth that Joseph Conway is none other than Mr. Svenson the janitor! He provides the account of what happened that night with the Riverdale Reaper. Apparently he was a con man who was passing through town and, after the murder, was killed by a group of men from the town. Justice was done. Case closed. Svenson isn’t the Black Hood so we’re no further along in discovering who the ski mask loving man is. Great development for Archie and Veronica though, connecting the dots in a Scooby Doo-esque way. Unfortunately solving the mystery poses a new problem in that they must now face the devastating effects of telling someone you love them. 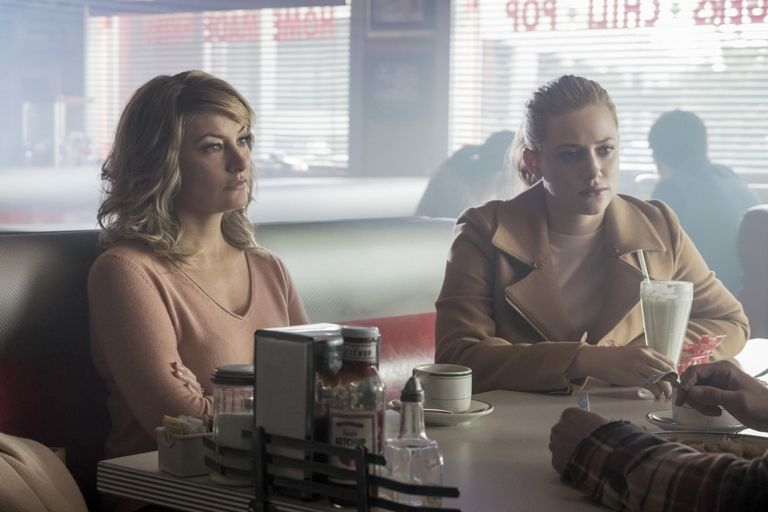 Last week we were introduced to a new stalker/love dynamic in the form of Cheryl and Josie. While Josie seems fairly oblivious, Cheryl is giving off a really creepy vibe and it’s becoming clear that she’s infatuated with Riverdale’s main songstress. How this will play out is anyone’s guess. Badly. I’m guessing badly.

In the world of Betty and Jughead there are some pretty awesome things happening. FP is getting out of jail. Sure he kidnapped a kid and covered up a murder, but that’s the sort of thing that’s low on the punishable scale in Riverdale so he’s free to go, much to the delight of Jughead. The young serpent is further elated when he discovers that FP has made the decision to retire from being a Serpent and is instead choosing to walk a straighter narrower path. They even have a touching father son moment while out biking.

RELATED: CHILLING ADVENTURES OF SABRINA Is in the Works at CW

When FP takes a job at Pops, Jug feels his Dad deserves more and so Betty suggests throwing a retirement party at the White Worm, the Serpent bar, which in hindsight couldn’t have been a more terrible idea.

Alice, a former Serpent, chaperones Betty to the party and seems very at home at the White Worm. You can take the girl out of the Southside, but you can’t take the Southside out of the girl. She’s shooting tequila and hanging out with the locals before you know it.

Nice to see some music returning to Riverdale episodes with a pretty great cover of Mad World, until Ronnie ruins it by letting her feelings, or lacks of feelings for Archie get in the way of things and runs from the bar, followed by Archie. Way to ruin a song guys, but don’t worry . . . Betty picks up the vocals and crushes the ending with a striptease. The whole reason behind the teenager (grade 11 maybe?) hitting the pole is some sort of induction into the Serpents so she can be closer to Jughead. The horror on her mother’s face was well worth the complete inappropriateness of the dance, but the effects are far reaching.

FP flips on his retirement plan, vowing to forever be a serpent. This seems like a dick move until he reveals he’s doing it because he knows about the deal between Jughead and Penny. He essentially sacrifices his freedom so he can take Jughead’s place being in debt with the snake charmer. Not getting into bed with Penny was the one thing FP asked of his son, but it was too late. FP states “you broke my heart, Jughead.” Sad face.

The on again off again relationships of #varchie and #bughead ventures back into ‘off’ mode with all of them breaking up at the end of the episode. Veronica and Archie because she can’t return the love he feels for her, and Betty and Jughead because Jug is afraid Betty is getting in too deep and that he won’t be able to protect her from the Serpents. One step forward, two steps back.

The episode closes with half naked Archie locking eyes with mostly clothed Betty from their respective bedroom windows. Is this foreshadowing that Bughead and Varchie are dead but Barchie may now be a thing?

“Is it true what they say about men that get out of jail?” – Was Alice Cooper hitting on FP? If so, bravo!

A lot of Riverdale parents seem totally fine with their teenage kids hanging out in a biker bar/strip joint.

“We wouldn’t mind seeing more of Archie. He’s brawny and devoted to you.” – Hermione Lodge – Boyfriend, ginger, also a bodyguard.

The Lodges never say “I love you.” Theirs is more a relationship of raw passion and dirty underhanded real estate deals.