Home » TV & Streaming » RIVERDALE Recap and Review: (S02E03) The Watcher in the Woods

RIVERDALE Recap and Review: (S02E03) The Watcher in the Woods

The Watcher in the Woods should not to be confused with that bloody awful movie musical ‘Into the Woods’ where they sing about going into the woods, what they’re going to do in the woods, how when they’re out of the woods they plan to go back into the woods again . . . for two freakin hours! Two hours I won’t get back, I might add.

Instead, the title of this week’s episode of Riverdale. represents more of a cautionary tale for its cast of characters; a fairy tale-esque warning to those who dare step into the darkened woods whether it be literal or figurative. With that in mind, let’s take a look at what Archie and the gang got up to this week . . .

First up, Kevin finally gets to say more than one line. Kevin is the one literally walking into the woods. And why? To find a random sexual encounter of course. I can’t decide whether this set gay men back due its cliche-ridden random hook up in the woods plot line, or empowered them because Kevin is striking out on his own and working within the options he has available. I kinda think the former, because really it’s just silly. There’s a killer on the loose. Although in this case, Kevin’s horniness is helpful because he finds Midge and Moose, both alive. When Betty confronts him, several times, he isn’t moved by her concern for him until the last time he enters the woods and we’re faked out into thinking Kevin is stabbed. He isn’t (I did hold my breath there for a while though). But Betty isn’t done being righteous as she rats Kevin’s moonlight hanky panky out to his dad. While a completely inept police officer, Sheriff Keller still wins Best Dad of a Gay Teen award because he’s constantly supportive of his son, and I LOVE his character for that. Now if he could only catch a murderer, ya know, just once. 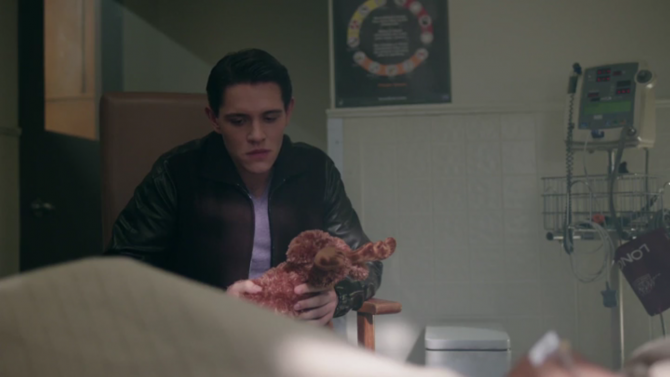 Kevin got a lot of screen time this episode, but it’s his scene with Moose that I truly enjoyed. It was way back in the first or second episode when Kevin and Moose were heading down to Sweet Water River so the latter could explore his sexuality. But nothing has been mentioned since. Until now. The exchange between Kevin and Moose, plus the irony that Kevin gave Moose a stuffed moose, lends some credibility to the belief that there might be something to their relationship. I hope the writers develop this further than just an idle passing moment as I actually want to see Kevin happy.

With Moose shot, the fear in Riverdale is increased as is Archie’s paranoia about The Black Hood who outs himself in a letter to Mrs. Cooper who just can’t keep it to herself and has to make it front page news. Apparently our season 2 killer is out for blood from those he deems as sinners and hypocrites. He shot Fred because he had a brief fling with Hermione, Ms. Grundy because she was a child predator, and Moose and Midge because they were drug users. Not sure on that last one because there seem to be a lot of drugs in Riverdale. The Black Hood could have closed his eyes and shot in any direction and likely hit a jingle jangle user. 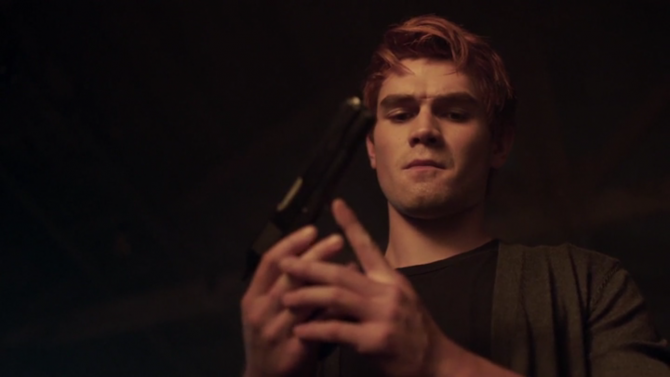 Archie takes it upon himself to form a watch group to keep an eye on the neighborhood. It’s actually not a terrible ideas as it seems impossible to keep any of the Riverdale teens inside anyway. They might as well do some good while they’re out there. And it’s fortunate too as Archie and Reg show up just in the nick of time to save Ethel (Justice for Ethel!) from a creepy dude in a van. This makes Archie question if they should be doing more. Cue the real villain in Riverdale . . . 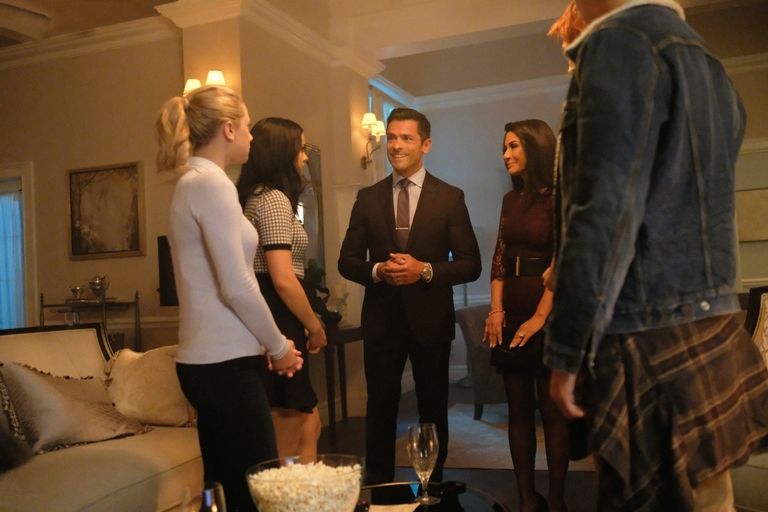 Mr. Lodge is clearly evil. You can tell by the way he dresses, speaks, acts, and threatens. He doesn’t shout or lose his temper. He’s calm and collected and says exactly what he needs to in order to get his point across. He’s a villain through and through. Veronica and her Dad got a little stale this week because, honestly, who cares about your daddy issues at this point? However, Mr. Lodge and Archie is a different story. It’s not just the warning from a father to her daughter’s boyfriend, that’s par for the course, it’s his urging to Archie that he needs to do more, to be more like The Black Hood. Which is exactly what Archie does, bringing together his posse, now clad in red hoods and calling themselves The Red Circle, and makes a Liam Neeson in ‘Taken’-style video, warning the Black Hood that they’re coming for him. I bet the murderer with the gun is shaking in his boots after being threatened by a local ginger and half the high school football team. ​ 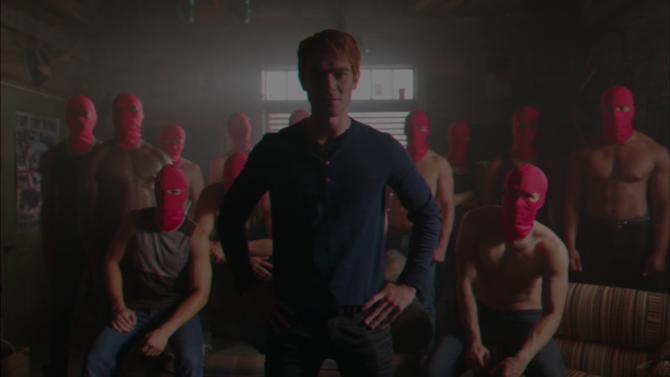 Polly is worth mentioning, only because she’s hopefully gone for a long, long time now. Polly is back, but only briefly as she doesn’t approve of her mother poking the Black Hooded bear. “I’m an unwed mother carrying my cousin’s twins,” is one amnesia away from a soap opera, but it works here because it provides an exit for the less interesting Cooper sister who has now gone to a farm to give birth to her cousin’s twins. Yes, I just wrote those words.

The figurative entry into the woods is performed by Jughead who is now a full time student at South Side High; a complete hell hole of a school complete with drug use, gang members, and teachers who teach but are completely ignored by their students. After pitching to discount Mark Wahlberg, Jughead is given the greenlight to reopen the school newspaper where he plans to break the story regarding gang-related drug dealing. This gets him beat up and he’s forced to decide whether to remain a loner or hang out with his Serpent family. For the life of me, other than for dramatic purposes, I can’t understand why Jughead hasn’t gone back to Riverdale High. And then there’s Toni Topaz, the potential love interference coordinator, and bad girl biker chick who is a solid cornerstone of Jughead’s new world. By venturing into the proverbial woods of South Side, Jughead is walking into a whole world of trouble. 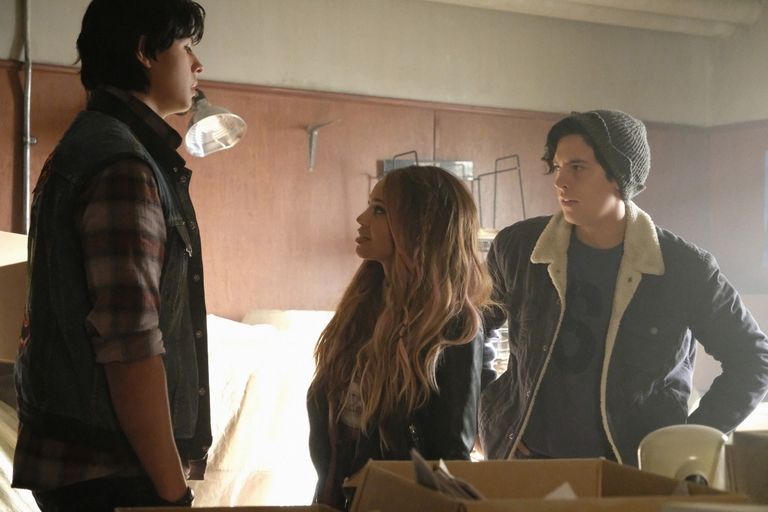 It still feels like there’s a lot going on and I’m a little worried that by stretching the season from 12 episodes to 22, we’re going to be treated to an extremely long and drawn out ‘Who is the Killer’ storyline, but I trust these writers. They’re managing a plethora of characters on a multi-protagonist show that, while not always making perfect sense, is thoroughly addictive.

Now remember, do not go into the woods! It’s full of gay men looking for hookups, potential murderers, and Cheryl Blossom. Until next week . . . 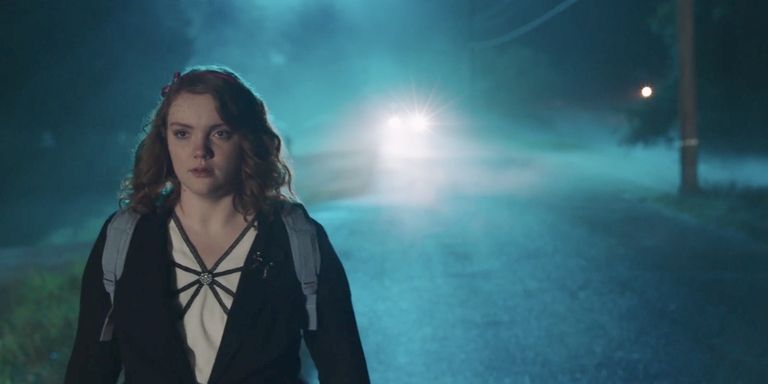