I had a real blonde (Betty) moment today when I suddenly realized that all the titles of the Riverdale episodes are named after movies. I went to film school! How did I not catch that?! But enough about me and my shortcomings. We have another episode of Riverdale to rip to shreds and it’s full of gothic goodness!

This episode served to give us a proper introduction to the Blossom family. Other than Mrs. Blossom bitch-slapping Betty’s mom a couple of episodes ago, most of our experience with what is clearly a very well-adjusted family (of psychopaths) has been through Cheryl. But they’re so much more than we expected! Not only do they live in a creepy mansion on the edge of town, but they’re all evil and crazy. And that grandmother (shudder) . . . what is with Granny Blossom?! But we’re getting ahead of ourselves. Let’s take a look at the other main stories first.

I fully understand that Archie is our main character but the show is truly an ensemble with no actual clear protagonist and it’ll be impossible for every story to have the same impact. For me, Archie’s story is getting a little buried under all the death, drama, and scandals. However, it’s no less heartwarming as our fave teen deals with the dilemma of football vs. music. Veronica points out that we are now living in a PG world – Post Grundy. The shockwaves felt by Grundy’s departure are all purely living inside Archie’s head, and he has a hard time coming to terms with who he is and what he wants to do now that his muse has driven off into the sunset, likely to prey on some other unsuspecting teenagers. Enter Valerie and we have a new female looking to set Archie on a particular path. That’s right, Archie has moved from a cougar to a pussycat (**that was low hanging fruit and I apologize). 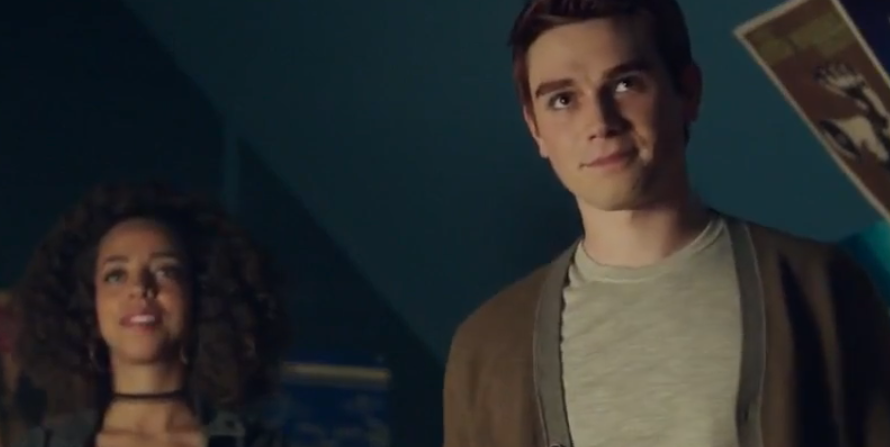 Even in the source material, Archie is a character of choices and balance. Betty and Veronica, Jughead and Reggie, Football and Music . . . he exists in a constant state of decision-making. It was refreshing, and reassuring to see his final decision in this episode to give the captain position over to Reggie. Archie truly is a good guy who really doesn’t want to hurt anyone. That kind of nobility is endearing. And in short supply when it comes to the town of Riverdale.

This is more nitpicky, but the acting in this show is pretty solid across the board with a few people truly shining (Archie’s Dad, Veronica, Jughead) so when someone is missing the mark entirely, it stands out like a dead Jason Blossom interrupting a gay rendezvous. Oscar the college music mentor is the aforementioned metaphorical floating corpse in this episode. His performance was exceptionally wooden and I found the scenes a little jarring. But I digress . . .

Jughead and Betty are in full investigation mode this episode, seeking to hunt down Jason’s killer. I’m disheartened to have to let go of my Betty/Polly split personality theory but it appears the show has proven me wrong. While we haven’t actually seen Polly yet – but wait, what about the home video of Polly as a kid? – You mean the little blonde girl? – Yeah, that one – That could have just as easily been a young Betty! Okay, so I’m having trouble letting go of the theory. Maybe Betty and Polly aren’t the same person. Maybe Betty is just forming a Polly ‘personality’ to let out her dark side ala Norman Bates? But why can’t Betty see Polly? Why did Mr. Cooper lie about Polly attempting to kill herself when she was really engaged to Jason? It still doesn’t add up. And that brings us to what was possibly my favourite scene this week: Enter Granny Blossom! 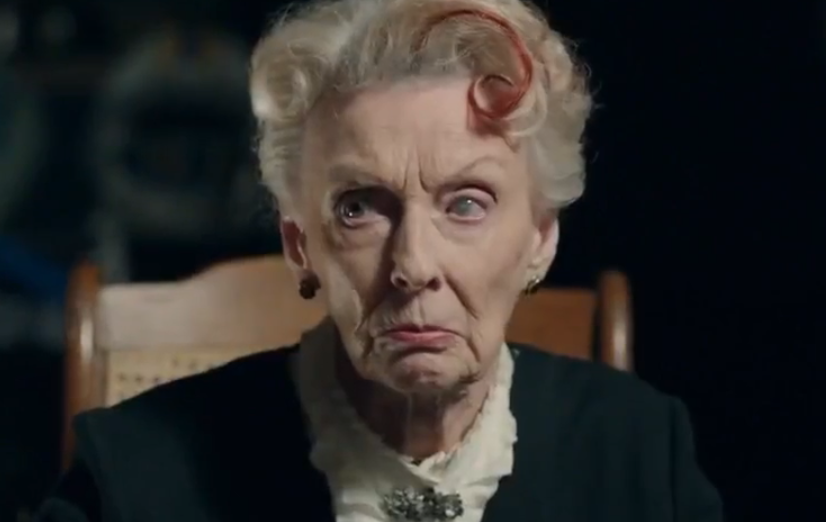 This woman was creepy on a number of levels. Thornhill is already one disembodied hand away from being the Addams Family Mansion as it is! Granny Blossom acts in an expository fashion to reveal two things: 1) Jason and Polly were engaged. 2) Betty and Polly look identical. Maybe because they’re the same person!? (Okay, okay, I’ll let it go) Jughead’s reaction to the old lady rolling out of the darkness (“The horror, the horror!) was beautiful and provided one of the few comedic relief moments of what was otherwise a dark, mist-clad, episode.

Penelope Blossom makes Betty’s mom look like a girl scout leader. From the highly uncomfortable dinner party, to her verbally ripping Cheryl a new one, and her ulterior motive of using her son’s funeral to bring all the murder suspects into one place is downright chilling. Jughead referring to Cheryl as a Gothic Heroine is well-placed because that’s exactly what she becomes in this episode and it’s not just the creepy setting of Thornhill that cements the title for her. Cheryl has her own demons, as revealed by her eulogy, and suffers at the hands of her demented family, and all of a sudden her entire character makes perfect sense. Sadly it means we have to remove her from the list of murder suspects because it now truly makes no good logical sense that she’d have killed her brother who was clearly the only good thing in her world. 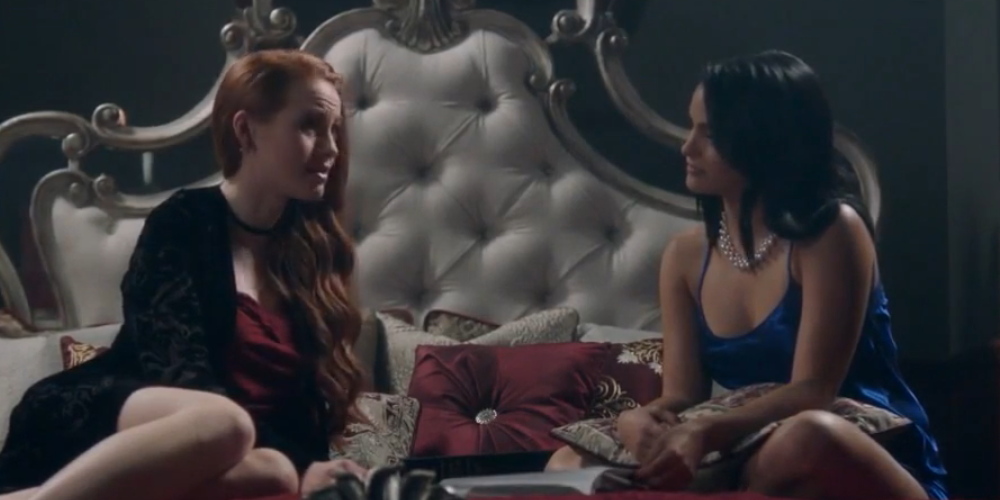 Veronica is finding a place for herself as the town’s do-gooder and while her witty banter and perfect pun delivery is on point, she truly carved out her role as ‘supportive friend’ this week. Normally she plays off of Betty but this time around she becomes Cheryl’s shoulder to cry on and, albeit briefly, a bit of a compass for Archie. It’s her interactions with Cheryl and her ability to relate to the misunderstood rich girl that drives the story forward as the remaining Blossom twin struggles to find the best way to say goodbye to the dearly departed. For someone who is supposed to be shallow, Ronnie constantly shows shades of being the bigger person and it’s an interesting tact for the show’s writers to take. Eventually we’re going to see evil Veronica and I expect it’ll be both spellbinding and devastating.

This was a great gothic episode that highlighted an even darker side of Riverdale and its nefarious maple syrup drenched murderous past. And now I have a craving for pancakes . . .

– Snakes in a Box! Someone call Samuel L Jackson. Scratch that, call Fred Andrews. Know why? Because he continually crushes it on every level. As both a father and a friend, Mr. Andrews represents something noble and hardworking in a town of misfits, thieves, and murderers. And it looks like Hermione is beginning to notice.

– Blood feud and Maple Syrup – Grandfather Blossom killed Grandfather Cooper. One of the few times anyone has been murdered over sticky sugar. Again, someone bring me pancakes. Now!

– “Yeah, KJ, listen, we’re going to need at least one scene per week where you don’t wear a shirt.” 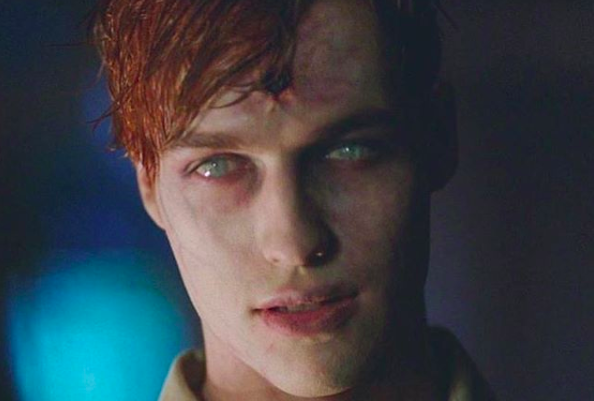