RIVERDALE Recap and Review: (S02E07) Tales from the Darkside

I almost wish every episode of Riverdale was told in this exact same format. Why? A) It’s super easy to review because the storylines are neatly packaged. And B) it was just plain fun. Something that Riverdale has so badly needed after progressively going darker and darker since the beginning of the season. While none of the segments on the Tales from the Darkside episode were fun and cheerful, they did provide a certain amount of levity in the otherwise grim painting that has become Riverdale.

In the vein of George A. Romero’s TV show and movie of the same name, this week’s episode of Riverdale used interlocking and overlapping vignettes to progress the story in an artistic and creepy way. While the show is certainly edging more into horror territory here, it may (hopefully) just be a nod to the genre. Regardless, it was a lot of fun and I enjoyed this episode more than the previous few. The episode opens with the Black Hood making a threat to Riverdale, warning everyone to just lay of the sinning for 48 hours. Come on, guys! You can’t do it (or not do it) for 48 hours? The answer is no, no they can’t.

Let’s break it down and cut it up like a dead deer sitting in a tarp in the back of a pickup truck . . . (too dark?)

Read our recap of the CW Arrowverse crossover event, Crisis on Earth-X

The first story follows the bosom buddies as Jughead is roped into a new gig as chief drug delivery boy for the ominous Penny Peabody. Manipulating our favourite crown-wearing narrator into the job by weaving a yarn about Jug’s dad getting beat up, it’s not long before Jughead and Archie are transporting pancake mix to Greendale in the dead of night. After a blown tire leaves them stranded, a stranger in a pickup offers one of them a ride and takes Jughead out for dinner and regales him with the tale of the Riverdale Reaper. What a shocker. Riverdale had another serial killer on the loose in the past. I bet real estate is all sorts of cheap. 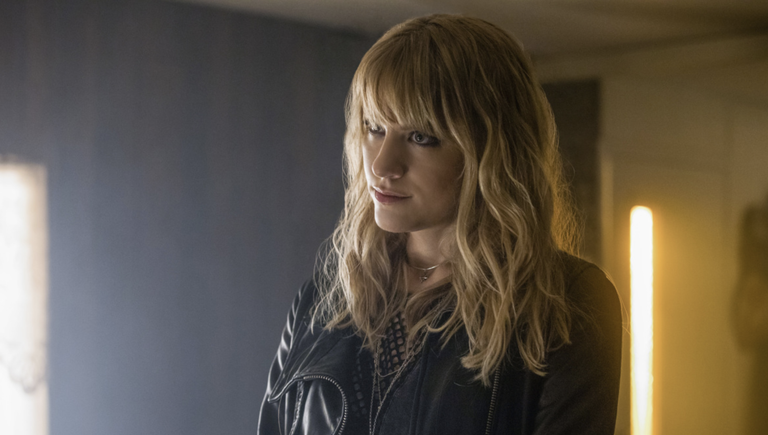 After Archie rescues Jughead from the stranger, they make the delivery and are met with a younger version of the old woman from The Goonies who accepts delivery and informs Jughead that he’s in it for the long haul. When Jug visits his dad and discovers he’s unscathed he confronts Peabody and we discover she’s settling an old debt with FP by using Jughead to deliver drugs. Looks like there’s no way out . . . or is there?

It was nice to see Josie come to the forefront for a change, though her story was probably the one that gained the least traction. Simply because not much happened. Josie has been approached to experiment with a solo career, something she keeps from her Pussycats and pays for dearly later in the episode when they ditch her. Meanwhile, she’s also receiving secret notes in her locker, a stuffed teddy bear, a drawing, and, of course, a pig’s heart. Remember kids, nothing says I love you like the heart of a pig. 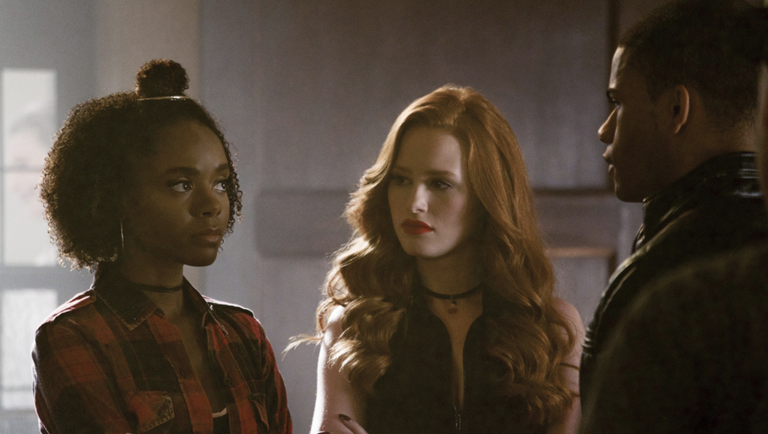 So who is the secret admirer? On the one hand it briefly seemed like Mr. Svenson, and then Chuck Clayton made his return to the show after being ousted in season one for being somewhat of a sexual predator. The new and improved church-going Chuck is determined to win Josie’s heart and takes her to Pop’s for an impromptu date. Much to the chagrin of Mayor McCoy who doesn’t want her daughter hanging around with Chuck. And she’s rightfully on edge having received her own set of death threats since the Black Hood started turning Riverdale into his own little murder playground. After the arrival of the pig’s heart, Josie accuses Chuck and he’s once again sent to the Principal’s office. While his name is later cleared by Keller it leaves us to wonder who is Josie’s secret admirer? As it turns out, it’s not an admirer, more of a manipulative redhead. Cheryl is the one pulling Josie’s strings, though I’m not entirely certain why. Also, where do you get a fresh pig’s heart anyway?

​The final story was a little more fun in the sense that B & V are out to discover just what’s happening with Sheriff Keller. Betty believes he’s the Black Hood and Veronica believes he’s having an affair. Points to Ronnie because she’s absolutely right. After an investigation that involves a nerdy sleep over at Kevin’s house and trailing Sheriff McCoy late at night, we discover he is in fact having an affair with Mayor McCoy.

All these stories happen in the same night or couple of nights and the three groups converge on Pop’s, which is apparently open 24 hours, just in time for the Black Hood to call in to let them know they’ve failed his test and it’s time for the killing to begin again.

At this point it shouldn’t be difficult to find a victim. Just a throw a rock in any which direction and there’s a good chance you’ll hit someone up to no good.

– Chuck Clayton was a comic book artist in the Archie comic books . . . wait, is that meta?

– Almost thought the truck driver was the Candyman. He wasn’t. But he could pass as a great look-a-like. 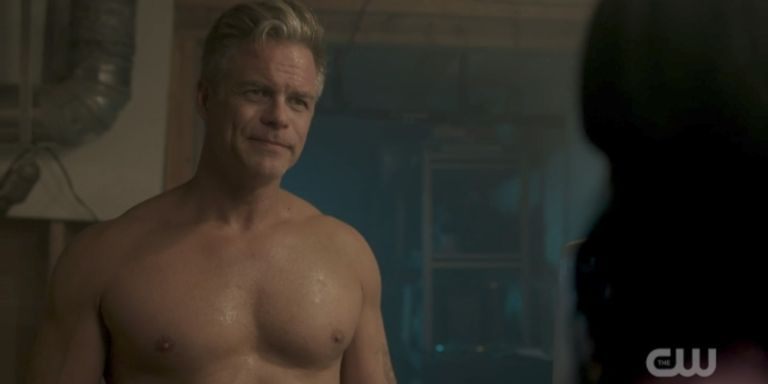