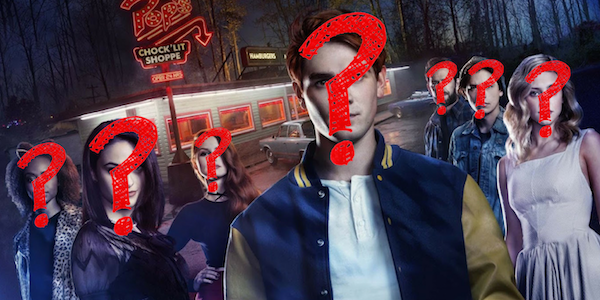 Really, it could still be anyone at this point, but let’s take a look at the main suspects, and then I want to hear from you guys . . . who do you think is the killer?

Cheryl Blossom – Yes, she’s the super-evil redheaded queen of Riverdale, and yes Jason was her brother, and absolutely she was there when he disappeared. But unfortunately Cheryl falls under the ‘too obvious’ category. Plus her little breakdown at the funeral and her tumultuous relationship with her mother all but proves that Jason was the only shining spec of goodness in Cheryl’s life. She’s officially off the list.

Betty/Polly – There’s a lot of evidence stacking up against the Cooper sisters: Betty is on adderall and fails to take her meds (episode 1), she threatens to kill Cheryl (episode 2), she assumes Polly’s identity to torture Chuck (episode 3), breaking and entering (episode 4). But again, isn’t she too obvious to be the killer? Polly on the other hand, while being an obvious choice, we still haven’t seen her yet . . .

Mrs. Cooper – Maniacal and slightly unhinged, Mrs. Cooper is a prime suspect. Her overbearing attitude with Betty and her hatred of gingers (and Veronica) certainly places her well within the realm of potential murderer but I’m not completely sold . . . yet.

Reggie – Reggie was a jerk in the comic books but even more so in the TV show. Could he have been harbouring some jealousy toward Jason? He did jokingly accuse Jughead of killing Jason in episode 2. Could that have been an act of transference to distract people from his murderous deeds?

Mr. Cooper – This creepy guy was high up on my list before the last episode. Up until now we’ve only seen him briefly and he’s always being heavily overshadowed by his wife who is a domineering ‘rhymes with itch’. That sort of pressure, coupled with what we now know happened to his daughter and his grandfather, will make anyone crack. It’s always the quiet ones . . . but with all the evidence stacked against him, his clear motive, and the fact he was the one that ransacked the Sheriff’s murder wall, well now he seems too damn obvious!

Miss. Grundy – Sure, we saw her drive away last week but that doesn’t mean the resident seductress of innocent teens is completely out of the picture. She tutored Jason, and we all know how in-depth her private lessons tend to be. Maybe Jason didn’t like the way she played that cello? Maybe that upset her? Maybe they were having a fling and he threatened to tell?!

Mr. Jones and the Southside Serpents – This almost falls under the ‘too obvious’ category but Jason was kidnapped, tortured, and then shot. For one person to do it all would be a lot of work and a serious time commitment. Jughead’s dear old dad has a team of nefarious bikers at his back . . . coincidence?! Yeah, probably a coincidence.

Ethel – #justiceforethel! This is a bit of a stretch but Ethel was wronged by the jocks and she really, really enjoyed Betty’s torture of Chuck a few weeks ago. Maybe Ethel has a dark side? An underneath, so to speak. See what I did there?

VERDICT? – Until this last episode I was going to call Mr. Cooper as the clear murderer. Now I’m more inclined to lead toward Ethel or Mr. Jones . . .