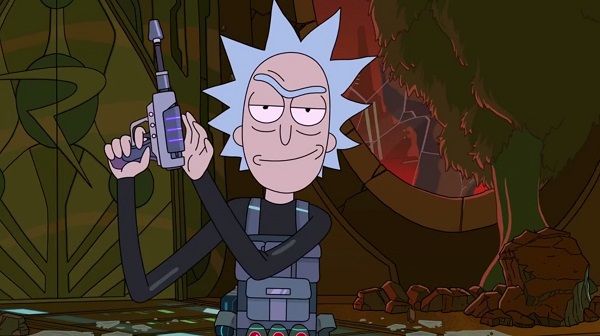 .@McDonalds
you wanna get in on this?
Call me.

And the absolute perfect response:

In case you missed it, the long awaited and greatly anticipated Season 3 premiere of Rick & Morty was available to view on the Adult Swim website over the weekend. As part of April Fool’s, the episode “The Rickshank Rickdemption” would only stream for a limited time on a loop and then it would be taken off.

Spoilery quote below if you didn’t get a chance to see “The Rickshank Rickdemption.”

At the end of the episode Rick promises Morty “the darkest year of their adventures” and reveals his true motivations:

The Szechuan McNugget sauce was a promotional sauce that was a tie-in for the 1998 Disney feature Mulan. Yes, it’s real thing, and yes there is a commercial for it.

While mostly everyone forgot about the special dipping sauce, Rick & Morty did not, and Rick’s obsession with the sauce has resulted in a huge fan-fueled craze that seems to be making some headway. There are now a few change.org petitions available to sign with the most successful one having over 16,500 signatures at the time of this writing.

If you think that there is no way we’ll get this dipping sauce back, there are a couple of things going on that might prove otherwise. One, there is the live-action Mulan coming to theaters in November 2018 and two, Ashley Lutz from Business Insider was able to get a somewhat hopeful response from one of McDonald’s corporate chefs.

UPDATE: If you missed the Season 3 episode, you’re in luck! Adult Swim will be airing the episode every day this week at 7pm PST/EST.