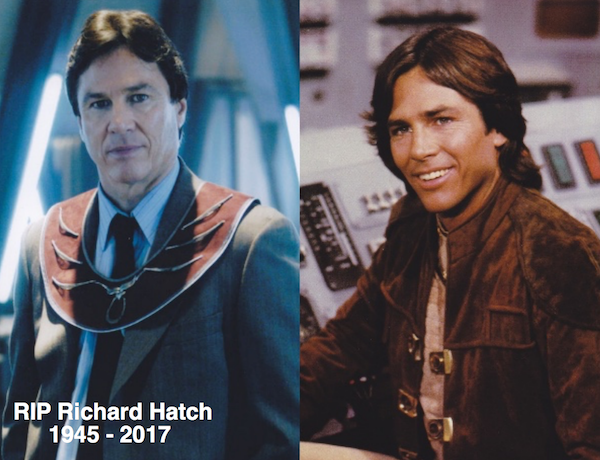 Richard Hatch, best known for playing Apollo in the original Battlestar Galactica series, has died today, his family is reporting. Sources say he passed, surrounded by family and friends after a long bout with cancer.

Born in Santa Monica, California, Hatch was a high school athlete and classical pianist who became interested in acting while in college. He began his TV acting career in 1971 on ABC’s “All My Children”. And though he had a long career with roles on everything from, “The Waltons” to “MacGyver”, he became famous and beloved for creating the role of Captain Apollo Adama, ace Viper pilot and son of Commander Adama, in the original (and short lived) Battlestar Galactica.

After the series was cancelled in 1979, Hatch stayed very active with BSG, hosting panels at conventions, writing a series of novels and comic books based on the universe and lobbying for Universal to re-launch the show. When the series was rebooted in 2003 on SyFy, he was asked to rejoin the cast. This time as Tom Zarek, the populist political pretender and terrorist who leads a revolt against the government and eventually becomes President of the Colonies himself. Hatch took his acting very seriously, teaching classes in Los Angeles and at conventions. His nuanced and complicated performance as, Zarek, was a revelation for many who remembered him as the heroic (and slightly simpler… hey it was the 70’s) Apollo.

He was a constant staple at San Diego ComiC-Con and other geekly gatherings around the country and was well known for his accessibility to fans. He will most certainly be missed.