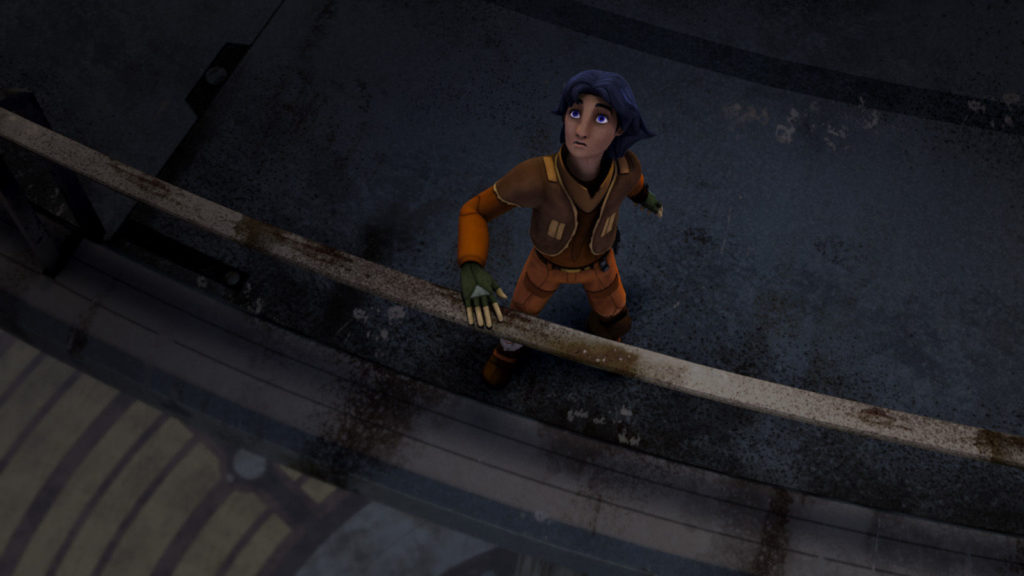 I’m a bad Star Wars fan. Since Disney’s takeover of Lucasfilms, they’ve established what’s canon and what’s now unfortunately not. I never once set foot in the Clone Wars series, which was taken in as canon and has kept away from Rebels. Why? Well, I couldn’t really tell you. Possibly the animation style that I’m not fond of, possibly me being lazy to watch television consistently. But I’m about to change all that by entering the world of Star Wars Rebels leading up to the release of our new live action rebels in Rogue One.

So without further ado, let us trace or retrace the beginning of the Rebellion…

In the first 30 seconds you understand the strength of the Empire with a Star Destroyer flying over our protagonist’s head. We see that Imperial officers harass and abuse their power by taking a local merchant in for treason when he does not have an ID. This also leads us to our protagonist and how he gets by in the city. Grabbing a communicator off an Imperial officer, he diverts their attention elsewhere so the merchant can go free.

While investigating his handiwork, he comes across a heist of crates from the Imperials. Finding his opportunity, he takes off on a speeder with two of the crates. This creates a wild chase between the heist crew and the Imperials. Thwarting the crew multiple times, he finally has to stop when a Tie fighter blows up his speeder. The crew arrives on a ship and offers him a ride, though he doesn’t come without his last crate. And here is where we meet the crew and learn who our protagonist is.

Ezra Bridger had interrupted the crew’s plan, though they’re impressed by him. Kanan, a human and seemingly leader of the group, has two of the crew watch over him. Zeb, a Lasat with a penchant for beating people up, and Sabine, a female Mandalorian who sympathizes with Ezra. Kanan joins the Twi’lek pilot Hera and their droid Chopper as they escape their pursuing Tie fighters and finish their mission; to deliver food to the outcast people of Lothal. Ezra, who has lived on Lothal his whole life, had no idea about the suffering happening on his own planet.

Shocked, he returns to the ship only to hear something calling to him. He finds his way to a bunk, finding a cube that “could be worth something” and a lightsaber. His find is short lived however when Kanan finds him with the lightsaber and tells him to return it to him. Though Ezra tries to explain that the lightsaber wanted to be found by him. Kanan doesn’t believe it. 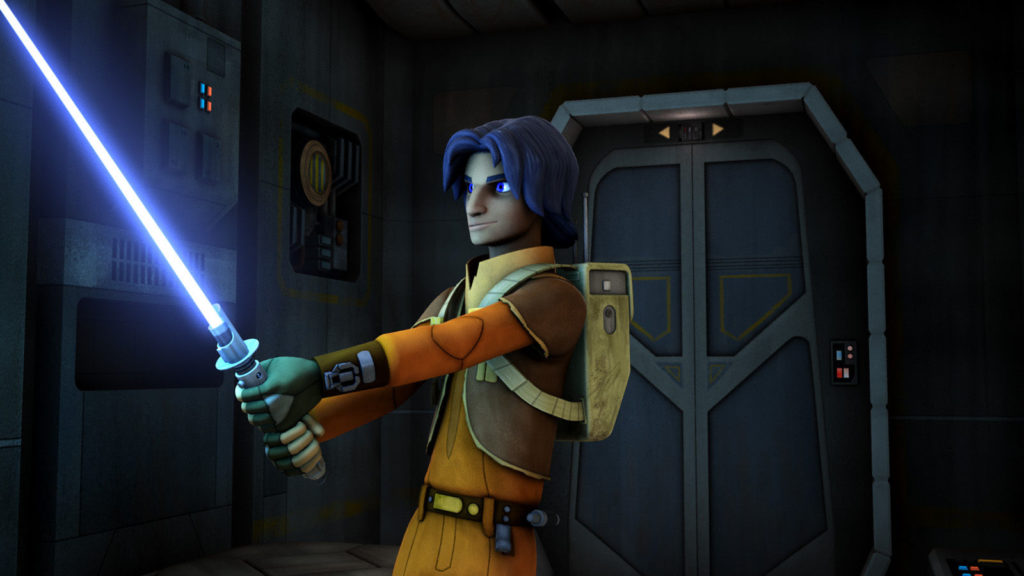 Ezra with the lightsaber

Ezra ends up talking to Sabine, asking about who they are. Sabine simply says they’re a crew and sometimes a family. This sparks an emotion in Ezra, hinting that he may be an orphan, as he diverts his sadness by asking about her family. She replies simply with “The Empire”. This gives us the scope that the Empire has been conquering swiftly and with strength. She’s pulled away when the crew has another mission to discuss – helping Wookiees.

With information given to them by a black market dealer and crime lord, Vizago, they’re told the Empire has several Wookiees captured on a transport ship. Ezra overhears the plan and ends up being dragged into it. Hera uses her wit to get them to dock on the Imperial transport when it arrives but quickly learns it’s a trap. With communications down, she convinces Ezra to warn the crew who had already boarded. Initially, he doesn’t want to, citing that they should escape while they can but eventually decides to warn the crew.

Agent Kallus, of the Imperial Security Bureau, set the trap for the crew, wishing to stamp out any form of rebellion before it happens. Ezra joins Kanan and Zeb as they rush back to the ship. Sabine and Chopper turned on anti-gravity for two minutes, letting them escape. They reconvene and continue to the ship, but Agent Kallus catches Ezra before he’s able to make it through the doorway. Zeb tries to rescue Ezra but gives up, leaving him behind. The crew make it out, thanks to the help of explosives, only for Zeb to confess that he had to leave Ezra behind.

On board, Agent Kallus doesn’t question Ezra, only tells him that he is bait for the rebels. And they’ll return for him. Ezra doesn’t believe this and tells him so, mocking his intelligence. Kallus leaves but instructions the troopers to search him. They take away his bag but Ezra was able to save the cube from them but seeing it as worthless, he chucks it across the room. While he’s in contemplation, the cube begins to open and relays a message from Obi-wan Kenobi. He warns of Order 66 and for all surviving Jedi to trust in the Force. Meanwhile, the crew decide whether to go back for Ezra; Zeb and Sabine being against, Hera and Chopper being for, leaving Kanan as the deciding vote.

Ezra fakes being ill to distract the troopers and have them check on him in his cell, giving him the opportunity to escape. He finds his bag in a storage room along with Imperial helmets of every kind. Putting one of them on, he’s able to listen to communications aboard the ship. He learns that the crew have come back for him and tries to help by diverting half the troops to another level. 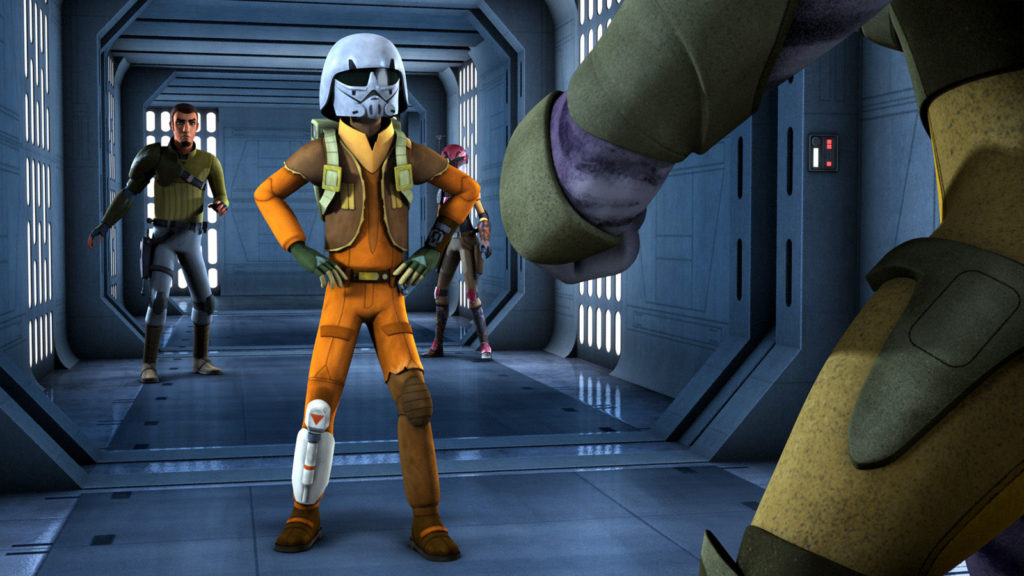 Aren’t you a little short to be a stormtrooper?

The crew lands and goes to rescue Ezra, only to have him pop out of the vents close by. This causes Zeb to punch him, since he was still wearing a trooper helmet. The troopers and Agent Kallus catch up to them but they escape, in part due to Sabine’s explosives again. While he had the helmet on, Ezra was able to learn that the Imperials did have Wookiee prisoners. They were headed for spice mines of Kessel. Ezra encourages the crew to continue the mission to get the Wookiees.

While on Kessel, they find the Wookiees and free them with the help of Ezra, only to have Tie fighters show up along with another ship to stop the crew from escaping. Hera has to fly the ship away from the crew while on the ground holding off the Imperials. Kanan devises a plan to get them away but tells Ezra he’s going to give himself away. Emerging over the shelter they took, Kanan draws his lightsaber to hold off the troops.

Ezra, realizing that he let a young Wookiee be chased by a trooper was wrong and inspired by Kanan’s act of selflessness, he chases after the young Wookiee to save it. The crew and rescued Wookiees are able to get away but Zeb tells Kanan that Ezra had gone to help. Agent Kallus, who also noticed Ezra’s chase, corners him and the young Wookiee, saying he’s found an apprentice Jedi. Ezra scoffs and says he works alone before Kanan and the crew rescue him and the Wookiee. 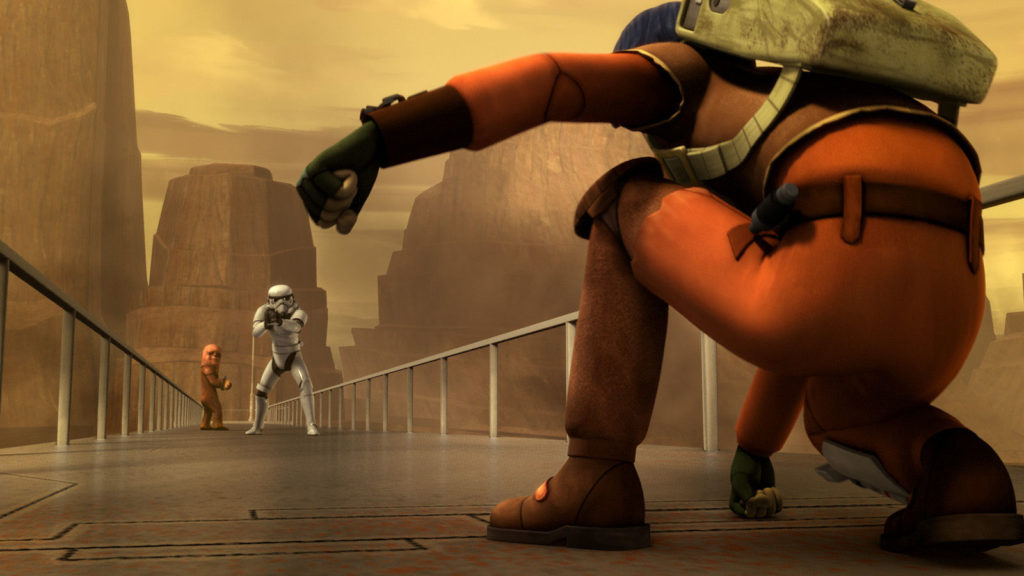 Aboard, there’s a happy reunion between the young Wookiee and his family. This prompts Ezra’s sadness once more and realizes he wants to be apart of the crew. He takes Kanan’s lightsaber once more and says goodbye to the crew begrudgingly when they land on his home planet. He returns the cube to Kanan, now revealed as a Holocron, and goes back to his tower he’s been living in. Hera remarks that Ezra was able to open the Holocron and passed the test.

Ezra looks around his home before asking what the Force is. Kanan, who had been standing behind him, explains that the Force is everywhere and that it is strong in him. At this, Kanan offers him a deal: either keep the lightsaber and stay at his home or give the lightsaber back and be trained in the ways of the Force. Kanan leaves before Ezra can answer and returns to the ship, listening to Obi-wan’s message again in the Holocron. His message of hope is carried over the images of the crew getting ready to take off on their next mission and Ezra’s appears to Kanan. They silently accept one another.

Agent Kallus reports to The Inquisitor that the rebel cell he’s been tracking is being led by a Jedi. The Inquisitor is very pleased with this news and we’re given the idea that The Inquisitor will be their main adversary.

This 41 minute long episode was a mini movie to get the audience familiar with the story and characters and it definitely delivered. They balance a bit of fun and jokes while introducing a diverse cast of characters that were fun to watch and opened the world of Star Wars a bit more. And though it was a mini movie, they are technically episodes 1 and 2 of Rebels. We’ll see their adventures continue in episode 3! So until next time…