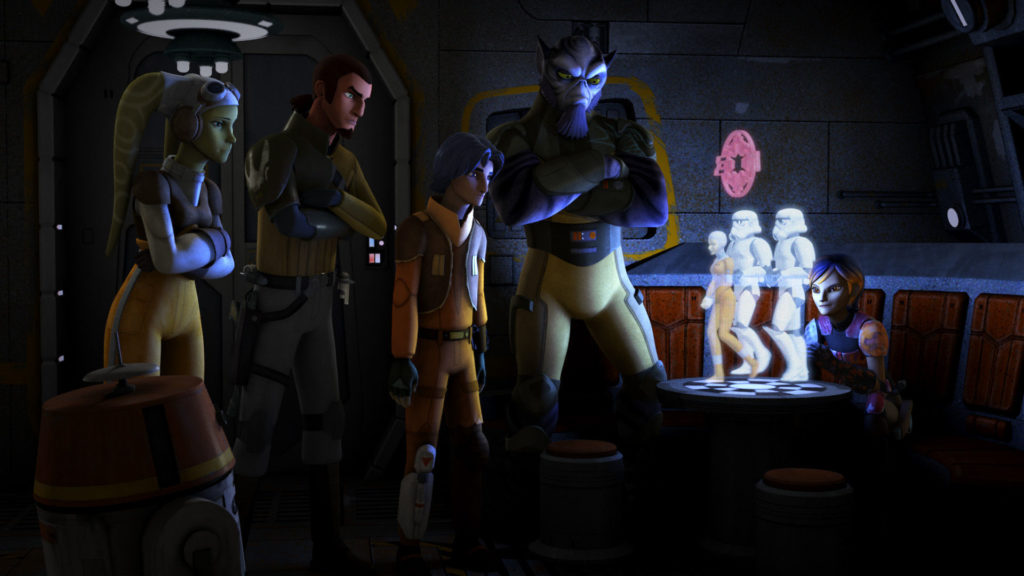 We see Ezra struggling to do a handstand on a gun turret on Ghost, with Zeb and Chopper watching on. Kanan instructs Ezra to focus, to which he replies that he’s trying. He says to “do or do not, there is no try”, which Ezra says doesn’t make sense. Kanan admits he doesn’t really understand it either but Master Yoda had said it a lot. With Ezra frustrated at the distractions, Kanan switches to something else. Giving Ezra the lightsaber, he tells him to close his eyes and concentrate before instructing Chopper to throw things at Ezra. Getting hit in the face and body, Ezra fails, delighting Zeb, who starts to dump the whole bucket of supplies on Chopper to throw. This knocks Ezra back, slipping off the ship and falling into the clouds.

Kanan uses the Force to lift him back to the ship but is upset with Ezra, saying he’s hard to teach. Their conversation is interrupted when Sabine shows them the Imperial transmission that Senator Gall Trayvis reports. Jedi Master, Luminara Unduli, is still alive and being held on trial. This excites the crew into rescuing her with Kanan mentioning that she would be a great teacher to Ezra. But Ezra is upset that Kanan would pass him off to a stranger to be taught.

Leaving Chopper behind on the Ghost, the crew takes a smaller shuttle to the Imperial prison. Kanan takes care of the two troopers blocking the door they need to enter. Ezra is inspired by Kanan and jumps before he was supposed to go. This causes him to slam into the door, angering Kanan telling Ezra that actions like that could put the entire crew into jeopardy. Zeb and Sabine land in time to take out the other troopers that have arrived and they go inside the prison. 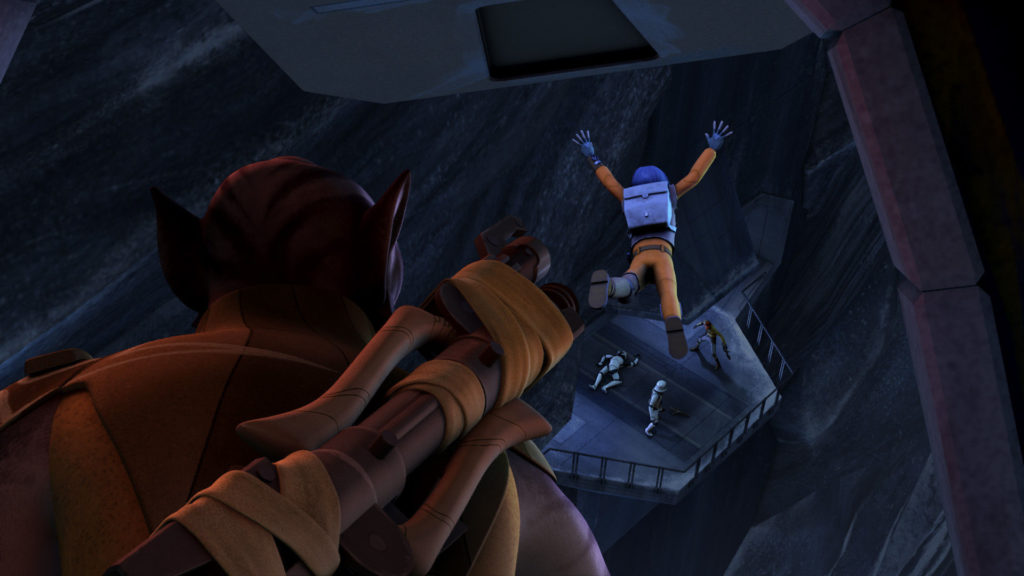 Kanan can sense Unduli but says that it’s clouded. Sabine tracks her to a cell on the lower level, which is not what the crew had planned for. They change course and head down. Hera, meanwhile, is waiting in the ship when a winged creature passes by, startling her. The creature gets close and starts hitting the ship as another arrives and hits the ship. As yet another one approaches, Hera realizes the ship is sending out a mating call to the creatures and has to abandon her post, the creatures following her.

Kanan and Ezra reach the cell only to find that Unduli is not alive but her bones are kept, leading Jedi to find her. The Inquisitor has arrived and tells them this, drawing out his red lightsaber and telling them who he is. Kanan and The Inquisitor enter a duel, leaving Ezra to watch. The Inquisitor taunts Kanan about his former master, noting his fighting technique. Ezra devises to distract him. With a bomb he had, Ezra and Kanan escape the room, with The Inquisitor right behind them. Sabine realizes that their communications are down and that it was all a trap, knowing stormtroopers will be there when they go the way they came. 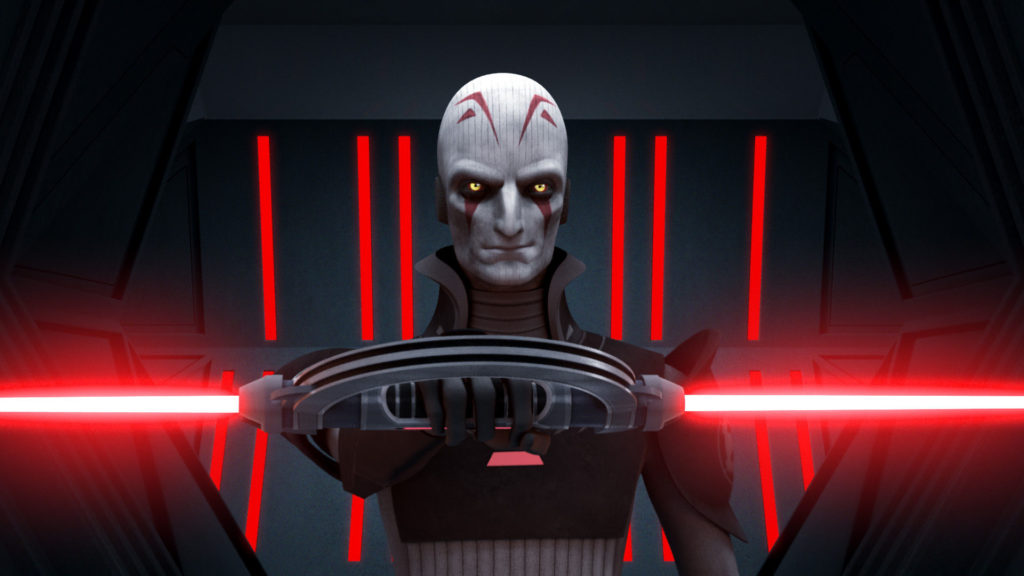 The Inquisitor shows he has a dual red lightsaber and continues to fight Kanan. He tells Ezra that the Jedi are dead but there’s another path – The Dark Side. Ezra uses his slingshot bolt at The Inquisitor to no use, as he Force pushes Ezra into a wall. He questions Kanan if he ever taught him anything and asking if he thinks he can save Ezra. Kanan says he’s not making deals and continues the fight, only to be knocked back by The Inquisitor, putting Ezra in the middle.

He gives Ezra the choice, saying Kanan is unfocused and undisciplined, the same thing Kanan told Ezra he was earlier. Unfazed, Ezra says that means they’re made for each other and stands against The Inquisitor. Kanan uses the Force to push The Inquisitor to the ceiling, giving Ezra the chance to run. The Inquisitor rises, showing that not only does he have a dual lightsaber, but the blades can spin. Ezra asks if Kanan’s saber can do that as they escape.

Meeting up with Sabine and Zeb, they run to their new escape route, only to have The Inquisitor hot on their trails, ordering a lockdown. They’re able to separate however and the crew make it to the platform. Sabine is unable to open the door as her systems have been knocked offline. Ezra can’t open the door on his own, so Kanan instructs that the two of them open the door with the Force. They’re successful, only to find the platform covered in stormtroopers who immediately begin firing on them.

As The Inquisitor is breaking through the doors, Zeb throws his grenade to give them a little leverage in the fight and Hera arrives with more of the creatures. As their making a break for it, The Inquisitor breaks through and hurls his spinning lightsaber at the crew but Kanan is able to deflect it away. The crew get away, but not before Zeb asks Kanan if his lightsaber does that. 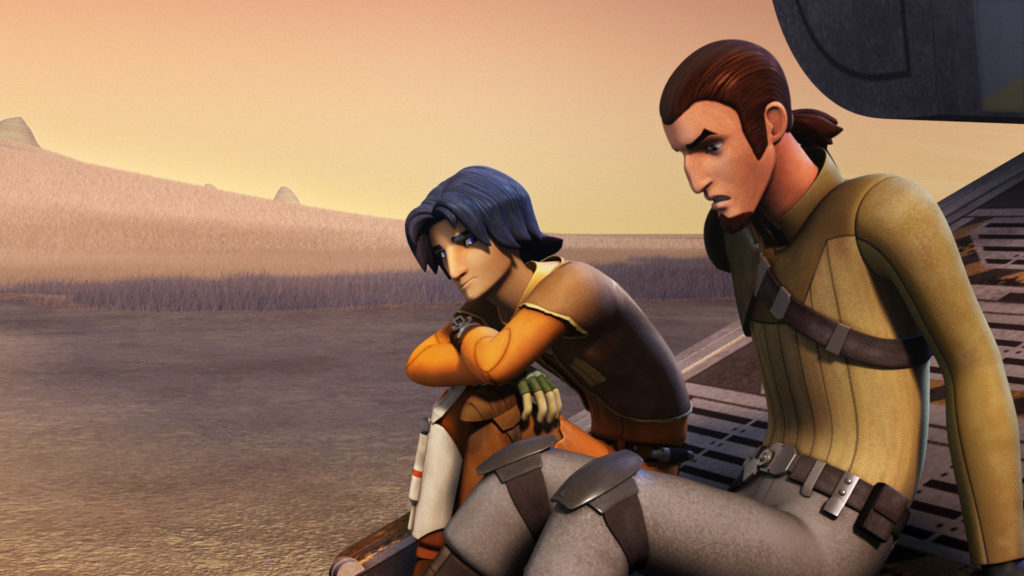 Hera learns about Unduli and asks Kanan how Ezra’s taking it. Kanan says not as bad as he is himself and that Ezra is stuck with him. Ezra, able to overhear this, is disappointed. Landing on Lothal, Ezra sits and frowns before telling the approaching Kanan that he’s letting him off the hook for wanting to dump him off on Unduli. Kanan tells Ezra that he only wanted the best teacher for him. Ezra argues that he wants Kanan as his teacher. This shocks Kanan for a moment before he tells Ezra that he won’t try to teach him anymore, that he will teach him. Even if they both fail. Ezra acknowledges him as his Master and they train.

This episode had a lot more going for it compared to the previous episode. The Inquisitor makes for a compelling villain. Trying to seduce Ezra to the Dark Side, being formidable with a lightsaber and being genuinely intimidating. Another callback with the “Do or Do Not”. It seemed to be there as a joke initially but also used as a genuine teaching method for both Kanan and Ezra. So I’m less upset with the reference this time around. Now that Ezra’s Jedi training has officially started, I’m looking forward to see how much Kanan will be able to teach him. So until next time…
May the Force Be With You, Always.