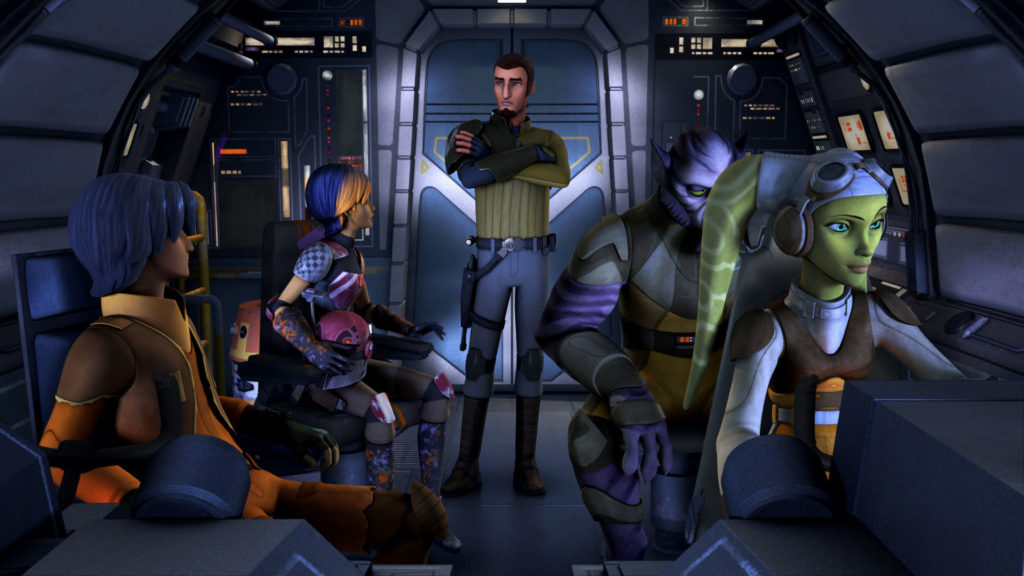 The crew discuss that they need to make money, since they’re low on everything. Kanan has a job from Vizago, the crime lord who gave them the tip about the Wookiees and Imperial crates from the first two episodes. Zeb is against the job but Ezra says for food and more Jedi training for him, he’ll do it. Hera needs little convincing and they go to a space port and board a transporter. An Aqualish and Imperial Minister board. The Minister demands to know where the translators are after she can’t understand the Aqualish. R2D2 and C-3PO board the ship.

The crew cause a distraction which sends all the droids to the back of the craft, leaving the Minister without a translator. Zeb, who is sitting behind the Minister, tells her that his ward, acting by Sabine, can speak Aqualish. The Minister tells her to ask where the cargo is being held and Sabine tells her Bay 17. They arrive on the planet and split up, after knowing they’re really in Bay 7. Ezra complains that he still isn’t being taught as a Jedi and just continues to thieve. Kanan has him focus on the mission. Using Force Leaps and the vents, Ezra is able to let the crew into Bay 7. They load up the weapons, T-7 Ion Distruptors, into their ship, Ghost. The Minister, being told the weapons are actually in Bay 7, grows suspicious after Chopper tries to keep them off by fighting with R2D2. She sends the troopers to Bay 7 immediately.

Zeb and Kanan hold off the troopers while Sabine and Ezra get the last of the weapons onboard. Chopper leads R2 and 3PO onto the Ghost and they take off. Zeb tries to convince Kanan to get rid of the weapons entirely but Sabine mentions that she overheard that they were only prototypes, so the Empire could have mass produced them. Kanan sees it as a profit to sell them and get them out of the hands of the Empire but Zeb is still worried. R2 records this conversation between the three. The Minister reports the crew to Agent Kallus, specifying Zeb and citing that she didn’t think there were any Lasat left. 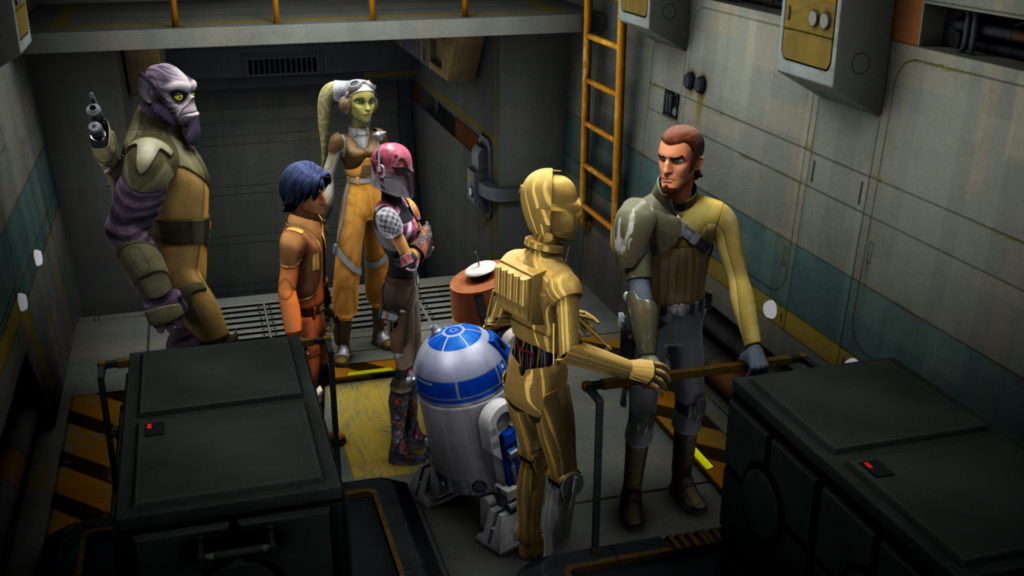 C3PO tries to convince Kanan to let them go

Zeb kicks Ezra out of their room and Ezra goes to see Hera where she explains that the T-7s destroyed most of the Lasat and that there are not many left which causes Ezra to feel sorry for being upset at Zeb. Hera then asks how his Jedi training is going, which Ezra says he hasn’t gotten any. They arrive at Lothal to make the trade with Vizago but 3PO calls a distress signal that gets rerouted to Agent Kallus and the Imperials arrive to take back the weapons. Vizago takes off with half the load and doesn’t pay them, leaving the crew to deal with two walkers and a troop. Kanan orders Sabine to destroy the weapons while he takes on the walkers. The crew scramble as the troopers advance.

Agent Kallus calls out Zeb, taking out a weapon that looks like Zeb’s own weapon, which enrages him and they fight. Zeb says that the Bo Rifle is only for the Lasat Honor Guard, which Agent Kallus tells him that he took it off a Guardsman himself as he was there for the fall of the planet. Sabine is able to get the weapons ready to overload and they push them towards the remaining walker and the troop that’s arrived, causing a mass explosion that knocks everyone over. This gives Agent Kallus the advantage and brings Zeb to his knees, about to kill him. Ezra rouses in time and uses a Force push against Agent Kallus, knocking him out. Amazed and confused by his power, Ezra stares at his hands as Kanan orders Hera and Sabine to get everyone on board as he goes to Zeb and helps him on board. 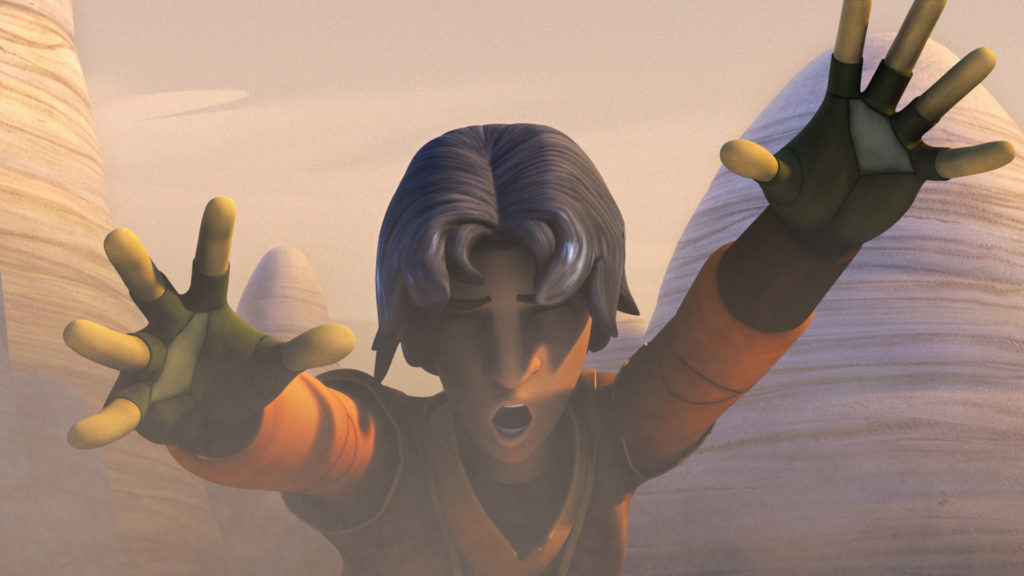 Ezra saves Zeb with The Force

The crew returns R2 and 3PO to their rightful owner, Bail Organa, who is happy to have them back. He says “The simplest gesture of kindness can fill a galaxy of hope”, causing Kanan to question him on his use of the Jedi quote. He leaves and Bail Organa asks to see R2s recordings of the rebels. 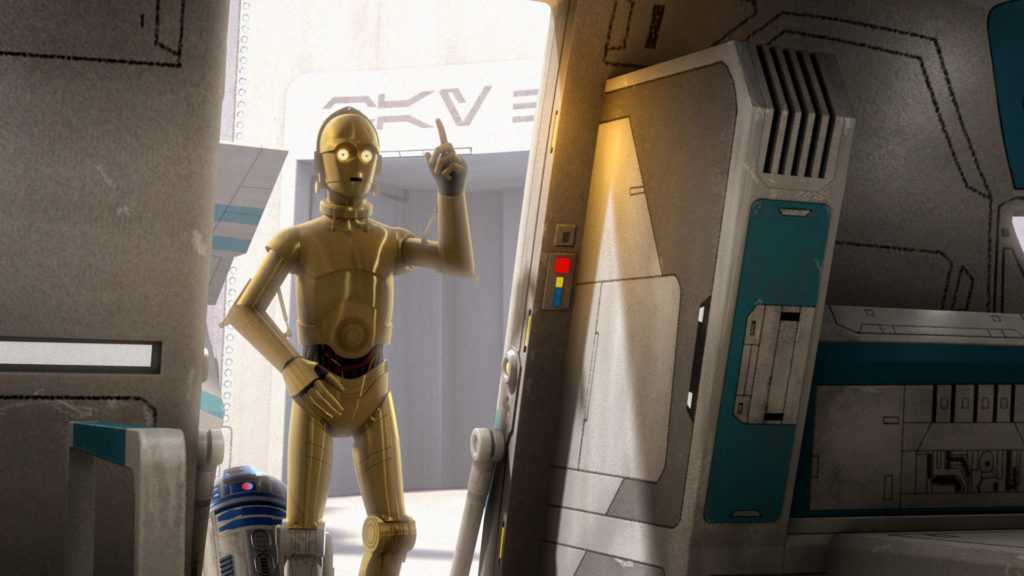 I won’t lie, I had a mixture of happiness and slight annoyance when R2 and 3PO came on the screen. Initially I was happy and squeeing inside that they were there, especially C-3PO being voiced by Anthony Daniels himself. But I couldn’t help feeling that they were shoehorned in to get people excited but also depending on them to make the show work. As though they couldn’t tell their story without use of beloved characters already long introduced. That may just be pessimistic of me though. A solid episode, continuing to bond these characters together. So until next time…